How accurate are analyst annual EPS projections one year in advance? 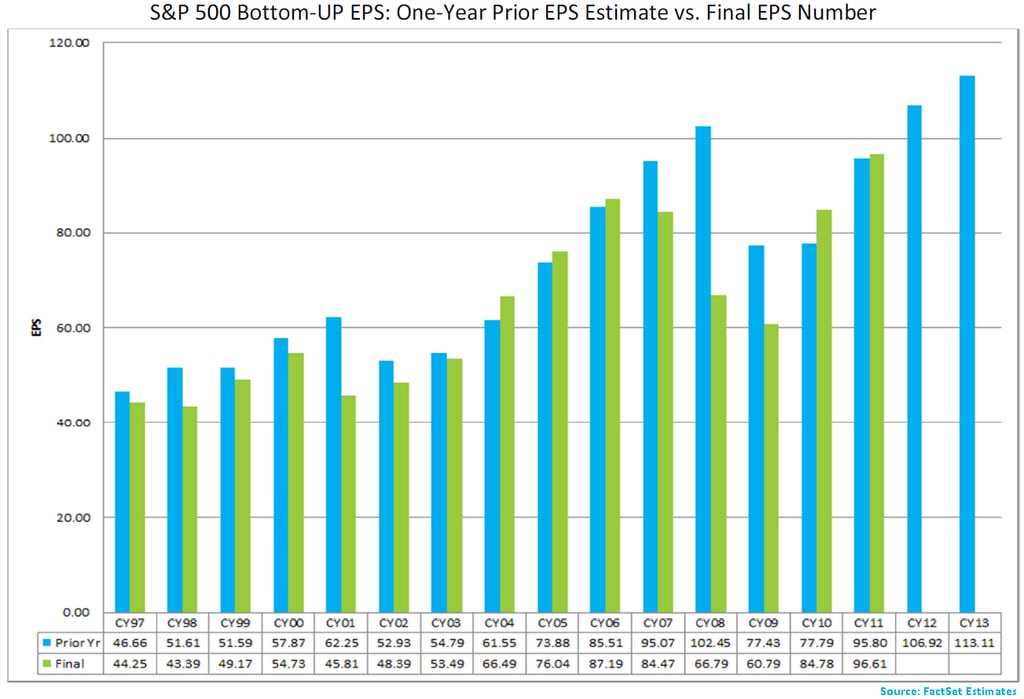 However, this 10.3% average includes three years in which there were substantial differences between the bottom-up EPS estimate at the start of the year and the final EPS number: 2001 (+35.9%), 2008 (+53.4%), and 2009 (+27.4%). Using the median instead of the average, the median difference between the bottom-up EPS estimate one year prior to the end of that year and the final EPS number for that year has only been +5.5% over the past 15 years.

Despite the reductions in estimates, analysts are still calling for a return to earnings growth in Q4 (2.4%) after a decline in Q3 (-0.9%). Seven of the ten sectors are projected to report earnings growth for the quarter, led by the Financials sector (15.5%) sector. On the other hand, the Industrials (-4.6%), Information Technology (-2.8%), and Health Care (-2.6%) sectors are predicted to have the weakest earnings growth. In the Information Technology sector, Apple is predicted to report a year-over-year decline in EPS for the first time in over nine years. The current revenue growth rate for the index for Q4 is 2.1%, below an expectation of 2.7% growth at the start of the quarter. Slower economic growth in Europe and emerging markets countries (China) and less favorable foreign-exchange rates are expected to have a negative impact on both top-line and bottom-line growth for many multi-national companies in the index in the quarter. In addition, some companies have cited the damage caused by Hurricane Sandy and fiscal policy uncertainty as impediments to earnings and sales growth for the quarter as well.

The upcoming week marks the start of the fourth quarter earnings season, as Alcoa is schedule to announce earnings results on January 8. However, it will be a light week in terms of the overall number of companies reporting results, as just four other S&P 500 companies are expected to release earnings numbers during the week.

Why the Nordics Continued to Rule European IPOs in 2020

By Torstein Jakobsen  |  Companies and Markets