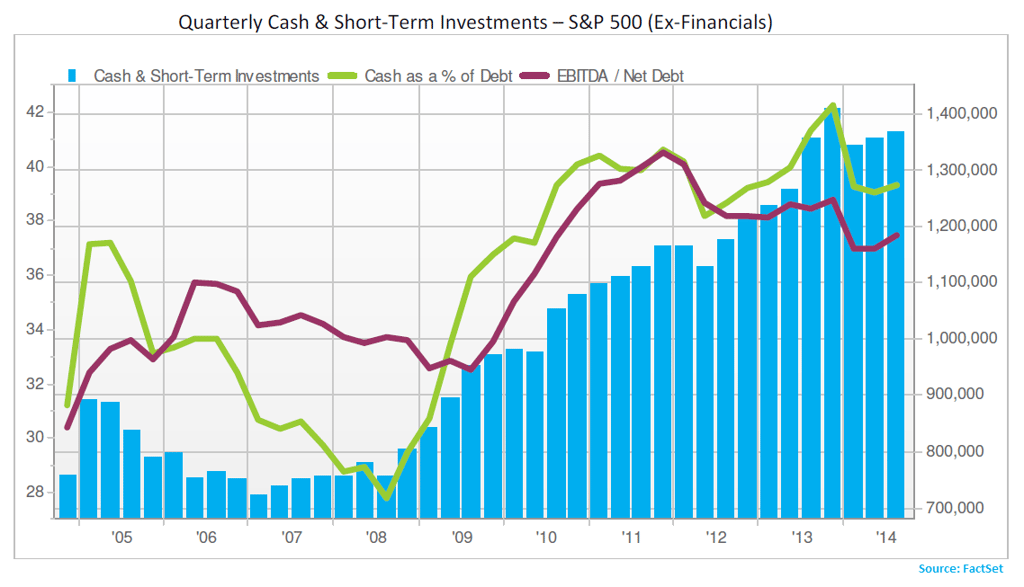 On the other hand, the Telecom Services sector had the largest decrease in cash balances for Q3 at -74%. This sector also had the lowest cash balance (ex-Financials) at $15.4 billion. Verizon was the largest contributor to the decline in cash for the sector. The company recorded a $49.5 billion drop in cash balances compared to the year-ago quarter.

Capital expenditures (“CapEx”) for the S&P 500 (ex-Financials) grew to 5.7% in Q3, which was consistent with the year-over-year growth rates report in Q2 (4.9%) and Q1 (6.0%). In terms of year-over-year growth in CapEx at the sector level, eight sectors reported an increase in CapEx, led by the Information Technology sector. The only sector that reported a decline in CapEx in Q3 was the Telecom Services sector.

The Information Technology sector reported the highest growth in CapEx at 21.4%. Apple was the main driver of the increase in CapEx growth for the sector. The company spent $3.83 billion on CapEx in Q3 2014, compared to $1.95 billion on Q3 2013. Micron Technology was also a substantial contributor to the rise in CapEx, as the company spent $1.14 billion in Q3 2014 relative to $280 million in Q3 2013.

The Consumer Discretionary sector witnessed the third highest growth in CapEx at 7.9%. Companies in the Automobiles (General Motors, Ford) and Media (Time Warner Cable, Comcast) industries saw some of the largest year-over-year increases in CapEx, along with Amazon.com.

On the other hand, the Telecom Services sector was the only sector to report a decrease in CapEx (-7.5%). AT&T was the largest contributor to the year-over-year decline, as the company spent $733 million less in Q3 2014 relative to Q3 2013.