Dividends per share (DPS) grew 11.3% to $37.99 in the trailing twelve-month (TTM) period ending in October. This marked the 15th consecutive quarter in which DPS for the S&P 500 has grown at double-digit rates. Over this 15-quarter window, DPS for the index has seen average growth of 14.2%. At the sector level, nine of the ten sectors recorded growth in DPS over the prior 12 months. Six of these nine sectors recorded double-increases in DPS growth: Consumer Discretionary (18.8%), Financials (17.6%), Telecom Services (15.5%), Energy (14.6%), Information Technology (13.6%), and Industrials (12.2%). The only sector that recorded a decline in DPS over this period was the Materials sector (-6.6%). While the Consumer Discretionary has consistently been one of the top sectors in terms of DPS growth in recent quarters, the third quarter marked the first time this sector reported the highest DPS growth of all ten sectors over the prior 12 months since Q4 2010 (27.9%).

The number of companies paying dividends in the TTM period was 421 (or 84% of the index) at the end of October. Overall, 337 companies increased their dividend payments over the past 12 months.

Examining the individual drivers of longer-term, trailing DPS growth captures a wider cross-section of the economy. Several companies from a variety of industries have been remarkably consistent in boosting their DPS payouts. For example, Diamond Offshore Drilling, Seagate technology, and Lockheed Martin were among the highest companies by compound annual DPS growth over the ten, five, and three year horizons (23.1%, 44.0%, and 21.9%, respectively). Wisconsin Energy was also noteworthy for being among the ten companies with the highest three, five, and ten-year annualized DPS growth rates.

It is interesting to note that the estimate for DPS growth over the next 12 months (NTM) is 8.3%. While all ten sectors are projected to report growth in DPS over this time frame, only the Financials (14.8%) and Consumer Discretionary (10.3%) sectors are expected to report double-digit growth in dividends. As noted in last quarter’s report, it appears dividend payments for the Financials sector have not yet fully recovered from the financial crisis, resulting in higher growth expectations going forward. The Financials sector is currently the only sector in the index still reporting DPS on a trailing 12-month basis below the 10-year average for the sector. 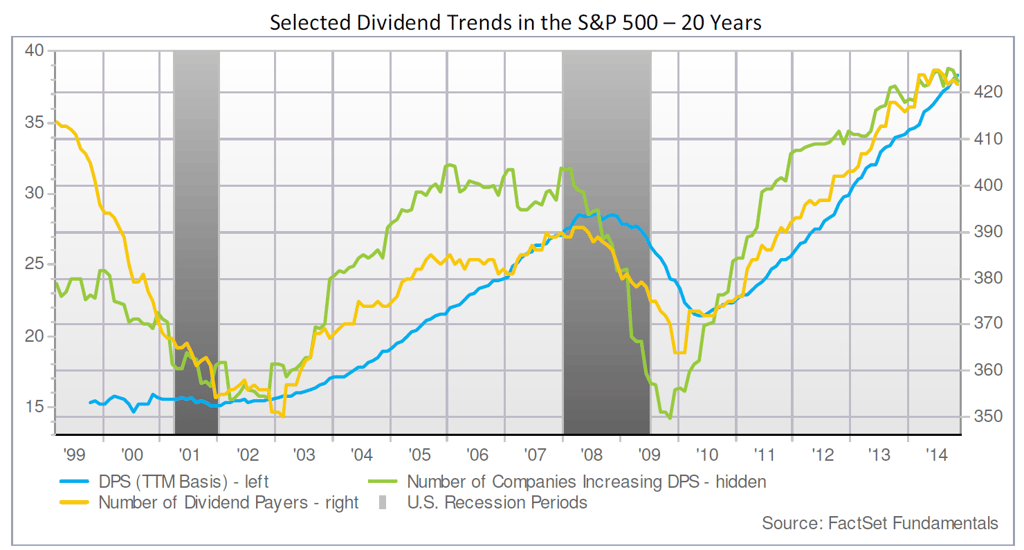 Read more about the dividend trends of companies in the S&P 500 in this quarter's edition of FactSet Dividend Quarterly. Visit www.factset.com/dividend to launch the report now.