After a record-breaking year for shareholder activism in 2015, the topic has continued to make waves in 2016. Activist campaigns, such as the ones between Elliott Management and Cognizant Technology Solutions or Pershing Square and Chipotle, are capturing headlines. With that said, it’s not just the business media covering this topic; the investment community has certainly taken notice as well. it is no longer uncommon to see investment banks with specialized groups dedicated to takeover defense or large asset managers classifying activism as its own unique asset class. As a result, it is becoming more and more important to stay on top of trends within the activism and governance space.

Watch Andrew Birstingl and Senior Content Manager of FactSet SharkRepellent data Mike Coronato in our Analyzing Trends in Shareholder Activism webcast, where they discuss the trends that unfolded in 2016 in the activism and governance space. 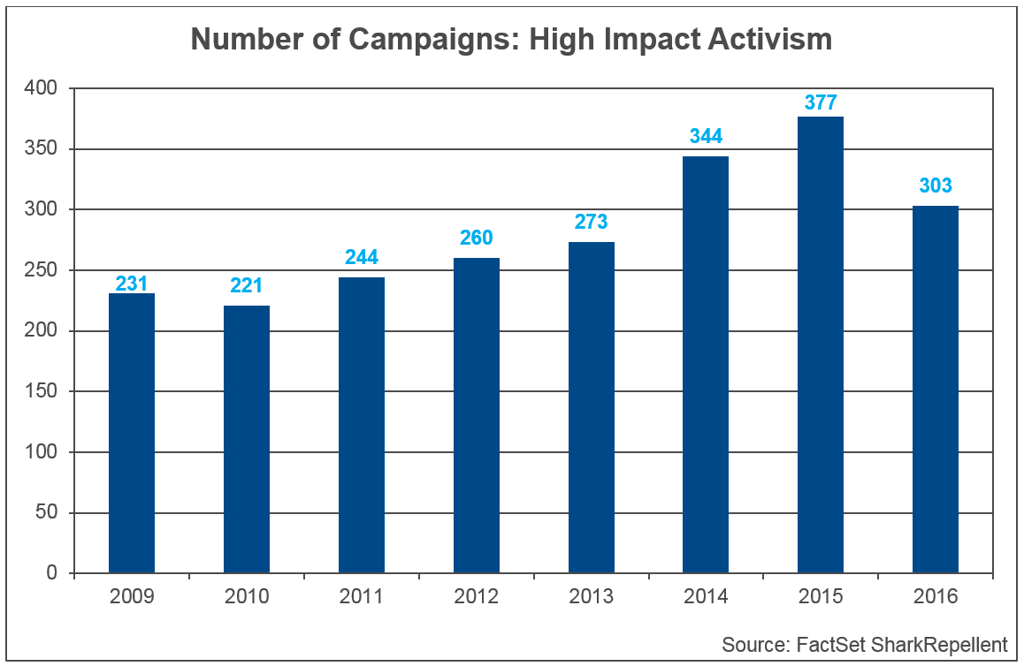 Updated statistics on the number of high impact activist campaigns can be found daily on the Wall Street Journal-FactSet Activism Scorecard.

It is interesting to view and understand how the target companies of these activists have evolved over time. During 2015, activist investors chased large and mega cap companies in record numbers. There were 32 campaigns against U.S. companies with market values greater than $10 billion, which made up about 8% of the total campaigns for that year. During this year (through the end of November), the count of campaigns launched against companies fitting that same criteria was only 17, which represented just 6% of total campaigns.

Despite the decline in campaigns against the big guys, activists seemed to continue doing what they have always done, which is focus on the small cap companies. Back in 2009, 91% of all campaigns were against firms with market capitalizations under $1 billion. That figure is lower today, but will have increased for the fourth consecutive year at the end of December. In 2016, 75% of total activist campaigns involved firms with market values less than $1 billion, which represented an uptick from 71% in 2015.

So what do activists want? The top demand sought by activist investors in 2016 was board seats. This has also been the case historically, as attaining seats on the Board of Directors is the best way for activists to ensure their agenda is considered. The push for board seats has made up about 19% of the total demands so far this year.

Returning cash via buybacks and dividends hasn’t been a primary demand on activists’ agendas in 2016. It made up 5.5% of the total demands this year, which was a drop from 7.6% in 2015 and 7.7% in 2014. Many companies are initiating a dividend or starting a repurchase program on their own, making it unnecessary for activists to push for this. One demand on the rise has been compensation. Compensation-related demands represented 8.3% of total demands this year, which was an increase from 6.4% in 2015 and just 5% in 2014, egregious executive pay practices combined with an underperforming stock could very easily lead to an activist knocking on the door.

We looked into proxy fight statistics to see if the trend of increasing activist influence at U.S. corporations continued this year. As of the end of November, the number of proxy fights for board seats was at its highest level since 2009, at 101 contests. Similarly, the 33 proxy fights that went the distance in 2016 also marked the highest total since 2009. The company win rate for those board seat proxy contests that went to a shareholder vote stood at approximately 67%. This represented an increase from the win rate in 2015 of 54%.

The other part of the story is that settlements continued to rise this year. As of the end of November, 48 proxy fights were formally settled (or were withdrawn after the company made material concessions), which marked the highest number in any year since FactSet began tracking proxy fights in 2001. Proxy fight settlements have risen every year since 2013. Additionally, many companies are still choosing to grant board seats to activists before the campaign evolves into a proxy fight situation. So far this year, 71 non-proxy fight activist campaigns resulted in at least one board seat, which was the second highest count on record after 2015 when 87 non-proxy fight campaigns led to a board seat. It would appear that companies are more willing to grant seats to activist investors than ever before. At the same time, they are getting better and better at picking their battles.