Volatility returned to global equity markets in a dramatic way at the end of 2018 and is carrying over into 2019. Concerns about global economic growth, particularly in China, are driving the uncertainty. What U.S. data should we be looking at as we begin 2019?

How Long Can the U.S. Consumer Remain Positive?

Consumer sentiment had been on a steady upward march since the middle of 2016 but the December reading saw a retreat. According to the Conference Board, consumer confidence reached an expansion peak of 137.9 in October 2018 before slipping back to 128.1 in December. The surge in consumer sentiment went hand-in-hand with a remarkable period of growth in U.S. equity markets. As of early October, the S&P 500 was up more than 9% for the year; however, things turned south dramatically in December, leaving the index down 6.2% for the year.

Yet consumers remained enthusiastic through the 2018 shopping season. The December 2018 Redbook index of retail sales at department and chain stores was up 7.7% on a year-over-year basis; Redbook’s weekly index jumped 9/3% y/y at the end of December. But sustained weakness in the stock market is likely to pull down the January consumer sentiment number and this could hurt retail sales. With the economy already taking a hit from the combination of a worsening trade deficit, the waning positive impact of tax cuts, and a weakening housing market, a discouraged consumer is not a good thing.

The Housing Market Continues to Weaken

As predicted earlier this year, the U.S. housing market is slowing as the result of several factors. First of all, home builders are facing soaring input costs, both for materials and labor. The combination of lumber tariffs and tight labor markets have pushed up the cost of new homes. On top of rapidly rising house prices across the country, the Federal Reserve instituted four quarter-point rate hikes in 2018, increasing the cost of financing a home purchase. At the beginning of 2018, the average 30-year mortgage rate was just below 4.0%; by mid-November, the rate was just below 5%, a predictable 100 basis point increase predicated on the Fed rate hikes. Note that falling long-term market yields in the last six weeks have brought the mortgage rate back down to 4.5%. 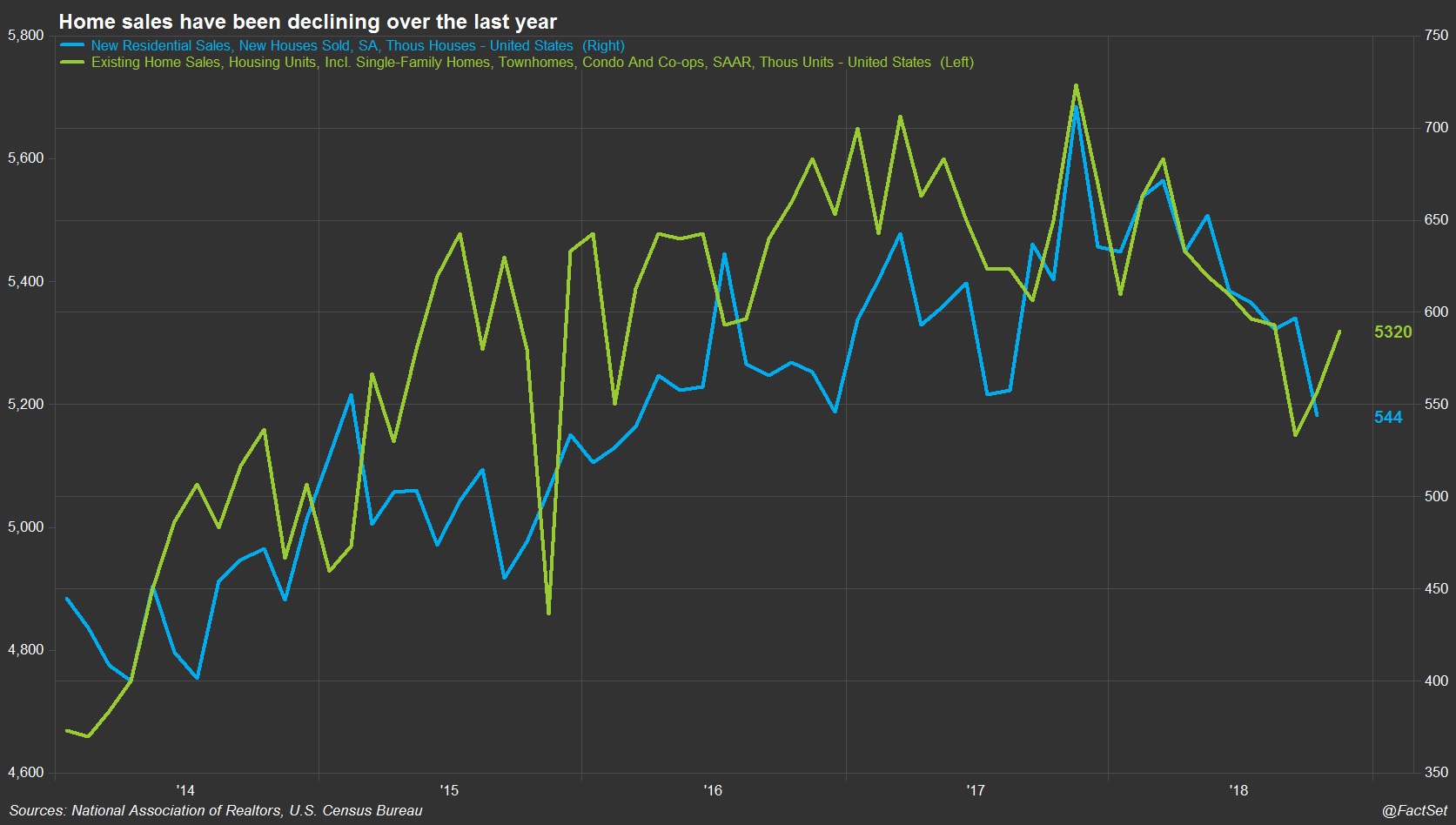 Sales of both new and existing homes fell throughout 2018 and this has had a negative impact on construction of single-family homes. Note that due to the U.S. government shutdown, the release of November data for new home sales, originally scheduled for December 27, has been postponed.

Last week’s release of the December ISM U.S. Manufacturing PMI data was a disappointment. The reading of 54.1 was well below broker estimates of 57.8. While anything over 50 indicates an expanding manufacturing sector, this is the lowest reading in two years. According to comments from survey respondents, negative impacts from tariffs are clouding the outlook.

Another closely watched indicator is the Census Bureau’s monthly data on orders of nondefense capital goods excluding aircraft. These so-called core capital goods orders are often used as a proxy for business spending plans. The value of orders appears to have peaked in July 2018, followed by declines over the last few months, but we will need a few more data points in order to discern a pattern. The December data release was scheduled for January 7, thus has been postponed due to the ongoing U.S. government shutdown.

Both of these indicators portend a continued slowing in business investment. One of the red flags from the last two GDP reports has been the slowing pace of growth in business spending on equipment. In the third quarter, annualized quarterly growth in equipment spending slowed to 3.4%, the slowest growth rate in nearly two years. The slowdown is being attributed to the diminishing benefits of the December 2017 tax cut as well as the negative impacts of import tariffs, which are leading to higher manufacturing costs.

It looks like trade will become an increasing drag on U.S. economic growth in the coming quarters. In the third quarter, net exports of goods and services subtracted two percentage points from GDP. The problem comes from both parts of the equation: the strong U.S. dollar means higher imports and lower exports. The strong U.S. economy is also supporting import growth in general, while the ongoing trade war with China is hurting exports to that country. After Canada and Mexico, China is the third biggest destination for U.S. exports, and the data looks increasingly grim. Monthly merchandise trade figures from the U.S. Census Bureau show that exports to China have fallen for the last three months for which we have data (August, September, October) on a year-over-year basis. October goods exports to China were down 29.6% from a year earlier. 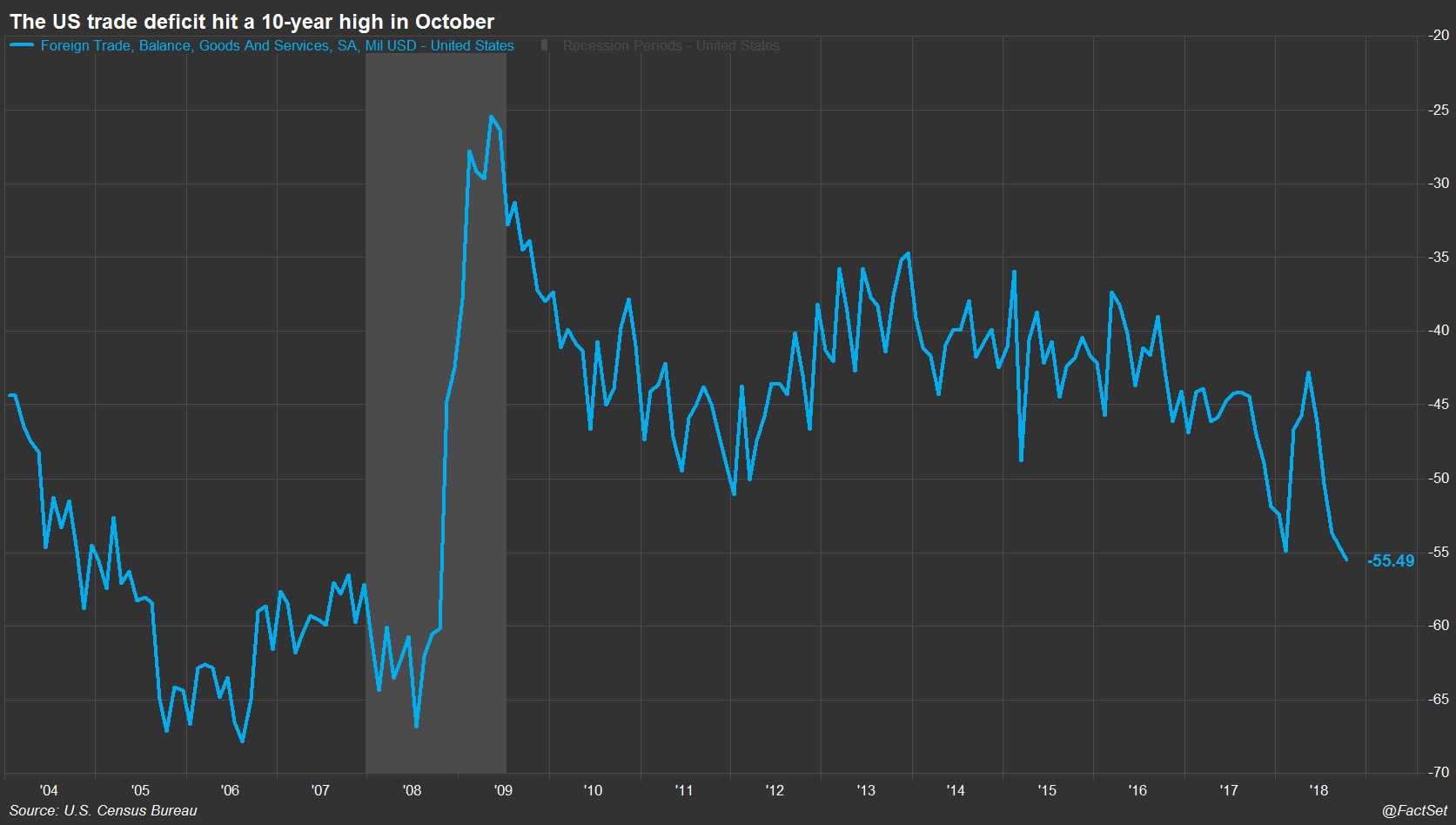