In June, we put together a series of visualizations intended to illustrate the most important and dramatic trends in the economic world as of the first half of the year. As we approach the end of the summer season, how have those trends changed?

Here, we've updated the charts and commentary to reflect recent data developments. Content is updated as of August 23.

We just completed year 10 of this economic expansion and we're now in the longest business cycle expansion in the post-war period. This expansion has now lasted 121 months (and counting), surpassing the length of the 1991-2001 expansion (120 months). While most economists will tell you that expansions don’t die of old age, the odds of fatal missteps increase the older they get. Even though this expansion appears to still have some legs, there are growing signs that the party may be coming to an end. 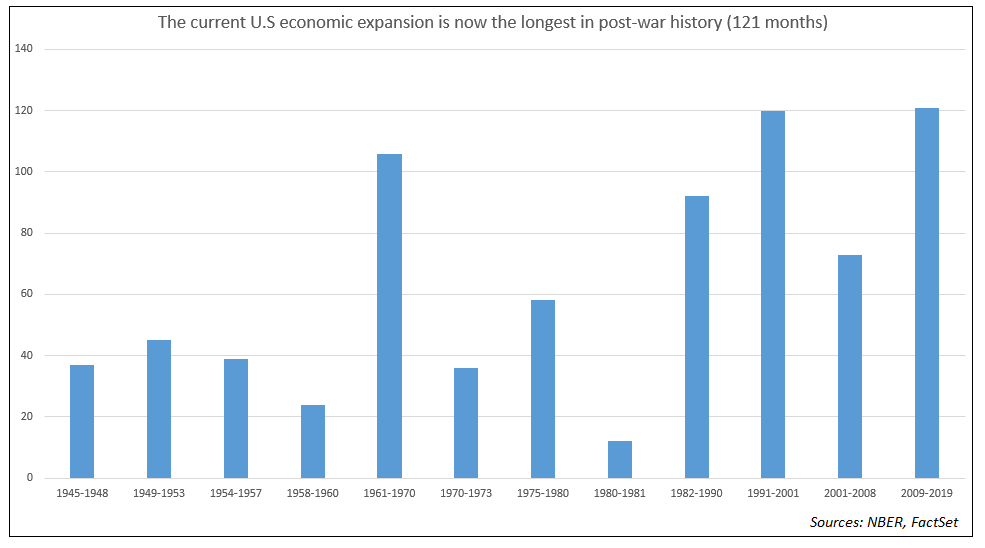 An inverted yield is generally considered a precursor of a recession. The U.S. yield curve has been flattening steadily over the last 10 months and is currently inverted. Since October 2018, the spread between the U.S. 10-year note and the U.S. 3-month bill has fallen from over 100 basis points to -39 (as of August 21). This measure of the slope of the yield curve also inverted at the end of March, but at that time markets were soothed by hopes for an impending trade agreement with China and the 10-year rose in response. In May, markets reacted negatively to a resumption in the tit-for-tat tariffs by both the U.S. and China. Earlier this month, the U.S. announced new tariffs on $300 billion in Chinese imports, to which China responded by allowing its currency to fall in value. All of this has stoked fears of an extended trade war which would increase the odds of a global economic recession, suppressing long-term yields. In addition, the Fed’s July 31 rate cut and shift to a more dovish stance have caused a downward shift of the entire curve.

In reaction to the increase in global trade tensions, we’re seeing a slowdown in global manufacturing activity, as evidenced by the dramatic decline in many countries’ manufacturing PMI readings over the last 18+ months. An index reading above 50 indicates an expansion in overall activity while a reading below 50 indicates contraction. Within the G7, only Canada, France, and the U.S. are currently showing expanding manufacturing sectors, with PMIs for the rest of the G7 having slipped below 50. Germany is showing the biggest deterioration in manufacturing activity, with the PMI having fallen from 63.3 in December 2017 to 43.6 in August 2019.

In previous expansions, cyclical lows in the unemployment rate were accompanied by a surge in wages. As shown in the chart below, this has historically meant wage growth above 4% year-over-year, as defined by average hourly earnings for private production and nonsupervisory employees. We see this in 1990, 1997-98, 2000, and 2006-2007; the 1997-98 jump in wages is the only point over the last 30 years where this jump in wages was not immediately followed by a recession. Compare this to the current expansion. Unemployment has fallen from a peak of 9.9% in December 2009 to a near 50-year low of 3.7% in July 2019. However, throughout this period wage growth has struggled to get above 3%, only surpassing 4.0% in one month (December 2018). 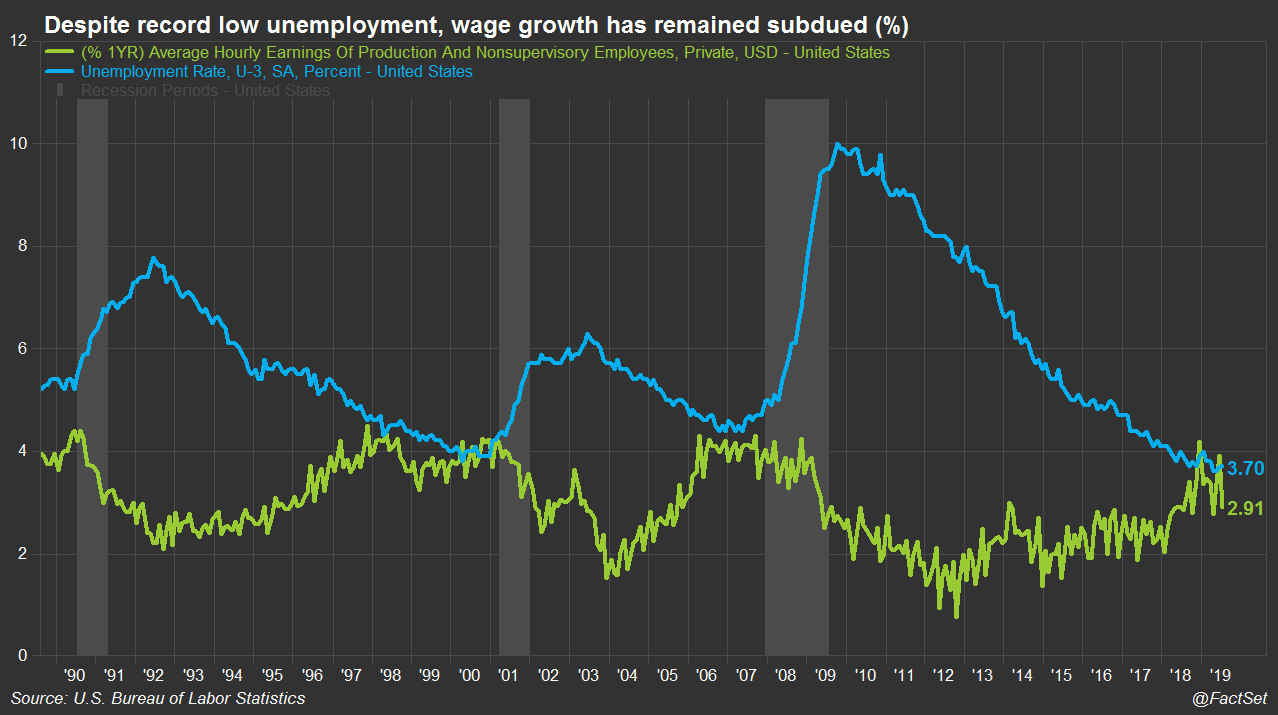 Viewed as a safe haven by investors in uncertain times, gold prices jumped above $1500 per ounce this week. This is the first time the metal has crossed this threshold since April 2013. The surge in demand for gold comes as global market uncertainty has risen in response to the imposition of new U.S. sanctions on Iran as well as a growing certainty of more Fed rate hikes this year. Expectations of lower long-term interest rates and the resulting weaker dollar are both contributing to gold’s strength.

Caterpillar has long been considered a bellwether of the global economy.