During each corporate earnings season, it is not unusual for companies to comment on subjects that had an impact on their earnings and revenues for a given quarter, or may have an impact on earnings and revenues for future quarters. Given the start of the Biden administration a few weeks ago, have companies in the S&P 500 been commenting on government policies that have changed or may change under the Biden administration during their earnings conference calls for the fourth quarter? How do these numbers compare to the start of the Trump administration four years ago?

To answer this question, FactSet searched for the terms “Biden” and “administration” in the transcripts of the Q4 2020 earnings calls conducted by S&P 500 companies through February 10 to see how many companies discussed these terms. FactSet then looked to see if the company cited or discussed a policy topic in conjunction with the citation of “Biden” or “administration.” FactSet then compared these results to a similar analysis done four years ago for S&P 500 companies citing “Trump” or “administration” in Q4 2016 earnings call transcripts over the same time frame. 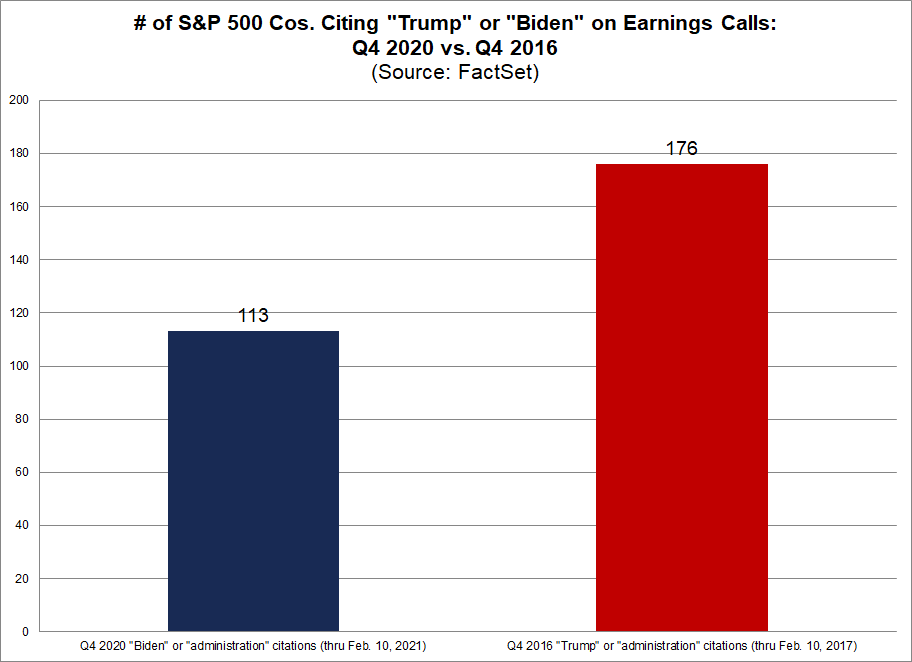 At the sector level, the Industrials (29) and Financials (20) sectors have the highest number of companies citing “Biden” or “administration” on earnings calls for Q4 2020 through February 10. These two sectors also had the highest number of S&P 500 companies citing “Trump” or “administration” through the same point in time four years ago. Again, the overall numbers for both sectors are lower today compared to four years ago. 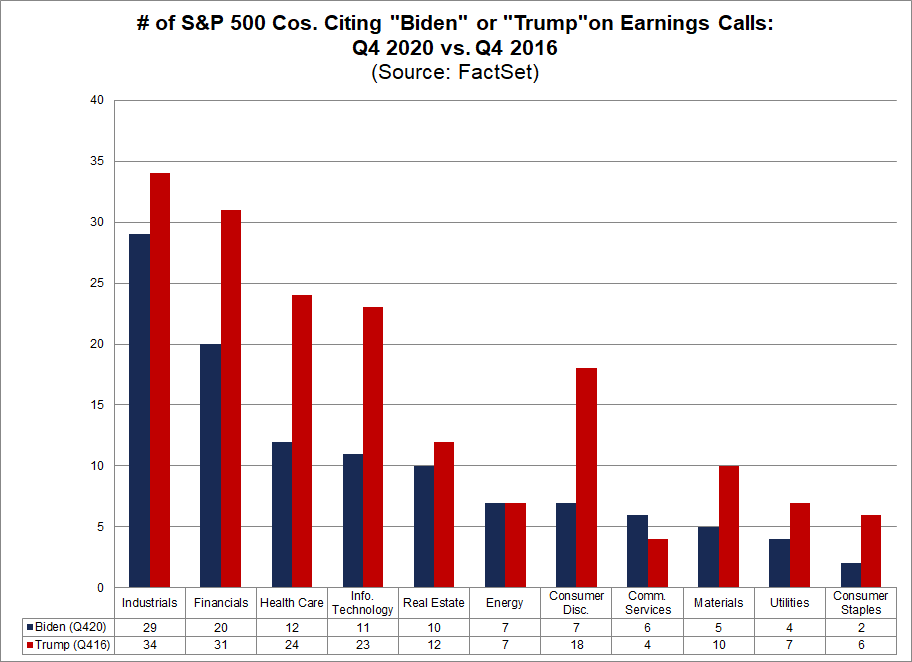 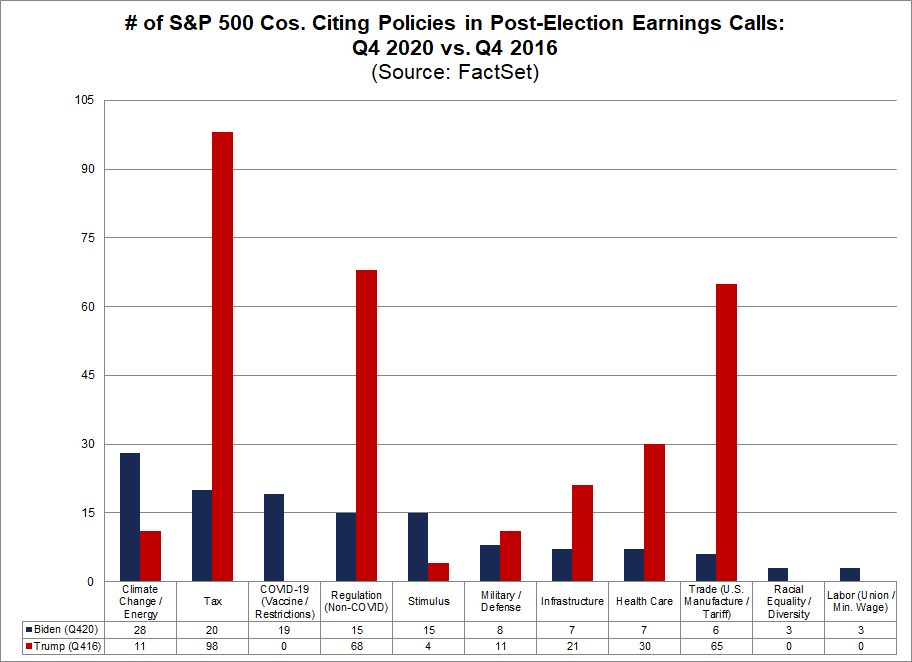 For climate change and energy policy, 28 S&P 500 companies have cited or discussed this policy in conjunction with the Biden administration on their Q4 2020 earnings calls. Of these 28 companies, 17 expressed support for (or a willingness to work with) the Biden administration on policies to reduce carbon and greenhouse gas emissions. These 17 companies either discussed initiatives to reduce their own carbon and greenhouse gas emissions or products or services they provide to help clients and customers reduce their carbon and greenhouse gas emissions. Five of these 28 companies specifically referenced the Paris Agreement during their earnings calls. However, four companies also expressed some concerns about the executive order establishing a moratorium on new oil and gas leases on federal lands (and offshore). Four years ago, 11 S&P 500 companies cited or discussed climate change and energy policy in conjunction with the Trump administration through this same point in time. Five of these 11 companies expressed support for the Trump administration’s policy on expanded pipeline construction, specifically the Keystone and Dakota Access pipelines.

A list of the companies that discussed climate change and energy policy, tax policy, and COVID-19 policy in conjunction with the Biden administration (and their comments) can be found in the full FactSet Earnings Insight report, which can be downloaded at the link below.

Highest Number of S&P 500 Cos. Citing “Supply Chain” on Q3 Earnings Calls in Over 10 Years

During their 3Q earnings calls, 342 S&P 500 companies cited the term “supply chain,” well above the five-year average of 178.

Of the S&P 500 companies that conducted earnings conference calls from September 15 through November 12, 285 cited the term...