As we come to the end of the first half of 2018, now is a good time to reflect on the state of the U.S. economy. Below we present five charts that summarize the year so far.

We’re at the end of the ninth year of this economic expansion, now officially the second longest business cycle expansion in the post-war period. At 108 months, we just surpassed the 1961-1970 expansion (106 months); the next milestone is 120 months, the length of the 1991-2001 expansion. It’s looking increasingly likely that this expansion will continue for more than a year and will become the longest since World War II. 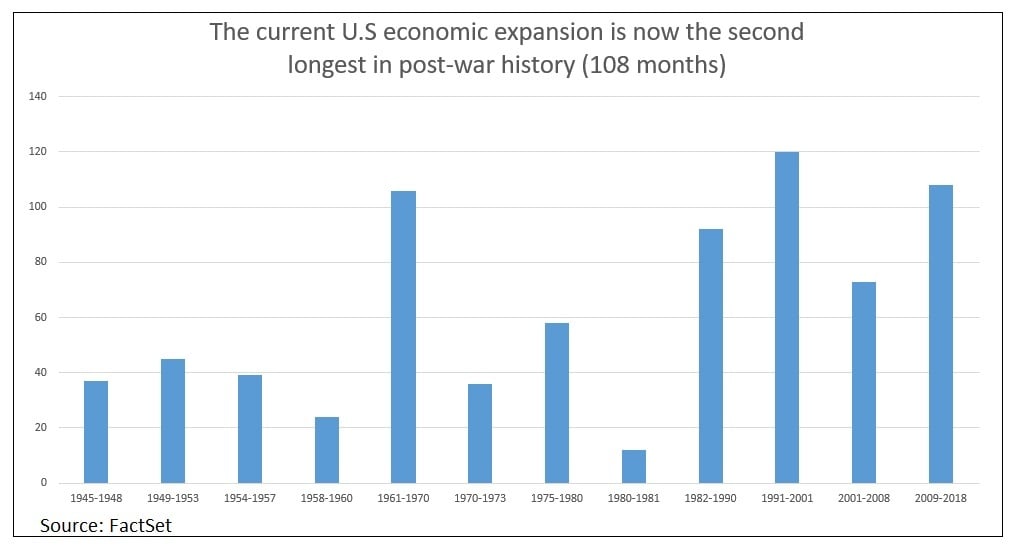 While growth in this expansion has consistently underperformed expectations, we are now seeing a late-cycle boost of energy. Quarterly GDP growth accelerated in the last three quarters of 2017, resulting in a 2.3% annual growth rate for the year. Growth dipped in the first quarter of 2018, but analysts surveyed by FactSet are predicting growth in the second quarter of 2018 of 3.6%, followed by 2.6% growth in the third and fourth quarters. The midyear pickup in growth is largely due to the federal tax cut passed in December 2017. However, higher inflation, rising interest rates, and trade tariffs will weigh on growth later this year and into 2019. For all of 2018, the median estimate is for growth of 2.8%, followed by 2019 growth of 2.4%.

The aforementioned tax cut will reverse progress made during this expansion to reduce the federal budget deficit. In 2009, as the government was called upon to stimulate the economy during the Great Recession, the deficit surged to 9.8% of GDP; by 2015, the ratio had shrunk to just 2.4%, its lowest level since 2007. According to FactSet Economic Estimates, the deficit will continue to swell over the next two years, growing to 4.8% of GDP by 2019, its highest level since 2012. Higher deficit numbers lead to higher debt borrowing, and this comes at a time when the Fed is aggressively raising interest rates. In addition, higher government borrowing itself puts upward pressure on interest rates, as the government is competing with the private sector for limited capital resources. The result is lower private investment spending, a phenomenon that economists refer to as “crowding out,” which leads to slower economic growth.

Employment took a huge hit with the last recession, but we’ve seen a remarkable improvement in the labor market during this expansion. During the Great Recession, weekly initial claims for unemployment insurance peaked at 665,000; so far in 2018, the weekly number has averaged 225,000. At the same time, the unemployment rate, a lagging indicator, surged to 10% in late 2009, the highest jobless rate in more than 25 years. As of June 2018, the unemployment rate sits at 4.0%, the lowest level in 18 years. Although some employment and survey statistics, as well as anecdotal evidence, suggest extremely tight labor markets, we have not seen wage inflation commensurate with the strong jobs data.

Households Are Once Again Taking on More Debt

Between 2000 and 2008 we saw a sharp increase in debt-fueled consumption. This was inextricably tied to the housing bubble, as consumers rapidly increased their mortgage debt as home values surged. According to data from the Federal Reserve, household mortgage debt went from $4.5 trillion in the first quarter of 2000 to $10.7 trillion in the first quarter of 2008, an increase of 138%. The crash of the housing market precipitated the 2008-2009 recession, and the resulting collapse in housing values wiped out trillions of dollars from consumers’ net worth.

Fast forward to the first quarter of 2018. Mortgage debt declined in the wake of the last recession, but has been increasing over the last few years and is approaching its housing bubble peak; household mortgage debt totaled $10.1 trillion in the first quarter of 2018, just 5.7% below the 2008 peak. At the same time, consumer credit has been growing steadily throughout the expansion, averaging annual growth of 5.2% since 2010. As a result, total consumer debt reached an all-time high of nearly $14 trillion in early 2018. The good news here is that incomes have been rising at the same time, so the share of household debt to disposable personal income has stabilized at around 95%, down from the 124% we saw at the time of the housing market crash; however, this is still well-above the 58% average we saw between 1946 and 1999. 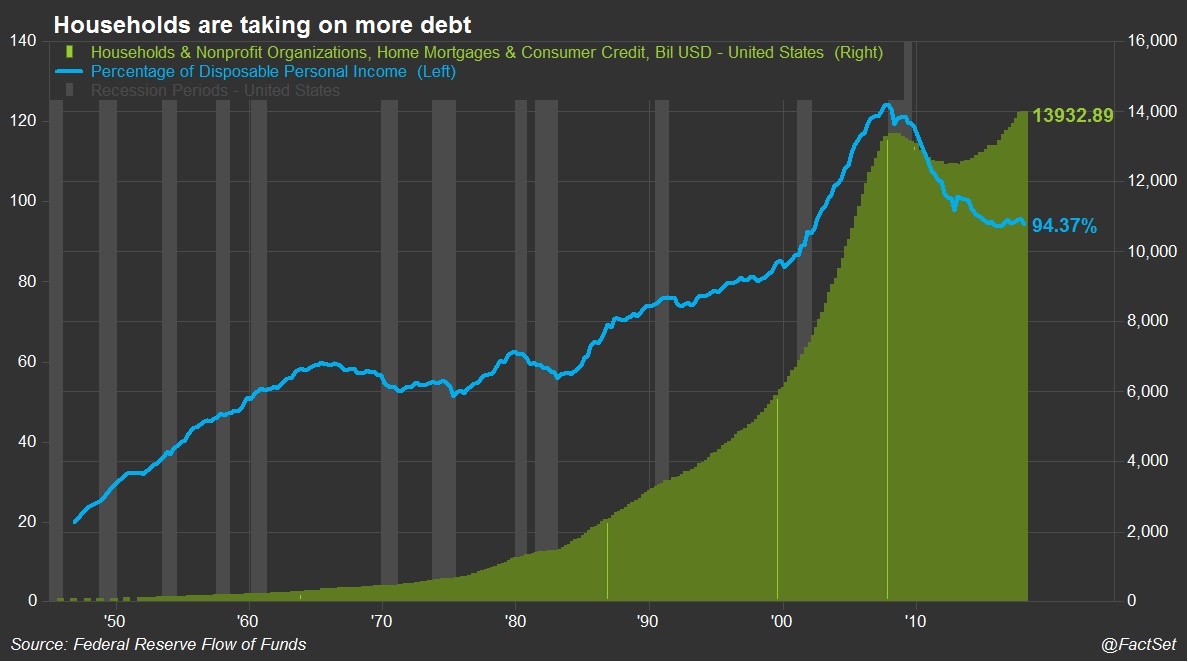