The year 2021 not only heralded the Year of the Ox on February 12, 2021, in China, it was also the starting year of a new 14th five-year plan (2021 to 2025). This latest five-year plan was drafted at the Fifth Plenary Session of the 19th Central Committee of the Communist Party of China, which concluded in October of last year. The plan is being officially adopted at the “two session” meetings of the National People’s Congress, the country’s legislature, and the top political advisory body, the Chinese People’s Political Consultative Conference, happening the first week of March.

The key theme of the plan is to focus not just on a GDP growth number but to achieve a “moderately developed” Chinese economy by 2035. A new phrase introduced at that meeting is “dual circulation,” defined as putting a primary focus on creating an “internal circulation” of domestic production to consumption, while also maintaining and growing an “external circulation” of importing and exporting goods and services with the rest of the world.

To monitor China’s progress on what is now commonly referred to as the “14-5 plan,” we have created a chartbook divided into four sections:

Examples of charts from each of these four sections are detailed below.

For this section, we will continue to track GDP growth based on the previous five years of quarterly data and forward-looking consensus estimates that FactSet has computed based on analyst projections. The Chinese economy is expected to see strong year-over-year real GDP growth in the first half of 2021 before returning to trend growth. 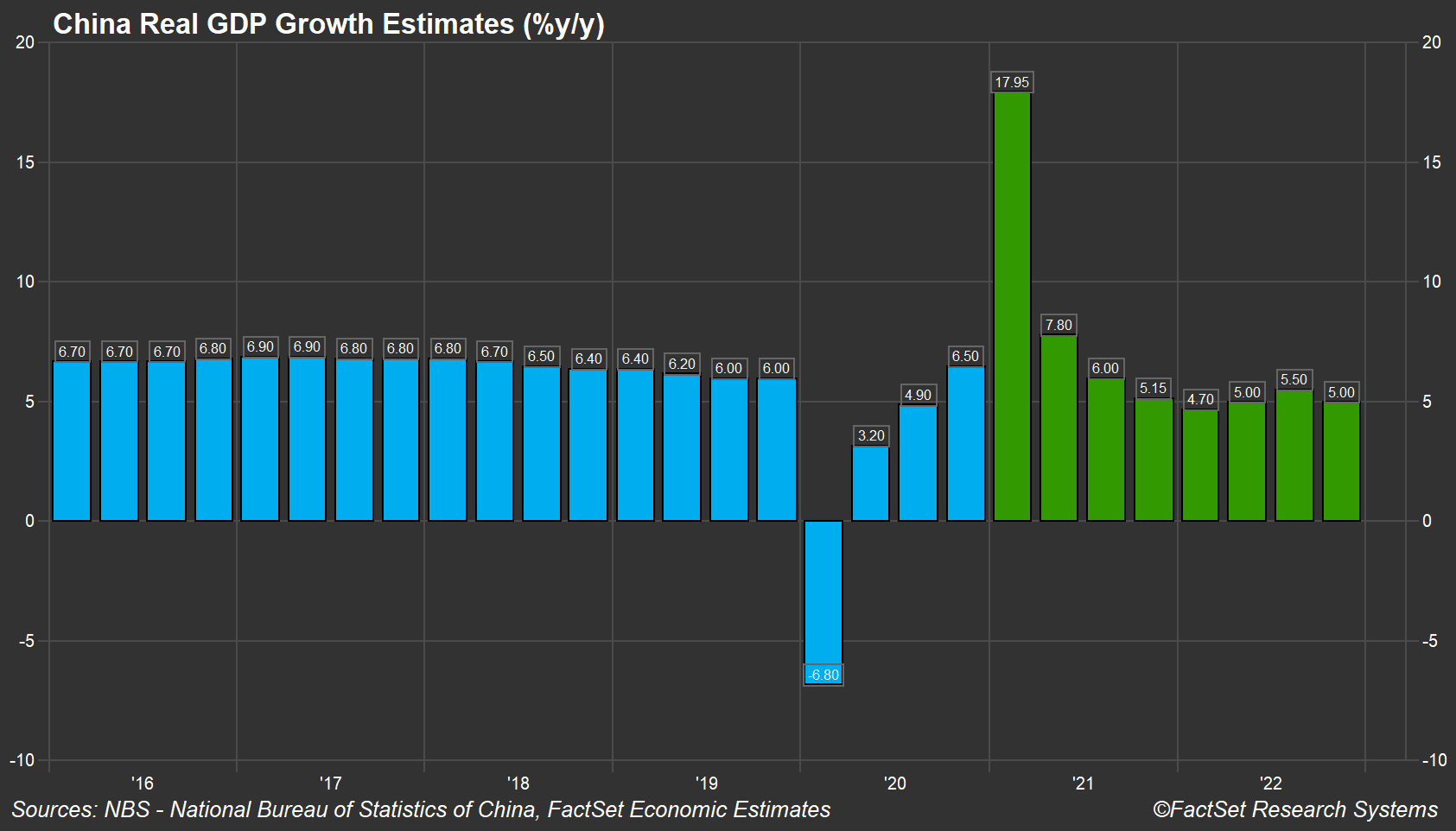 We will also follow monthly PMI sentiment numbers in this section to get a timelier and more detailed read across the different sectors, e.g., manufacturing vs. services.

This section will track the metrics measuring the “internal circulation.” For consumption, we will use the eight spending categories defined by China’s National Bureau of Statistics, not just the amount of absolute money spent, but also the relative share percentage of each category related to the total spent.

As pointed out in a previous Insight post, although overall consumer spending grew by 49% between 2014 to 2019 (8.3% per year), the Health Care and Discretionary categories (official category: Culture, Education, and Recreation Services) increased by 1.7x and 1.3x that five-year rate, respectively. However, in 2020, we saw a reversal in the pattern, with a pick-up spending in Food & Tobacco and Residence. It will be interesting to see if that was just a COVID-induced blip or a more systematic shift. 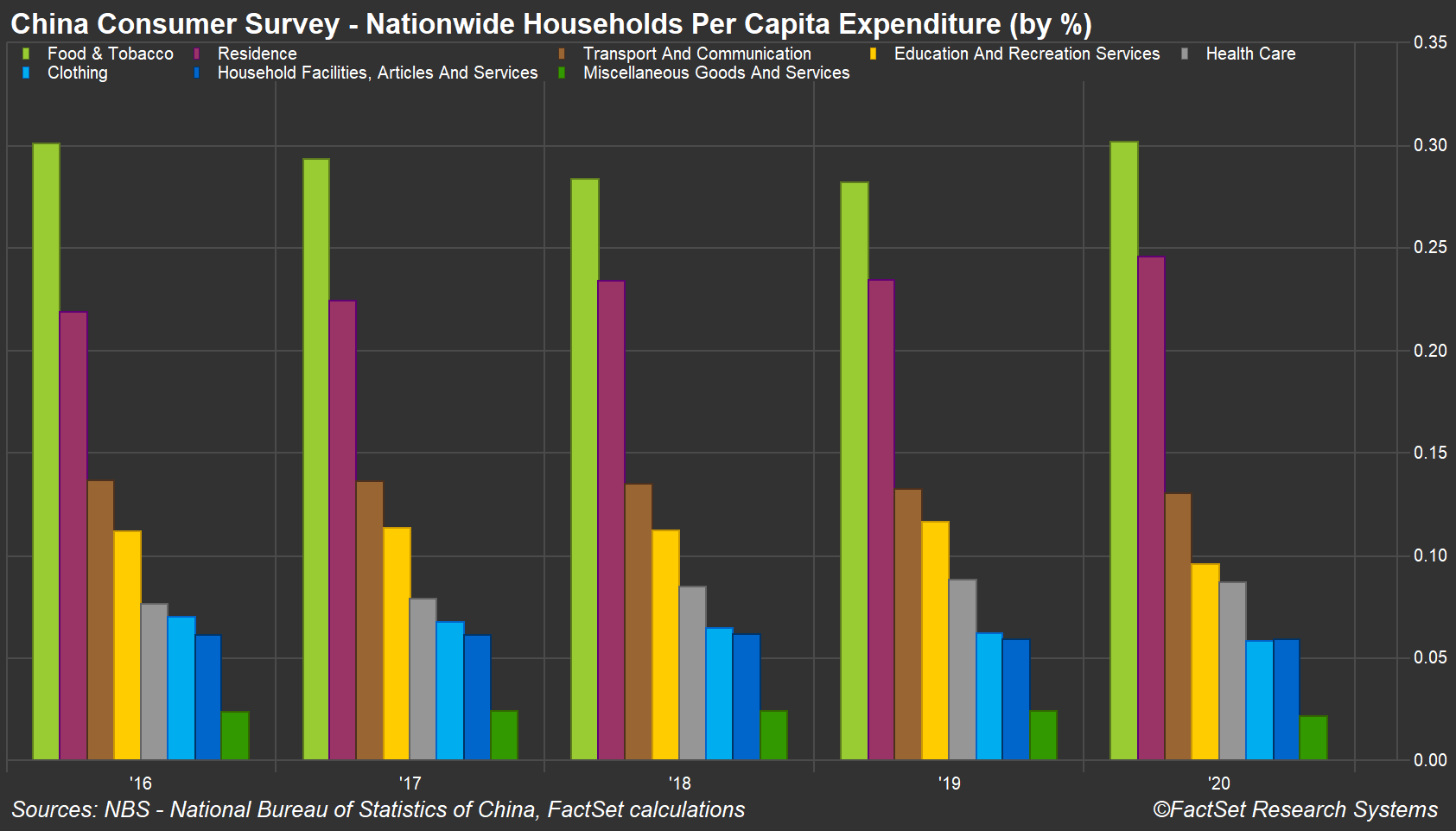 We will use this section to monitor the “external circulation” measures like trade balance and foreign investment and their impact on money supply. For trade balance, China set a 10-year monthly record at the end of 2020 with a $78.17 billion surplus, mainly due to back-to-back monthly export growth rates in November and December averaging nearly 20% compared to the previous year. At the same time, the growth rate for imports has followed a zig-zag pattern since its trough in May 2020 with year-over-year growth averaging less than 6% in the last three months of 2020. 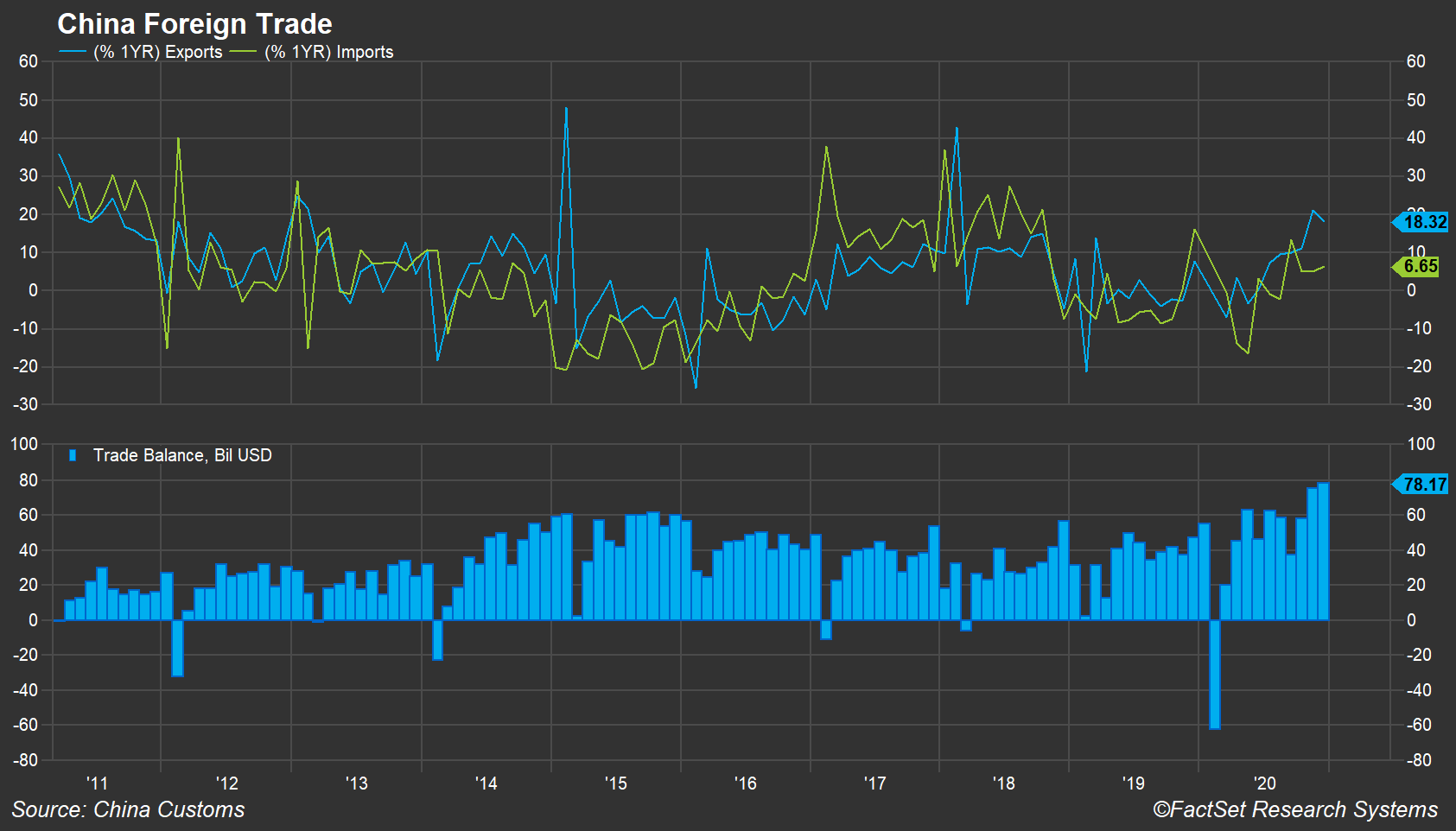 While many of China’s economic indicators have achieved or surpassed pre-COVID levels, there are a few areas that are still lagging. One area that is closely aligned to another major 14-5 plan goal is the reduction of disparities between urban and rural living standards. Creating job opportunities and reducing the unemployment rate in urban areas are two key areas of focus; currently, neither measure has recovered to its 2019 levels. 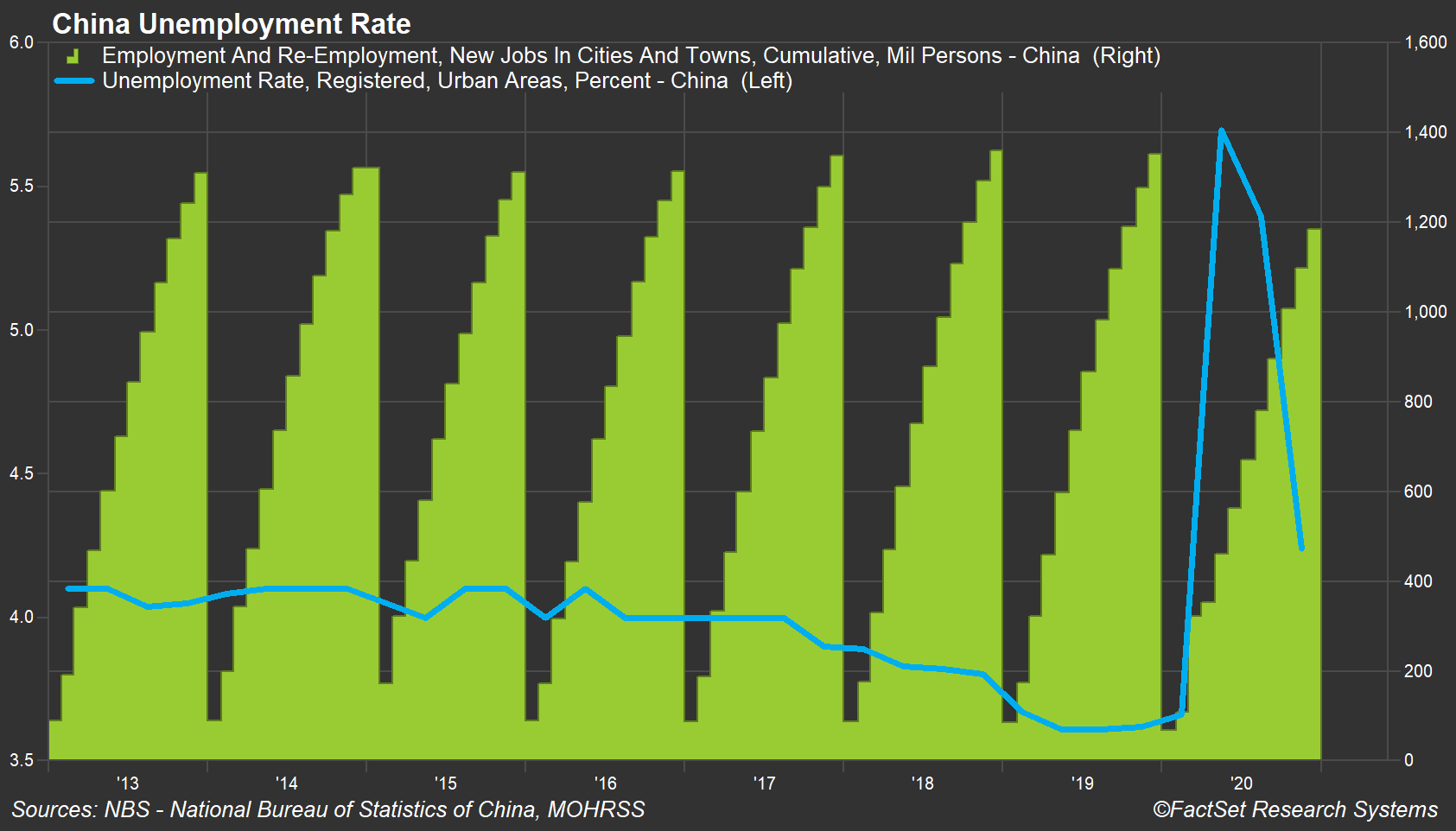 Another challenge that the plan hopes to address is how to nurture the creation and growth of small- and medium-sized enterprises (SMEs), which have contributed to 60% of the GDP and 82% of employment opportunities in China[1]. According to a recent report from Fitch Ratings, 2020 was a tough year for China's SMEs, as they experienced a plunge in business activity due to the COVID-19 pandemic. While the government has responded with a series of supportive policies targeting SMEs, rising interest rates and commodity prices remain a concern. The increase in treasury yields, in the case of the 10-year bond, by 48 basis points (from 2.82% on February 26, 2020, to 3.30% one year later) is certainly worth monitoring. 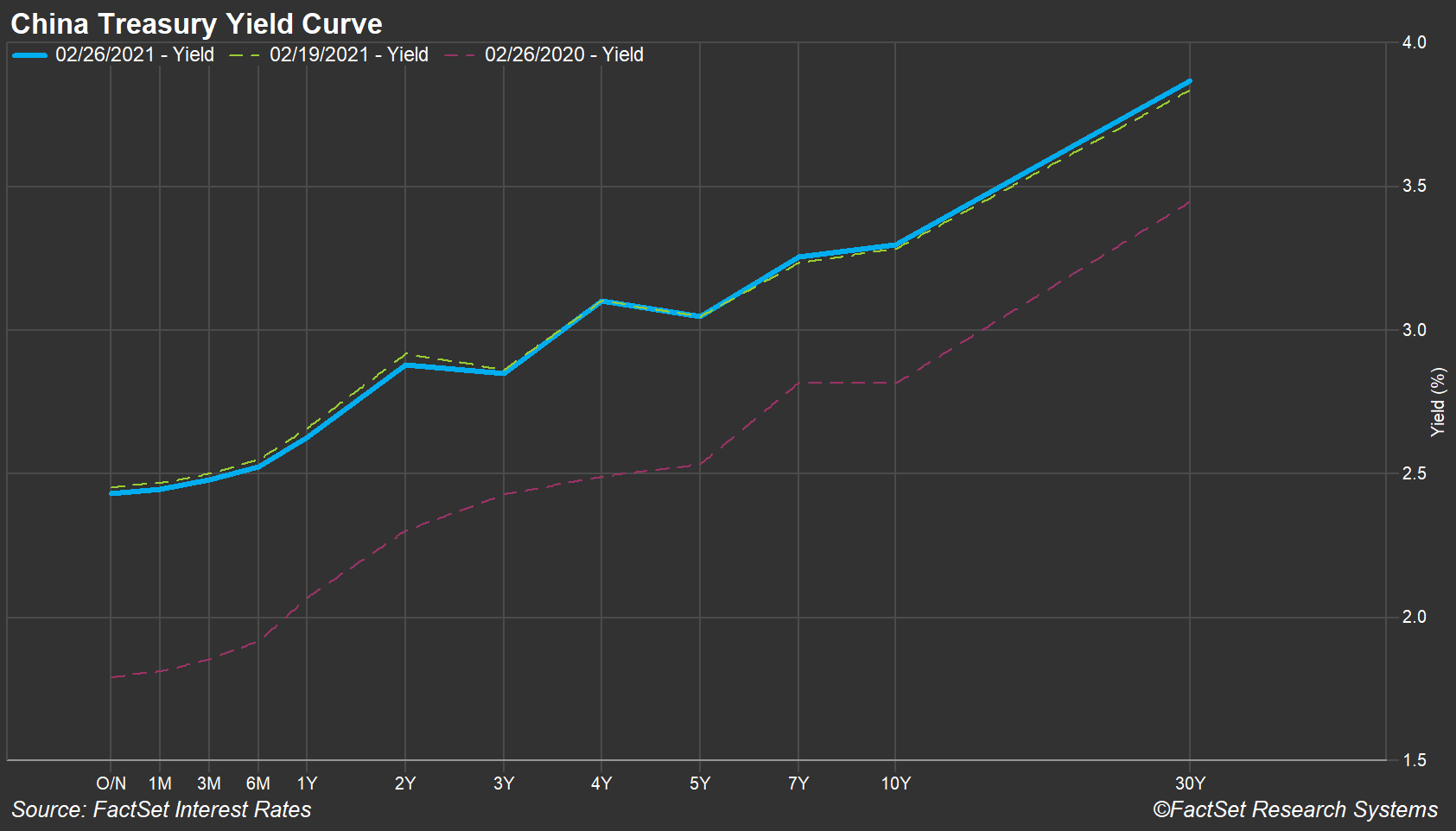 In addition to employment and credit watch, we are also tracking CPI and PPI in this category to be on the lookout for inflation risk.

These are just some examples of charts that FactSet has created and organized to give our users a more complete picture in assessing China’s economy, from both fulfilling its growth goals and addressing potential risks perspectives. FactSet clients can access our full suite of charts tracking the latest five-year plan via the FactSet workstation.