Today’s analysts, be they quantitative or fundamental, are presented with endless amounts of alternative data that can deliver insights never before possible. Whether it be satellite imagery, consumer credit card transactions, or crowdsourced information, these new data threads offer the context to understand a company’s future. While the variation and volume of data are growing at astonishing rates, one element has remained constant: the majority of time is spent cleaning, organizing, and preparing data for analysis.

For investors, a key challenge at this stage can be reconciling and standardizing symbology to allow for evaluation and integration alongside existing factors. As data types evolve, so must the idea of a symbology model. Today it must consider security to company relationships while creating a knowledge base that can unearth connections between companies, business segments, product levels, and beyond.

To underscore the importance of an interconnected knowledge base, here we examine the increasingly competitive wearables market, using well-known fitness hardware maker Fitbit as the basis for our analysis.

In response, Fitbit has focused on reducing its operating expenses while investing heavily in research and development. The outcome is the recently launched Fitbit Ionic, the company’s first smartwatch, which marks a shift from its historical focus on fitness trackers. Early results are promising, as CEO James Park noted on Q3 earnings call:

Reviews to date from both the experts and the press and consumers have been largely positive. Using average Amazon customer reviews with the U.S. as a proxy, the launch of Ionic marks the best reception of any Fitbit product within the first month of sales, with a rating of 4.2 stars. Fitbit Ionic and Blaze are now considered the number one and number two selling smartwatches on Amazon in the U.S., demonstrating that consumers continue to embrace our offering.

Flashing back to Fitbit’s 2016 Q3 call, Park exhibited similar, albeit slightly muted, enthusiasm regarding the Charge 2 and Flex 2 heading into the holiday season:

We introduced two new products Charge 2 and Flex 2 to positive reception. Charge 2 represents the successor to our best-selling product Charge HR. The production ramp has been favorable and we began shipping product late in the quarter. Reviews have been positive, earning Editor's Choice awards from both CNET and PCMag with prominent technology journalist, David Pogue calling it "One of the most satisfying health gadgets you can strap on your wrist." And the inclusion on Best Buy's top tech gift list for this holiday season. Amazon reviews have also been strong with an average rating of 4.2 stars out of 5 stars. Flex 2 also began shipping in the quarter. While not widely available in Q3, early editorial reviews of Flex 2 have been favorable.

With the goal of determining if this new product release will give Fitbit the boost it needs this holiday season, let’s construct the necessary connections to facilitate our analysis. Our knowledge base will be comprised of Fitbit’s revenue lines, business segments, and products.

Identifying Fitbit’s competitors in the wearables space is not rocket science as most (Apple, Samsung, and Garmin) are household names. However, this exercise demonstrates the impact a robust symbology layer can have in moving from a manual to a programmatic process. In determining competitors, it is important to assess two key areas: business line and associated revenue.

While it’s possible to use industry classifications that rely on market-defined approaches to group companies by behavior and trading similarities, for this analysis, we used the Revere Business and Industry Classification System (RBICS) with Revenue to align companies with a similar product focus. RBICS’s top three levels use a market-defined approach to group companies with behavior and trading similarities, while its lower three levels use a bottom-up approach to classify companies based on their products and services.

Comparing Garmin and Fitbit, we can see that Fitbit is fully concentrated within the “Cellular Phone Accessories Manufacturing**” sub-industry while Garmin derives just 27.11% of its revenue from this area. This demonstrates how the inclusion of revenue alongside a standardized classification system can provide greater insight into a portfolio and highlight exposure to a given industry. 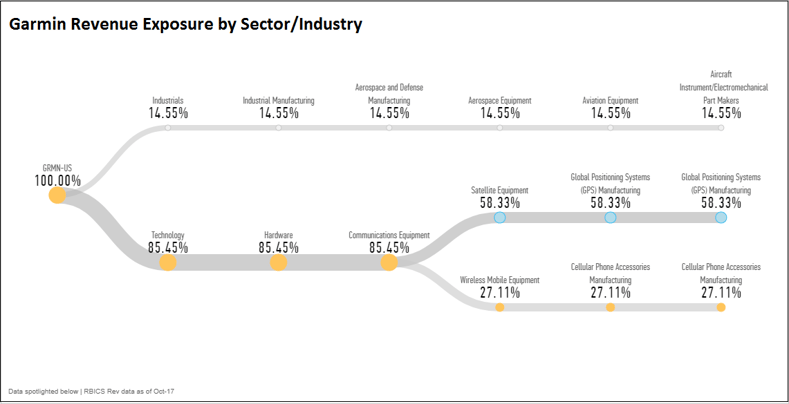 To determine the potential success of Fitbit’s products this holiday season, we will have to dive deeper into the product level. Revere Tradenames facilitates the extension from business line to the products/services of a company by mapping each to a classification, as we’ve done below.

With a knowledge base that encompasses companies, business lines and products, we now have a foundation to begin our analysis beyond traditional security-based data sets.

Fitbit’s CEO James Parks’ optimism for the Ionic was highlighted in the excerpts from the Q3 earnings call. Now, let’s repeat this analysis systematically for the entirety of the call using our newly constructed knowledge base. To assess the significance and sentiment of each product line, we leveraged FactSet’s XML Transcripts, Python, Revere Tradenames, and the Loughran and McDonald (2011) Financial Dictionary. Python packages Minidom and Natural Language Toolkit (NLTK) were used to parse Q3 earnings call. Then, leveraging Revere Tradenames, sentences containing a mention of a product were extracted (as well as generic terms such as “wearable” or “smartwatch”) and each sentence was then given a sentiment score based on the calculation (Pos-Neg)/TotalWords.

This reaffirms our assumption of the importance of the Ionic’s launch and Fitbit’s dependence on its success this holiday season. Obviously, the success of the product will not be judged in a vacuum, as the consumer will have many choices in the wearables space. To further contextualize our analysis, we can reference our knowledge base to understand the wearables landscape this holiday season and identify the competitors and products that will also populate wish lists.

Using RBICS sub-industry classification for Fitbit we can further expand our knowledge base through connections at the sub-industry level. Here, we’ll focus on Apple. The network diagram below highlights linkages between Apple and Fitbit, with the outermost ring representing the sub-industry classifications for each company, revealing Apple’s more diversified offerings. The middle rings contain tradenames associated with a given industry and company, which are represented by the innermost ring. 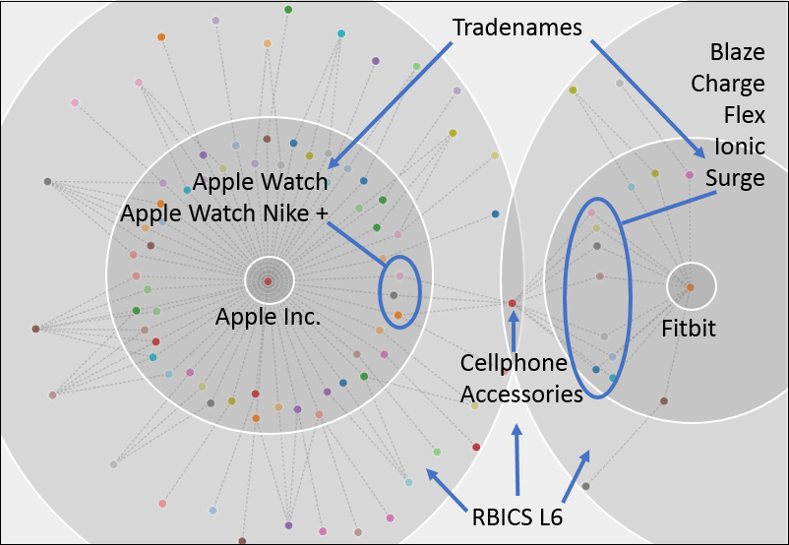 To gauge interest in these products we can use the Google Trends API. The application of Google Trends into financial analysis is not new; research papers have shown strong correlations between search trends and monthly sales within the auto industry as well as other macroeconomic applications. For those who are unfamiliar with Google Trends, it provides an indexed value 0 to 100 based for a given term. The index is based on the search volume for the term divided by the total number of searches for a given time period and/or geographic region. The maximum relative search volume for that term is normalized to 100 and the initial date being examined is normalized to zero.

Again leveraging Python, specifically the PyTrends package, we will be accessing the Google Trends API to return the popularity of various tradenames. First, let’s look at Fitbit’s tradenames between November 5, 2016 and November 25, 2017:

While the Ionic made a splash, there is a clear decline in the search popularity for Fitbit’s major products since last winter’s peak, which resulted in a disappointing Q4. Now let’s compare that with searches for the Apple Watch: 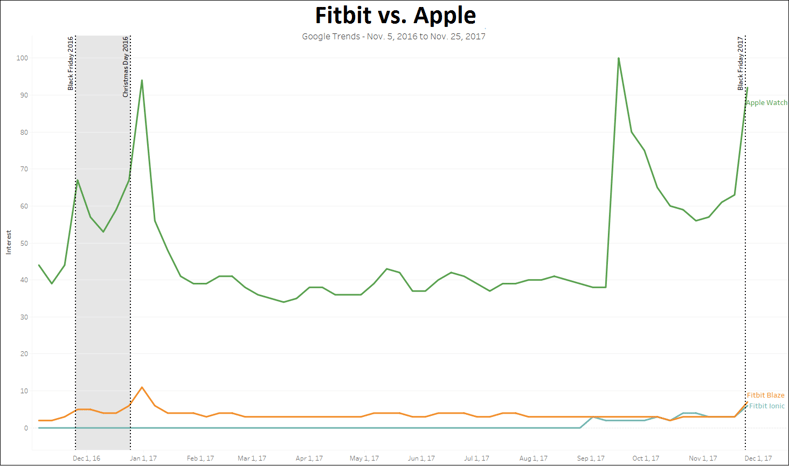 The popularity of Apple continues to outpace Fitbit thanks to the introduction of a new Apple Watch and reduced prices on previous versions in September 2017. While a deeper analysis would certainly yield a more scientific prediction, at face value these results do not bode well for Fitbit.

Data-driven decisions are not new to the financial industry; quants have used data science since before there was a name for it. What has changed is the abundance of data and ideas that can be explored, which in turn has intensified the importance of a multifaceted symbology layer that can establish connections across many dimensions. The ability to understand a business, product, and competition within a standardized framework enables seamless integration of unstructured and alternative data. Incorporating alternative data sets is a necessity, but in order to capitalize and do so at speed, you need an interconnected symbology layer as the foundation.

Smart Automation: How Technology is Redefining the Trading Business

Over the past few years, artificial intelligence (AI) and machine learning (ML) have become an integral part of global financial...