While China and the U.S. remain locked in a trade war, the impact on global trade flows is having a negative impact on economies across the Asia Pacific region. The charts below provide a glimpse into what is happening across a few key economies.

With exports to the United States down 9.4% year-to-date through August, the ongoing trade war is having a clear negative effect on China’s manufacturing sector. According to the most recent readings of the Purchasing Managers’ Index (PMI) published by the National Bureau of Statistics, China’s manufacturing sector has been in contraction for the last five months. While the index came in at 49.8 in September, in August industrial production rose by just 4.4% on a year-over-year basis. This was the slowest monthly growth rate in more than 17 years and came in well below expectations for a 5.2% expansion according to analysts surveyed by FactSet. 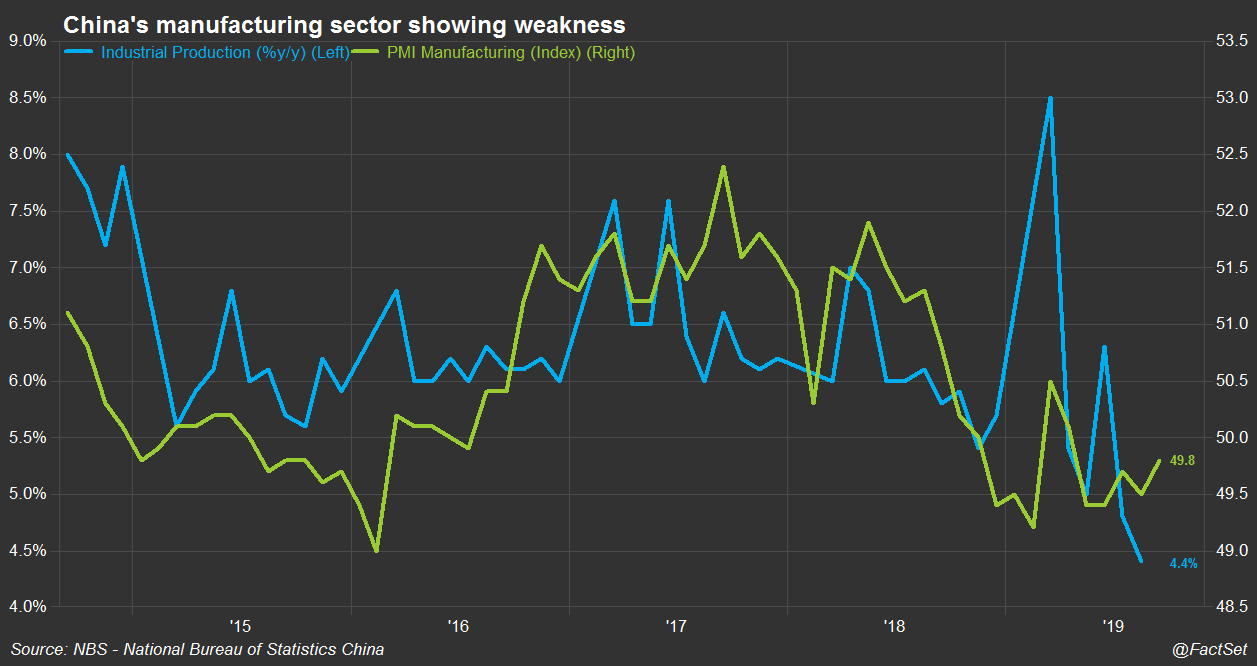 Singapore’s economy grew by just 0.1% on a year-over-year basis in the second quarter, the slowest quarterly growth rate in ten years. Trade was a significant drag on Singapore GDP in the first half of 2019. Exports to China fell by 8.8% in 2018 and remained essentially flat in the first half of 2019; a further deterioration in the outlook for Chinese growth would have negative implications for Singapore’s growth going forward. The Singaporean government cited increased risks in the global economy due to the escalating trade conflict between the U.S. and China as it downgraded its 2019 forecast. The largest sector of the economy, manufacturing, fell by 3.1% compared to a year earlier, largely due to sharp declines in output of electronics and precision engineering as global demand for electronics shrinks.

As the Australian economy enters its 29th year of expansion, the country’s central bank is doing everything it can to keep the expansion going. While the economy continues to expand, growth has come in below trend over the last four quarters. The Reserve Bank of Australia (RBA) cut interest rates twice over the summer in the face of growing global economic uncertainty and weak consumption spending at home. According to FactSet calculations, markets were pricing in a 77.5% probability of a third rate cut at the RBA’s October 1 meeting; the central bank followed through with a 25 basis point cut. 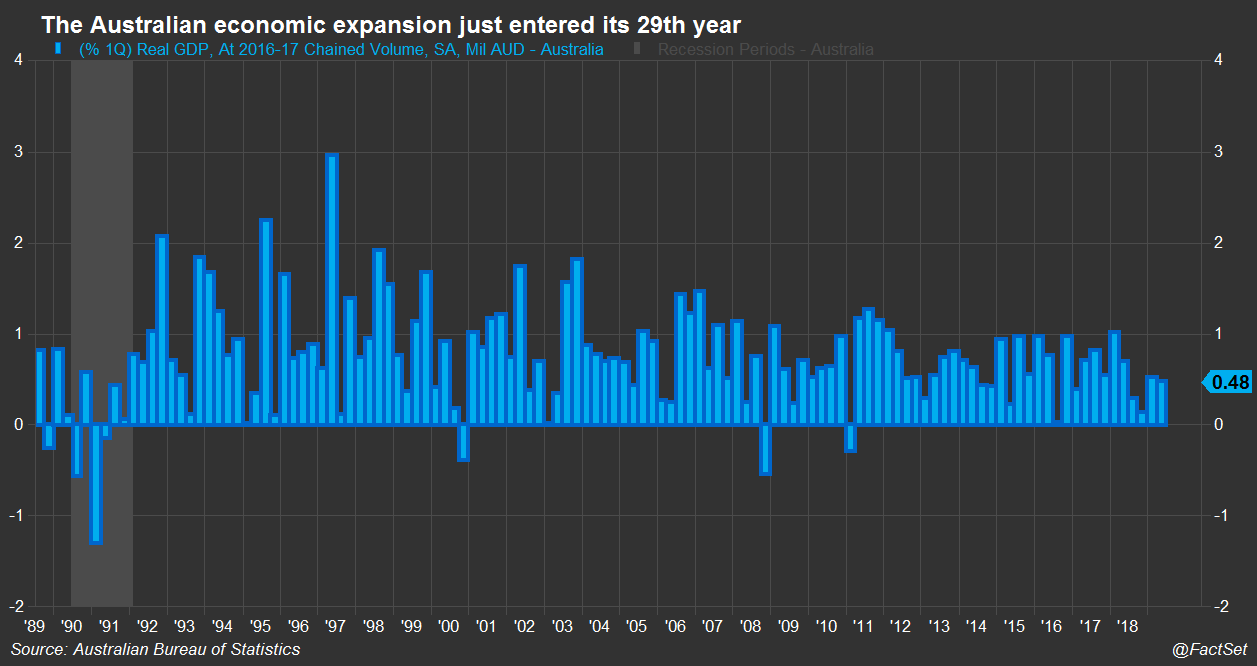 Continued domestic protests and escalating global trade tensions are weighing on Hong Kong’s economy. In the second quarter, the economy grew by just 0.5% compared to a year ago; this was the slowest growth rate in a decade. The disruptions are negatively impacting sentiment across the economy. Retail sales have been declining on a year-over-year basis for the last six months, plummeting by 13% in July. Private sector activity, which has been contracting since early 2018, fell sharply in August according to the IHS Markit Hong Kong PMI. The index dropped from 43.8 in July to 40.8, its lowest reading since February 2009. 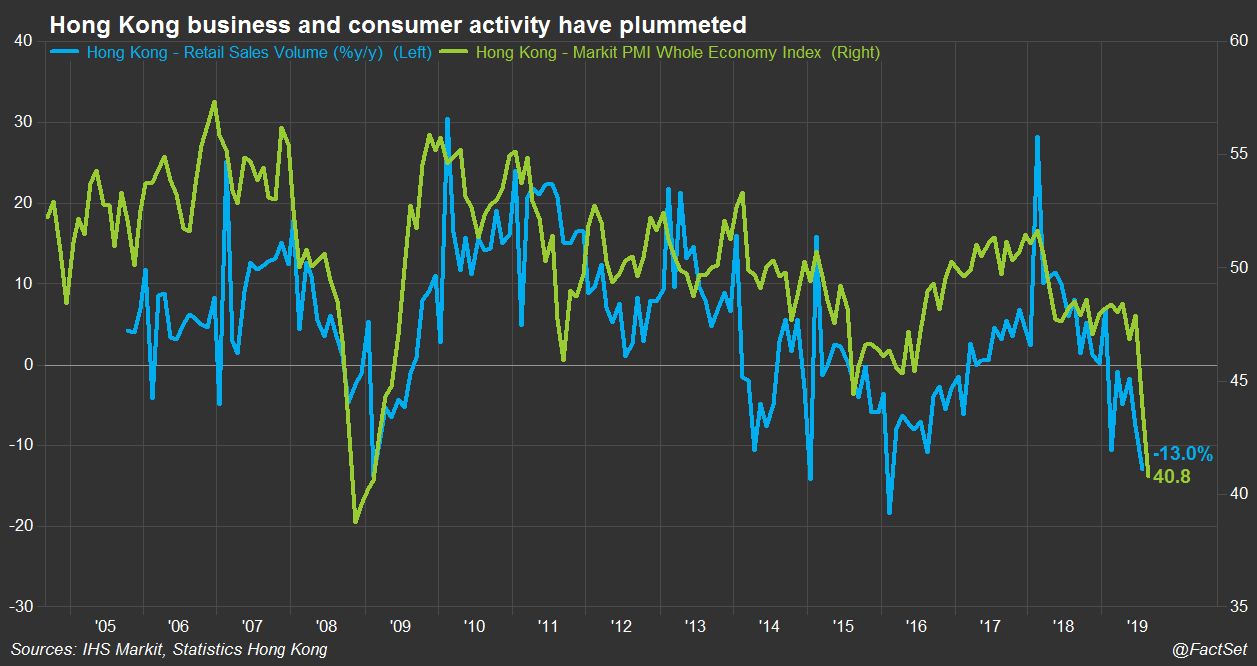 In the second quarter India’s real GDP grew by just 5.0% from a year earlier, the slowest growth in six years. Business sentiment has been on the decline for the last 18 months, while on the consumer front, passenger car sales plummeted 30% on a year-over-year basis in July. The government has been injecting stimulus into the economy on several fronts to boost growth, including interest rate cuts and reduced corporate taxes. However, in September the IMF released its Interim Economic Outlook, which included drastic cuts to India’s GDP forecast; the organization cut the 2019 (fiscal year) forecast from 7.2% in May to 5.9%, while the 2020 forecast was reduced from 7.4% to 6.3%. 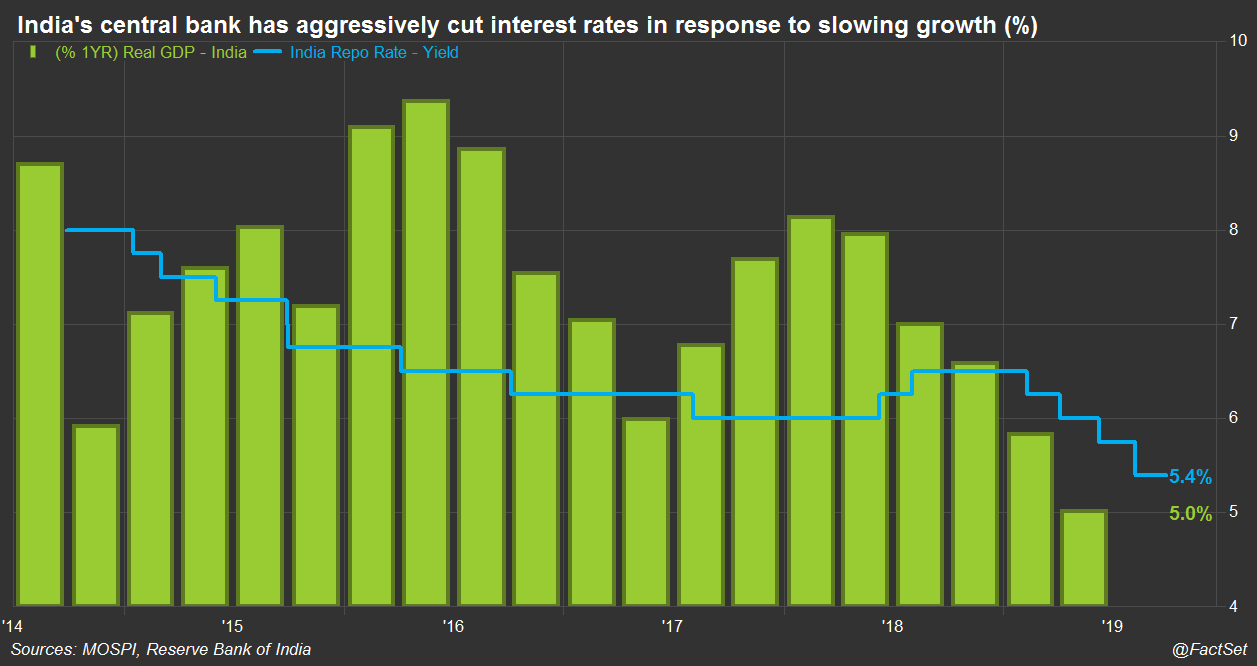