The combination of Brexit and a decline in global trade flows is having a negative impact on economies across Europe. The charts below provide a glimpse into what is happening across a few key economies.

The Eurozone’s export-intensive manufacturing sector is feeling the negative effects of increased global trade tensions and a slowdown in global demand, not to mention the uncertainty surrounding the UK’s exit from the European Union. Although purchasing manager index (PMI) readings for the Eurozone bounced back a bit in October, they remain near multi-year lows. The manufacturing PMI came in at 45.9 in October, just above September’s seven-year low of 45.7. While the services PMI shows an ongoing expansion with a reading of 52.2, with a year-to-date average of 52.7, 2019 is on track to have the lowest annual reading since 2014 (52.5). At the same time, the region’s economic sentiment indicator fell to 100.8 in October; its lowest reading in four and a half years. 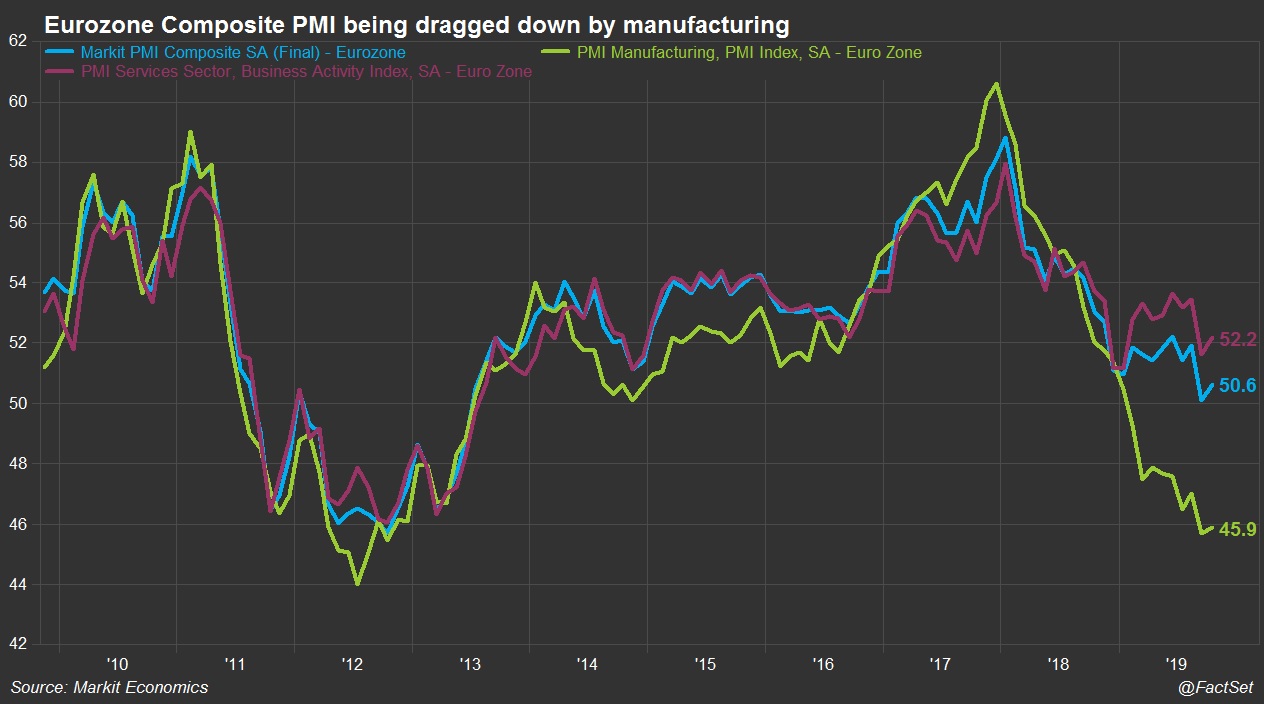 The German economy is being hit especially hard by the pullback in global demand. Exports were a drag on the economy in the second quarter as the overall economy contracted by 0.2%. The economy avoided slipping into a technical recession with a 0.1% expansion in the third quarter. The export-driven manufacturing sector has been contracting throughout 2019; the manufacturing PMI has fallen from a peak of 63.3 in December 2017 to a ten-year low of 41.7 in September 2019. Overall business climate has dropped precipitously as well, as measured by the German IFO Business Climate Index, which surveys manufacturers, builders, wholesalers, and retailers. While the index for current business conditions has dropped sharply since January 2018 (108.6 to 97.8), business expectations fell to a 10-year low in September. 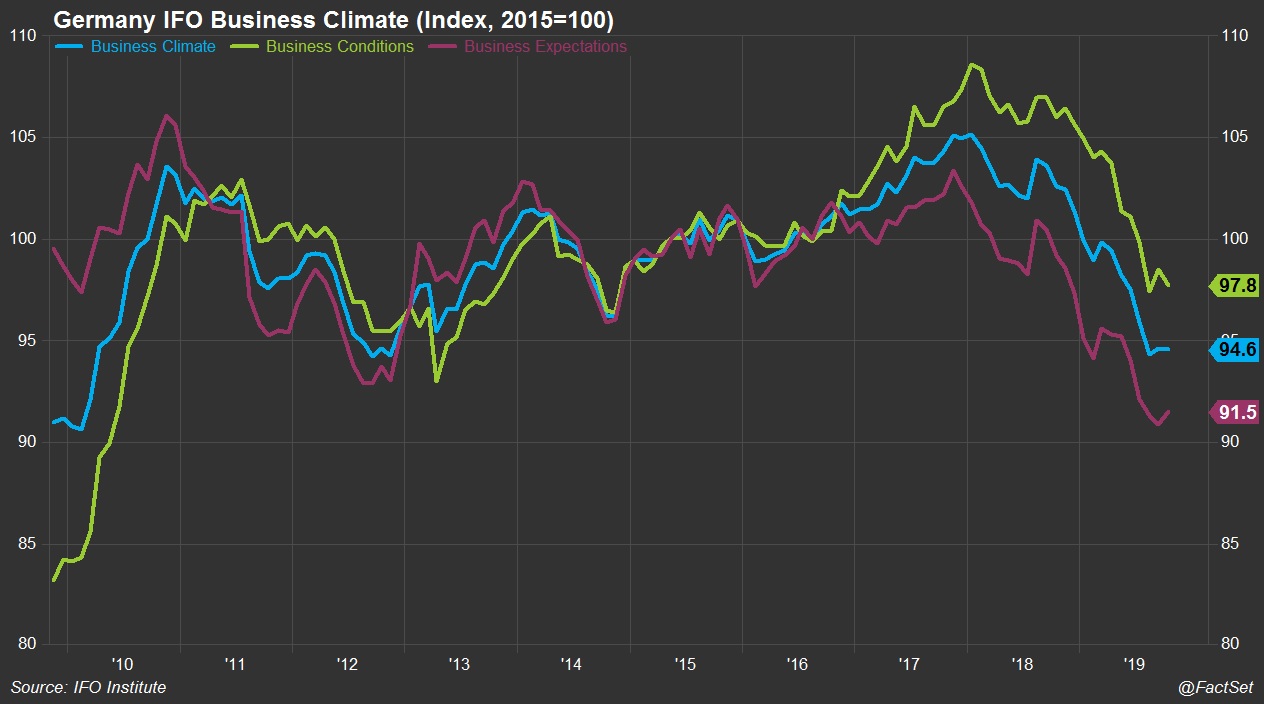 While France’s unemployment rate has fallen to a more than 10-year low of 8.6%, the country still boasts the fourth highest jobless rate in the Eurozone, behind Greece (17.3%), Spain (14.2%), and Italy (9.9%). Yet the improvement in the job market has helped to bolster the French consumer with confidence surging throughout 2019, reaching a near two-year high of 104.2 in September. This optimistic consumer has boosted household spending and helped support GDP growth. Analysts surveyed by FactSet expect economic growth to remain stable into 2020, projecting annual growth of 1.3% in 2019 and 2020. 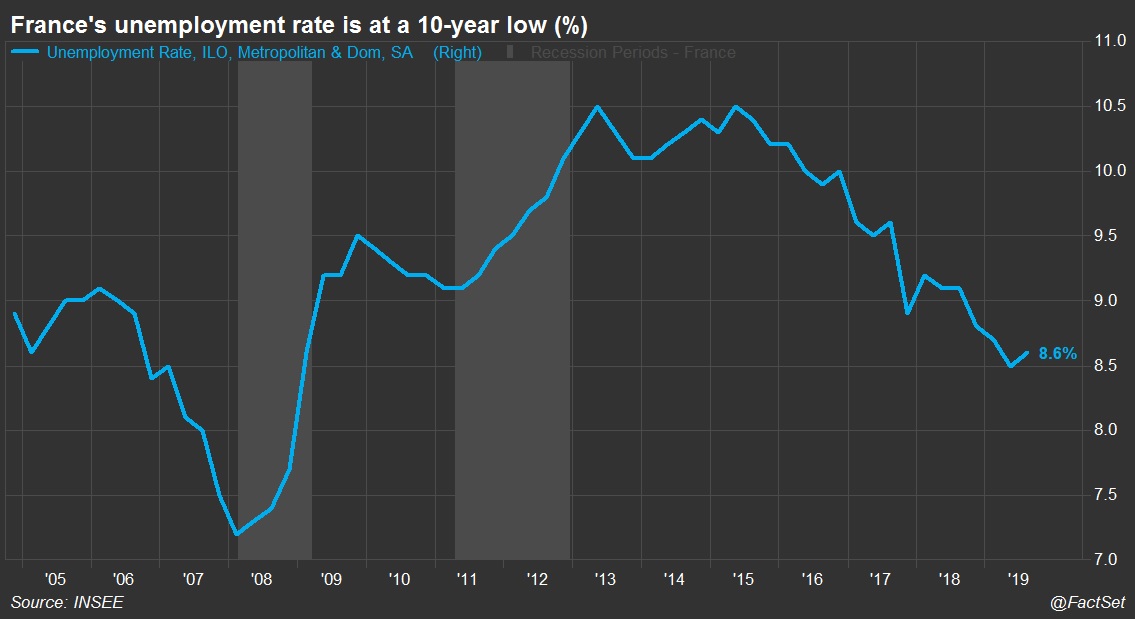 Italy’s economy has completely stalled in 2019, with FactSet Economic Estimates predicting a 2019 growth rate of just 0.1%. The country continues to face problems both on the fiscal and political fronts, negatively impacting business confidence and investment. The ISAE business confidence index fell to a five-year low in September while the manufacturing PMI has been stuck in contraction mode for the last year. The consumer has proven somewhat more resilient, with consumer confidence only faltering slightly in recent months. An improving labor market has certainly helped; in the second quarter, the unemployment rate fell below 10% for the first time in more than seven years. 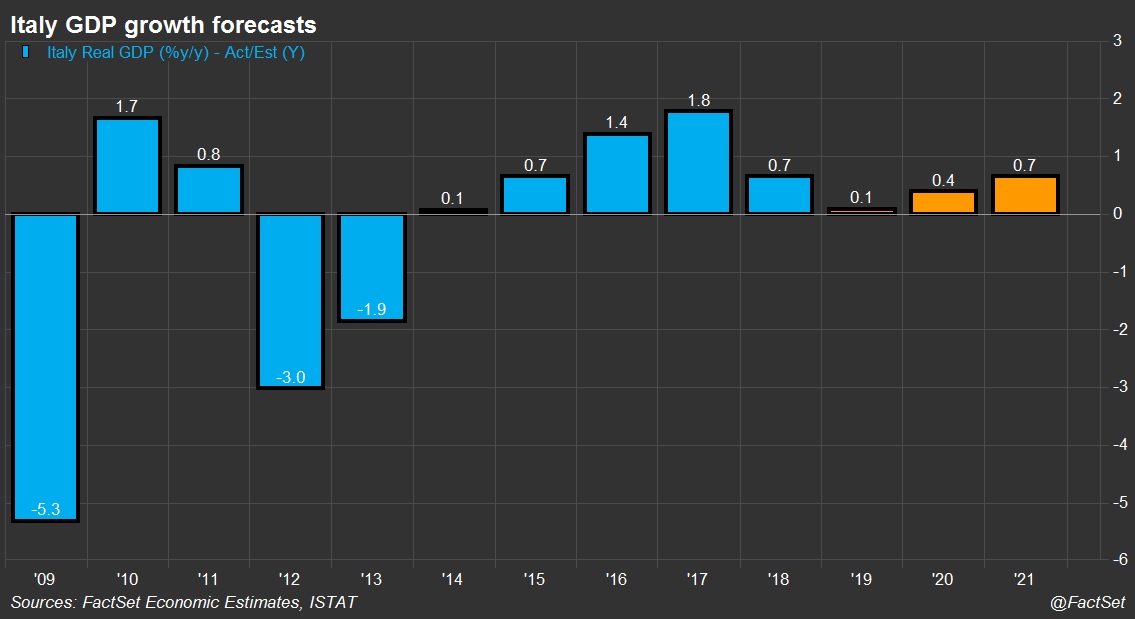 Three years of Brexit uncertainty continue to weigh on the UK economy. After contracting 0.2% in the second quarter, the economy managed to avoid recession and expanded by 0.3% in the third quarter. As we have seen globally, weakness is being led by the industrial sector. According to the most recent PMI readings, manufacturing has been in contraction for the last six months; September industrial production was down 1.4% from a year earlier. While the unemployment rate has plateaued near 45-year lows (3.8-3.9%), the labor market is starting to show signs of weakening. The alternative claimant count* produced by the Department for Work and Pensions (DWP) shows an uptick in claims for unemployment benefits in 2019. In addition, the latest data on average earnings show a slight deceleration in wage growth. 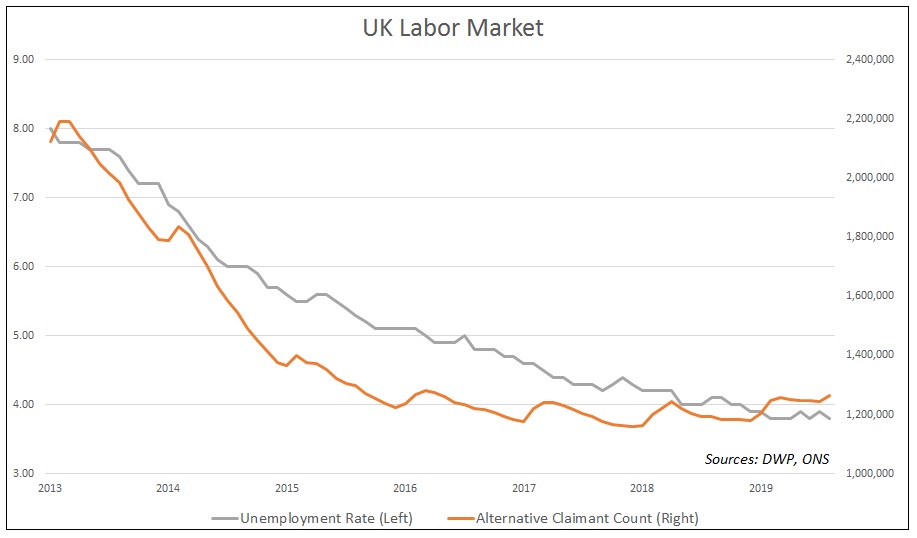 *Historically, the claimant count statistic produced by the Office for National Statistics (ONS) measured the number of people claiming unemployment related benefits. However, a 2013 change to how claimants can receive benefits led to a distortion in this measure, leading the claimant count to increase irrespective of the performance of the overall economy. The DWP developed the alternative claimant count to account for this data distortion and provide a consistent and more accurate measure of the UK labor market.