Even as COVID-19 vaccine rollouts proceed worldwide, many European countries have been forced to reinstate lockdown measures to combat surges in infections. Let’s examine some of the data that will guide us in monitoring the European economies in 2021.

The Eurozone economy contracted by 0.7% in the fourth quarter of 2020 compared with the previous quarter as countries reinstituted lockdowns to combat the second wave of COVID-19. The decline was fueled by large declines in France (-1.4%) and Italy (-1.9%), while Germany and Spain saw modest growth. For all of 2020, the region's economy contracted by 6.8%. Weakness is expected to persist through the first quarter of 2021, with analysts surveyed by FactSet expecting a 1.1% decline in real GDP for the Eurozone. However, economic growth is expected to surge over the next three quarters, with annual growth projected to be 4.3% in 2021 and 3.9% in 2022. 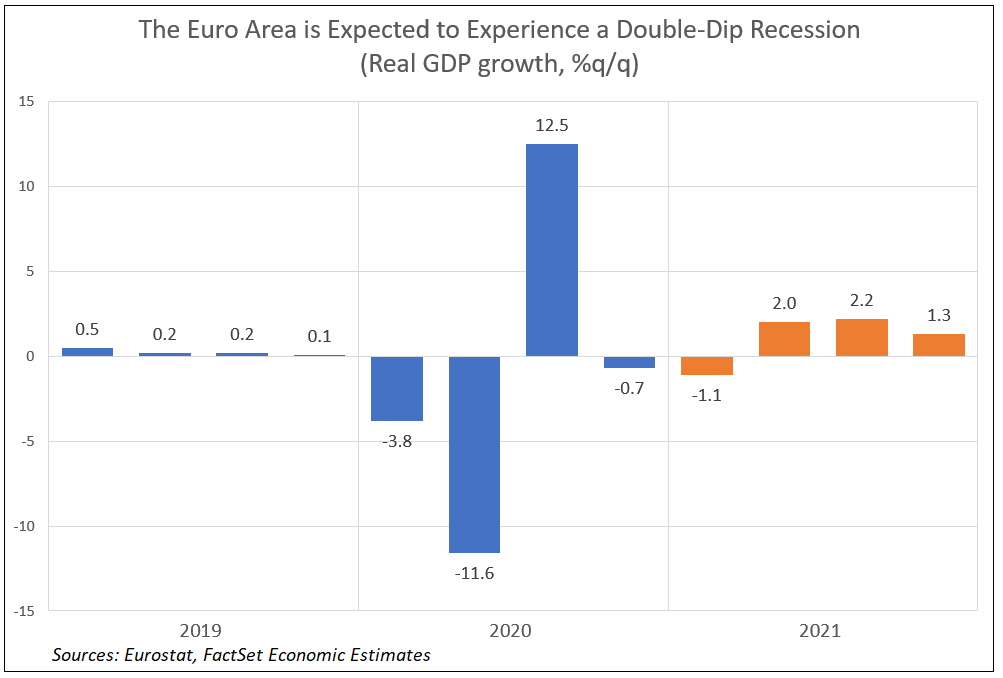 As COVID-19 cases surged in late 2020, England entered its third national lockdown in early January. However, with the UK vaccine rollout accelerating, in late February Prime Minister Boris Johnson proposed a four-step plan to gradually ease restrictions starting in mid-April. To protect struggling businesses and workers, the UK government instituted the so-called “furlough scheme” last March. The program allowed employers to keep employees on their payrolls while the government covered a share of their wages. While the program was initially expected to last just a few months, it has been extended several times and is currently scheduled to run until the end of April. Still, the lockdowns have had a severe impact on employment. 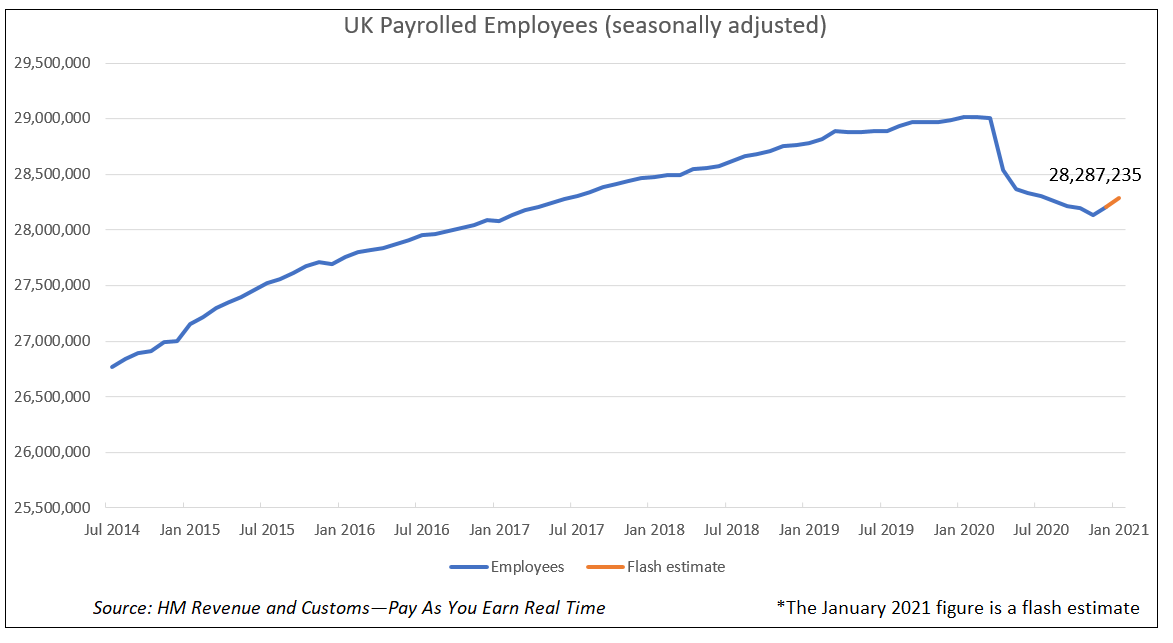 HM Revenue and Customs (HMRC) and the UK Office for National Statistics (ONS) have partnered to produce an experimental monthly estimate of payrolled employees and their pay using HMRC’s Pay As You Earn (PAYE) Real Time Information (RTI) data. This data shows that while payroll employment rose in December and January, payrolls have shrunk by 730,270 over the last year, a decline of 2.5%. At the same time, the UK unemployment rate rose to 5.1% for the three months to December. This was the highest unemployment rate in nearly five years and compares to a 3.8% rate one year ago.

After showing monthly increases for six consecutive months, France’s industrial production shrank in the final two months of 2020. November output fell by an upwardly revised 0.7% while December production dipped by 0.8%, compared to expectations for a slight increase according to analysts surveyed by FactSet. The contraction came after France reinstituted a national lockdown at the end of October to combat the renewed spread of the coronavirus. The slowdown in fourth-quarter activity led to a 1.4% contraction in real GDP compared to the previous quarter, with GDP contracting by 8.2% for the year. Consensus estimates from FactSet Economic Estimates show that analysts expect strong economic growth throughout 2021, although the economy won’t get back to its pre-pandemic size until the second half of the year. 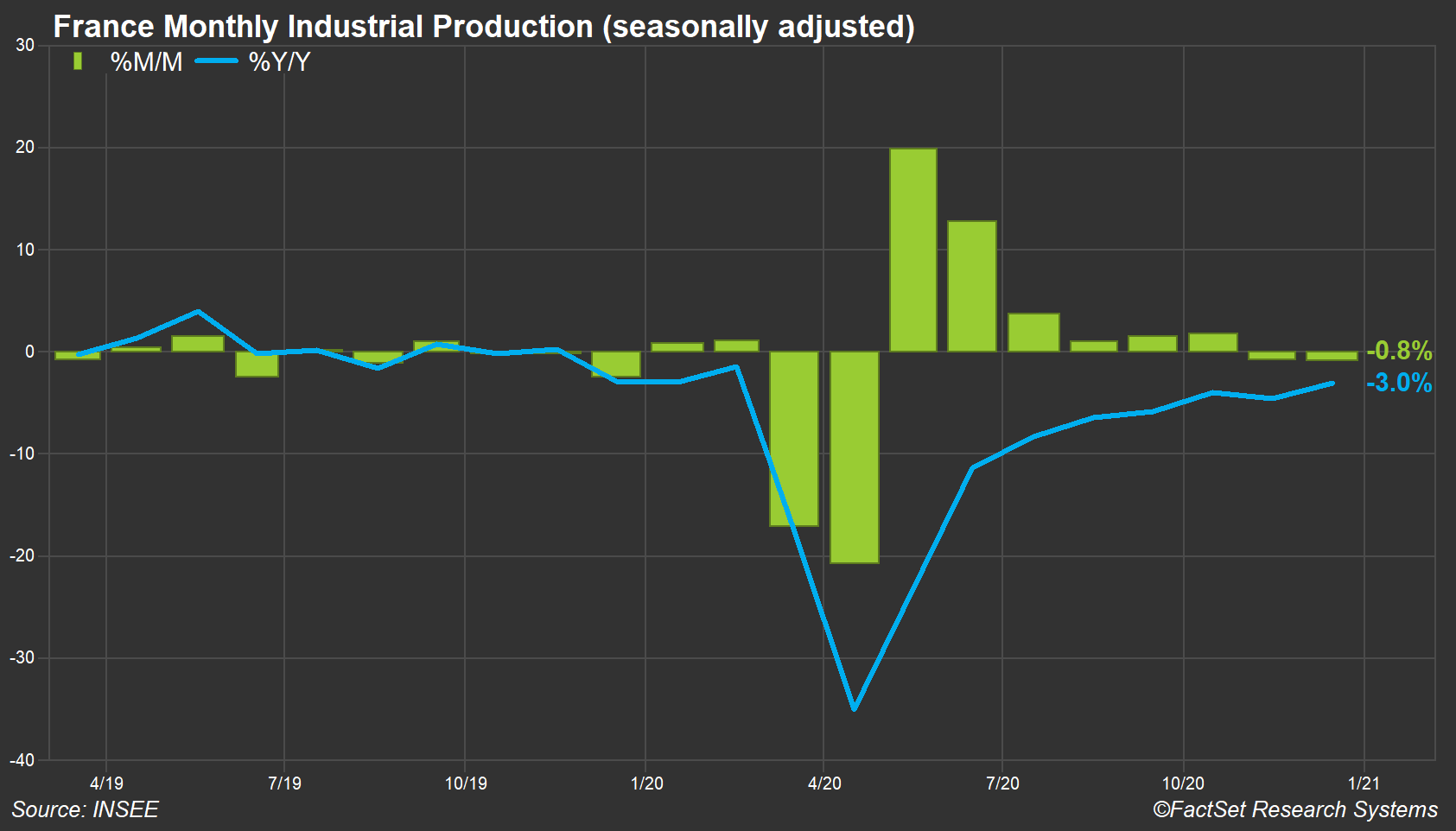 Spain has been one of the worst-hit economies in Europe from the COVID-19 pandemic. Following the difficult period of 2008-2013, when the country suffered through the global financial crisis and then the European sovereign debt crisis, the economy saw six years of solid economic growth. However, this came to a crashing end with the pandemic, with annual real GDP contracting by 10.9% in 2020, the largest GDP decline in all of Europe. According to the World Health Organization (WHO), Spain has seen over 3.1 million COVID-19 cases, ranking it seventh in the world, with over 70,000 deaths. 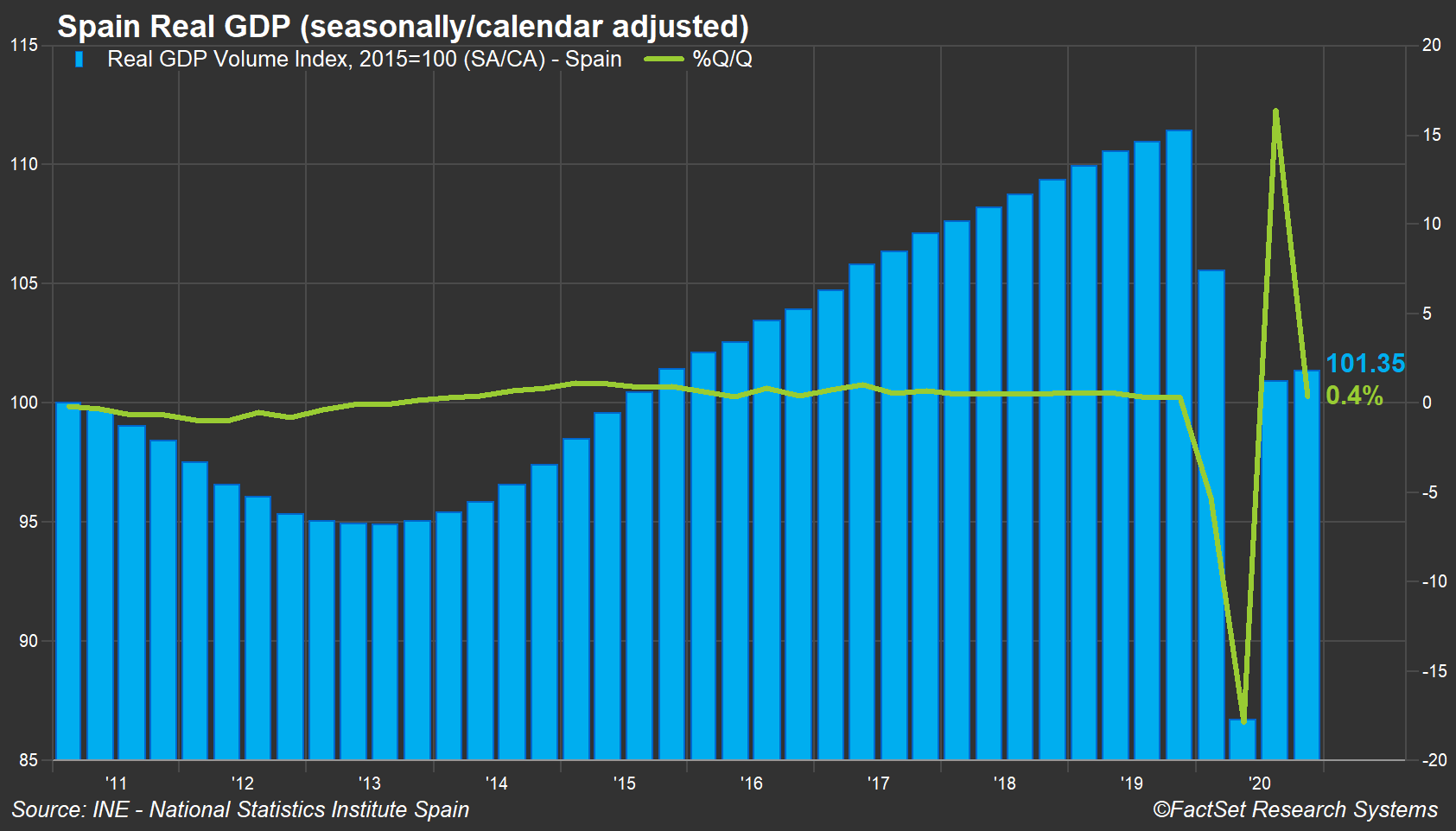 The surge in cases and the resultant strict lockdowns took a heavy toll on the country’s services sector, which represents three quarters of total GDP. While Spain is currently not on lockdown, the country remains under a nationwide curfew through early May. The loss of tourism has been especially damaging to the economy as strict coronavirus testing guidelines have been implemented for anyone entering the country. A key source of tourism, travelers from the UK remained banned at least through mid-March to stop the spread of the UK-variant of the coronavirus.

After rebounding in December, Italian retail sales (value index) fell again in January. On a seasonally adjusted basis, the value of retail sales fell by 3.0% compared to December. Compared to a year earlier, sales were down 6.8%, led by steep declines for shoes, leather goods, and travel items (-36.4%) and clothing (-33.0%). The only bright spots in the report were sales of electric household appliances and audio-video equipment (+11.7%) and computers and telecommunications equipment (+9.9%). On a quarterly basis, seasonally adjusted sales were down 1.5% in the fourth quarter compared to the prior quarter; this contrasts with the quarterly decline of 2.7% in the household consumption component of GDP. This was the largest contributor to the 1.9% decline in GDP in the fourth quarter, followed by trade, as a 1.4% increase in imports outpaced the 0.4% growth of exports. 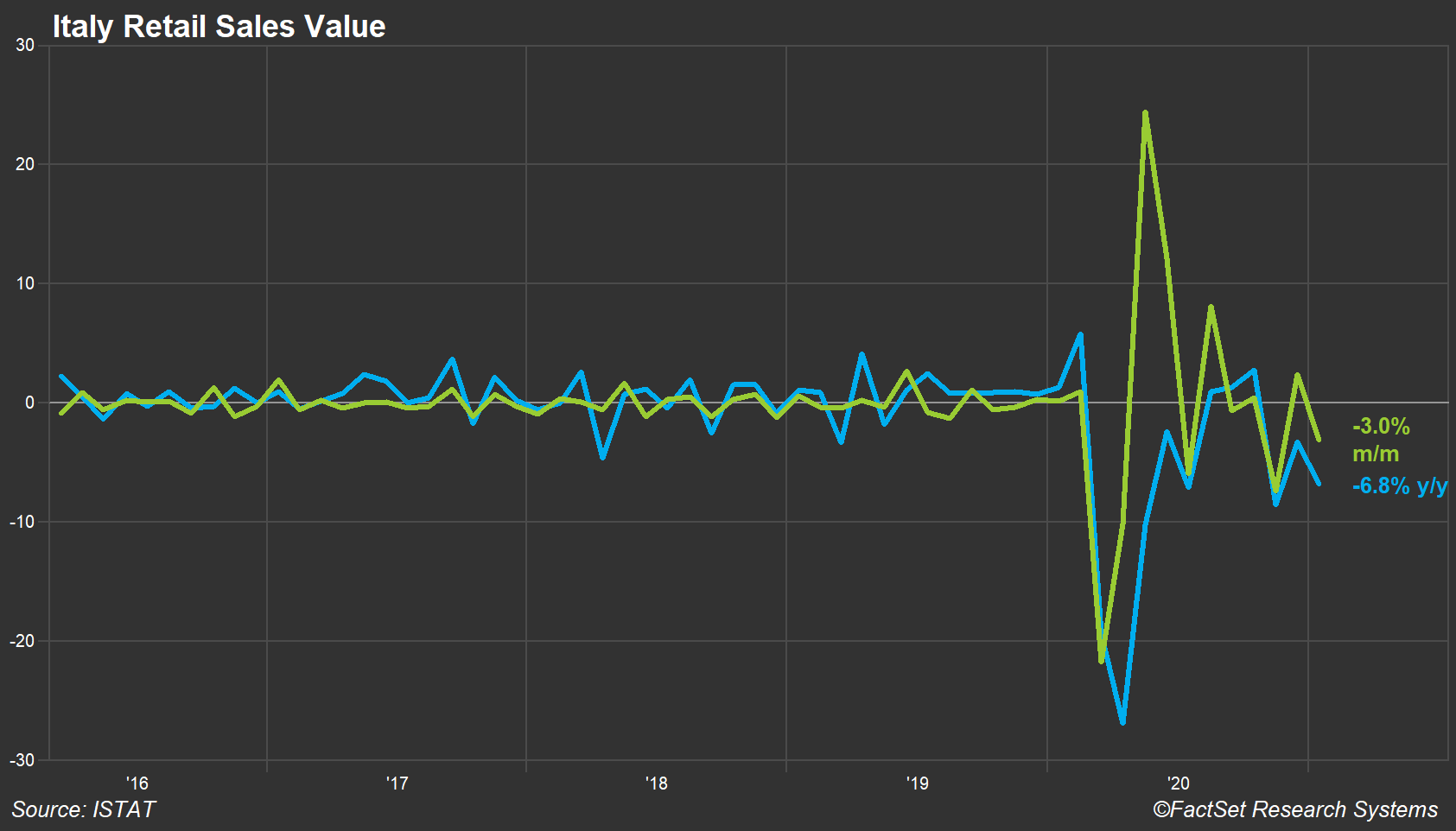