Fourth Highest Amount Spent on Buybacks by S&P 500 Since 2005, Led by Apple

At the company level, Apple was the largest contributor to the increase in dollar-level share repurchases on a year-over-year basis. The company spent $17.0 billion in share repurchases during Q3 2014, which was the highest amount spent by any company in the index and reflected a 240% increase over the yearago quarter ($5 billion). It is important to note that $9 billion of the $17 billion dollar total was a payment for a new accelerated share repurchase arrangement (“ASR”) initiated in August. This marked the second-highest dollar amount spent on buybacks during a quarter by an individual company since 2005 (when FactSet started tracking the data), trailing only Apple’s $18.6 billion dollar purchase during Q1 2014. On a trailing 12-month basis (TTM), Apple has now spent the highest amount on buybacks of all the companies in the index. Apple’s total spending over this time frame ($55.9 billion) is nearly three times higher than IBM’s total spending ($19.3 billion), which is the second-highest amount in the index. 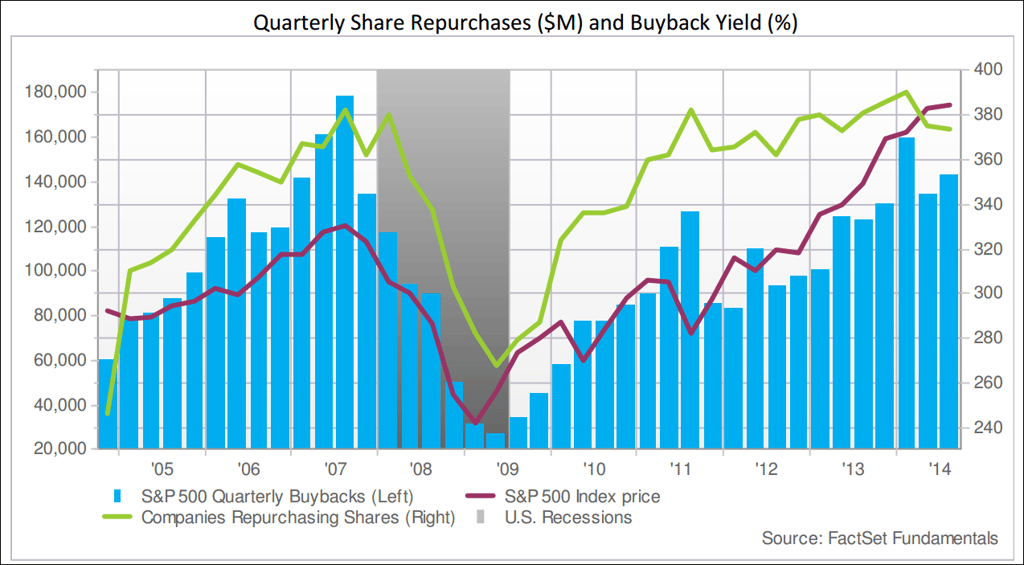 Read more about the buyback activity of the S&P 500 companies and sectors in this quarter's edition of FactSet Buyback Quarterly. Visit www.factset.com/buyback to launch the report now.