While most S&P 500 companies will report earnings results for Q1 2019 over the next few weeks, about 5% of the companies in the index (25 companies) had reported earnings results for the first quarter through yesterday. Given the expectations for a year-over-year decline in earnings for Q1 (and for Q2), have these companies discussed specific factors that had a negative impact on earnings or revenues in the first quarter (or are expected to have a negative impact in future quarters) during their earnings conference calls?

To answer this question, FactSet searched for specific terms related to several factors (i.e. “currency,” “China,” etc.) in the conference call transcripts of the 23 S&P 500 companies that had conducted first quarter earnings conference calls through yesterday (April 11) to see how many companies discussed these factors. FactSet then looked to see if the company cited a negative impact, expressed a negative sentiment (i.e. “volatility,” “uncertainty,” “pressure,” “headwind,” etc.), or discussed clear underperformance in relation to the factor for either the quarter just reported or in guidance for future quarters. FactSet also compared the number of companies citing these factors in the first quarter to the number of companies that cited these same factors in the fourth quarter through approximately the same point in time (through January 11). The results are shown below. 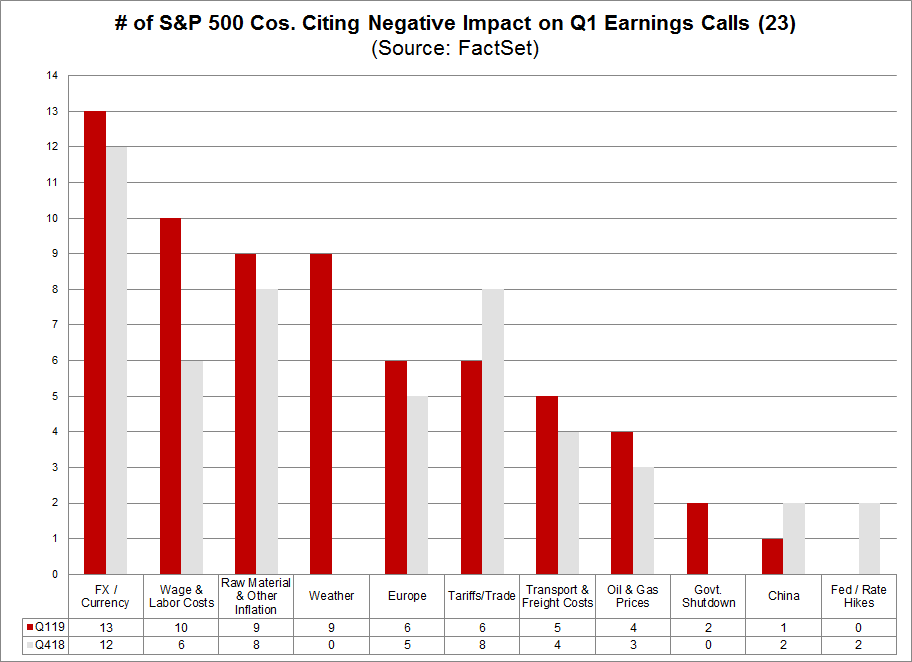 What are Companies Saying?

“Well, we've been talking about higher wages and higher wage growth at AutoZone for over a couple of years now. We did take that significant step as Bill mentioned in the latter part of the first quarter and we significantly increased the compensation of our most tenured and talented and knowledgeable AutoZoners at the hourly level, the ones that are closest to the customer. That will anniversary itself as he mentioned in the latter part of this first quarter. That said, I do think that you have two parts of the wage story that have been going on. One is the regulatory fees, where in places like California, they're on a path to $15 an hour and that's going to happen every year or every six months depending on if you're in a municipality or at the state level. So, those increases are going to continue. It still feels like to us that there is even outside the regulated areas that there is more wage pressure than there has historically been.” -AutoZone (Feb. 26)

“Moving to SG&A. Our SG&A percentage Q2-over-Q2 was lower or better by 2 basis points both with and without the adjustments coming in at 10.0% of sales this year compared to 10.02% last year…In terms of that 2 basis points better, we feel it's a pretty good result given that we're still facing the headwinds from the U.S. wage increases to our hourly employees that went into effect last June 11, 2018. As mentioned in the past couple of fiscal quarters, those wage increases negatively impacted SG&A by about 7 to 8 basis points during Q2 year over year. And it'll continue to impact SG&A comparisons through Q3, which ends May 12, and into the first month of our 16-week fiscal fourth quarter to anniversary on that June 11. Additionally, this past Monday we began our new three-year employee agreement. With the new agreement, we announced that we're taking our starting wages from $14 and $14.50, up to $15 and $15.50 per hour in both the U.S. and Canada. In addition, we're also increasing wages for supervisors and also introduced paid bonding leave for all hourly employees. These items are incremental to the usual annual top-of-scale wage increases that are typically done each March.” -Costco (Mar. 7)

“FedEx Ground operating results were negatively impacted by the inflationary impact of the tight labor market on our purchase transportation rates and employee wages.” -FedEx (Mar. 19)

“We are pleased with the gross margin expansion and our ability to overcome the weather and holiday challenges, as well as continued wage pressures, increased commodity costs such as for hangers, which are sourced mostly from China and the inefficiencies that are customary with an acquisition, integration and an ERP system implementation.” -Cintas (Mar. 21)

“First of all, we talked about overall labor inflation of about 3.5% to 4.5% in general. We're seeing hourly wage inflation higher than that, so above 4%, somewhere between 4.5% – around 4.5%. So others are talking about inflation, but they're probably focusing more on the hourly inflation and we're seeing that. That said, we're being more productive with our team because our turnover is so much lower.” -Darden Restaurants (Mar. 21)

“For gross margin in Q4, we expect expansion of roughly 75 basis points, ending the fiscal year with gross margin expansion that will have exceeded our long-term financial model. While we expect continued strong full-price sell-through and strong growth through our higher-margin NIKE Direct businesses, that is partially offset in Q4 by higher input costs, specifically cotton, chemicals and labor, FX sourcing headwinds, and the shift of supply chain investments from Q3 into Q4.” -NIKE (Mar. 21)

“Sequentially for the first quarter over the fourth quarter, we had a very small increase of just 0.6% in our average construction cost per square foot. This is meaningful as the industry still faces the headwinds of the ongoing labor crisis, which puts pressure on labor costs along with material cost pressures that come from tariffs, factory labor shortages, stricter energy codes and all without the benefit of the lower lumber cost, which will materialize later in the year.” -Lennar (Mar. 27)

“Adjusted operating income declined 11.9% in the quarter. Continued SG&A savings, procurement savings, and pharmacy volume growth were not sufficient to offset the unusually high year-on-year impact from reimbursement and underperformance in the front-of-store. This result included store and labor investments of $40 million in the quarter, equivalent to approximately 240 basis points of adjusted operating income.” -Walgreens Boots Alliance (Apr. 2)

“We expect gross margin to be flattish as cost inflation headwinds primarily related to glass, raw materials, transportation, and labor cost in Mexico are expected to be mostly offset from product pricing and productivity initiatives.” -Constellation Brands (Apr. 4)

“And so I gave them a caution for Q2. But in answer to your question are we seeing underlying inflation in labor rates, if I think of people that are working in our distribution centers throughout the organization, yes, we're seeing inflation rates of the economy. One of the things that's masking it a bit right now is the fact that our incentive comp isn't expanding at the pace it was the last couple years, and that's why our incremental margin is shining through, things we talked about in the past.” -Fastenal (Apr. 11)

Excluding Just Three Industries, S&P 500 Would Be Reporting Earnings Growth of 4% for Q3

The S&P 500 is reporting a year-over-year decline in earnings because three industries are reporting unusually large earnings...