How Important Is an Industrial Activity Slowdown to Overall Economic Growth?

Now that the current U.S. economic expansion is on record as the longest in post-war history (10 years and counting), we are seeing an uptick in the predictions of an inevitable recession. Since history is all we have to rely on, economists are forced to look at past recessions to glean information that could help them predict future downturns. While the eternal optimists (yes, some economists are optimists) will continue to argue that “this time is different,” there are several indicators sending negative signals...and perhaps we should be listening to them.

One of the key segments of the economy that has reliably raised red flags in the past as a harbinger of economic downturns is the industrial economy. However, one can make a credible argument that the industrial portion of the U.S. economy is a far less significant share of the overall economy in 2019 than it was 50 years ago. 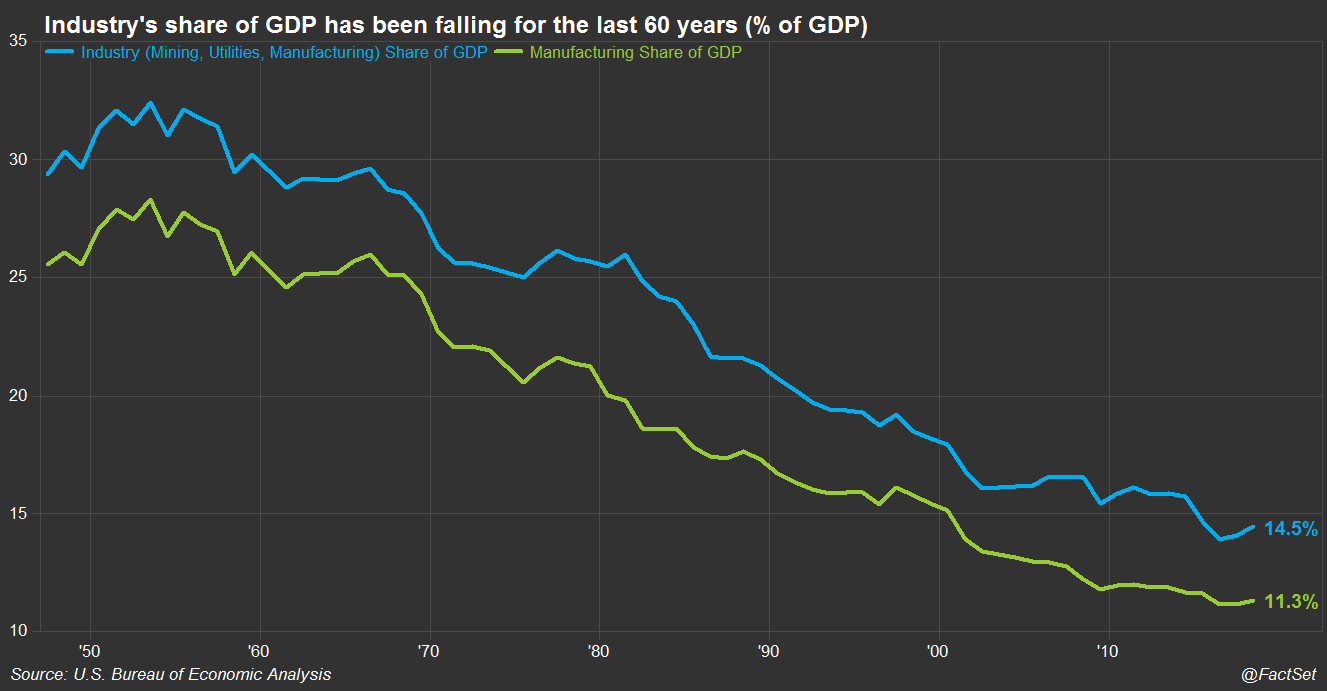 We witnessed the impact of the industrial sector's decline in importance during the current economic expansion. During the “growth recession” of 2015-2016, industrial production contracted by 1% in 2015 and 2% in 2016. Financial markets reflected what was happening in the industrial economy—U.S. major stock market indices contracted in 2015 and we saw IPO volume shrink by 37.5% in 2015 and 32.3% in 2016. Real GDP growth eased but never went negative during this period, with the economy expanding by just 1.6% in 2016. The contradictory data point during this period was unemployment. Between January 2015 and December 2016, the unemployment rate fell from 5.7% to 4.7% as service-producing industries added 4.2 million jobs.

Fast forward to 2019, where we are getting a lot of negative signals from the industrial side of the economy. How important are these indicators in telling us the outlook for the overall U.S. economy? 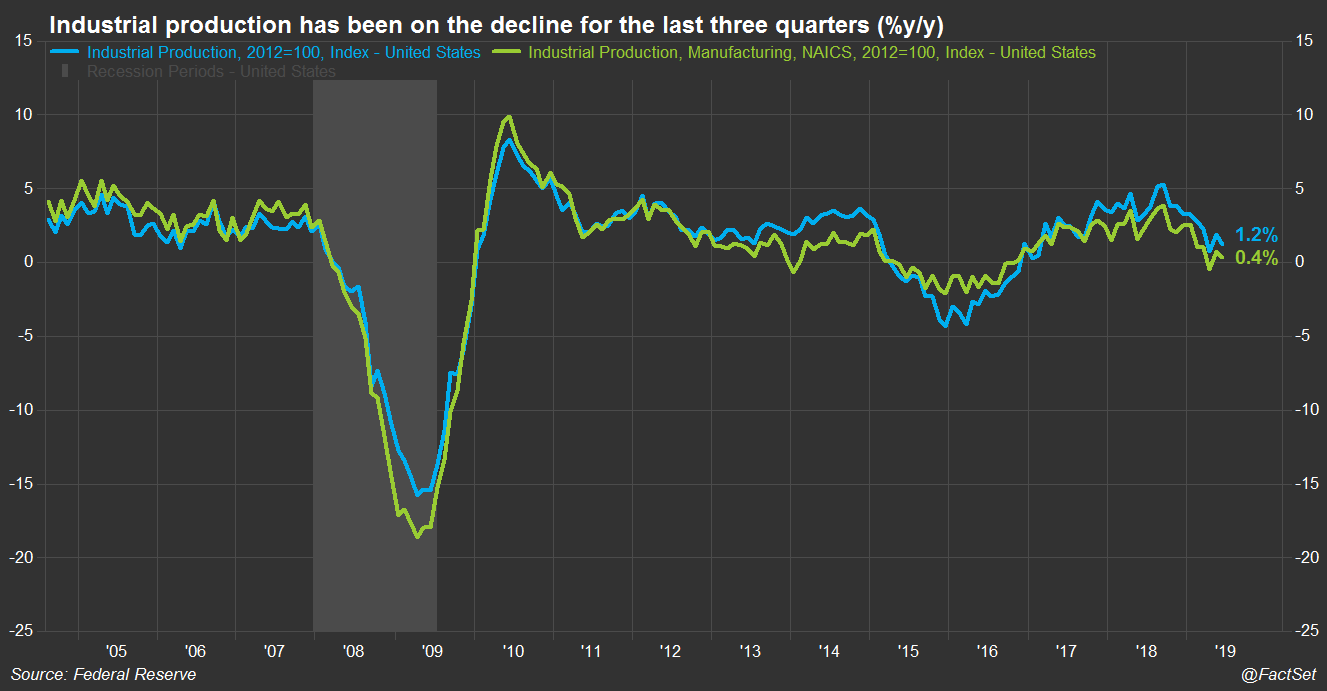 Railroad Traffic Is Down in 2019

Mirroring the slowing trend we see in the industrial production and capacity utilization data, rail traffic is down on a year-over-year basis. Even in the digital 21st century, the volume of freight carried over U.S. railroads is still considered a barometer for the nation's economic activity. According to the Association of American Railroads (AAR), for the week ending July 27, total U.S. rail traffic (including carloads and intermodal units) is down 4.4% from a year ago. On a year-to-date basis, traffic is down 3.4% compared to last year. Intermodal traffic, which is driven by global trade, has been especially hard hit due to the escalation of the trade war with China. Weekly data shows intermodal volume down 5.3% from a year ago for the latest week and down 3.6% year to date.

U.S. railroads are feeling the pinch. CSX Corporation, Norfolk Southern Corporation, and Union Pacific all mentioned the challenging freight environment in their second quarter earnings calls. During CSX’s July 18 call, Mark Kenneth Wallace, Executive VP Sales and Marketing, stated “there are signs of slowing the economic conditions in both IDP and GDP for Q3 and Q4, pointing to a less robust economy in H2. We’ve obviously seen evidence of this in our own business, and now see a softer industrial environment, with signs in our automotive, chemicals and metals segment.”

Despite this pessimistic language, railroad stocks are outperforming the overall market. Analysts appear to be rewarding these companies for their rising productivity and cost-cutting initiatives. In its second quarter earnings call, Union Pacific noted an 8% decrease in workforce levels accompanied by a 4% year-over-year increase in productivity. Similarly, Norfolk Southern noted decreases in head count-related expense, materials expense, and equipment rents in the second quarter. 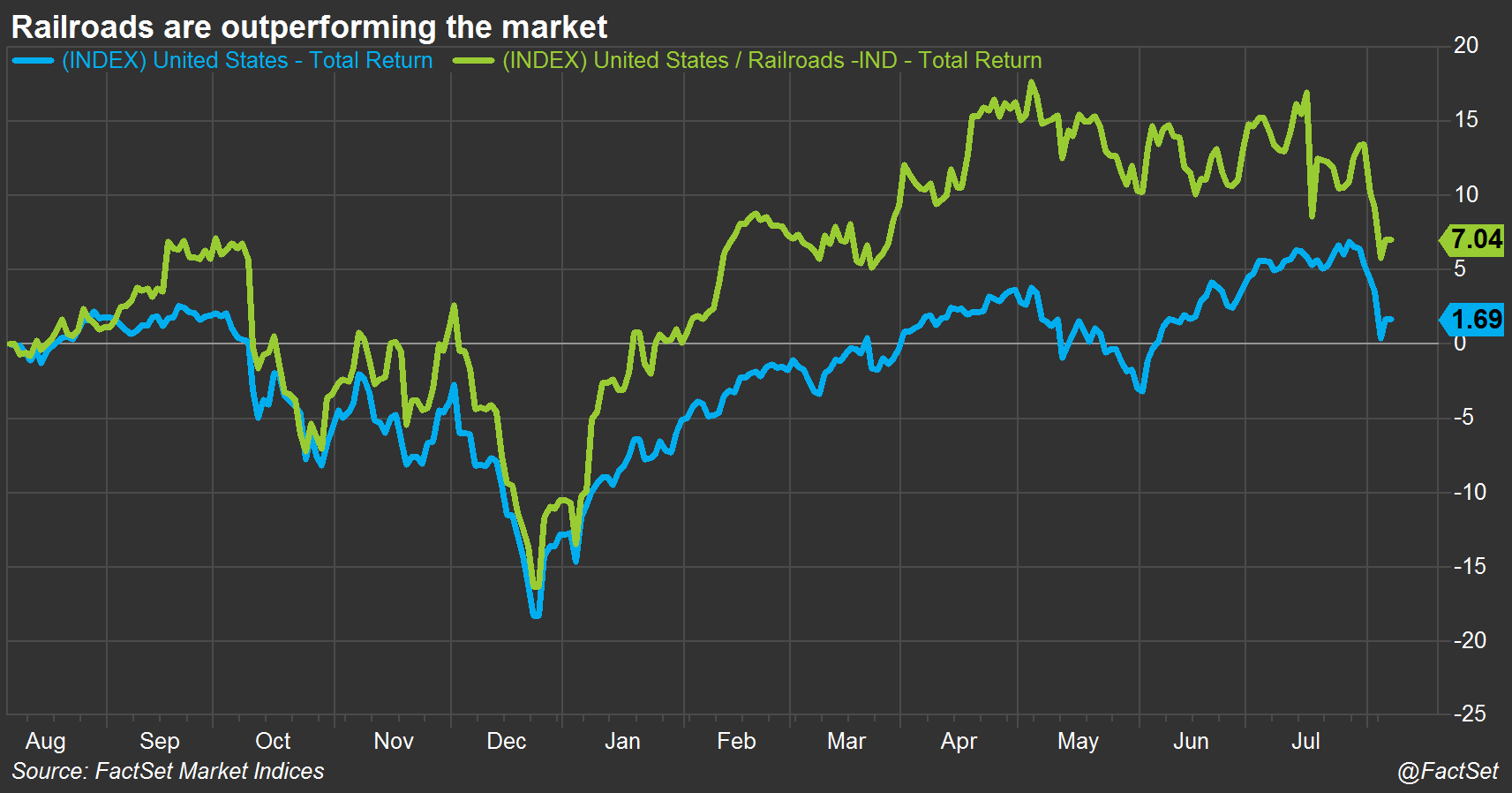 As noted above by CSX, railroads are seeing weakness in their automotive shipments, a sign of a possible slowdown in the auto industry, which makes up nearly 3% of U.S. GDP. After four consecutive years of annual vehicle sales above 17.5 million units, the market appears to be retreating. While total vehicle sales inched up by 0.9% in 2018, in the first half of 2019 sales are down 1.6% from the previous six-month period and down 1.3% compared to the first half of 2018. Anecdotal evidence suggests that dealers are stocking fewer vehicles in response to sluggish demand. If the slowdown in vehicle sales accelerates, this will ultimately impact production and lead to layoffs in the auto industry.

The manufacturing Purchasing Managers’ Index (PMI) published by the Institute for Supply Management (ISM) is based on a monthly questionnaire completed by purchasing and supply executives from across the United States. The report is an important barometer of manufacturing activity that is used as a leading indicator of the overall economy. According to the ISM, “the responses of the committee members mirror the economic activities of the manufacturing sector, nationally, ensuring a report that accurately represents current business conditions.” An index reading above 50 indicates an expansion in overall activity while a reading below 50 indicates contraction.

In July 2019 the manufacturing PMI fell to 51.2, its lowest level in nearly three years. Even more noteworthy than the current level is the rapid pace of the measure’s decline. The PMI has declined in eight of the last 12 months and the July 2019 reading was 7.2 points lower than July 2018. Similarly, the ISM’s non-manufacturing PMI has dropped rapidly in recent months, hitting a near three-year low of 53.7 in July 2019. The current reading is 7.1 points below the series cyclical peak in September 2018.

Analysts were caught off guard last week by the large negative surprise for the latest Chicago PMI. The Chicago PMI measures business conditions in the Chicago region and is often used as a predictor for the ISM PMI. This measure dropped to 44.4 in July, well into contraction territory and well below the 51.5 consensus of analysts surveyed by FactSet. This index has plummeted by 19.4 points since the beginning of 2019 and is now at its lowest level in 3.5 years.

In addition to the national and Chicago PMIs, five of the Federal Reserve’s regional banks publish indices reflecting manufacturing conditions in their respective regions. Following an unprecedented stretch of nearly synchronized, strong regional PMI readings in 2017 and 2018, most of these regional manufacturing survey readings have fallen off sharply in 2019. Note that these surveys are all reported as diffusion indices, calculated as the percentage of positive responses minus the percentage of negative responses.

Three of the five Fed regional surveys report negative readings for July: Richmond (-12), Kansas City (-1), and Dallas (-6.3). The Richmond Fed’s manufacturing index has a particularly weak July reading, slipping 14 points to its lowest level since January 2013. While both the Philadelphia and New York (Empire State) surveys rebounded in July, the Philadelphia survey has been extremely volatile in recent months and the Empire State index reading was 17.7 points lower than a year ago. 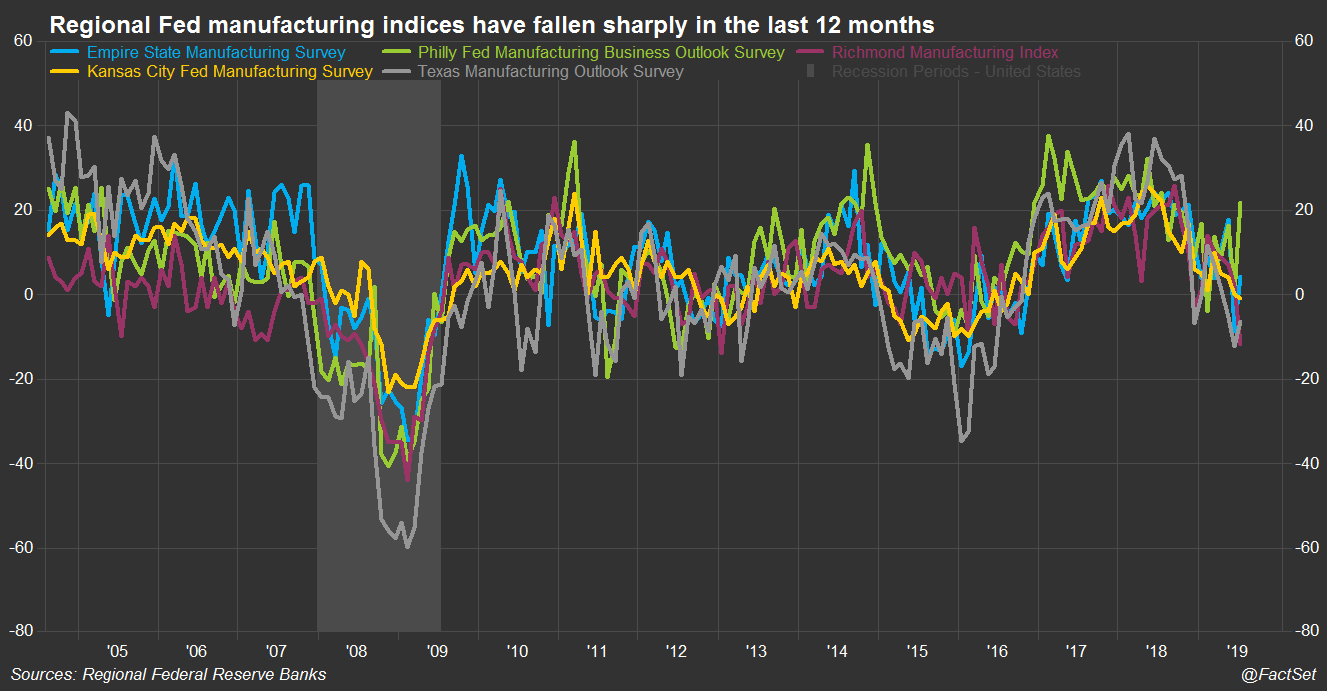 Rising global trade tensions in the wake of U.S. tariffs on steel, aluminum, and lumber imports, as well as those targeted specifically at China, are directly impacting manufacturing activity. The National Association for Business Economics (NABE) produces a quarterly Business Conditions Survey that looks at the conditions affecting respondents’ firms, including demand, prices, costs, wages, employment, and profit margin.

Increasing tariffs are not just impacting U.S. manufacturing. We’re seeing a slowdown in global manufacturing activity as evidenced by the dramatic decline in many countries’ manufacturing PMI readings over the last 18 months. Within the G7, only the U.S. and Canada are currently showing expanding manufacturing sectors (51.2 and 50.2, respectively), with PMIs for the rest of the G7 having now slipped below 50. Germany is showing the biggest deterioration in manufacturing activity with the PMI having fallen from 63.3 in December 2017 to 43.2 in July 2019. 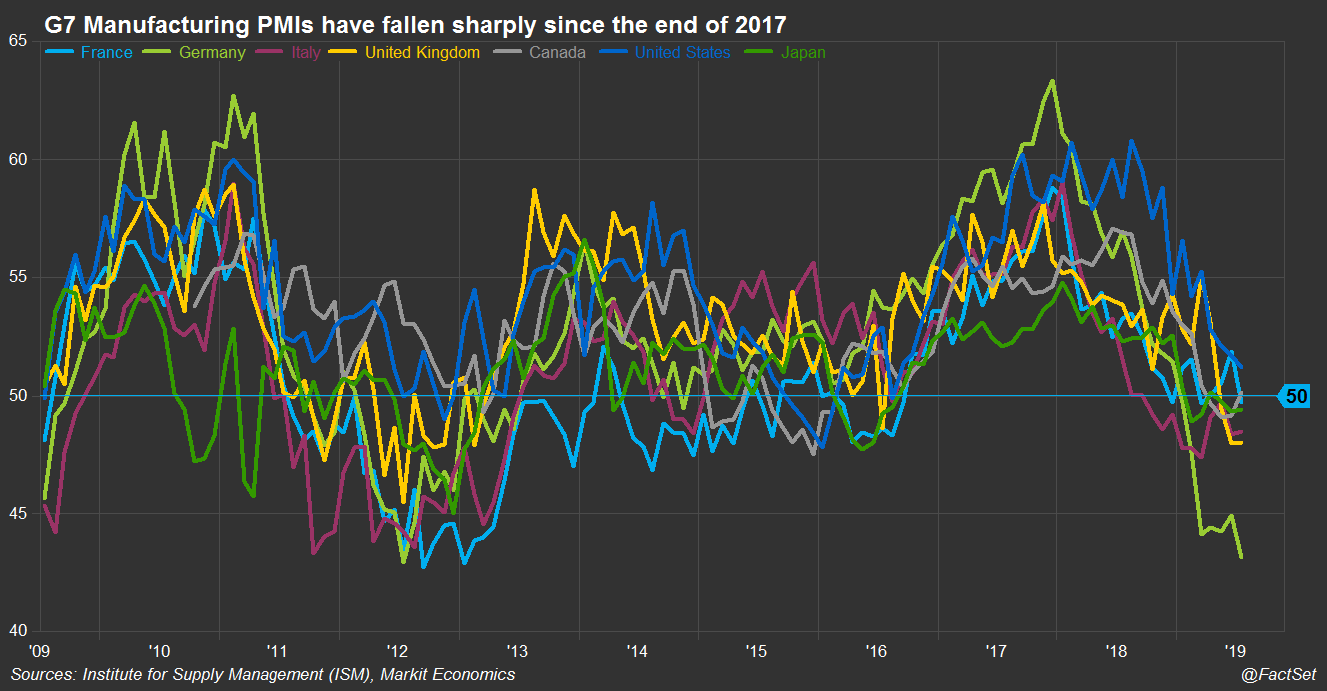 On the Bright Side

While the latest industrial production, capacity utilization, rail traffic, and PMI data are all giving us negative signals, one popular leading indicator is still pointing to strong industrial activity.

The Census Bureau’s monthly data on orders of nondefense capital goods excluding aircraft is often used as a proxy for business spending plans. We’re currently getting a very strong signal from this indicator with orders jumping to $69.8 billion in June, above the series’ 12-month moving average of $69.2 billion. The direction of this series over the next 6-12 months will tell us a lot about economic activity. 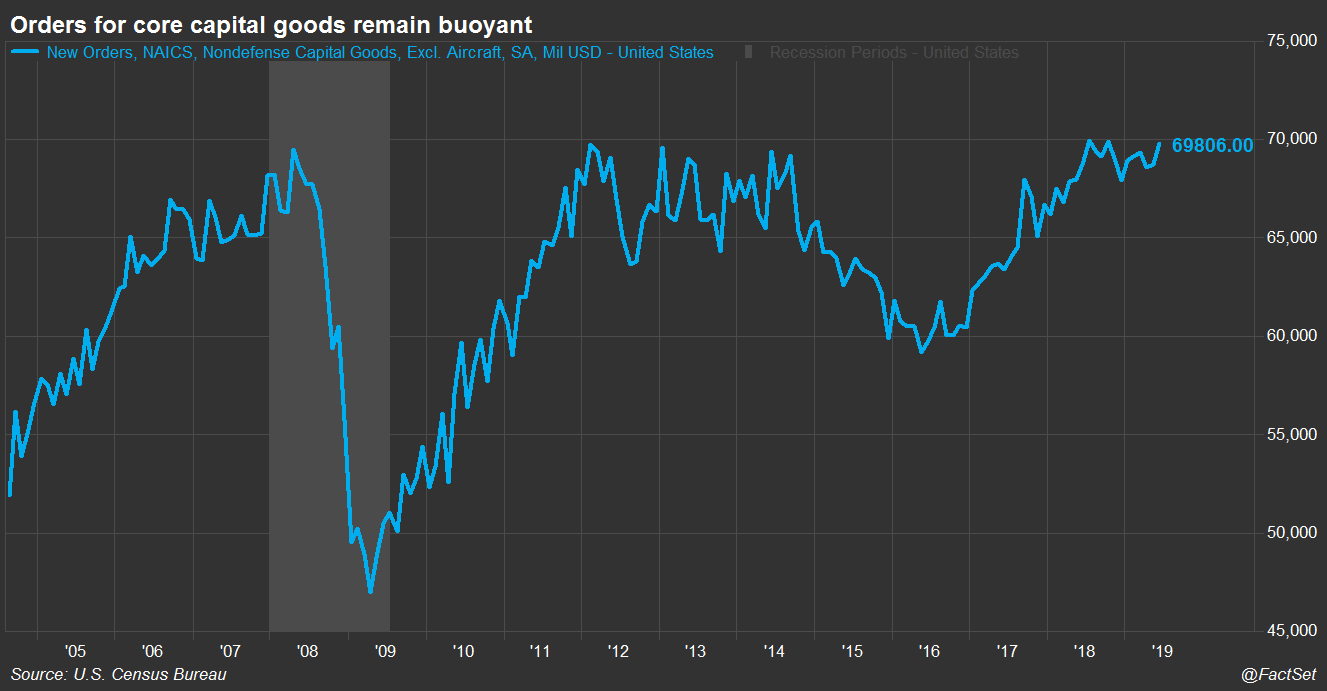 While most of the indicators we have available to measure the industrial economy are flashing red, it's not clear whether these will prove to be accurate predictors of a broader economic contraction. We only have to look back three years to find evidence to question the connection between the industrial sector and the overall economy. However, one can also argue that the various segments of the economy are more intertwined than ever before—both domestically and on a global basis—and industrial output remains an important area to watch.