Understand entity and company-specific exposure to emerging technologies that are likely to disrupt the real economy in the future. Emerging technology themes include Autonomous Vehicles, Deep Learning, and Quantum Computing.

Figure 1: Company Coverage by Region Over Time (Number of Companies) 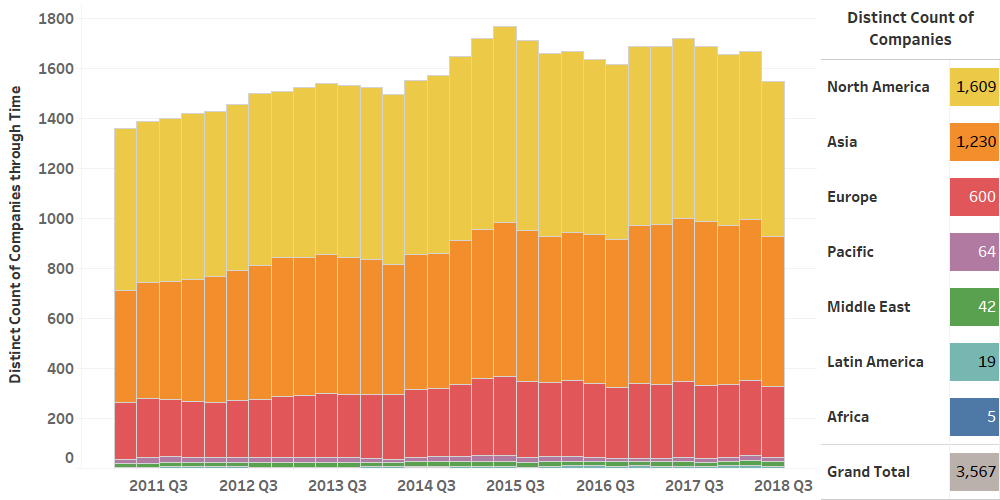 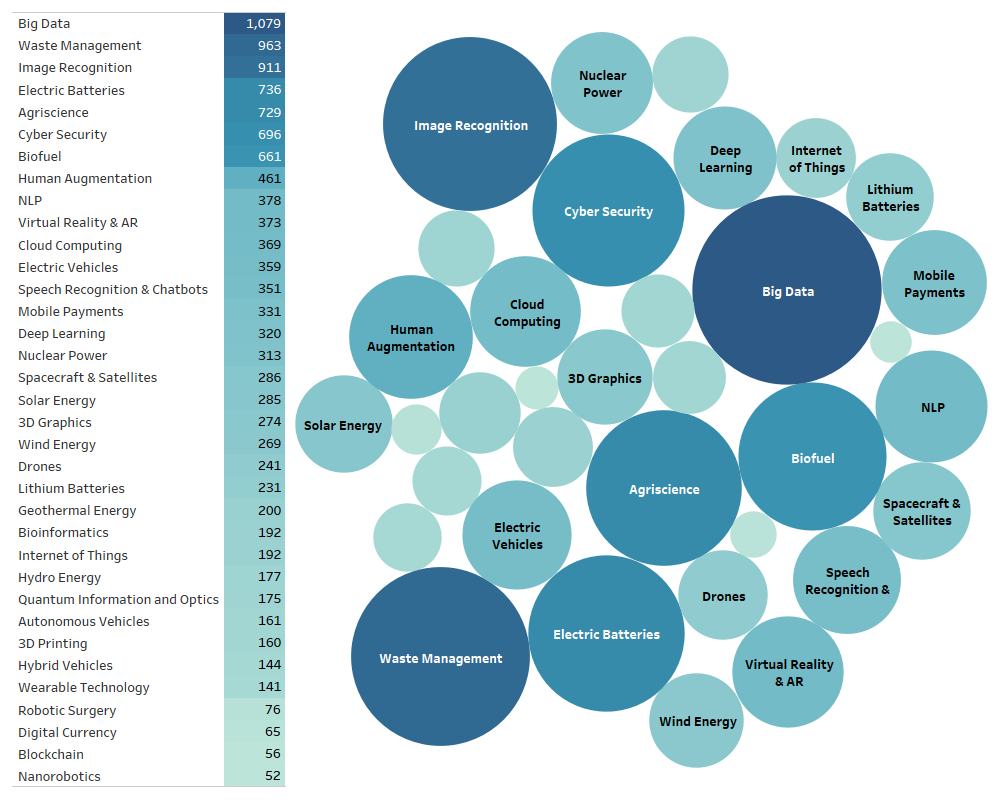 In addition to defining which companies are linked to specific emerging technologies, several scores/factors are also provided:

These scores/factors are designed to unlock additional insights into company investment in specific emerging technologies. Figure 3 summarizes the overall process involved in their creation. 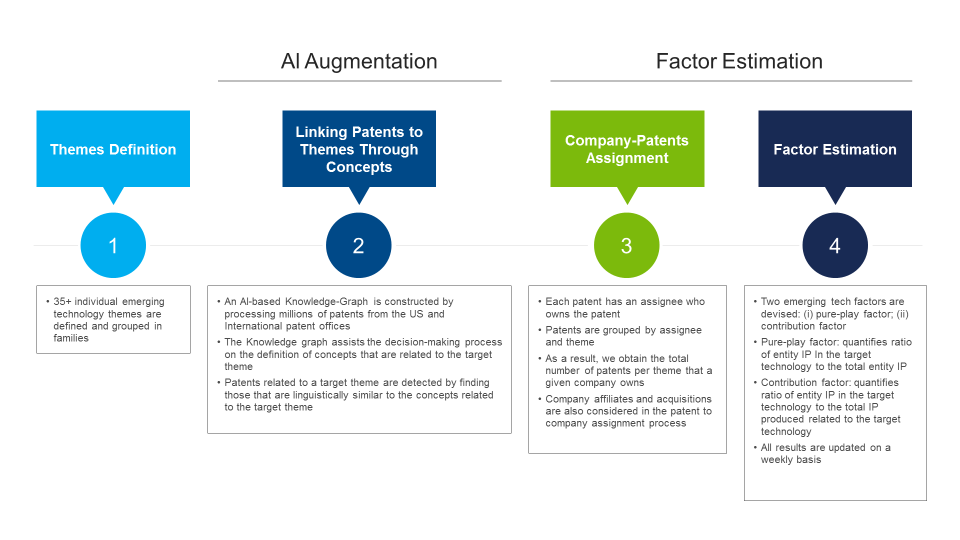 While the Emerging Technologies Data Feed contains information on many exciting and disruptive technologies, one in particular has emerged recently on a global scale: Electric Vehicles (EV). From EV-only producers like Tesla to the big auto companies like Toyota and Ford, most auto manufacturers are making a big push into the EV market (for this example, we will exclude related categories of electric/lithium batteries, hybrids, autonomous vehicles, etc). Figure 4 highlights the companies that have been filing patents in this emerging technology. 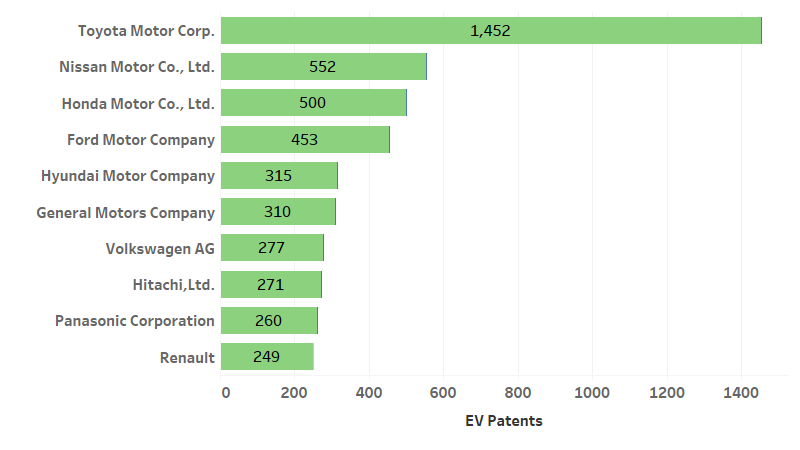 Toyota has over 1,400 granted patents related to EVs, almost 2.5x more than the next closest company. By analysing the trends of the contribution and pure-play ratios displayed in Figure 5, we can gain further insights into the EV market. Toyota’s average contribution ratio (on a range of 0 to 1) of 0.154 indicates that it has provided a significant impact to the overall EV technology, but its impact is declining over time as other companies file new patents. The average pure-play ratio of 0.076 (also a range of 0 to 1) indicates that EV-related patents are not the only emerging technology of interest; in fact, Toyota has patents in 29 of the 35 emerging technologies that Yewno has identified.

We can also look at companies that have a greater focus on EVs as one of their main emerging technology themes, even though they may not have a large number of patents relative to Toyota. The other five companies noted in Figure 5 all have average pure-play ratios above 0.2 on average (compared to Toyota’s 0.076), indicating their relatively high exposure to EVs. Some of these investments are fairly recent, such as Bollore, while others such as Tesla and RWE AG were much earlier. If your goal is to find companies with significant exposure to a specific emerging technology, Yewno’s Emerging Technology Data Feed can provide that insight.

We can take this one step further and commingle this data with FactSet RBICS Focus, which will show company exposure to these same technologies based on their industry classification. If we continue with Toyota as our example and look at the Conventional Engine Car Manufacturers Industry (Level 6), we can see the entire industry’s overall exposure to EVs. 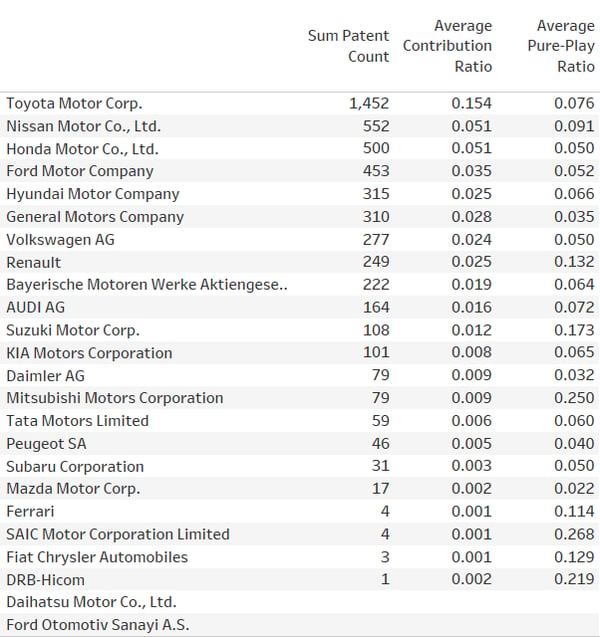 There are also companies outside of the expected group of automotive companies shown above that have exposure to EVs. The companies highlighted in Figure 7 represent the highest-ranking company in their respective industry in terms of EV granted patents.

Figure 7: Top Companies in Other Industries with EV Exposure 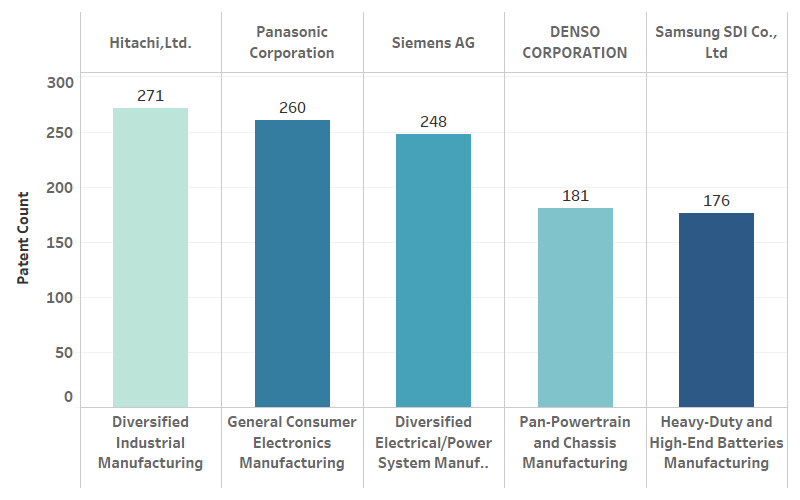 There are also several ETFs that give investors a chance to take advantage of these emerging technologies. In Figure 8, we break down the constituents of one such ETF, KraneShares Electric Vehicles & Future Mobility Index (KARS-US), using several datasets: 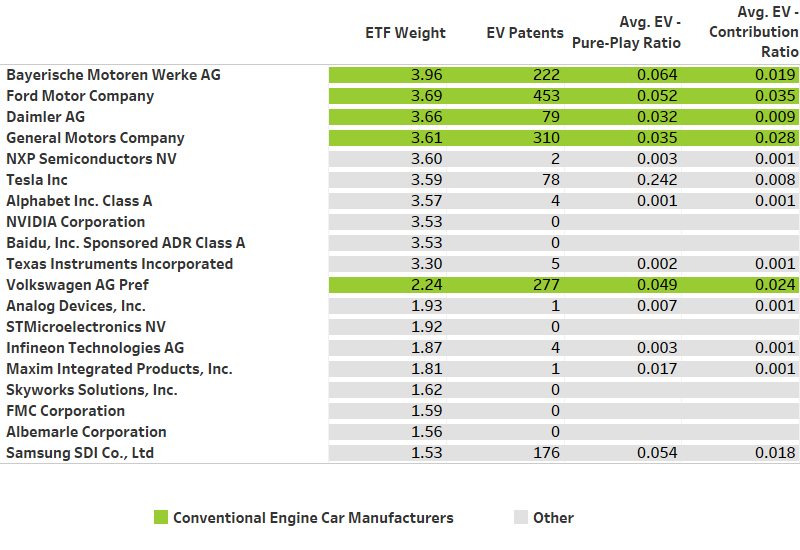 By linking Yewno’s Emerging Technologies Data Feed with other content, such as FactSet’s RBICS Focus or ETF Detail Holdings, we can begin to dissect the impact and prevalence of investment in emerging technologies.