As 2016 comes to a rapid conclusion, the annual inundation of wrap ups and prognostications is in full swing. Tis’ the season of giving, so indulge me while I add one more yule log to the fire!

Earlier this year, I wrote about the need for fixed income investors to better understand geopolitical risk, refocus on fundamentals, and incorporate their economic expectations into the investment process. So post-Brexit/-Trump/-Italian referendum/-Fed move, how have my views evolved over the rest of what has been the strangest year in recent memory?

We are not out of the woods, friends. The first quarter of 2017 alone will see president-elect Trump’s inauguration (and what should be a Tweet-heavy first 100 days in office), the potential for further populism via the Netherlands general election, and the probable invocation of Article 50 to formally start the Brexit process (barring a Supreme Court decision that would only add to the confusion). The remainder of 2017 brings elections in France and Germany, a new National Congress in China, major regional elections in India, and potential for ongoing governance issues in Brazil, Italy, and South Africa. Oh, and by the end of 2017, we’ll assuredly be talking about the 2018 mid-term elections in the U.S. (thank you, 24 hour news cycle!).

So what does that mean for fixed income investors? As in real estate, it’s all about location! More than simply understanding their portfolio’s current exposure, savvy investors should actively seek geographic tilts based on market attractiveness. The U.S. looks strong relative to other G20 countries (taking the real estate piece one step further – it may be the best house in a bad neighborhood). For global investors, identifying credits with material exposure to the U.S. market should see outperformance in terms of favorable spread movement, upgrade potential based on improved issuer financials, or via currency carry (yes, carry is back!). 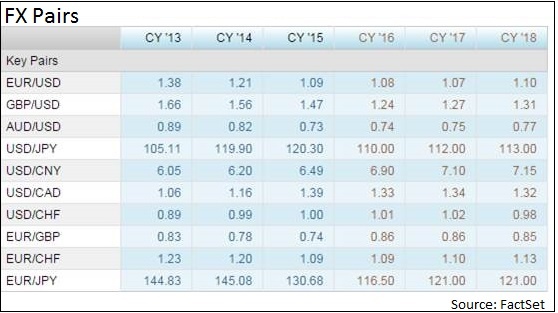 The biggest unknown in this scenario is the currency impact. As of this writing, GBP/USD is sub 1.25 (down 17% YTD), EUR/USD is sub 1.05 (the weakest since 2003), and USD/JPY is at 117.5 (nearly 17% above the August 2016 lows). Currencies can be volatile, but with the scope of the global geopolitical calendar in 2017, barring surprises in inflation expectations, USD strength has more tailwinds than headwinds in the short and intermediate term. Non-U.S. investors should leverage this divergence for Alpha generation.

If Trumponomics can approve and implement some sort of infrastructure spending, as opposed to an overreliance on tax breaks (which historically are the weakest value-add tool of fiscal policy), then basic industry, capital goods, and energy become relatively attractive industries. U.S. investors must continue to perform proper underwriting and fully vet term structures to see Alpha from sector rotation and security selection.

Well, it happened. The Fed moved again. The real question now becomes not “if” rates will rise in 2017, but “by how much?” Reviewing the dot plot, many may be baking in a 50-75 bps move in the Fed Funds rate for 2017. But remember those two weeks after the U.S. election, where U.S. yields backed up 50 bps to contribute to the worst bond rout in 25 years? What if that continues, or if we see additional flattening of the curve? Further, we could see a range in treasuries and a re-pricing of credit (particularly in high yield). And that is just the U.S.

UK investors are already seeing inflationary signals while macro indicators remain vulnerable to Brexit. Euro investors have to deal with a low- or no-growth environment, the weakest currency in over a decade, and a technocratic government mechanism that still thinks austerity is the best policy.

For advisors, client relations, and institutional sales professionals, the challenge becomes explaining this in a meaningful way to downstream investors. The gift of low observable and expected inflation is that fixed income is still not in dire straits – proper analysis around carry, reinvestment rate assumptions, and projected returns and income streams over a defined investment horizon should ease the pain (or at least provide fundamental tools to counter behavioral finance tendencies). For institutional managers and clients, understanding the true exposure of your portfolios to these types of scenarios in today’s liquidity-constrained environment becomes paramount.

In summary, 2016 was an extraordinary year. Based on what I see on the horizon, 2017 has an opportunity to be even more interesting. Understanding the implications of “why” you own a position will continue to be more important than understanding the basics of “what” you own – at least in terms of properly analyzing the risk/return tradeoff in the hunt for Alpha.

Missed our 2017 fixed income forecast from Bill McCoy and his friend Captain Obvious? Catch it here: The "Obvious" Fixed Income Forecast for 2017