The PrivCo 50 examines the fastest-growing startups in the U.S. In December 2020, we released our first report looking at the top-performing companies during the pandemic (i.e., full-year 2020). In 2021, we go deeper and look at quarterly activity, beginning with this Q1 report. To generate this report, we looked at data from PrivCo and evaluated startups by their employee and revenue growth as well as funding raised in Q1 (i.e., January 1 to March 31, 2021) and ranked them based on the results. 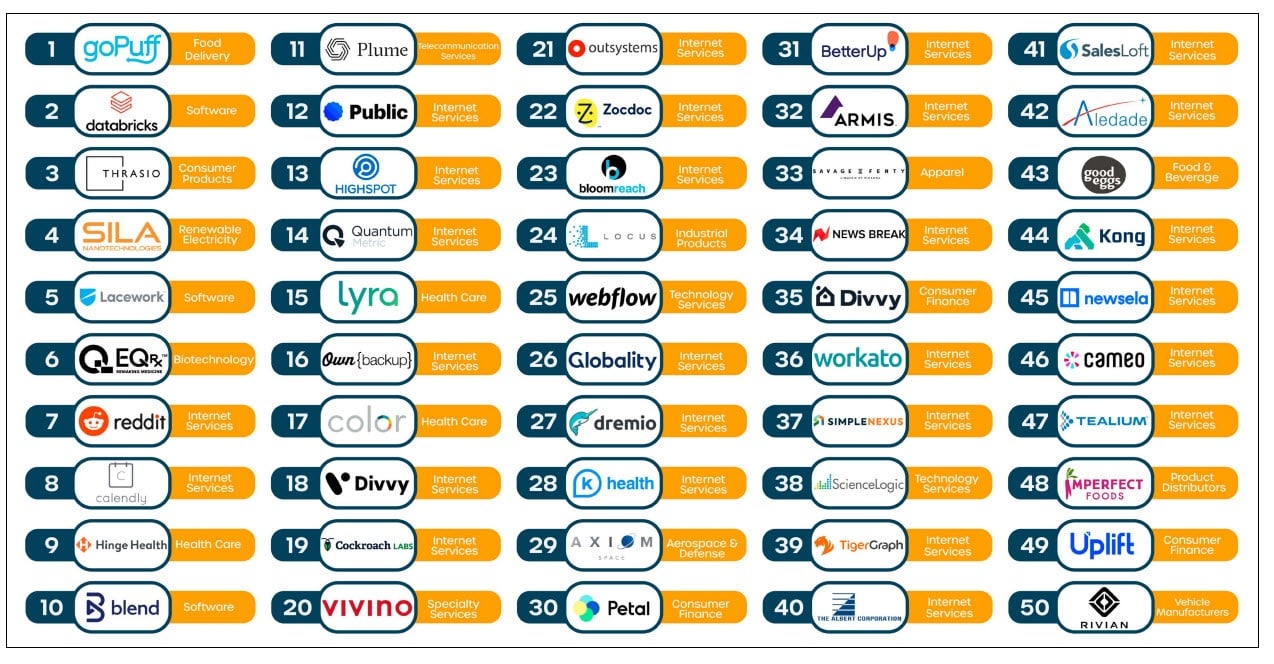 Although most companies that ranked on our 2020 list did not make it on the Q1 2021 list (with the exception of Cockroach Labs), we recognize that many made big moves nonetheless. For example, Hims graduated off the list in a SPAC merger with Oaktree Acquisition Corp., listing under the New York Stock Exchange, while Stripe became the most valuable private startup, knocking SpaceX from its perch after a $600 million funding. Many of the companies are also rumored to be going public in some form this year, including the aforementioned Stripe and the top-performing Instacart. We should also note that the top-ranking company of Q1, Databricks, did appear as one of the top 50 fast-growing companies for Q4 2020.

Meanwhile, 2021 has been a stellar year so far for startups. Aside from an overwhelming 2.5x jump in total funding for U.S. startups compared to the previous quarter, noteworthy events such as massive vaccination rollouts and new leaders in government have spurred a newfound optimism. While funding in 2020 seemed to focus heavily on healthcare and essential services such as food delivery and education, it seems that 2021 is promoting innovation again, starting with a push towards electric vehicles and financial tech. Nonetheless, funding in food delivery services and healthcare continues unabated; our habits have permanently shifted due to the pandemic.

Among the funding of the top 50 companies, Q1 was dominated by EV-related businesses at 32.4% (notably Rivian Automotive), followed by food delivery (notably top-performing Gopuff), data management, and fintech-related services.

This information was originally published by PrivCo.

Disclaimer: This report is intended for general guidance only. It is not intended to be a substitute for detailed research or the exercise of professional judgment. PrivCo shall not be responsible for any loss whatsoever sustained by any organization or person who relies on this information. The data used in this report may be derived from third-party sources and PrivCo does not independently verify, validate, or audit such data. The results from the use of such data are provided on an “as is” basis and PrivCo makes no representations or warranties, express or implied.

Mr. Basil Hamadeh is the Chief Executive Officer at PrivCo, which tracks private company financial information in a proprietary database that is available on the Open:FactSet platform. Prior, he was the founder of AdLarem Fund Management, a buy-to-rent single-family home fund, and spent the majority of his career at Credit Suisse, working in multiple capacities. Mr. Hamadeh earned a degree in Business Administration from the University of California, Riverside.