Last September 18, 2015, news that Volkswagen cheated on its diesel engine emission tests was released to the public, and the company’s stock price plunged more than 20% within two days. As one of the largest automobile manufacturers in the world, events impacting Volkswagen are rarely isolated in nature and could exert significant economic ripple effects on its suppliers.

So how do investors identify the relevant suppliers potentially impacted by this emission scandal given that Volkswagen has hundreds of disclosed suppliers? To address this question, we sought our answers via two sets of data involving supply chain and industry classification.

With these two pieces of information, we can use an industry classification system to significantly narrow down the number of potentially impacted suppliers from 269 disclosed suppliers to 25, with seven belonging to powertrain and 18 to safety and electronics.

First, this emissions event involved Volkswagen’s diesel engine, so suppliers providing powertrain and related components to Volkswagen are prime targets of interest. Second, to achieve emission standard compliance in testing, Volkswagen manipulated its internal automobile safety and electronics equipment, and suppliers involved in this area would also be prime targets. 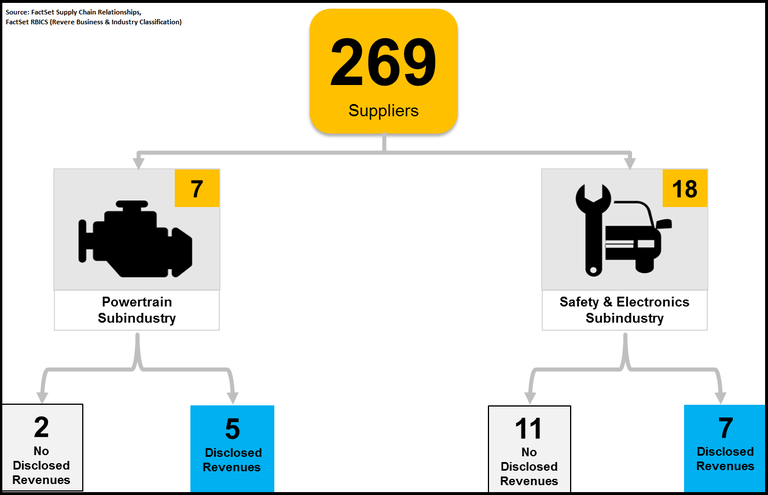 Within these 25 Volkswagen suppliers, there could be some who were more exposed to the Volkswagen scandal than others, and to assess this degree of exposure, we used inter-company revenue disclosure as a determinant factor. Simply put, we categorized these 25 suppliers into two buckets: one bucket for suppliers who disclosed their actual revenue dependency with Volkswagen and the other for those who did not.

As a result of the above supplier list filtering, there were now four groups of companies:

Our hypothesis was that companies with more material exposure to Volkswagen would experience more negative impact (as measured by their stock prices).

The returns analysis depicted above was done in early October 2015 last year, and now that six months has elapsed, we repeated the same experiment. The thesis continued to appear valid, in that the highly exposed Volkswagen suppliers (as approximated by revenue dependency disclosure) have underperformed the less exposed suppliers. 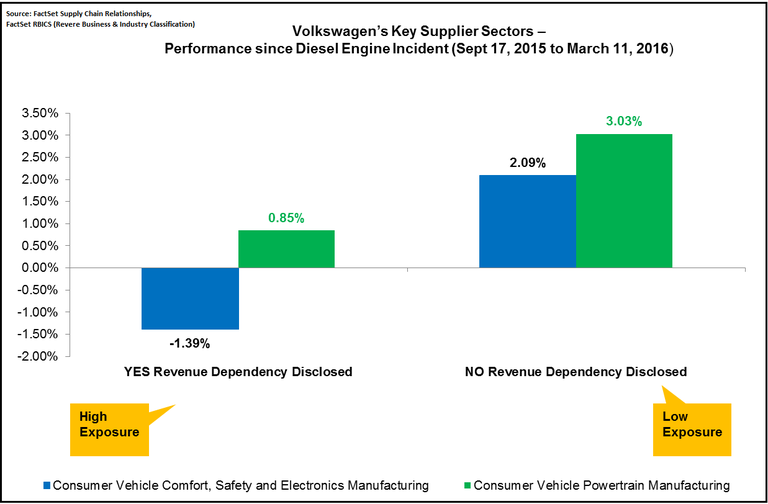 In conclusion, by using a combination of proprietary supply chain and granular industry classification datasets, investors could quickly assemble a list of relevant suppliers tied to a major corporate event and be able to mitigate risk or enhance portfolio returns by distinguishing their degree of event exposure. Mr. Jeremy Zhou is Vice President, Head of Indexing Solutions at FactSet. In this role, his main responsibilities include alternative data sourcing, index creation and partnership, and investment strategy consulting. Together with top tier index providers and fund sponsors, Mr. Zhou has led the creation of a suite of smart-beta/thematic indices that power exchange-traded funds, unit investment trusts, and passive funds with more than $7 Billion assets under management. Prior to joining FactSet in 2013, Jeremy was a senior executive with Revere Data—a leading alternative data firm acquired by FactSet—and held positions as Head of Index Solutions, Associate Director of Product Strategy, and Director of Healthcare Equity Research. From 2011 to 2013, Jeremy was also a Portfolio Manager for Covestor Ltd.—now part of the Interactive Brokers Group. Mr. Zhou earned a Master of Public Health and a B.S. in Nutrition &amp; Toxicology from the University of California, Berkeley. He is also a CFA charterholder and a member of the CFA Society San Francisco.