Earlier this summer, we examined some of the charts that describe the first half of 2018 for the U.S. economy. What data should we be looking at for the rest of 2018 and 2019?

The first preliminary estimate for second quarter GDP growth came in at 4.1%, the highest quarterly growth in nearly four years. Many analysts point to short-term factors as driving the growth spurt, including a pickup in trade activity in advance of the implementation of tariffs and increased consumption on the heels of the tax cut. Analysts surveyed by FactSet appear to agree that this robust growth will be short-lived. They are predicting growth to ease in the second half of the year, slowing to 2.9% in the third quarter and 2.6% in the fourth quarter; growth for all of 2018 is estimated to be 2.8%. Quarterly growth is expected to continue to slow into 2019, with estimates for quarterly growth to average just 2.2% in 2019, resulting in annual growth rate of 2.4%. 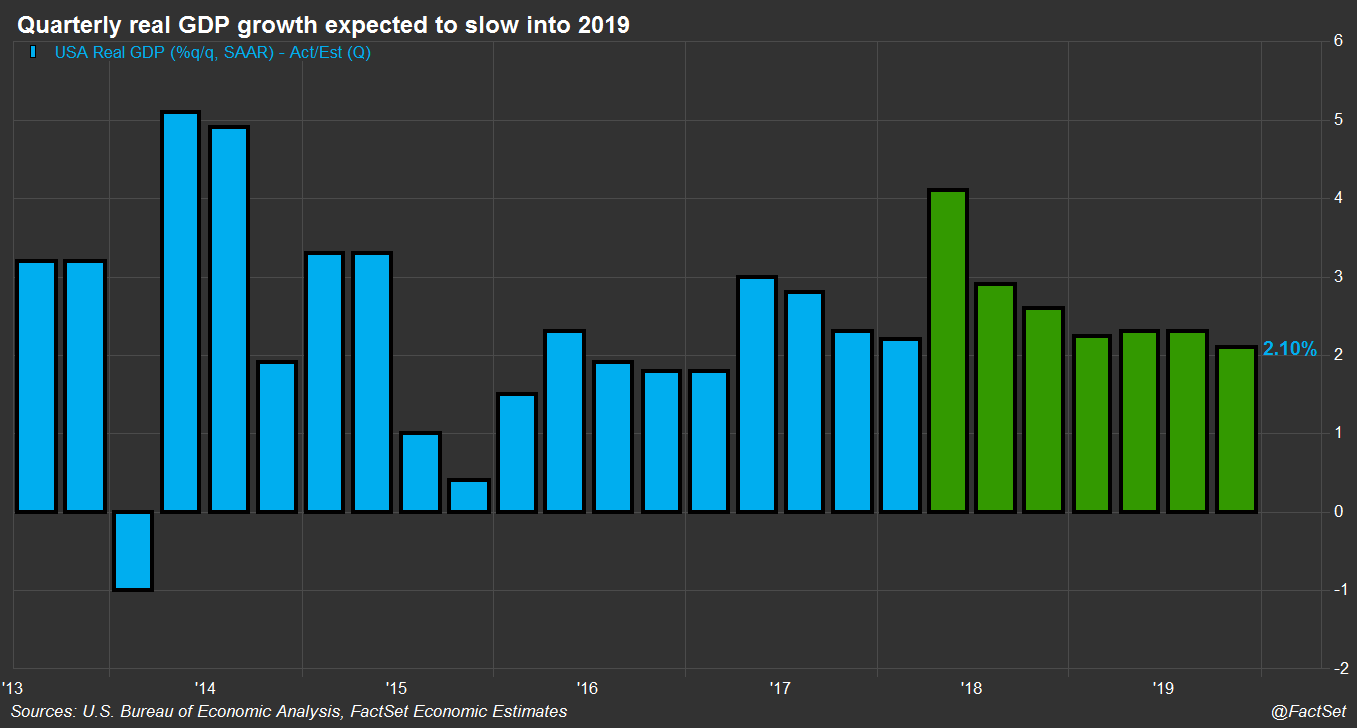 The Federal Open Market Committee (FOMC) has instituted two 25 bp increases in the Federal Funds rate so far in 2018, and it is expected to raise rates again at its September 26 meeting. Based on Fed Funds futures prices, the odds of a September hike currently stand at 96.0%; the odds are 65.3% for another rate hike at the FOMC’s December meeting. Analysts surveyed by FactSet are expecting a fourth hike this year—the median estimate for the end of 2018 is for a Fed Funds rate of 2.5%, with another two or more rate hikes anticipated in 2019.

Since bottoming out in the summer of 2016, the 10-year bond yield has surged, recently hovering just below the key psychological 3% level. This has pushed mortgage rates higher, with the 30-year average mortgage rate currently hovering around 4.5%, up 110 basis points over the last two years. With the Federal Reserve on a tightening path (two more rate hikes likely in 2018 and two more in 2019), mortgage rates should continue to move higher over the next two years. This will be a growing headwind for the housing market. 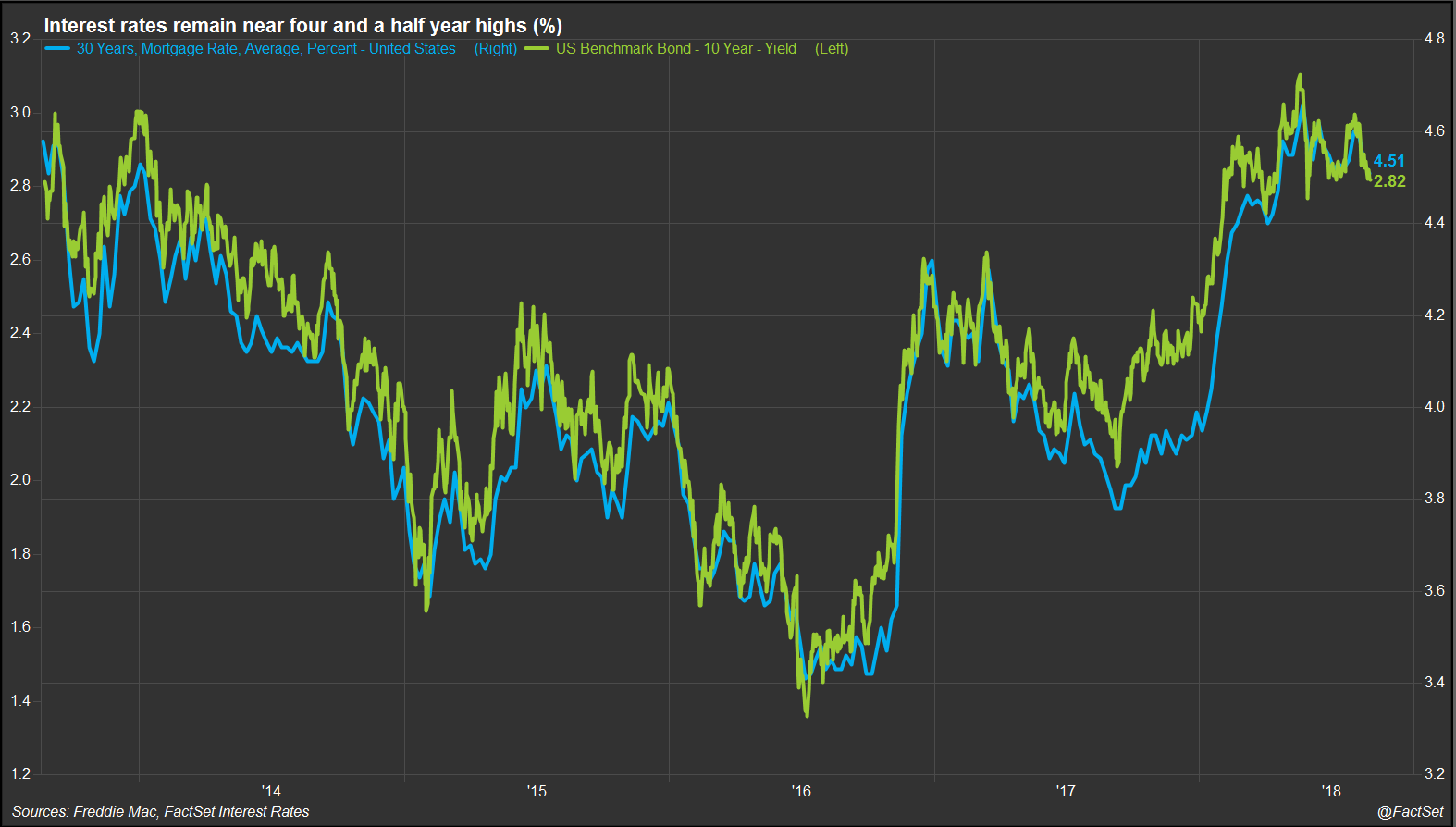 Where Will Oil Prices Go?

After spiking in late June, oil prices have retreated yet remain more than 40% higher than a year ago. WTI crude is currently trading at around $67/bbl, while Brent is in the $74/bbl range. Both futures prices and the consensus of estimates from analysts surveyed by FactSet predict a gradual easing in prices over the next several quarters, but there are several geopolitical and macroeconomic factors that could push oil prices higher in the near- to medium-term. On the supply side, the resumption of sanctions against Iran will remove supply from global markets, although the exact amount is still unclear. Venezuela’s economic problems have also decimated the OPEC country’s oil industry. On the demand side, the prospect of a trade war between the U.S. and China could lead to slower growth for the Chinese economy; a slowdown in the world’s second largest economy would certainly have a negative impact on global oil demand. On the other hand, a stronger U.S. dollar due to higher interest rates should point to lower oil prices, since commodities like oil are inversely correlated to the U.S. dollar. Future movements in oil prices will depend on whether supply/demand fundamentals or dollar movements prevail.

Wage Growth Not Keeping Up with Inflation

For most of the current economic expansion, inflation has remained subdued, with total annual CPI growth averaging just 1.7%. Now that we have entered the 10th year of this expansion, we are witnessing a steady uptick in inflation; in July, total CPI was up 2.9% year-over-year, the highest monthly increase in 6.5 years. Unfortunately for workers, wages have not seen the same uptick in growth, despite strong employment data and reported labor shortages. Average hourly earnings registered a 2.7% year-over-year increase in July, below the increase in the overall price level. According to the consensus of FactSet Economic Estimates, total CPI is projected to increase by 2.5% in 2018; workers will be paying attention to see if their wages will keep up.