On the heels of weak first quarter IPO activity due to the U.S. government shutdown, we saw a rebound in second quarter activity, led by a surge in mega-IPOs. Technology company debuts dominated in the second quarter. Following Lyft’s $2.3 billion IPO in March (the only mega-IPO of the quarter), the second quarter featured mega-IPOs from tech companies Uber (priced May 9, raised $8.1 billion), Pinterest (priced April 17, raised $1.6 billion), and Tradeweb Markets (priced April 3, raised $1.2 billion). In addition, Slack followed Spotify's 2018 example by listing its shares directly, eschewing the traditional IPO route via Wall Street underwriters in its highly anticipated IPO on June 2.

There were 75 IPOs in the second quarter, nearly double the number in Q1 2019 but 8.5% lower than Q2 2018. Led by the Uber IPO, the second quarter was the best quarter in nearly five years in terms of money raised. Gross proceeds totaled nearly $30 billion, the best quarterly performance since Q3 2014, when Alibaba debuted. The quarter featured five mega-IPOs, the most in four-and-a-half years: Uber, Avantor (priced May 16, raised $3.3 billion), Pinterest, Tradeweb Markets, and Chewy (priced June 13, raised $1 billion). With total proceeds of $15.3 billion, these five initial offerings accounted for more than half of the total money raised in the quarter. The average money raised for the quarter was $399 million but excluding Uber the average was just $295 million. 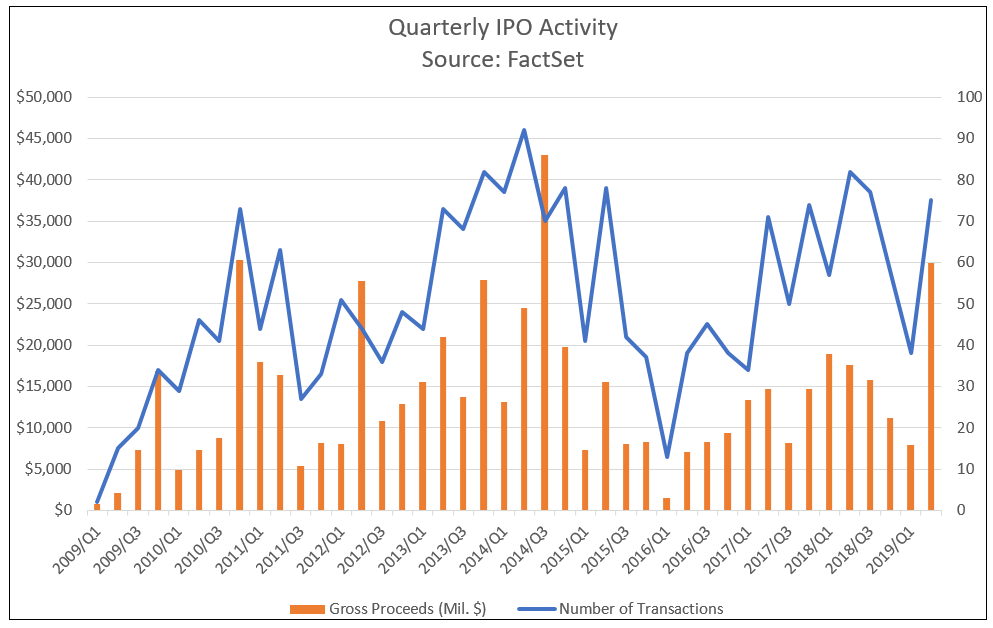 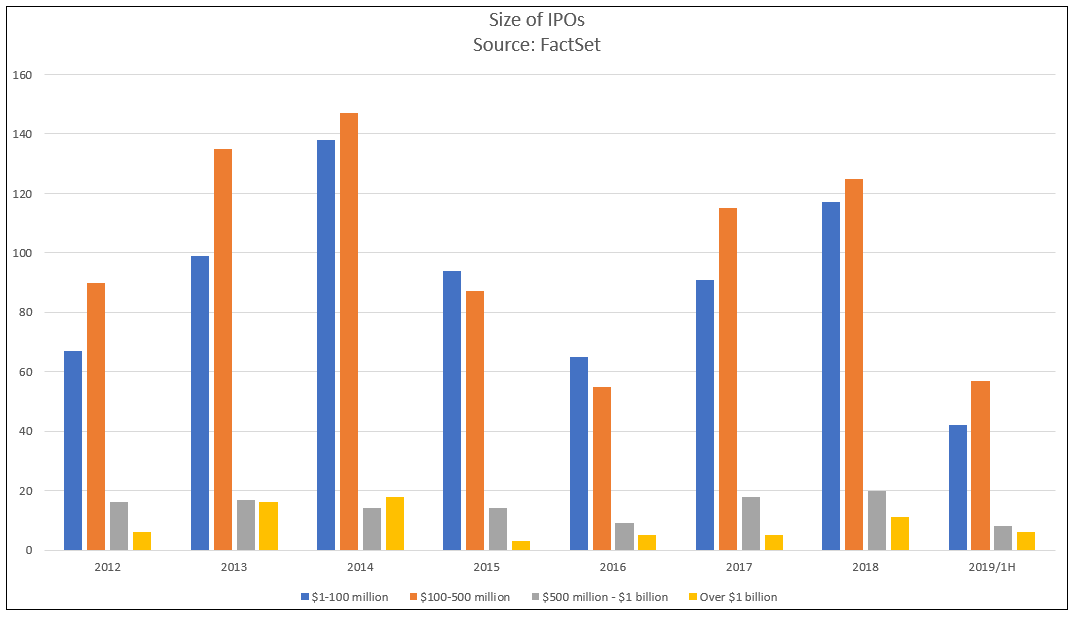 Of the 75 initial public offerings in the second quarter, 21 came from the Health Technology sector. However, second quarter IPOs in Health Technology were smaller than average, raising an average $111 million, with the sector only seeing total gross proceeds of $2.3 billion. The Finance sector saw 17 IPOs, raising a total of $3.4 billion. Fifteen IPOs in the Technology Services sector raised a total of $14.9 billion, with an average size of $996 million, driven by Uber, Pinterest, and Tradeweb Markets.

Activity by Financial Sponsors Surges After a Slow Q1

There were 35 venture-capital backed IPOs in the second quarter, the best quarterly number since Q2 2018 when we saw 39 VC-backed offerings. The list included three of the quarter’s mega-IPOs, Uber, Pinterest, and Chewy, together raising $10.8 billion. Gross proceeds for all 35 VC-backed offerings totaled $17.2 billion, the biggest quarterly number since Q2 2012 when Facebook debuted. In fact, 2019 is on track to easily surpass 2012's record $21.9 billion in total gross proceeds for VC-backed IPOs.

After seeing no private equity-backed IPOs in the first quarter, there were 12 in the second quarter, the most in two years. Two of the quarter’s mega-IPOs were PE-backed, Avantor and Tradeweb Markets, raising a combined $4.6 billion. All 12 PE-backed IPOs raised a total of $6.4 billion in Q2, the biggest quarterly total since Q3 2014, when Alibaba had its IPO on U.S. markets.

The next generation of tech stocks to watch includes the so-called LUPA (or PAUL) companies: Lyft, Uber, Pinterest, and Airbnb. While Lyft, Uber, and Pinterest have already IPOd this year, we’re still waiting on Airbnb, anticipated for late 2019 or possibly early 2020. Despite the enthusiasm surrounding these and other tech IPOs, performance has been mixed.

As shown below, the much-anticipated Lyft and Uber IPOs have not performed well since their debuts, with Lyft stock down 17.0% and Uber down 4.6%. At the same time, the other three big Technology Services IPOs in the first half of the year have done very well. Zoom stock has more than doubled in price (+152.1%), while Tradeweb Markets is up 73.5% and Pinterest is up 40.9%.

How Does IPO Activity Look in the Second Half of 2019?

Sixty companies have released initial preliminary filings this year and are still in registration (this excludes offerings that have been postponed or withdrawn). Nearly half (27) of them filed in June, indicating a strong pipeline for Q3. With U.S. markets currently flirting with all-time highs, things look promising for the second half of 2019. However, there are looming risks for global markets, including Brexit and continued trade tensions, which could lead to more market uncertainty.