Finally!, you can hear OPEC saying. After more than 18 months of holding on, the US "shale gale" seems to at last be slowing down. Credit ratings of US oil companies are falling like rig counts, and Iran hasn’t added the one million barrels per day analysts expected after sanctions were lifted in January. Plus, the Brent spot price has recently crawled back into positive territory for the year by closing at $40.39 on Friday, +8.3% YTD.

These shifts don’t account for slower growth in China, brimming inventory levels, and billion-dollar equity issuances that prove that US oil companies will continue to fight a price war. But let’s forget all of that for a minute and look at how the Eagle Ford shale play in South Texas has been battered. As of the end of February, the basin’s oil rig count was down by 168 in two years to settle at 41, while oil production stood at 1.3M barrels per day (bpd) – a 27% drop from its peak 11 months prior. 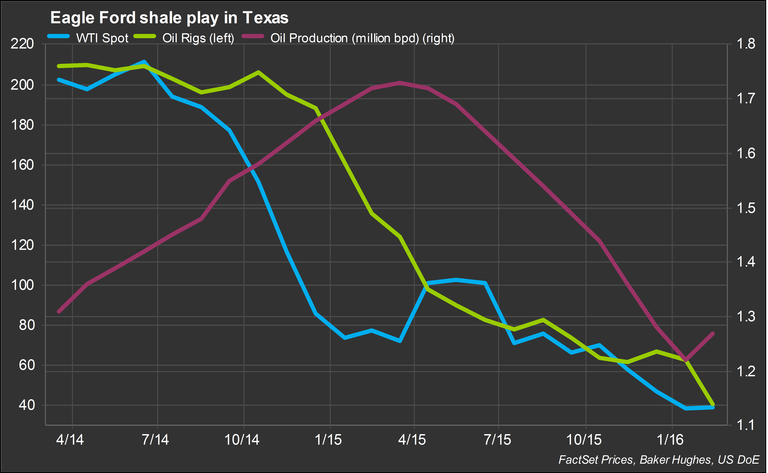 This should come as good news to Saudi Arabia, as the country has made clear that its aim is to regain market share. The Saudis’ main target is largely believed to be shale oil in the US, and OPEC might at last be (sort of) ready for a production freeze. But the question now is: will Saudi Arabia ever agree to reverse course and reduce production? In other words, will 2016 see an end to the price war?

To find answers, we can start by determining what exactly regaining market share entails. If the frackers really are the main target, then percentage of US oil consumption is the golden metric. (The analysis is simplified by the US oil export embargo that was lifted in December, which generally meant that the only market share Saudi and shale crude competed for was in the US.)

The chart below shows how US crude oil consumption (defined here as domestic production plus imports minus exports plus decreases in inventory levels, assuming no inventory withdrawals are exported) grew 21% in six years to 16.8M bpd. During that same time, domestic crude output shot up 69% to 9.2m bpd, while imports from Saudi Arabia increased 29% to 1.1M bpd. 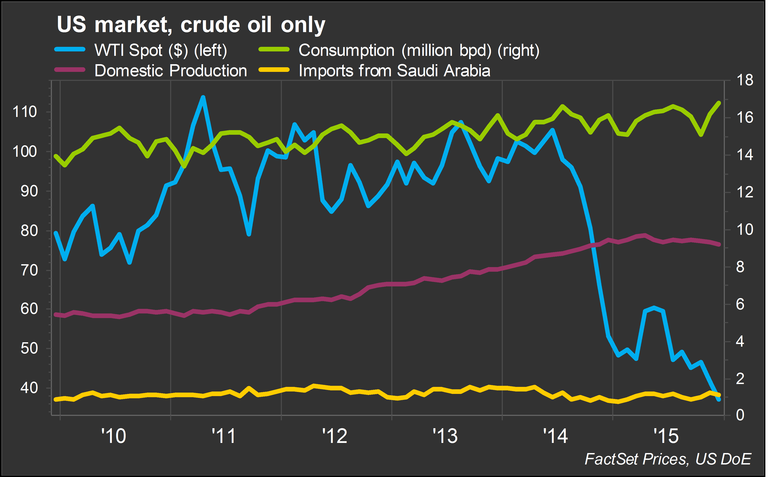 Old news, right? The shale revolution pushed America closer to “energy independence” by displacing barrels from foreign nations. The Saudis responded by tanking global oil prices to drive the frackers out of business in order to regain market share.

But if we convert the chart to display percent of market share instead, you might notice that the Saudi market share has always been less than what you may believe. From 2010 through 2015, the highest market penetration Saudi crude achieved in the US was only 11%.

Many media outlets directly relate the declining Saudi market share in H2 2014 to the steady increase in disruptive and patriotic domestic production. But a barrel of American shale oil (light sweet) cannot necessarily displace a barrel of Saudi oil (heavy sour) at Gulf Coast refineries without blending or expensive retrofitting.  So what else could have happened during that tipping point year just before oil prices plummeted worldwide? The table below shows how domestic oil’s market share increased by 400 bps between September 2013 through April 2014, while that of Saudi oil remained flat at 10%. In terms of market share for Saudi Arabia, 10% was well above its 6Y average of 7.8%.

But then the Kingdom’s portion almost halved when it sunk by 450 bps in just four months from a monthly average of 1.6 to 0.9m bpd in imports. This is the period when the Saudis must have determined they needed to unleash a complete price war to drive out shale. But American crude’s market share rose by only 20 bps during those four months.

So Who Was Displacing the Missing Saudi Barrels?

The increase in imports from Iraq, Canada, Ecuador, and Brazil combined accounted for 380 bps from May through August 2014. Perhaps shale crowded the field, but other foreign nations were the ones who pushed Saudi Arabia out of bounds. In fact, if you add Nigeria and Mexico to the list and look at yearly market share averages, Saudi Arabia’s portion was initially increasing in tandem with America’s (and Canada’s) to squeeze the others out.

Talk from the Saudis about maintaining market share (at 10% by our calculations) is not about maintaining at all – it’s about holding on to the market share that was taken from other nations in the first place. If we focus on the last five months of 2015, we can see domestic oil finally peaking in October. But domestic oil’s decline didn’t mean Saudi Arabia’s moved the other way by an equal amount.

Iraq could have piggybacked off the Saudi price war for a year and a half and reaped the rewards (up 190 bps in the past four months) at a fraction of the economic cost the Kingdom has suffered. Even more surprising, Canada – whose oil sands have crashed harder than the shale plays – has steadily increased its market share to stand at three times that of Saudi oil, up from two times in 2010.

What Does This Tell Us?

So will Saudi Arabia ever agree to reverse course and reduce production? If the price war is about market share, then no, as the battles are still being waged. But, whatever the course, the Saudi reign over the oil trade looks to be fading by the day.