The product information and content statistics contained in this document are as of July 2019.

The FactSet Corporate Governance DataFeed is divided into four distinct packages that provide comprehensive insights into thousands of companies. The coverage of each package differs slightly given the nature of the content included. Coverage of the corporate governance-focused packages, Poison Pill Basic, Poison Pill Advanced and Corporate Governance, coincide with corporate governance provisions reported in public sources, such as EDGAR filings and articles of incorporation, while the coverage of the Corporate Activism package coincides with activist activity reported in SEC filings. U.S. companies constitute the majority of those included in this feed, although FactSet continues to expand coverage in other regions.

The charts below provide a high-level illustration of the campaigns, companies and poison pills included in each package. The Corporate Activism package captures any significant activism reported in SEC filings and news sources. 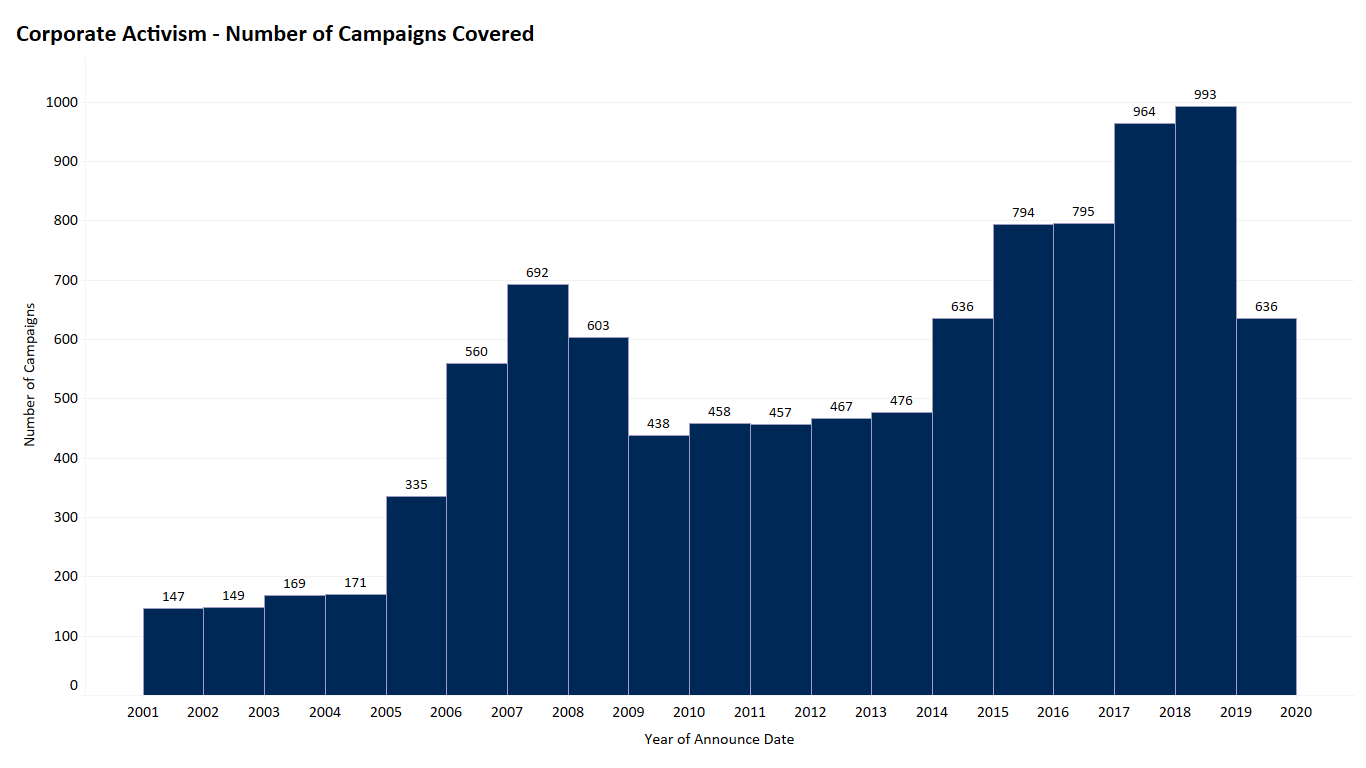 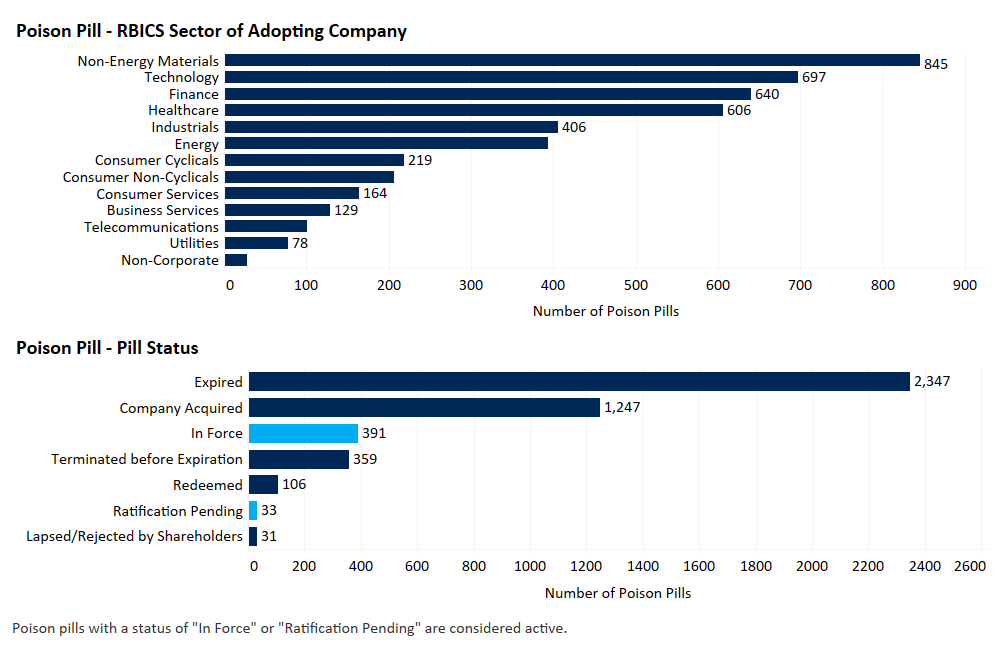 The granularity and coverage of the corporate governance data allows users to make accurate and timely assessments of a company’s takeover defenses and shareholder rights. The Corporate Governance and Poison Pill packages include over 250 and 50 data items respectively, updated within one day of a SEC filing. Users can uncover amendments to companies’ policies on topics such as classified boards, majority voting in director elections, and poison pill redemption, and compare these policies across industry peer groups.

A key differentiator of the Corporate Activism package is its extensive coverage and history. This package captures all campaigns waged against U.S. companies since 2006, with additional campaigns and history included for campaigns waged by prominent activists. All proxy fights against U.S. companies since 2001 are also included, with additional countries covered starting in 2017 as FactSet continually expands coverage.

Meaningful activism trends are revealed through using the proprietary SharkWatch 50 list to track the 50 most prominent and impactful activist investors, chosen by Corporate Activism specialists at FactSet. Examining the typical objectives, tactics and outcomes of campaigns waged by the SharkWatch 50 can provide insight into upcoming campaigns and stock sentiment.

FactSet Corporate Governance is used by a variety of firms, including investment banks, law firms, institutional investors, hedge funds, proxy solicitors, corporations and corporate communications firms, to monitor activism activity, shareholder rights and takeover defense tactics. One such application of this data is to analyze common characteristics of activism targets and identify corporate governance provisions that are vulnerable to shareholder scrutiny.

On August 1, 2019, Carl C. Icahn, Chairman of Icahn Associates, disclosed a 12.6% stake in Cloudera, Inc. and announced an activist campaign against the company seeking board representation. In this example, we will look at Icahn Associates Holdings LLC ’s past targets, tactics and objectives to assess whether the campaign against Cloudera, Inc. mirrors other campaigns waged by Icahn.

The SharkWatch 50 list, which includes Icahn, helps us flag this change in ownership and consider the threat posed by Icahn given its successful campaign track record. Icahn has engaged in 150 activist campaigns in its history and 75 since the start of 2009.  Of these 75 campaigns, 39 campaigns focused on gaining board representation. Icahn won board seats in 85% of those campaigns, totaling over 80 board seats won. 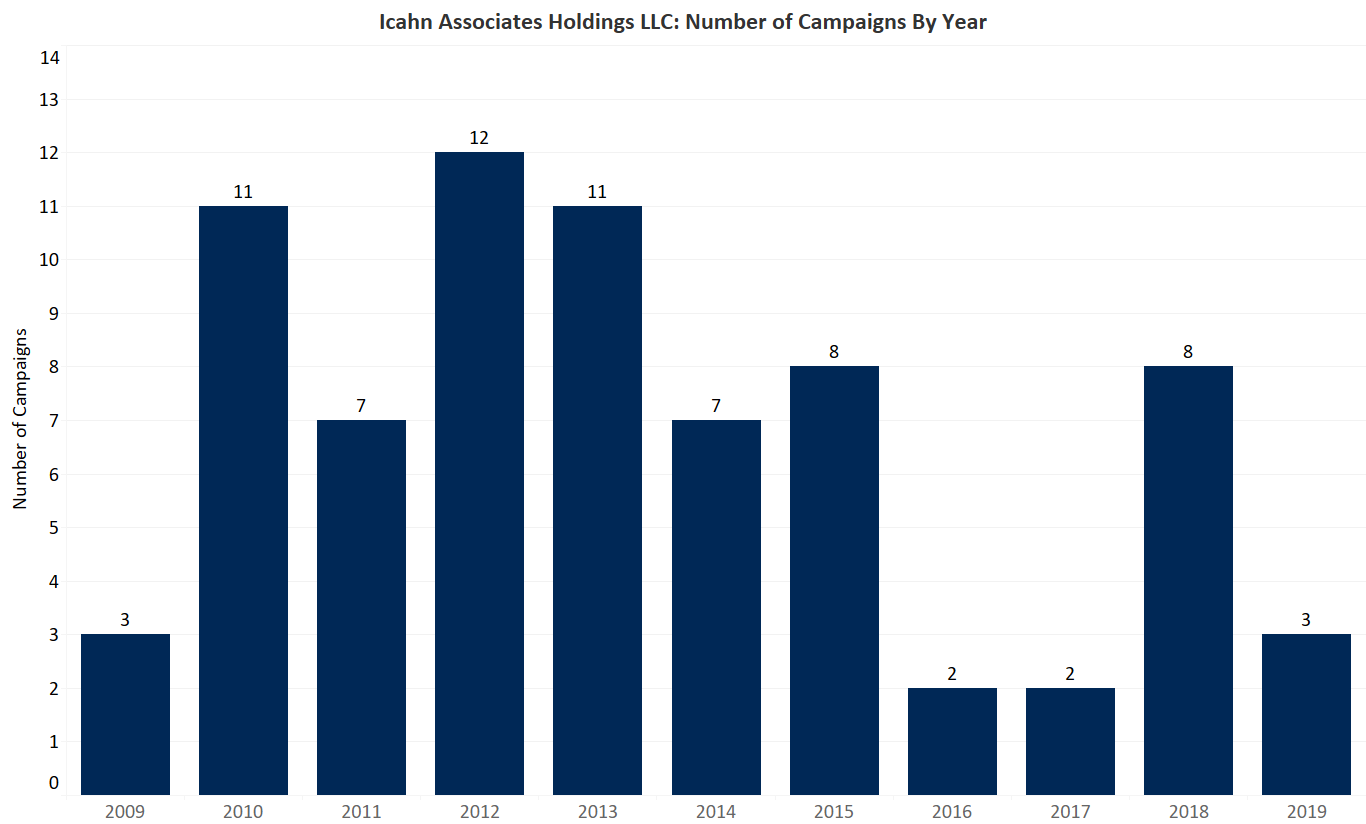 Using the comprehensive campaign details included in the Corporate Activism package, we can take a closer look at the common objectives and characteristics of these campaigns. The chart below narrows in on campaigns in which activism was publicly disclosed since the start 2009, excluding one exempt solicitation campaign. For each campaign type, in this case proxy fights and other stockholder campaigns, the pie charts display the primary campaign objectives. Here we can we see that board representation dominates as Icahn’s most common objective. Of campaigns seeking board representation, Icahn won board seats in 58% of proxy fights and 90% of other stockholder campaigns. 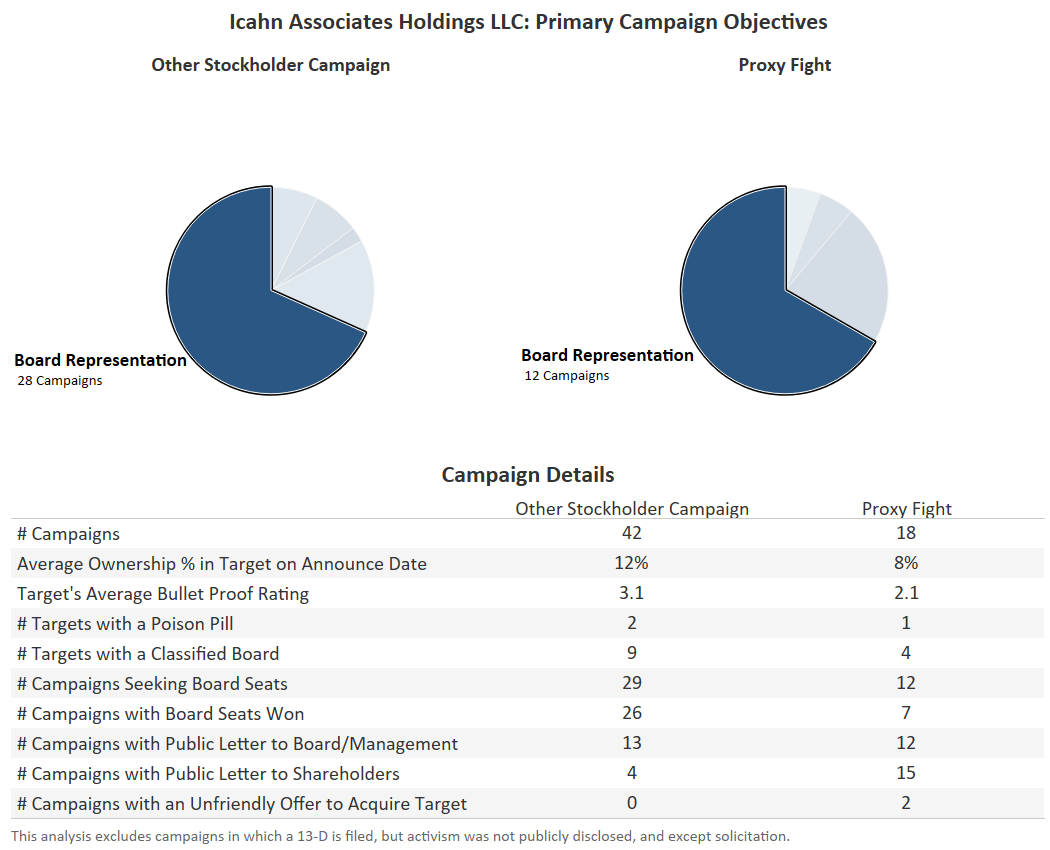 Using a handful of the 250 governance provisions included in the Corporate Governance package, we can compare characteristics of Icahn’s previous targets to Cloudera. Even this small subset of criteria informs us that Cloudera has a classified board, unlike most of Icahn’s targets, and a higher Bullet Proof Rating than other targets. The data in this package also highlights that Cloudera’s supermajority vote requirement to remove a director differs from most companies in its industry group.

Given Icahn’s past campaign objectives, it is not surprising that board representation was the primary objective in its campaign against Cloudera, Inc. Although Cloudera differs in some ways from past targets, commonalities between them may reveal characteristics that are prioritized when Icahn selects a target. Leveraging the full list of campaign details and governance provisions in the DataFeed can be used to analyze these commonalities and provide insight into companies that are vulnerable to future activism campaigns.

The FactSet Corporate Governance DataFeed provides the transparency into granular aspects of corporate governance and activism, along with the scope and history, to empower deep analysis of takeover defense tactics and activism trends by users across investor types.