At a Glance: FactSet Mergers DataFeed

The FactSet Mergers DataFeed provides details for over 600,000 announced mergers, divestitures, and spinoffs involving both public and private companies.

The product information and content statistics contained in this document are as of September, 2019.

FactSet Mergers covers all deals where the buyer and seller are disclosed and the transaction involves the sale of at least 5% stake in a business, with some exceptions for impactful or high value deals. The DataFeed includes global deal history from 2003, with U.S. and U.S. cross border history from 1992 and European major markets history from 2000. 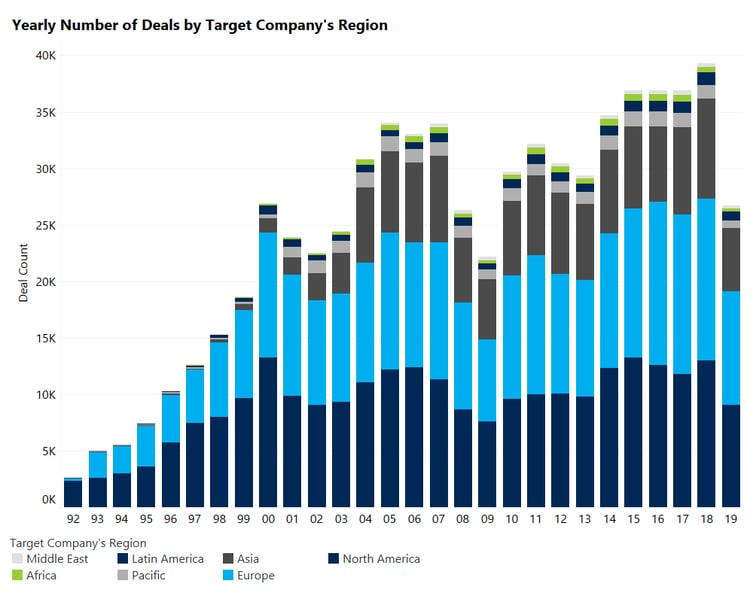 The chart below illustrates how the total transaction value of all deals and the average value per deal fluctuated by year. 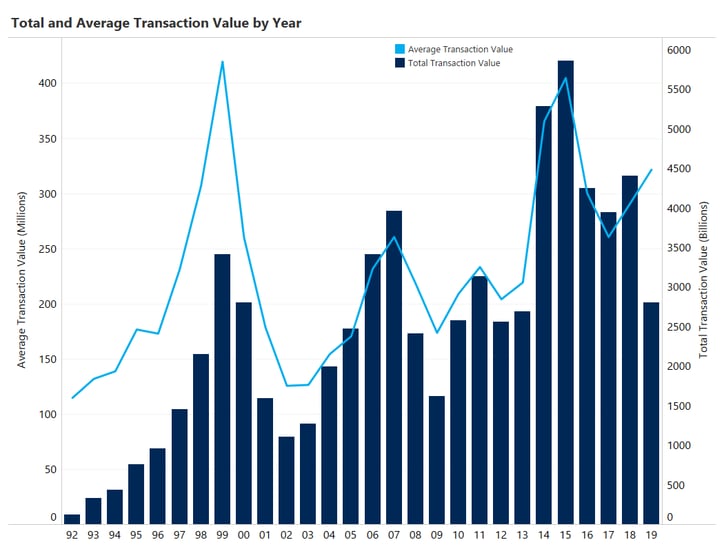 A key differentiator of the FactSet Mergers DataFeed is its timeliness and accuracy. Public deals are added to the database on the day they are announced, and non-public deals are entered as quickly as possible, typically on the day they are announced. The collection process also adds new deal information to the database daily as it is disclosed, amounting to 300 – 450 deals updated per day.

Additionally, a rigorous quality assurance process is employed to ensure accurate information is stored for all deals. This includes over 244 logic and quality checks, individual deal review by a dedicated team of analysts, and a guarantee that a validated source document is tied to each deal.

Beyond timeliness and accuracy, the FactSet Mergers DataFeed offers complete information for key deal details. The database uses a structured and consistent methodology to collect information on M&A deals that involve the sale of at least 5% stake in a business, ensuring the universe of transactions covered supports the analysis of relevant M&A transactions.

FactSet Mergers’ thorough coverage of M&A transactions enables customized analysis of M&A trends, top advisors and individual deals. The sample use case below illustrates how FactSet Mergers can be used to uncover the growing number of billion-dollar deals amidst an overall contraction of the US M&A market.

This example focuses on completed and pending M&A transactions announced since 2010 in which the buyer is a public US company. Please note that the statistics quoted for 2019 reflect forecasts calculated using M&A activity through August, 2019. The graphs below illustrate that while the total number of M&A deals per year after 2015 remained lower than the levels seen in 2014 and 2015, the number of deals valued over $1 billion grew between 2016 and 2018. On top of this, the total value of the mega-deals announced in 2019 has nearly met the total value in 2018, with under 3 quarters of 2019 completed. 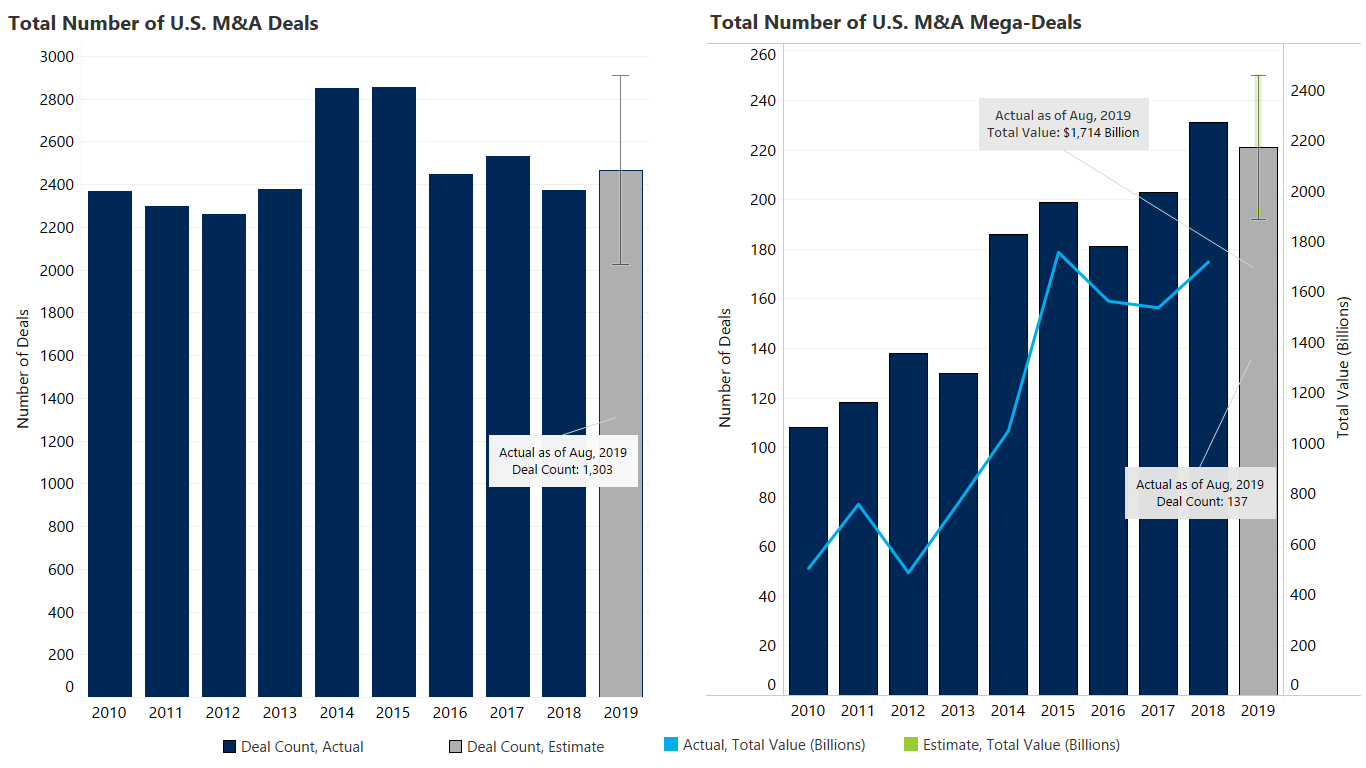 From here we can start to identify commonalities between these deals, including the top firms by number of deals that have advised either the buyer, target or seller. The league tables below reveal that the top five financial and legal advisors have cumulatively advised on 951 and 772 of the 1,082 mega-deals announced since the start of 2010. Although six advisors on average may work on a single deal, this illustrates that the top advisors impact a significant portion of these market moving transactions.

The table below isolates the five largest deals since the start of 2018. By connecting the buyer and target to their respective sector classifications in the RBICS Focus DataFeed, we can determine the primary source of revenue for each company. In this case, three of the five deals involved a target in Health Care sector with a different revenue focus from the acquiring company. In practice, a user could take this a step further by incorporating RBICS with Revenue to uncover how the target company changed the revenue exposure of the acquirer.

Let’s take a closer look at the Cigna Holding Co. / Express Scripts deal details included in the FactSet Mergers DataFeed, which capture method of payment, source of funds, valuation items, and price changes. A handful of these data items are included in the table below. 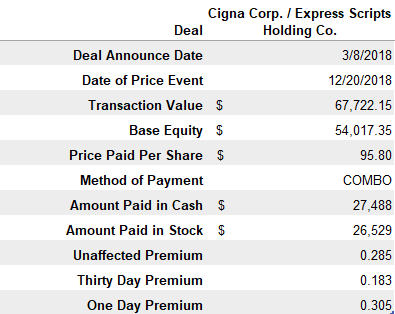 We can add another layer to our deal analysis by linking the deal participants to their respective institutional holders. A study by Goranova, Dharwadkar and Brandes in 2010 found that acquiring firms see less value from M&A transactions as more of their holders also hold shares of the target firm.  Using FactSet Ownership, we can calculate the percent of the acquiring company’s shares outstanding that were held by investors with holdings in the target company. In the table below, we can see that over 76% of Cigna’s float was held by investors with holdings in Express Scripts at the time of the deal’s announcement. Additionally, each of Cigna’s top 10 holders, which collectively held 39% of Cigna’s shares outstanding, also held shares of Express Scripts, amounting to 24% of its shares outstanding. This overlap suggests that a significant portion of shareholders were incentivized to focus on the aggregate value of the deal, rather than delivering value to the acquirer’s shareholders alone.

While this example starts from a market trend and drills down into individual deal analysis, FactSet Mergers is also commonly used to identify similar and precedent deals by starting with a particular transaction. The power of the FactSet Mergers DataFeed is amplified by incorporating FactSet Ownership, FactSet Supply Chain, FactSet Corporate Governance, and more to capture the full impact of M&A transactions.