The 50 largest hedge funds significantly increased their equity exposure (+9.8%) in Q2 2014 in the wake of M&A activity in the Health Care sector. Four of the top ten equity additions were health care stocks involved in significant merger discussions—Allergan, Actavis, Covidien, and Questcor Pharmaceuticals.

Allergan, which was in the midst of acquisition negotiations with Valeant Pharmaceuticals International during the second quarter, was the funds’ top purchase by far. The market value purchased in the global health care company amounted to nearly three times that of the next most popular purchase ($7.4 billion versus $2.8 billion for Apple), and the stock’s exposure in the portfolio of the fifty largest hedge funds grew nearly 600%. The largest contributor to this trend was Pershing Square Capital Management, which took a 10% stake that amounted to nearly two-thirds the aggregate hedge fund portfolio’s increased exposure in the stock. Other funds that made significant purchases in the biopharmaceutical company included Paulson & Co., Mason Capital Management, and OZ Management.

The next largest purchase was Apple. The funds’ managed to show impressive quarter-over-quarter growth in the stock (+27%) despite a high ownership baseline (Apple was the second largest holding in the aggregate portfolio at the end of Q1). By the end of Q2, Apple was the largest holding in the aggregate portfolio, and its exposure comprised 1.6% of all equity holdings. However, Apple has been a stock that has shown a lot of turnover in the portfolio, and more funds listed Apple as their largest quarterly equity sale (4) than those that listed it as their biggest purchase in Q2 (3).

Actavis received the third largest increase in exposure at $2.2 billion, which represented 23% growth from Q1. The integrated pharmaceutical company was also affected by its widespread popularity, and consequently surpassed Apple to become the most widely held of any stock in the portfolio (29 funds hold Actavis compared to 28 for Apple). In addition, Actavis is the largest holding of four funds, which matches the number of funds that are anchored by Apple. Shortly after the end of the second quarter, Actavis closed the acquisition of Forest Laboratories.

On the other end of the spectrum, individual funds sold large interests in International Paper, Micron Technology, and several large financial institutions and media companies in Q2. International Paper received outflows from many funds in the wake of continued underperformance over the past year. Micron Technology, on the other hand, was the second largest sale of all equities despite outperforming the S&P 500 by significant margins. Top shareholders Greenlight Capital and Discovery Capital Management have been paring exposure to the semiconductor company over the last six months.

In addition, systematically important financial institutions (as designated by the Financial Stability Board) on the list of the top fifty equity holdings were pared in Q2. The exposure of JPMorgan Chase, Citigroup, and AIG in the aggregate hedge fund portfolio fell 15%, 5%, and 8%, respectively.

Another interesting trend in Q2 was the funds’ bets towards cable providers and away from media content companies. The funds added exposure to Comcast (+12%), Time Warner Cable (+10%), and Charter Communications (+10%), but Twenty-First Century Fox, Walt Disney Company, and Time Warner Inc. were among the funds’ three largest sales. Shortly after the end of the second quarter, Twenty-First Century Fox announced an unsuccessful bid to acquire Time Warner Inc. (the offer was cancelled on August 5th). Meanwhile, Netflix showed a 9% increase in exposure in the fund portfolio. 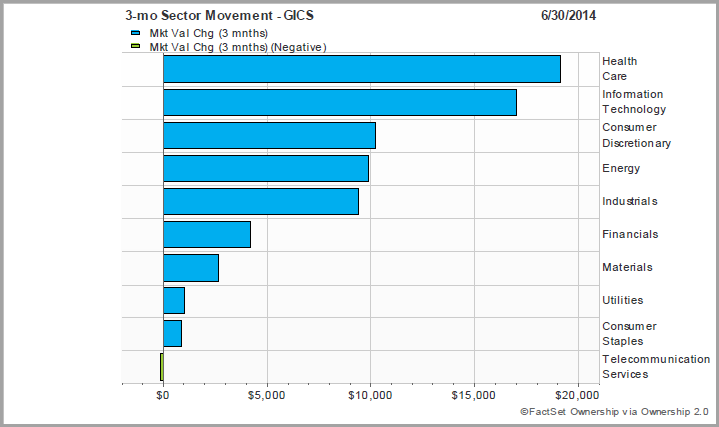