The number of companies going public on United States exchanges amounted to 33 in the fourth quarter, which represented a 6.5% uptick from the year-ago quarter (31 IPOs). Despite the increase, this number was still well below the average fourth quarter IPO count going back to 2000 (47 IPOs). The Q4 amount represented a decrease from the 35 companies that went public during Q3. On an annual basis, there were 106 companies that went public on U.S. exchanges in 2016, which was a 35.4% downtick from 2015 (164 IPOs). The number of initial public offerings in 2016 marked the lowest annual count since 2009, when the number was 64. 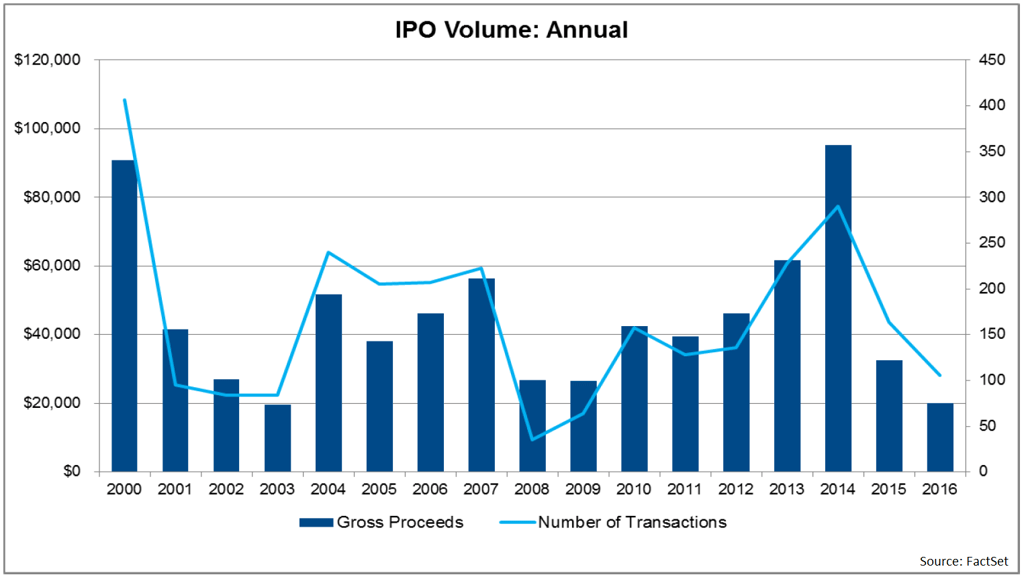 Gross proceeds (including over-allotment) from initial public offerings decreased 7.3% year-over-year in Q4 to $7.1 billion. This value was 44% below the average fourth quarter gross proceed total going back to 2000 ($12.7 billion). On an annual basis, gross proceeds from IPOs during 2016 amounted to $20.2 billion, which was a 38.1% decline from 2015. It marked the smallest annual total since 2002, when gross proceeds were $19.5 billion.

Only 13 Venture Capital-Backed Tech IPOs in 2016

Venture capital-backed technology initial public offerings have always been a closely watched section of the IPO market. It hit its peak back in 2000, when 93 of these IPO types occurred. During 2016, there were only 13 VC-backed initial public offerings in the Technology Services and Electronic Technology sectors. This marked the lowest annual count since 2009, when there were just four. Despite the low number, these types of offerings have performed well this year and could provide some momentum for the market moving forward.

Ten of the 13 VC-backed tech IPOs this year were in the positive through December 23. The only companies that have declined in value over this time period were SecureWorks, China Online Education Group, and Everspin Technologies. The average price performance of these 13 offerings from the offer price through December 23 was 57.4%, with three of the companies gaining over 100%. Optical networking technology company, Acacia Communications, and radio-frequency identification software firm, Impinj, led performance for the year, with price returns of 185.6% and 176.1%, respectively. These two stocks were also the top performers among all companies going public on U.S. exchanges this year. 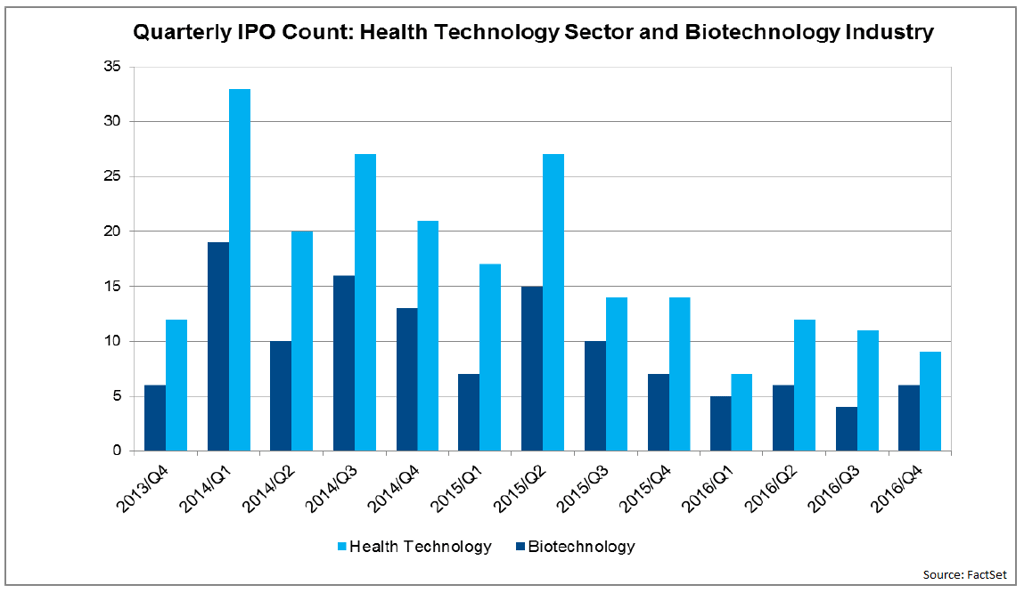 During 2016, 21 out of the 39 offerings came from the Biotechnology industry and 13 were from the Major Pharmaceuticals industry. The Finance and Technology Services sectors placed second and third in terms of annual IPO volume (15 and 12 IPOs, respectively).