Aggregate dividend payments made up 43% of total shareholder distributions in Q4. Quarterly dividends for the S&P 500 amounted to $104 billion, which was a 3.6% increase year-over-year and a 0.6% increase quarter-over-quarter. The dividend total in Q4 2015 represented the second largest quarterly dividend amount in at least 10 years. The total dividend payout for the trailing 12 months ending in Q4 was $415.4 billion, which marked the largest TTM payout in at least 10 years. To put this into perspective, the average TMM dividend payout in the past 10 years has been $281.6 billion. Therefore, the Q4 aggregate dividend amount was nearly 50% more than the 10-year average.

The fourth quarter also marked the eighth consecutive quarter that the TTM dividend payout for the index hit a new high. The number of dividend payers in the S&P 500 at the end of Q4 was 425 companies. This was a slight increase from the 424 companies paying dividends in the trailing 12 months one quarter ago. 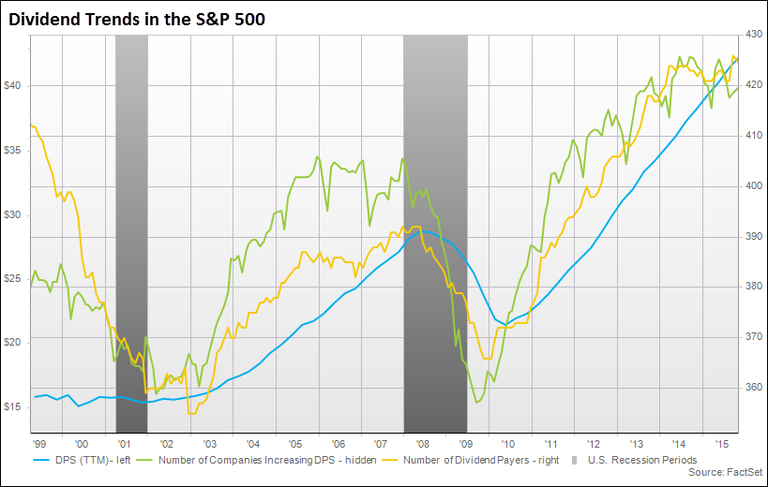 At the sector level, the Financials and Information Technology sectors once again led all groups in term of aggregate dividend payouts (similar to Q3). The Financials sector ended Q4 with dividend payments totaling $18.1 billion on a quarterly basis and $72.3 billion on a trailing 12-month basis. The Information Technology sector paid out $16.6 billion in quarterly dividends and $59 billion in TTM dividends.

The Consumer Staples sector has also consistently been one of the top groups in terms of aggregate dividends paid. In the TTM ending in Q4, companies in the Consumer Staples sector paid out $55.3 billion worth of dividends, which made up about 13% of the total for the S&P 500. Several of the largest payers in the sector were Procter & Gamble, Wal-Mart, Philip Morris, and Coca-Cola. Each of these companies fell in the top 15 list of S&P 500 companies by TTM dividends paid.

The Healthcare sector led all groups in YoY DPS, posting a 14.5% increase. The Financials sector came in second with a 14.4% growth rate. Within both of these groups, there were several companies that raised their quarterly dividends in Q4 relative to Q3. Agilent Technologies, Zoetis, and AbbVie, which are part of the Pharmaceuticals Biotech & Life Sciences GICS industry group, each increased their quarterly dividends compared to Q3. Assurant, Lincoln National, and Prudential Financial, which are part of the Insurance GICs industry group, also raised their dividends quarter-over-quarter.

The Energy sector was another standout group in terms of TTM dividends per share growth. In Q4, year-over-year growth for the sector slowed to only 2.4%, which was a significant drop from the 11.6% growth logged in Q3. Several of the major contributors were Diamond Offshore Drilling, Ensco plc, and Chesapeake Energy, which each saw their trailing 12 months dividends per share decline over 75% compared to a year ago.

With Earnings on the Decline, Analysts Expect DPS Growth to Decelerate to 5.5% over NTM

A major reason for this sentiment can be attributed to the continued decline in aggregate earnings for S&P 500 companies. The blended year-over-year earnings decline for the index was -3.5% in Q4 2015. The fourth quarter marked the first time that the S&P 500 has seen three consecutive quarters of YoY earnings declines since Q1 2009 through Q3 2009. Analysts do not expect earnings growth to return until Q3 2016. Additional analysis on earnings trends can be found in our weekly Earnings Insight.

Looking at DPS at the sector level, nine of the 10 GICS sectors are forecasted to see slower growth over the next 12 months relative to the TTM period ending in January 2016. The only sector expected to experience an accelerated growth rate in dividends per share is the Material sector (+2.3%).

In terms of absolute growth in dividends per share over the next 12 months, the Financials and Healthcare sectors lead all groups with growth rates of 13.3% and 8.4%, respectively. On the other end of the spectrum, the Energy sector is the only group estimated to experience an actual decline in dividends per share in the next 12 months versus just a reduced growth rate. Analysts forecast that the sector will see an 8.9% drop in DPS in the NTM compared to the 2.7% growth it saw in the TTM. Once again, lower oil prices can be seen as one of the culprits driving this decline as oil prices fell 27.8% in Q4 (October 31, 2015-January 31, 2016). 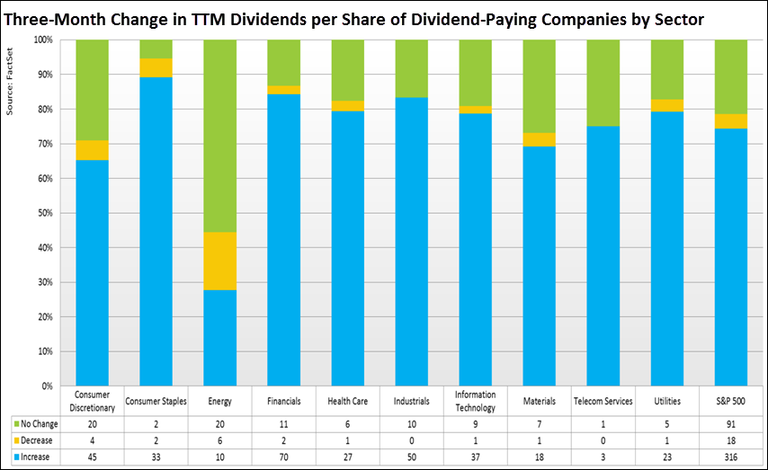 Similar to Q3, the Energy sector led all groups in terms of dividend decreases in Q4. Within the sector, six companies paid out TTM dividends per share that were lower than the amount paid out a quarter ago. Two of the contributors were Marathon Oil Corp and Kinder Morgan. Marathon Oil announced a reduction of its quarterly dividend from $0.21 to $0.05 back in late October.

Lee M. Tillman, the firm’s President and CEO, commented on the dividend cut by saying, “We believe the revised dividend appropriately addresses the uncertainty of a lower for longer commodity price environment. The decision aligns with our priority of maintaining a strong balance sheet through the cycle and provides us additional capital flexibility to support growth from our deep inventory of investment opportunities in the U.S. resource plays when commodity prices improve.” 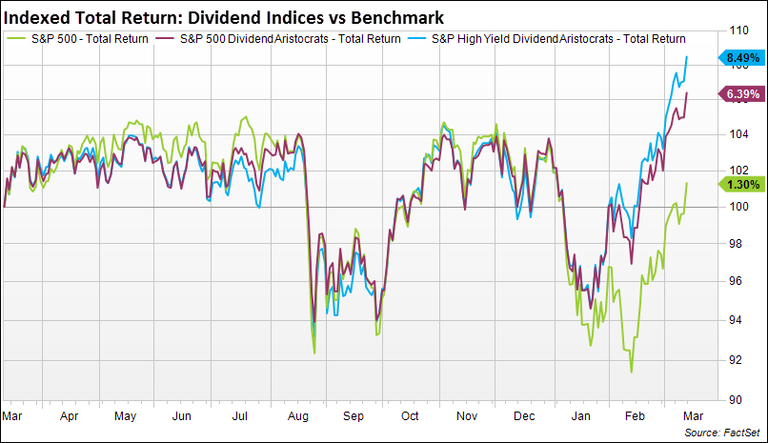 Using this methodology, dividend payers underperformed the S&P 500 Total Return index and non-dividend payers outperformed the index. Several of the major constituents driving this trend are Alphabet, Facebook, and Amazon. These non-dividend payers are three of the largest weighted stocks in the index due to their high market cap and are also some of the top performers over the past year. Additionally, Apple, which does pay a dividend, has the largest market cap of any S&P 500 company and is down 18% in the past year.

Even with shareholder buybacks and dividend distributions for companies in the S&P 500 hovering near record levels, activist investors have continued to push for more. In 2015, there were 70 activist campaigns in which a dissident objective was to return cash via dividends and/or buybacks. This was a 37% increase from the number in 2014 (51 campaigns) and represented the highest total since FactSet began tracking the data in 2005. 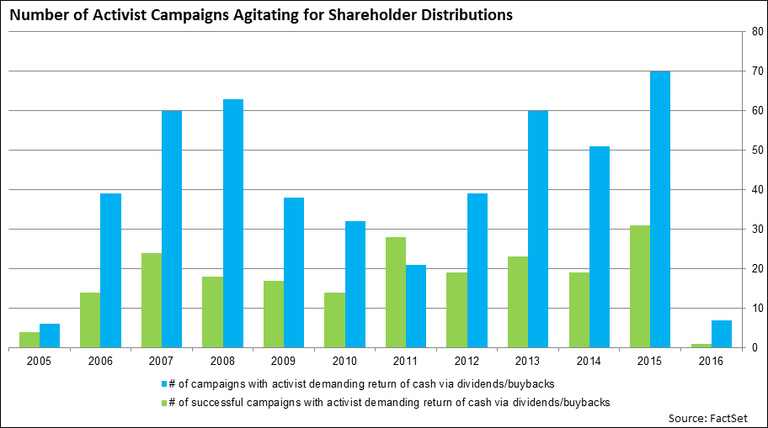 Of these 70 activist campaigns in 2015, the activists were successful in 31 campaigns, which was another record high. Examples of success include: the company declaring a special one-time dividend, increasing its regular dividend, announcing a new share repurchase program, and expanding its existing share repurchase program. So far in 2016, there have been seven total campaigns in which a dissident objective was to return cash via dividends and/or buybacks. One of these campaigns has been successful.

Five of the 11 sectors in the S&P 500 are now projected to report a year-over-year decrease in earnings for the second quarter,...

Are S&P 500 Companies Quantifying the Financial Impact of Coronavirus in Guidance?

Many S&P 500 companies may not provide any further updates on the impact of the coronavirus in guidance until they report actual...