The Italian economy has stagnated over the last two years. Since the end of 2017, GDP growth has barely budged (0.2% increase) while industrial production has contracted by 5.2%. According to analysts surveyed by FactSet, government debt is projected to jump to 136% of GDP for 2019 and to continue rising. However, while the FTSE MIB—the benchmark stock market index for the Borsa Italiana—saw a negative total return of -13.22% in 2018, the index rebounded in 2019 with a total return of 33.8%. Is the riskiness of investing in Italy being adequately reflected in market returns?

This brings us to a discussion about the equity risk premium (ERP). The equity risk premium is usually defined as the excess return compensating investors for taking on the relatively higher risk of equity investing. According to Aswath Damodaran, who is considered one of the most important theorists of the ERP, there are three main methods to estimate the ERP: historical approach, survey approach, and implied premium approach.

I focused my analysis on the G7 countries (Canada, France, Germany, Italy, Japan, UK, and U.S.) plus China and two country aggregates—the Eurozone and emerging markets. Using 2006-2019 data from the FactSet Market Indices database, I pulled monthly market capitalization from each index’s constituents as well as rolling estimates for dividend and buyback yields for the first, second, and third year not reported. This allowed me to calculate the estimated three-year average yield.

My main finding was the dramatic fall of the ERP on the Italian market; between December 2018 and December 2019, the ERP fell from 9.56% to 5.90%. This is the largest movement in either direction across the countries and areas analyzed. Some geographies showed little change compared to one year ago (Germany, France, Eurozone, and emerging markets). The ERPs for China and Japan are considerably lower than 12 months ago, while those of the U.S. and Canada increased in 2019. 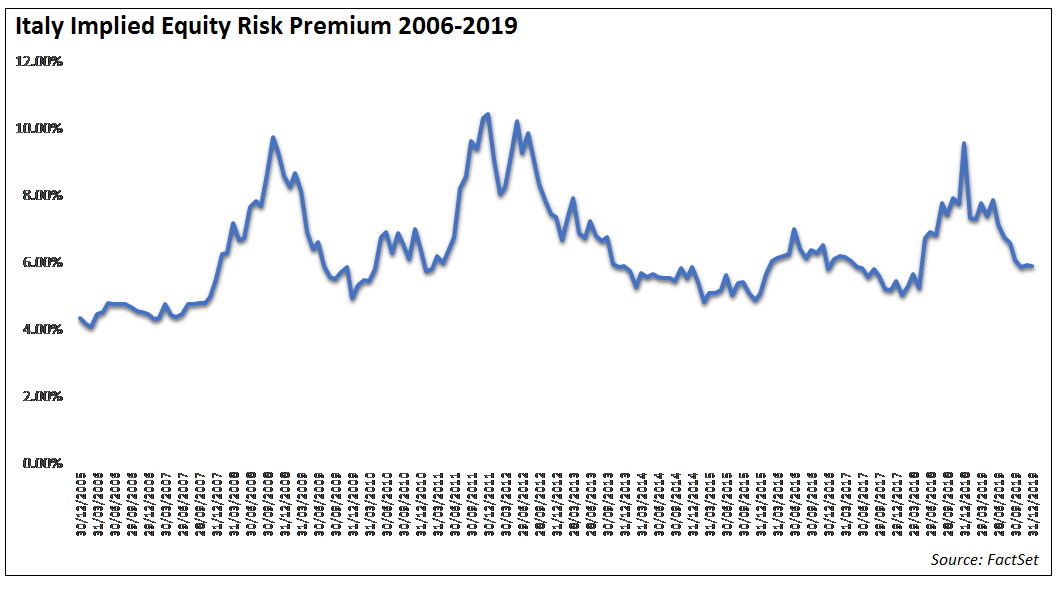 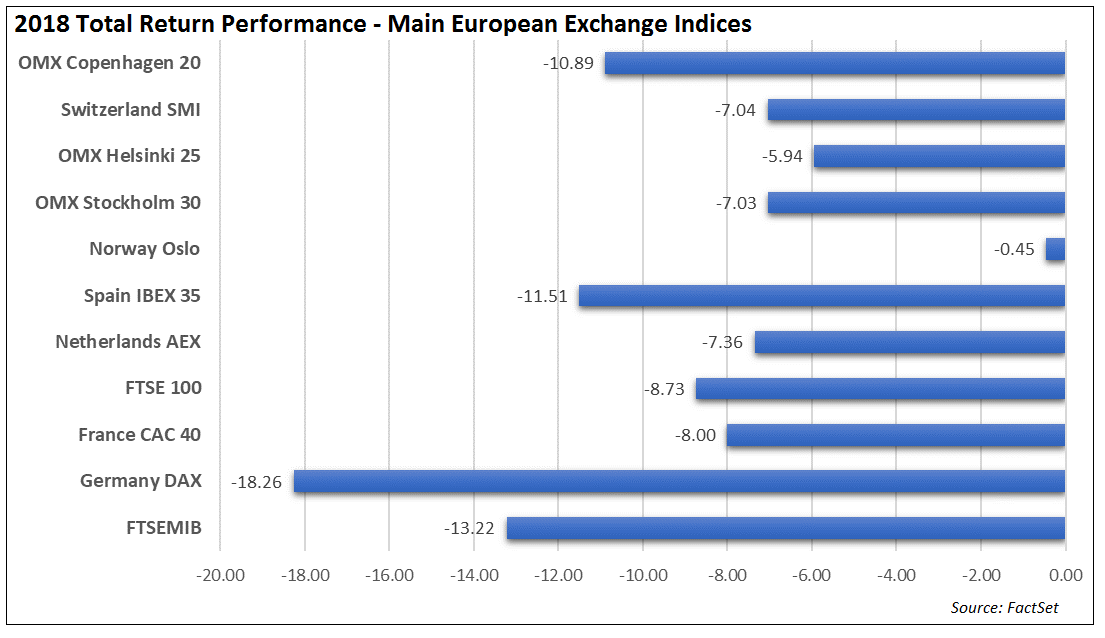 Twelve months later, the situation had changed substantially. At the end of 2019, the Italian ERP stood at 5.90%, below its 14-year average (6.38%), the 10-year spread over German bond yields has fallen below 200bps, the FTSE MIB increased by nearly 30% (its best performance since 1998), and CDS have stabilized. However, Italy’s key macro indicators do not justify this reversal. GDP growth is nonexistent, industrial production is falling, the manufacturing sector is contracting, and government debt continues to increase.

So, where is the truth? Is Italy a patient that has been cured by the European Central Bank’s “therapy” or was 2019 the year of the big illusion? There is no easy answer.

The ERP suggests a growing dichotomy between financial markets and the macroeconomic data. On one hand, Italy largely benefited from the 2019 “risk-on” environment affecting the ERP determinants. On the other hand, Italy’s historically high ERP volatility appears to provide a warning, as indicated by the macroeconomic data. Looking at the ERP over time, the current value is closer to the historical average than the value observed one year ago, but the real question is, how long until the next turmoil?

Mr. Stefano Di Rosa is a Strategic Consultant at FactSet. In this role, he works on growing FactSet's buy-side solutions business in Southern Europe. He has over 10 years of industry experience and prior to FactSet was a Cross-Border Settlement Analyst at Borsa Italiana (London Stock Exchange) and later an Investment Analyst at a wealth management company for HNWI in Milan. Mr. Di Rosa is a Certified International Investment Analyst® (CIIA®) who earned a Master of Banking & Finance from Università Cattolica del Sacro Cuore in Milan.