A Decade of Growth for U.S. Private Equity

As private equity markets continue their rapid growth, we focus on the U.S. market, its current situation, and the 10-year trend of investments and exits, as well as where the valuation currently stands. In the U.S., there are currently 7,141 investors with $900 billion ready to be invested in the market (estimated dry powder* according to Preqin). This is close to three times as much as European investors currently have available.

To understand the investor landscape and where investors are based across the U.S., we started by looking at the data at the state level. The chart below shows the number of investors, AUM, and dry powder for the six biggest states. While California has the most investors in the country, their average raised capital is slightly over half that of investors in New York, clearly an effect of the large venture capital (VC) space on the west coast. California has 1,231 VC firms while New York only has 497. California investors have been the most efficient at investing their raised capital with only 12% dry powder available. New York-based investors have 15% dry powder at hand, matching the country average.

When we did the same analysis late last year for the European market, we saw a higher percentage of dry powder available at European investor peers. Investors in Europe have 18% dry powder at hand, indicating that U.S. private equity investors are more aggressive in their investing. It is interesting to note that New York, Connecticut, and Massachusetts investors together hold 53% of the dry powder and 48% of all AUM across all U.S. investors, as these states all border each other and are in relative proximity to New York City.

If we look at the fundraising activity over the past 10 years, we see a large increase in funds and the amount raised since 2010 with Later Stage and Buyout being the two main fund types. We also see that Real Estate had a standout year in 2017. Since 2014, the amount of new funds and capital seems to have stabilized slightly with 2016 being the record-setting year. 2019 figures are artificially low due to the lack of standardized reporting across the industry and we should see these figures rise as more investors contribute data further into 2020. 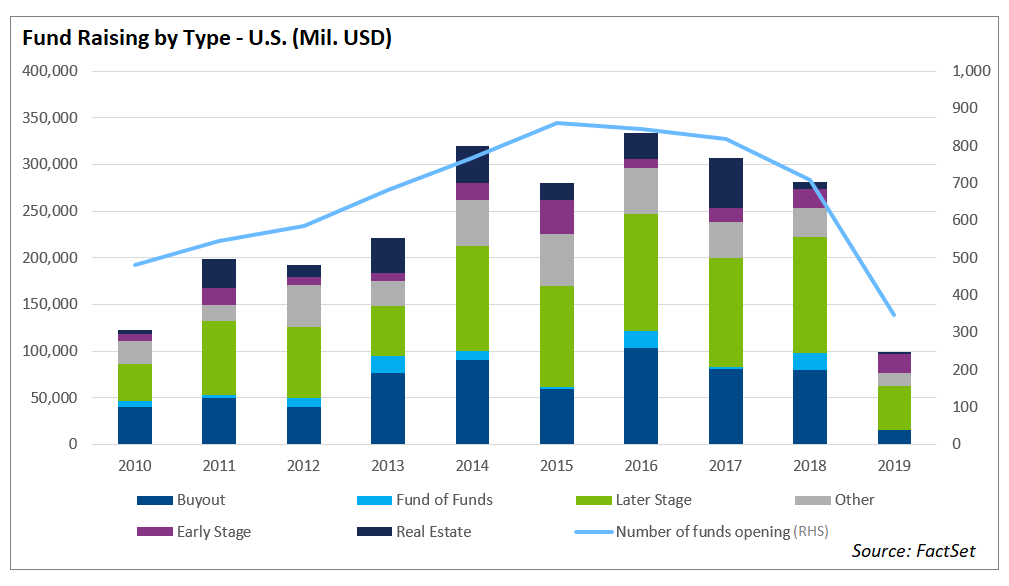 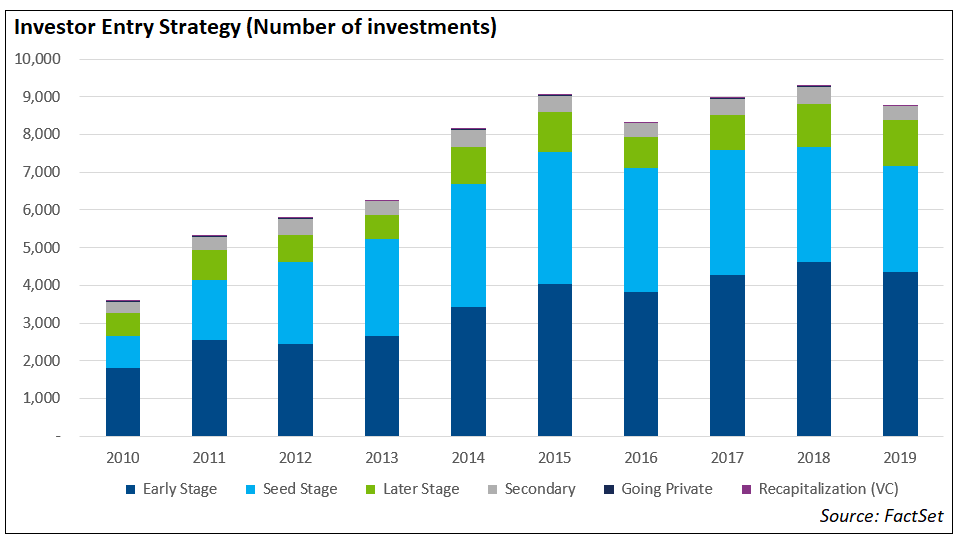 The exit strategies applied have mostly been through either Private or Public Trade Sales while there has been a steady stream of IPOs over the decade, peaking in 2014. Most of the bankruptcies that took place came after the financial crisis, with the pace continuing until 2014; the number of bankruptcies has since declined significantly. We also see that the number of secondaries has increased steadily with a slight increase after 2016. 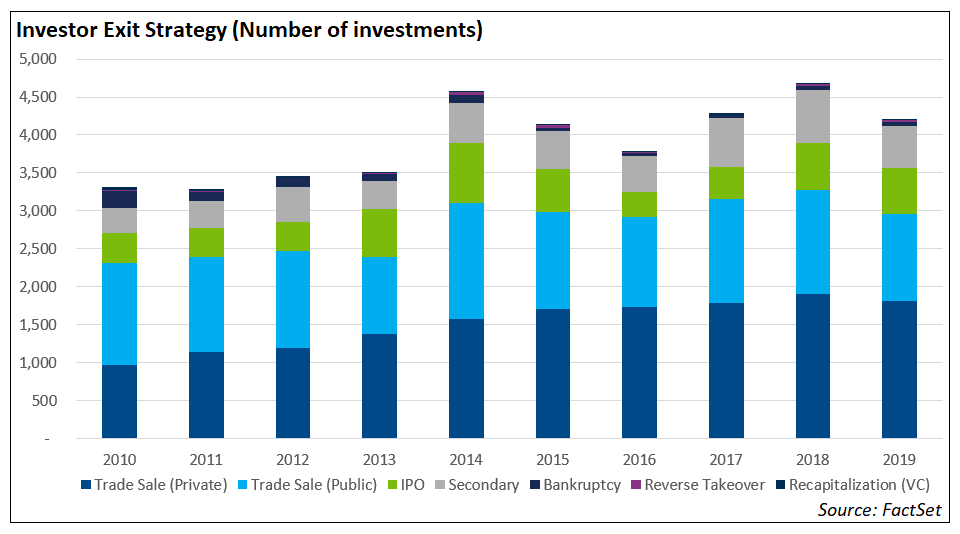 Over the past decade, there have been 94,230 investments and 51,993 divestments for U.S. private equity investors. As shown in the chart below, Packaged Software, Miscellaneous Commercial Services, Internet Software/Service, and Information Technology Services are both the top four investment and divestment industries for investors. As more deals keep taking place in these industries, this is becoming more of a crowded trade as investors keep investing in industries that have a track record of successful precedent transactions and performance.

Since 2010, Packaged Software has been the main industry in which to invest. Investments in this industry have more than tripled since 2010 and this explains most of the growth we see in the chart below. We also see Miscellaneous Commercial Services and Internet Software/Services as two other popular investment industries, but these two industries have only grown by double digits compared to the massive growth in investments within the Packaged Software space. On the healthcare side, investments in Pharmaceuticals: Major and Medical/Nursing Services have increased slightly over the past decade.

Over the last decade, divestments have mostly occurred in the same industries as investments. More and more divestments have taken place in recent years with exits peaking at close to 4,000 in 2018. Given that we have seen more than 4,000 investments made by U.S. investors every year starting in 2011, there is an ever-growing number of investments held by PE-investors that will have to be exited at some point.

If we look at performance, both on an absolute level as well as compared to their benchmarks, we can see that results are mixed. LBO funds performed the worst on both counts. Second from the bottom comes Early Stage funds, which also performed below its benchmark and the other fund categories. The best-performing fund category was Other, beating the benchmark with a 3.9% return. Later Stage and Fund of Funds both beat their benchmarks while Buyouts performed third-best on an absolute level but still underperformed compared to the benchmark. 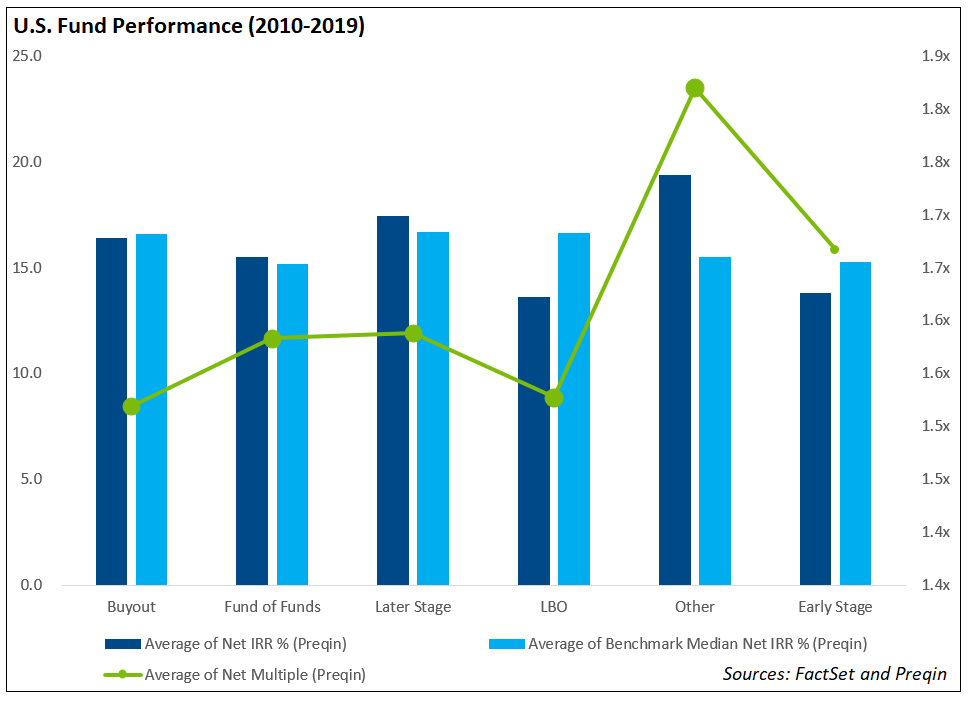 Private equity continues to be one of the key themes and investment options for investors. The U.S. private equity market continues to expand and grow rapidly with close to 100,000 active investments, $900 billion in dry powder, and challenging public market volatility. Even though the number of funds opening has slowed down since the peak in 2015, the aggregated money invested in private equity remains high.

With the public markets currently experiencing unprecedented uncertainty and volatility due to COVID-19, public companies will face funding challenges. On the other hand, with so much dry powder available on the sidelines, private equity investors will be able to continue to invest into new portfolio companies as well as fuel and fund their existing portfolio of companies much more easily.

*Dry powder refers to the amount of cash reserves or liquid assets that private equity firms have on hand to make investments.

Investors are defined as any investor that has made an investment or additional round in the last 10 years.

Only investors with stated strategy are included in entry/exit charts.