Activist Influence at U.S. Corporations Continues to Rise in 2015

An early look at proxy fight statistics for the 2015 proxy season, along with the high profile management victory at E.I. du Pont de Nemours and Company, would on the surface provide the impression that companies may have turned the corner against ever increasing activist success. However, a deeper dive into the data shows that activist influence at U.S. corporations continues to rise. 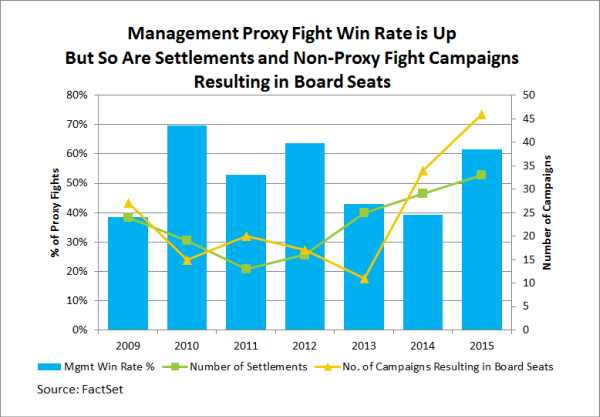 Of course, proxy fight votes don't tell the full story. Settlements continue to rise. The 33 proxy fights that have been formally settled (or were withdrawn after the company made material concessions) as of June 5, 2015 is the most at this point in any year since FactSet began tracking proxy fights in 2001. More importantly, many companies are choosing to grant activists board seats, often as part of a standstill agreement, before letting an activist situation escalate into a proxy fight. Forty-six non-proxy fight activist campaigns have resulted in a board seat as of June 1, 2015, the most in any comparable period according to FactSet data. In comparison, 34 and 11 such campaigns resulted in board seats in the same period in 2014 and 2013 respectively. The data, which is based on the announcement date that the seat was granted, includes all campaigns where activist investors attained board seats directly or had a material say in the appointment of new independent director(s), that were granted as part of an activist campaign or to prominent activists that were schedule 13D filers but had not publicly agitated at the company.