What do Macy’s, QUALCOMM, and AIG have in common? Each of them is a Large and well-established firm that has been the target of an activist campaign in the past year. In July 2015, Jeffrey Smith’s Starboard Value acquired a stake in Macy’s and urged the clothing retailer to spin off its real estate assets in order to unlock additional value for the company. In April 2015, Barry Rosenstein’s JANA Partners pushed QUALCOMM to cut costs, accelerate its buyback program, and make changes to its board of directors. In late 2015, Icahn Associates and Paulson & Co. pressured AIG to break up the firm into three separate businesses. These three examples of activist investors targeting Larger and well-known companies are not anomalies. This is a growing trend within the shareholder activism space. 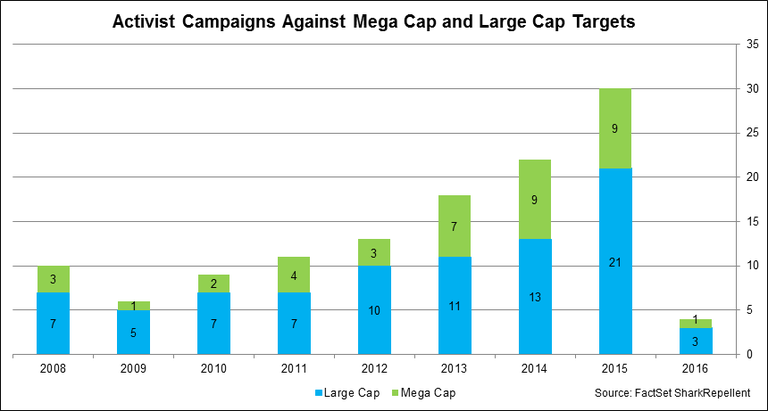 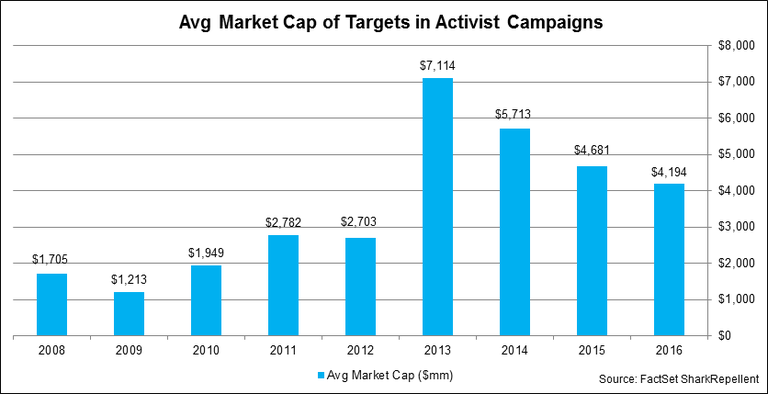 One recent example was the activist campaign between Elliot Management and Alcoa back in November. Elliot reported a 6.4% stake in the aluminum producer and met with the management and board to discuss various ways to increase shareholder value, including additional opportunities regarding the spin-off of its airplane and automotive manufacturing business. In early February, Alcoa entered into a settlement agreement with the activist and appointed three Elliott nominees to the board. 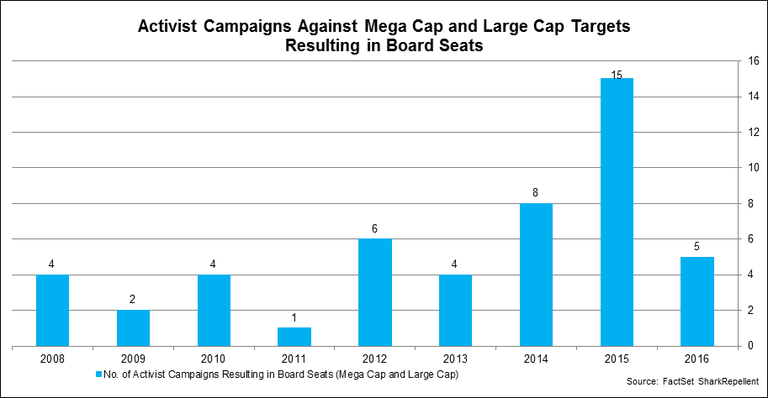 The activist investors involved in campaigns against these large firms are not just big hedge funds with massive assets under management. Smaller, lesser-known institutions are initiating campaigns as well. In January, SpringOwl Asset Management LLC, a small investment management firm based in New York, disclosed a 99-page investor presentation on media and entertainment giant, Viacom. SpringOwl called on Viacom to reconstitute its management and board and recruit new leaders in order to improve its stock’s lackluster performance.

Also this January, two newcomers to activist investing, Altimeter Capital Management and PAR Capital Management, reported a joint 5.5% stake in United Continental. The investors had a combined $8 billion in equity assets under management and no previous activist campaigns. They engaged in discussions with the management and board of the airliner regarding the company’s capital structure, board composition, and strategic alternatives to enhance shareholder value. They later announced their intention of nominating six directors as candidates for election at United Continental’s 2016 annual meeting. These occurrences bring light to the sentiment in the shareholder activism world that, regardless of prominence or size, no company is safe.

Even Outperformers are Vulnerable to Activist Investors

Stock outperformance can be added to the list of attributes that fail to detract activist investors from pursuing campaigns against a company. Even if a company’s stock is performing well, the firm is still susceptible to an activist investor knocking on the door. Of the activist campaigns since 2008, 38% of the target companies’ stocks were up in the last year leading up to the campaign announcement date, and 29% of the target companies’ stocks were up more than 10%.