Spot prices at TTF, a major benchmark in Europe, reached $55/MMBtu on July 8 as Europe is once again preparing for potential gas shortages this winter. While spot prices are still below where they were in March during the start of the conflict in Ukraine, the forward strip has also strengthened rapidly over the last month, reflecting fears of insufficient storage extending well into 2023. Yet, European storage is on much better footing at this point in the summer than last year.

Given recent pricing strength, Europe is pricing in additional risk that belies an otherwise strong storage picture. Are these fears overblown?

Strong Injections of Gas into Storage

On the surface, European gas storage is in a much better place than it was in 2021. Entering 2022, storage inventories totaled 2.04 Tcf, nearly 800 Bcf lower than at the start of 2021 and the lowest January 1 level since 2013. Yet, despite the ongoing conflict in Ukraine, Europe has eliminated the deficit to 2021 and now has a surplus of over 400 Tcf. Not only is storage fuller than it was at the same point last year, but it’s also adding gas into storage at a faster rate. In fact, since the beginning of May, Europe has been injecting gas into storage at the fastest rate since 2019. 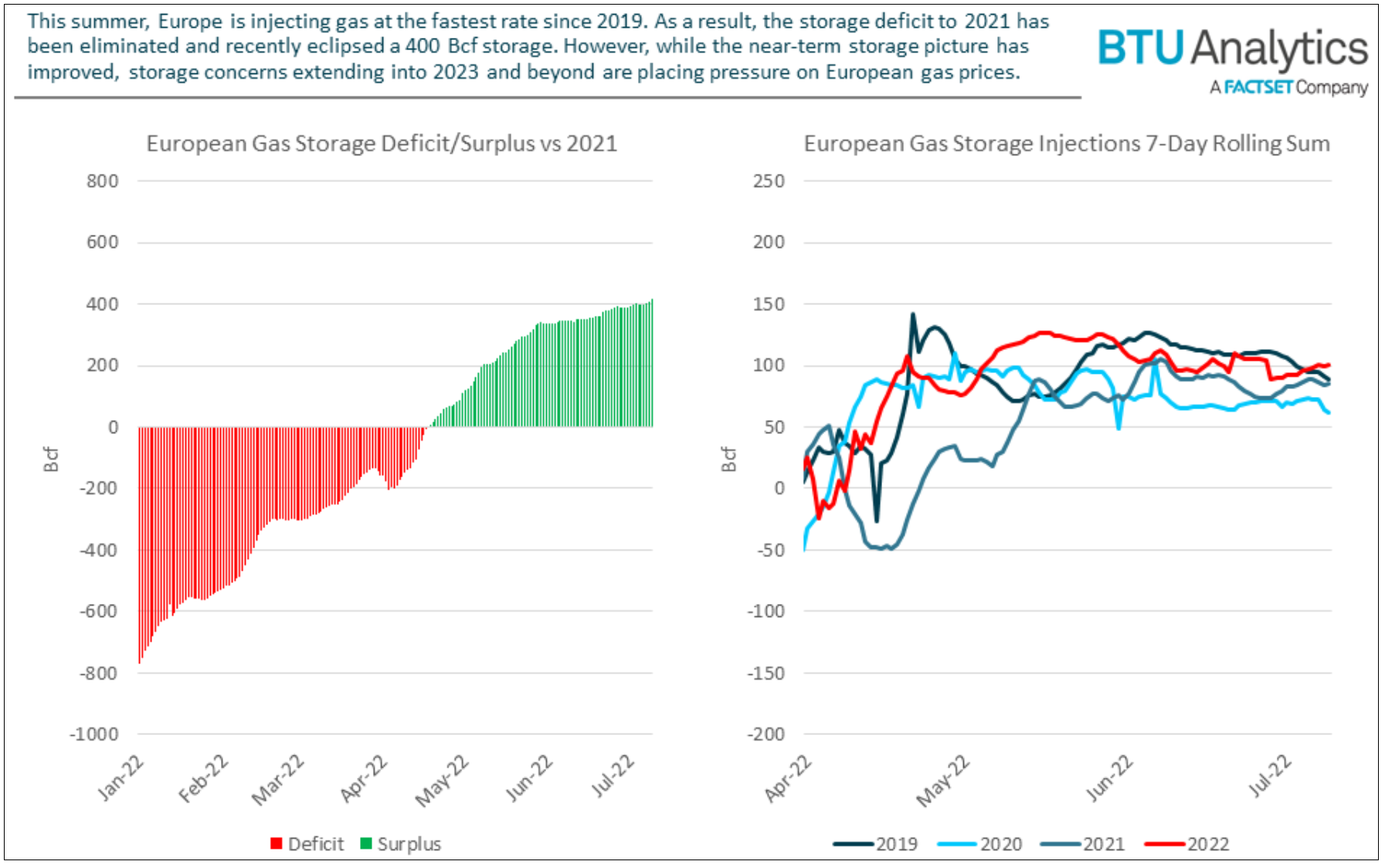 While storage is in a more advantageous position than it was last year, you wouldn’t know it by looking at European futures pricing. After a brief spike in late February that coincided with Russia’s invasion of Ukraine, TTF futures stabilized through the first half of the summer. However, two major supply disruptions in June have changed the trajectory of the forward curve.

In early June, an explosion at Freeport LNG removed approximately 2 Bcf/d of U.S. liquified natural gas (LNG) from the global market. Soon after, Gazprom announced it would restrict flows into Germany on the Nord Stream pipeline due to the inability to secure necessary compressor parts because of ongoing sanctions against Russia. In response, TTF futures pricing for the remainder of 2022 increased 96% over the past month while the 2023 strip increased 76% over the same period. 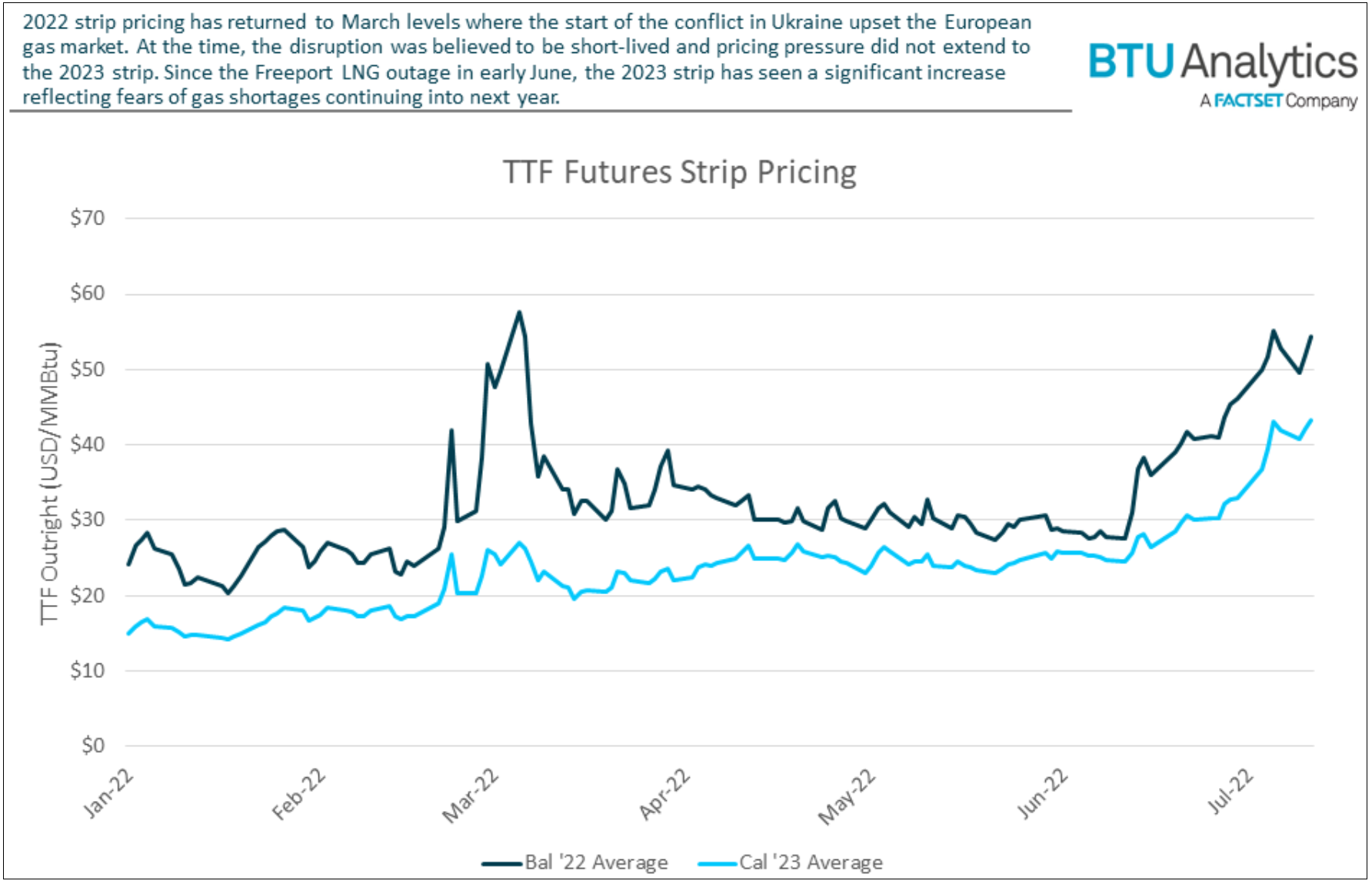 Given current storage levels, Europe is on pace to end summer with over 3.43 Tcf in storage, even if Freeport remains offline and the Yamal pipeline that runs through Europe remains shuttered. However, that assumes that storage continues to refill at a similar rate to 2021 and U.S. LNG continues to run at high utilization. Neither is a given.

This week, Gazprom fully shut down the Nord Stream pipeline for pre-planned maintenance. While the expectation is that the pipeline will return to service, a prolonged absence would remove over 5 Bcf/d of natural gas supply significantly altering the outlook for European storage. In addition, a recent report from Reuters revealed that Cheniere could be forced to temporarily close Sabine Pass and Corpus Christi, two U.S. LNG facilities, to comply with a ruling from the U.S. Environmental Protection Agency (EPA) that was handed down in March. The two facilities currently account for 6.5 Bcf/d of U.S. LNG demand, over 60% of current demand. Of that, approximately two-thirds of Cheniere’s exports have been directed to Europe in 2022.

While it is hard to imagine the Biden administration shutting in U.S. LNG capacity at a time when the U.S. has promised additional volumes to Europe, the impact of losing additional LNG supplies could be catastrophic for European storage. In a worst-case scenario where Nord Stream remains offline and Cheniere is forced to shut down, Europe could enter 2023 with critically low storage levels below 0.5 Tcf. 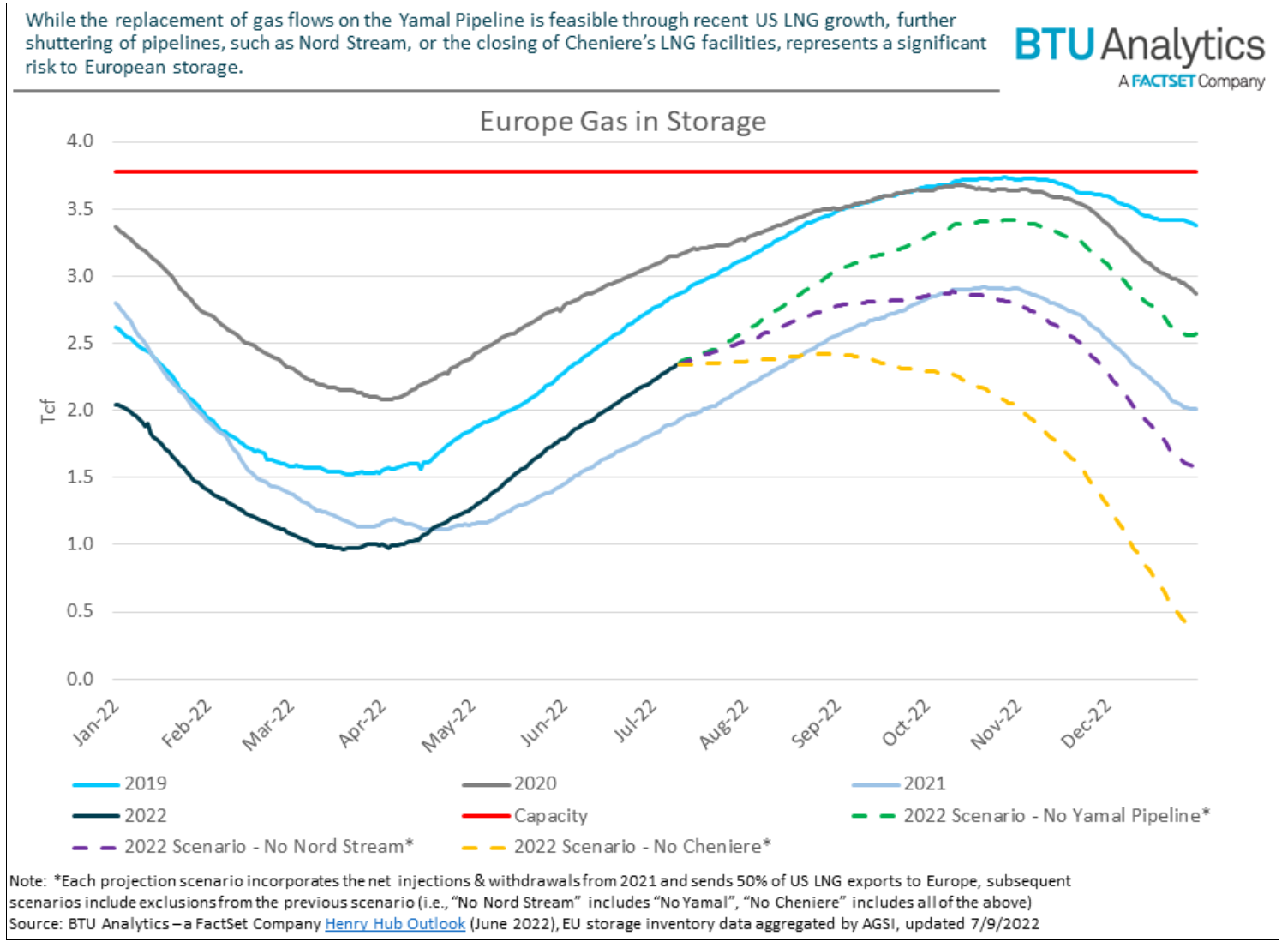 While both of those scenarios seem unlikely, TTF forward pricing indicates that Europe is preparing for the worst.

Whether it’s a historic heat wave, further reduction in Russian supply, diminished U.S. LNG exports, or some combination of factors, Europe pricing reflects growing fears that storage inventories will be strained by the end of this coming winter. However, if Europe maintains its current course, storage could enter 2023 at the highest level since 2021, potentially leading to a significant weakening at TTF. BTU Analytics tracks European storage and its impact on U.S. LNG in our monthly Henry Hub Outlook report.