The COVID-19 pandemic has had a devastating impact on the U.S. economy and cost millions of jobs across industries and occupations. The unemployment rate, which had fallen to a 50-year low of 3.5% at the beginning of 2020, surged to 14.8% in April 2020, a level not seen since the Great Depression.

A recent working paper from the National Bureau of Economic Research (NBER), entitled “This Time It’s Different: The Role of Women’s Employment in a Pandemic Recession,” explained: “Women have experienced sharp employment losses both because their employment is concentrated in heavily affected sectors…and due to increased childcare needs caused by school and daycare closures, preventing many women from working.”

The 2020 Women in the Workplace study from LeanIn.org and consulting firm McKinsey & Company expands on this theme with its annual survey of women in corporate America. The paper highlighted that women in managerial or leadership roles at corporations are not immune from the negative impacts of COVID-19. According to the report, senior-level women are 1.5 times more likely than their male cohorts to think about downshifting their careers or leaving the workforce entirely due to COVID-19.

Given these findings, FactSet delved into the subset of women in managerial or leadership roles at corporations to understand how they fared in 2020. FactSet compiled data on global gender diversity at the Board and Management levels and concluded the following.[1] 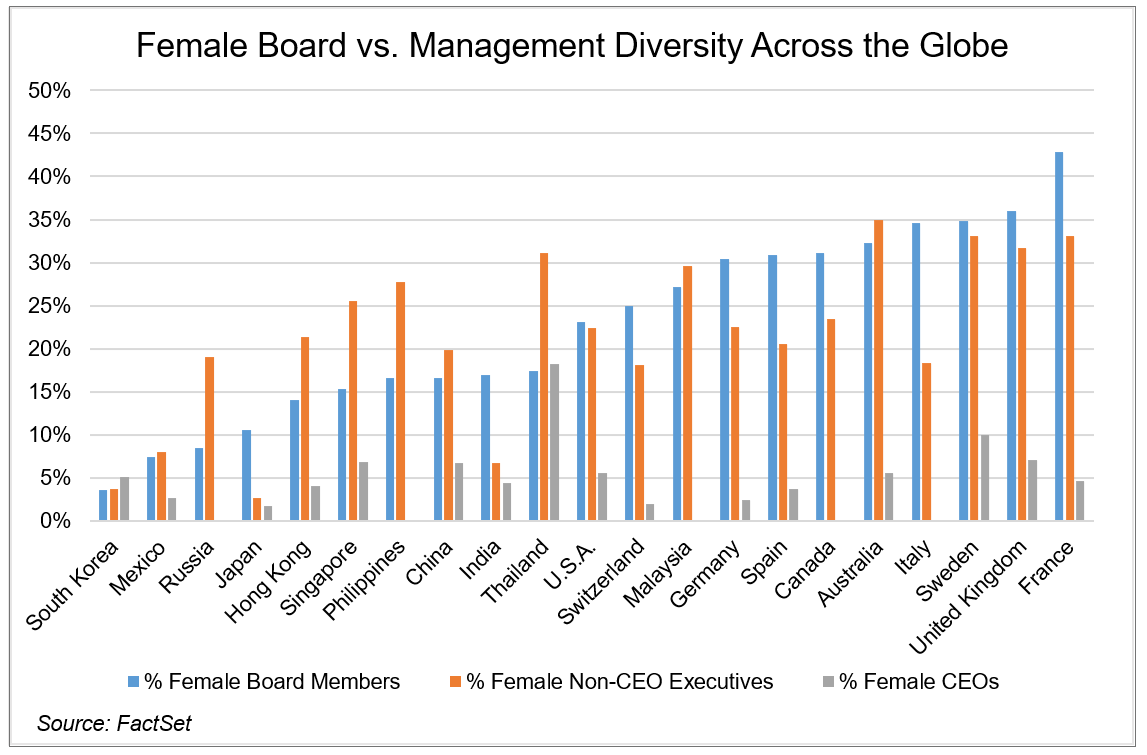 U.S. Remains Behind in Representation of Women in Top Positions

Women occupy 23.1% of board positions in the United States, behind all European countries on our list, as well as Australia, Canada, and Malaysia. France had the highest percentage of women on boards, at 42.9%.

When accounting for CEOs as well, 19.4% of senior executives in the Russell 3000 are women. Strikingly, the business function most likely to be led by a woman is HR; 65% of HR heads in 2020 were women. When looking only at technology and profit-center roles[2], the percentage of women falls to 12.4%. Remove sales/marketing from this list, which includes Chief Marketing Officer roles, and the figure falls further to 9.5%.

The position with the lowest percentage of women in the Russell 3000 is CEO at 5.5%. However, according to the Women in the Workplace 2020 report, this number is greater than the 3% of senior management roles occupied by women of color. 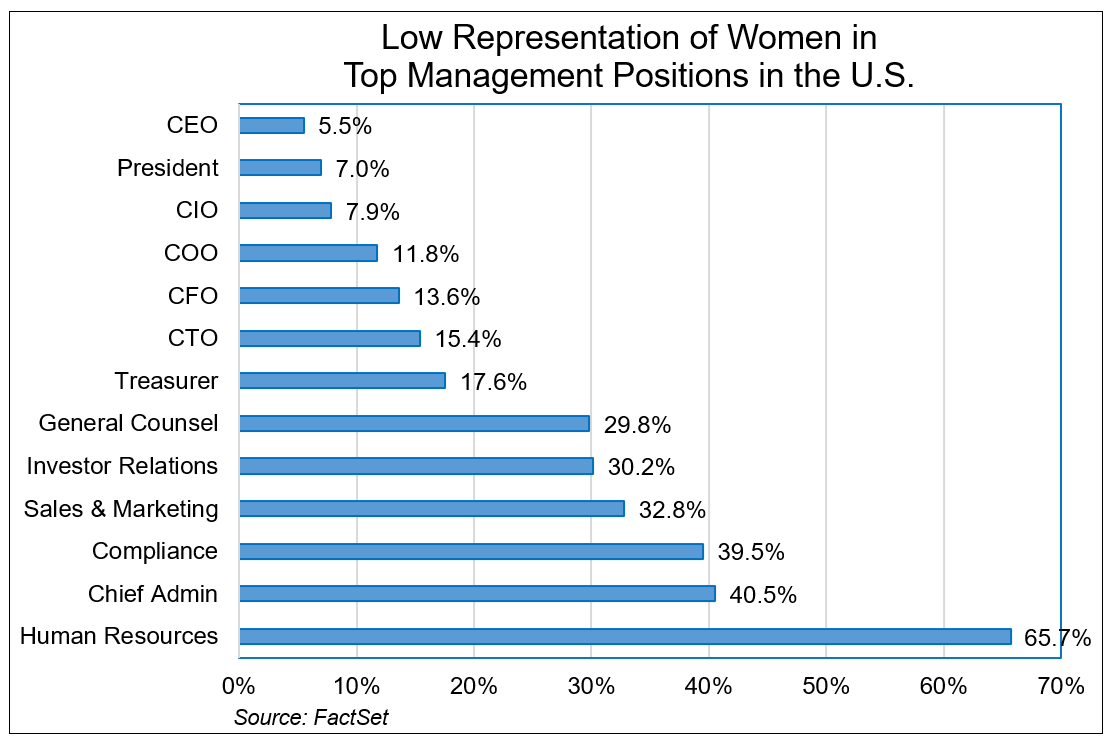 The 5.5% of CEOs that are women tend to work in the utilities, consumer/discretionary, healthcare, and consumer staples sectors. If these industries are excluded, the percentage of women CEOs drops to 4.5%. Women drive 70%-80% of all consumer purchasing according to Forbes, which perhaps accounts for the greater percentage of women leading companies in these fields. 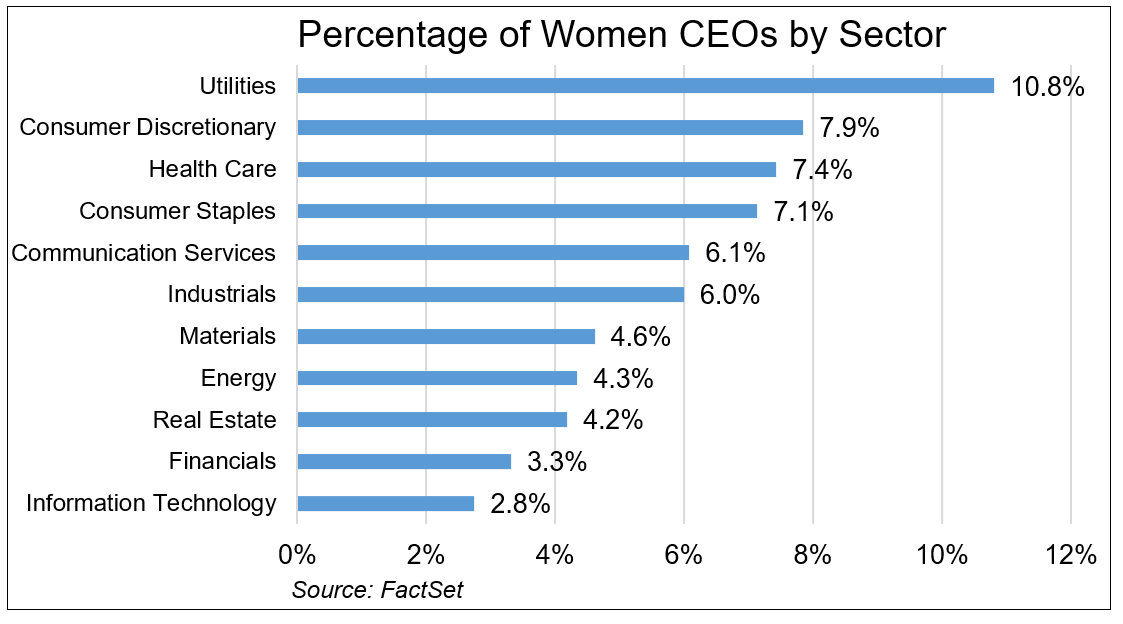 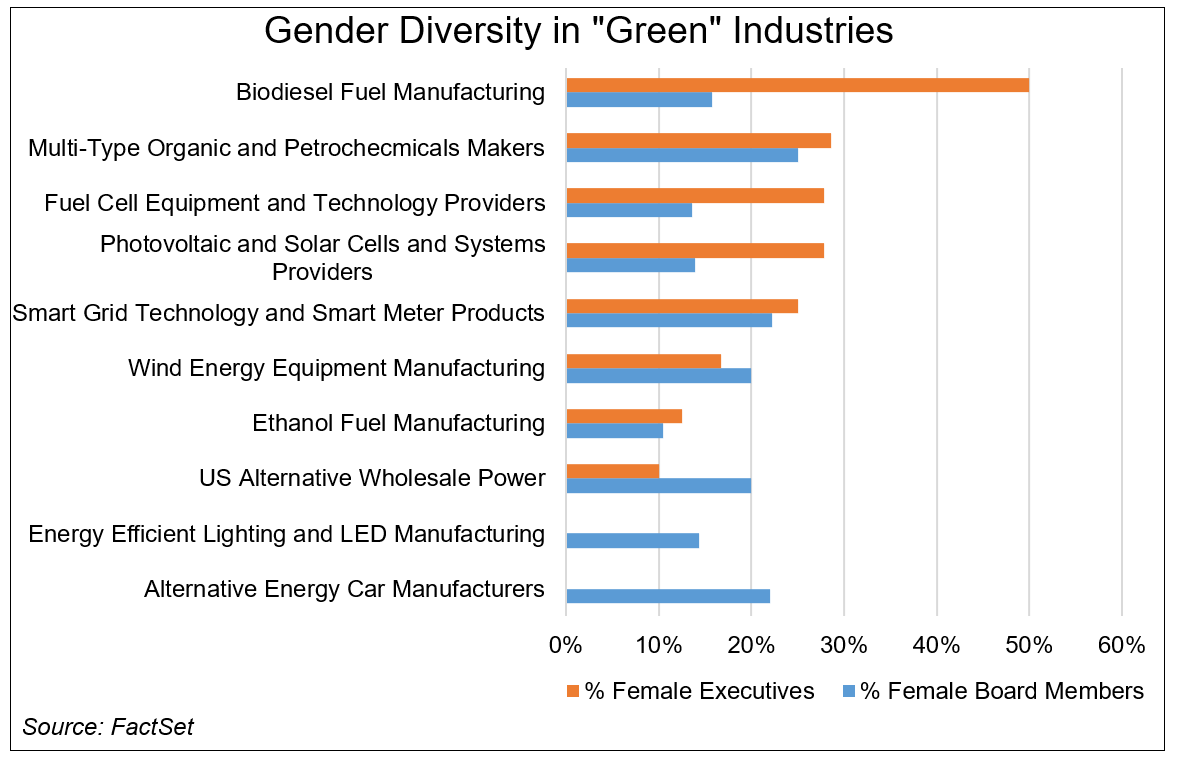 The percentage of women on boards and in senior management roles in the United States has yet to break 25% and lags behind certain countries in the Asia-Pacific region and Europe, where there is a growing focus on disclosure and regulation, particularly around issues surrounding equal pay.

“Green” industries in the United States could serve as a leading indicator of what could be a growing share of women in executive positions, and progress towards a net zero economy could translate to gains for gender diversity despite the overall setbacks due to the Covid-19 pandemic. In addition, policy changes coming from the Biden administration focused on diversity training and combating discrimination in the workplace may bolster the pipeline of female leaders, especially in profit-center positions that are traditionally seen as stepping stones to the chief executive role.

Brianna Carolan and Sara B. Potter, CFA, contributed to this article.

[1] Board and Management data is as of December 24, 2020 and sourced from FactSet’s People database. The Russell 3000 had 3,057 companies as of this date. Indices respective to each country were used for the global analysis. Industry data was compiled using FactSet RBICS classifications.

Environmental, social, and corporate governance (ESG) are three central pillars when measuring the sustainability and societal...

Are Conventional ESG Models Fit for Purpose in the Fourth Industrial Revolution?

Could COVID-19 Be a Catalyst for Improved Reporting and Transparency?

FactSet’s Vanessa Barnett discusses whether COVID-19 could be a catalyst for improved ESG reporting and transparency for the...