The crisis we are experiencing today is unlike any other. With the rapid global spread of the COVID-19 novel coronavirus, we are witnessing a crisis that started in the real markets and is now unleashing its effects on the financial markets. The disaster is unfolding both on the demand side (the almost total blockade of domestic and foreign consumption and investment) and on the supply side (companies are reducing production capacity and with it, labor and capital factors). On top of this, the oil market battle between Russia and Saudi Arabia has led to a collapse in the price of “black gold” causing a further shock on the supply side.

Countries are already responding with a mix of policies; this includes fiscal support as well as massive monetary policy interventions. The goal is to avoid a post-war scenario in which economies would be forced to rebuild from scratch by providing all possible support to stimulate a post-slowdown recovery when the pandemic has ended. On the fiscal side, countries are responding in a coordinated way, using deficit spending, delaying and/or canceling tax levies, enhancing social cushions, and supporting selected companies/industries. However, in Europe, deficit spending means more debt in the future, a serious problem for countries already running deficits and/or having high debt levels.

Financial markets already suffering steep losses due to the anticipated economic and commercial impact on the entire global supply chain saw record losses as fears about the pandemic's uncertainties added to those over the sustainability of country debt levels. Volatility indicators have reached all-time highs (the VIX briefly broke through 82, a level not even seen during the 2008-2009 global financial crisis) and we entered a bear market in record time.

Central banks intervened with massive liquidity inputs, the so-called "bazooka." The Federal Reserve (already active for a few months on the repo market) has allocated trillions of dollars to support the American economy in addition to bringing the Fed Funds target rate to 0%. We also saw a coordinated intervention of the six central banks (C6) to to ensure the liquidity of the U.S. dollar. The European Central Bank (ECB) launched a support program for eurozone countries through the PEPP. Other central banks (Bank of England, Bank of Japan, Reserve Bank of Australia, etc.) followed with their heavy ammunition.

The mix of monetary policies included the usual policy rate mechanisms as well as more creative tools. The latter have included quantitative easing, support for the interbank market, yield curve manipulation, the extension of vehicles that can be used as collateral for repo operations, and support for business credit on commercial paper. Financial markets have shown a thirst for liquidity like never before, so much so that even safe-haven assets such as gold have seen unexpected losses as traders have preferred selling in order to get cash.

Given this scenario, it’s interesting to consider how the financial portfolios of savers and investors might react. There are various tools available for this type of analysis, but here we will rely on stress testing. We will start from the assumptions of a macroeconomic shock using proxies for the financial variables at our disposal to examine the possible effects on a model portfolio (balanced and multi-asset).

Our model portfolio is designed to represent a common asset allocation of a European institutional investor. Here is a breakdown of its composition:

The charts below provide details of the portfolio breakdown (exposure in blue) with an ex-ante annualized daily volatility indicator (in orange) across various asset classes and factors.

As mentioned, 50% of the portfolio is in equities, 36% is in government bonds, and approximately 14% is in corporate bonds.

The most exposed equity sector is Financials, followed by Health Care, Industrials, and Consumer Staples. 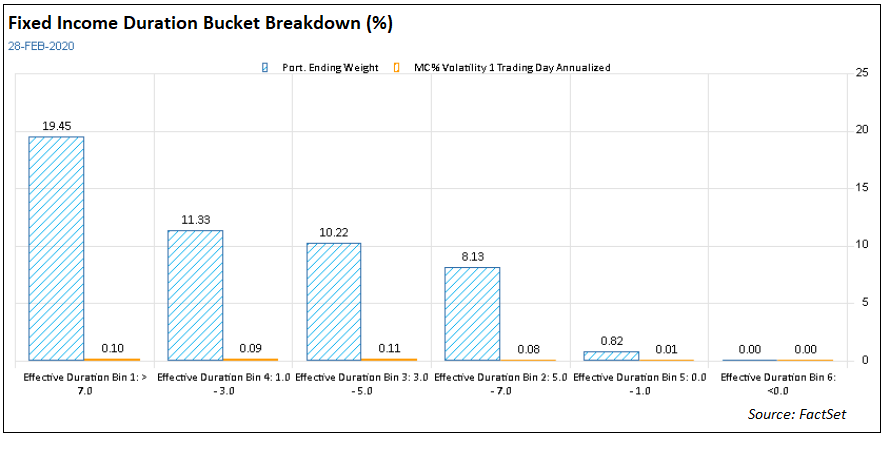 Given the composition of the model portfolio, especially the concentration in euro and USD, our goal is to build two stress scenarios to assess the response to the representative shocks of the SARSCOV-2 pandemic at the base of COVID-19. We need to start with a date when the effects of the shocks were not yet known and, above all, the fiscal and monetary countermeasures put in place were not known.

Scenario one assumes a late- or non-response of central banks (primarily the Fed and ECB). This is our "No Bazooka" scenario, in which high losses are expected as a result of exogenous shocks. However, in scenario two, we assume an immediate response from central banks to support system liquidity; this is our "With Bazooka" scenario. In this scenario, at least on the government bond side, losses are expected to be reduced compared to the first scenario.

Scenario One: "No Bazooka" (no explicit assumptions about interest rates)

Scenario Two: "With Bazooka" (central banks are assumed to intervene, a downward shift in the EUR and USD rate curves of 75bps, no widening spread with Italy)

The scenarios suggest a global shock on equity markets without any particular resilience.

Currency shocks are representative of a generic flight-to-safety on USD, JPY, and CHF while uncertainty over the UK situation translates into a 10% depreciation of the GBP against the euro. The euro loses 5% against USD, JPY, and CHF.

The sector impact attempts to translate the supply chain shocks and the near-total shutdown on sectors such as Automotive, Airplane, and Consumer Discretionary. The additional shock on oil hits the Energy sector even harder.

The shock to the bond component assumes that spreads on corporate bonds, both investment grade and high yield, will widen. In scenario one, without the intervention of the central banks, we see a widening of spreads in the peripheral countries of the Eurozone, which leads to a 75bps widening on the spread of Italian government bonds. In scenario one, there is no assumption about yield curves, while in scenario two—where expansive intervention and monetary support are assumed—a downward shift is assumed for both the EUR and USD yield curves.

Market volatility is translated through a shock on the VIX of 30-point increase in a single day.

To simulate a credit crunch and tension on the money and interbank markets, we assume that the spread between the yields on Forward Rate Agreements (FRAs) and the Overnight Index Swap (OIS) doubles overnight. 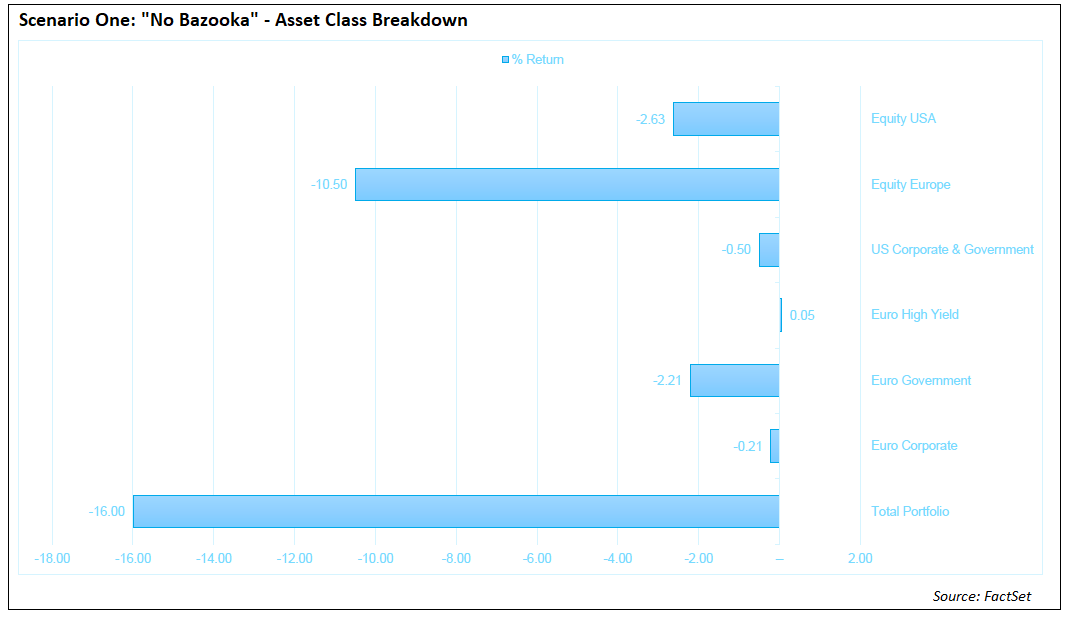 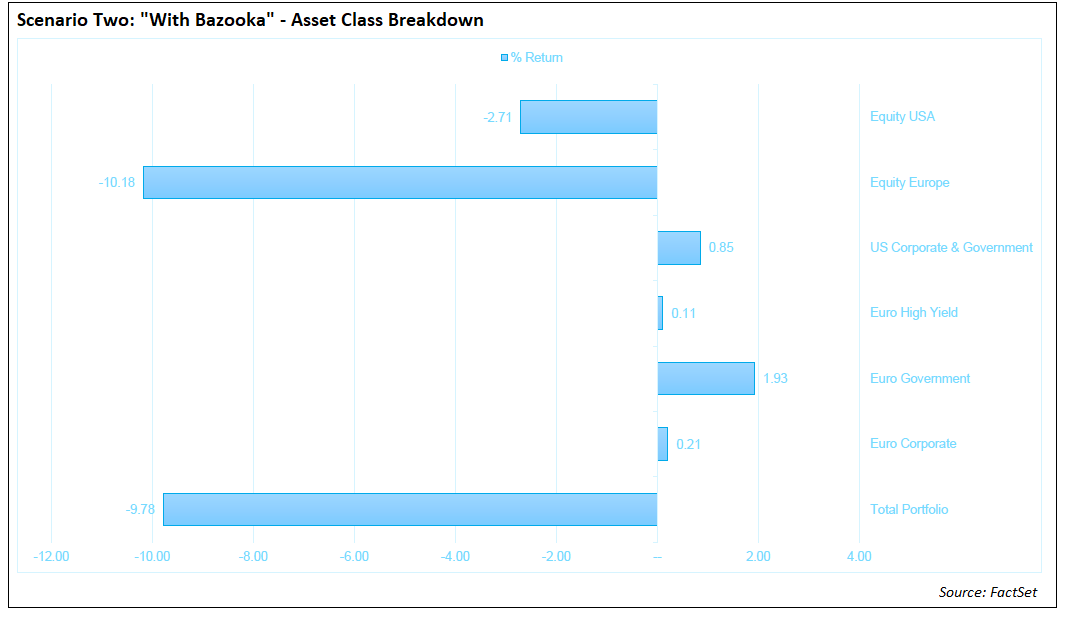 In scenario two, central bank intervention and the resulting shift in the euro and USD yield curves would not have a significant impact on equity losses. However, we would see a reduction in total portfolio losses to just under 10% compared to 16% with scenario one due to the positive impact on the bond component. The European government bond piece would gain almost 2% due to the "neutralization" on the widening of Italian spreads. Corporate and U.S. government bonds see a positive performance of about 85bps, while the European corporate bond component adds about 21bps.

Moving to factor analysis, exposure to the equity component explains about 90% of the entire loss in scenario one, slightly mitigated by currency exposure (the appreciation of the U.S. dollar and the Swiss Franc against the euro). In scenario one, exposure to interest rate risk implies a negative contribution to the total loss of almost 2%, plus a loss due to exposure to Italian government bonds (-1.32%). In scenario two, on the other hand, the central bank intervention hypothesis is well captured by the positive 4% contribution of interest rates. However, by removing the exogenous shock on widening spreads for Italy, this remains a loss due to exposure to other peripheral countries of the euro area. Exposure to corporate bonds represents a loss in both scenarios. 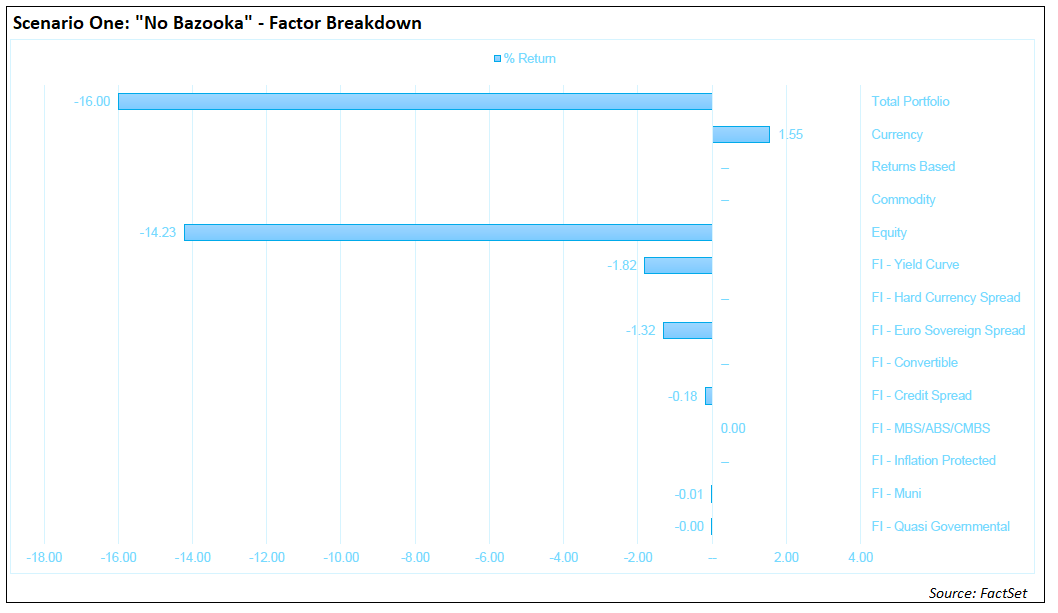 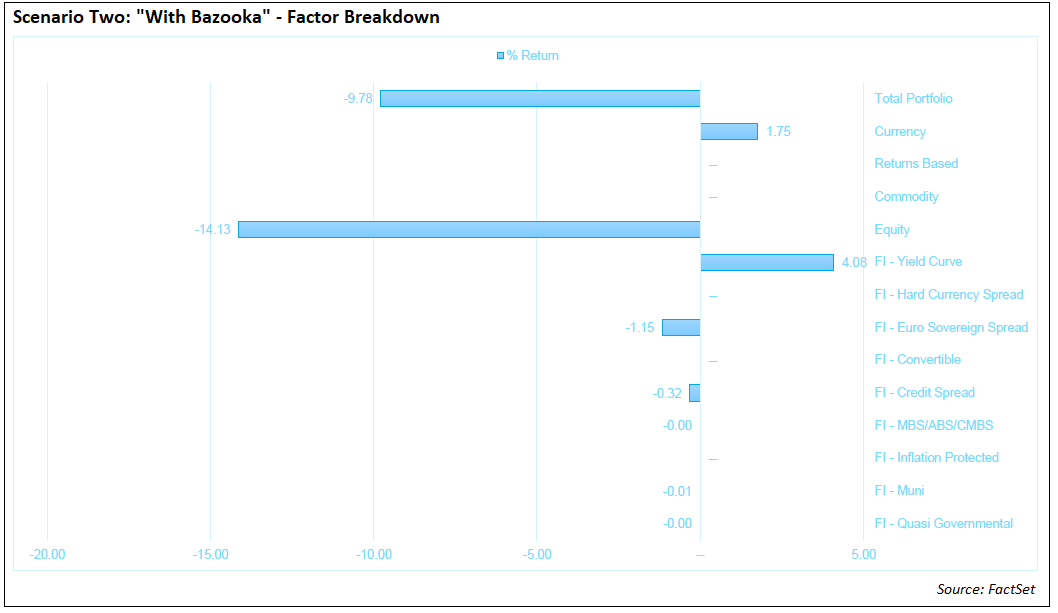 Our analysis shows that a shock to the real economy could affect financial markets and result in a financial crisis, especially without the proper supportive measures. Monetary policies can give the necessary oxygen, especially in the short term to limit the effects of panic selling and give time for fiscal policies to develop their effects in the medium- to long-term. However, the task of both is difficult as its aim is to get to the heart of a market that has almost completely lost business confidence. Financial markets will only recover as a result of the restoration of normal conditions in the real economy. Until then, it will take being calm and prudent in the management of portfolios. 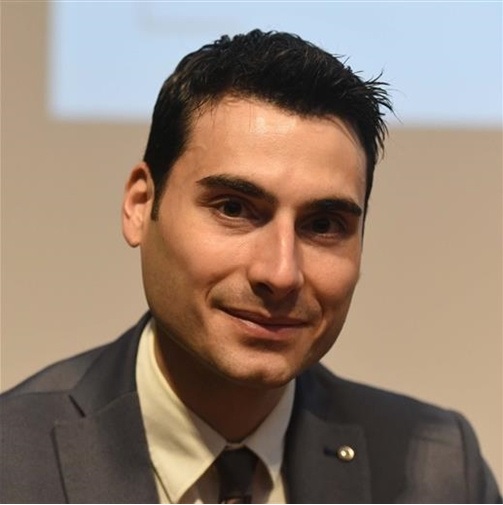 Mr. Fabio Fais is a Senior Analytics Specialist at FactSet. In this role, he supports clients through FactSet’s Analytics Solutions suite tools such as Quant, Risk, Performance, and Coding. He collaborates on thought leadership economic and financial analysis while contributing to FactSet Insight. He joined FactSet in 2014 as a consultant and transitioned into a specialized role within a few months. He is a technical reference in Southern Europe and EMEA and a mentor for junior consultants. Mr. Fais earned an M.A. in Investment Analysis and Portfolio Management, a B.A. in Economic Science from Sassari University, and is a CFA charterholder.