The Wall Street Journal would have us think so. In a weekend article, The Business Case for More Diversity, the Journal boldly claims that "diverse and inclusive cultures are providing companies with a competitive edge over their peers." This is the sort of headline which will captivate investors looking for ESG solutions where they can have their socially responsible (vegan?) cake and eat it, too.

Their evidence? This nice chart:

Sounds great, right? So, how did they do it? Thankfully, they disclose their methodology: they scored each of the S&P 500 companies on 10 criteria, such as "Role of head of diversity and inclusion" and "Diversity of board of directors."

And then looked at trailing returns.

This is lookahead bias and it's one of the cardinal sins of quantitative investment research. We can't use information that wasn't available at the time to determine whether that information would then have led to outperformance! If we do, we might have the causality all wrong, or even perfectly backwards. It's possible that these companies did well, became large, and only then had the resources - and the demands from institutional investors such as pension funds, who now track their portfolios' ESG scores from various providers - to invest in activities which would improve their diversity scores. We don't know, because the WSJ doesn't currently score a point-in-time universe of stocks every year with a consistent methodology.

It's also a very, very small sample size of 20 stocks. No self-respecting systematic investor would base a decision on including or excluding an investment factor based on a static 20-stock portfolio over a 5- or 10-year period. There is just far too much noise in stock prices for us to have any confidence that the result is statistically significant with that N.

Next: the outperformance measure. We can't test the WSJ's claims about the bottom-20 stocks, because they were kind enough to those companies to not include that list, but they did list the top 20. We took these 20 stocks and looked at their performance since 2000, and indeed we see some outperformance relative to the average top-500 stocks, albeit all post-GFC: 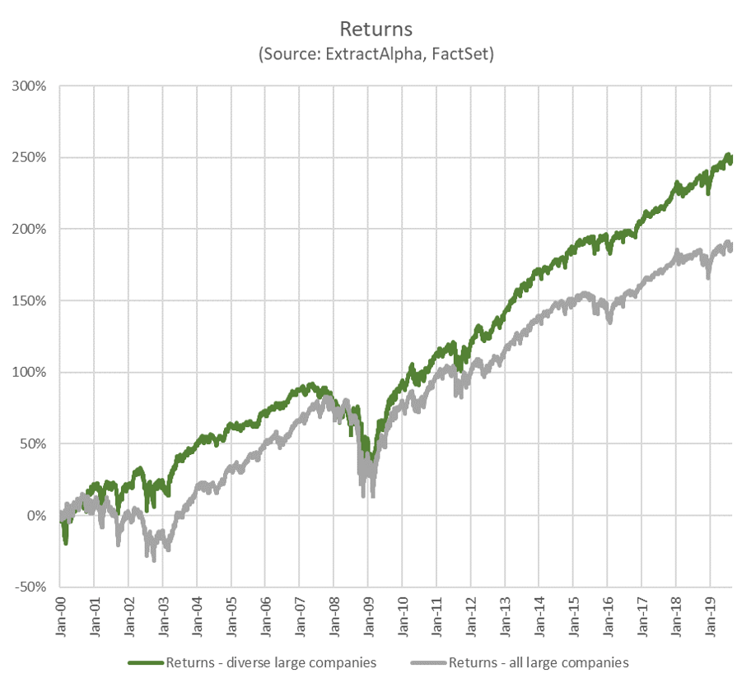 It's also worth noting that when we go back this far, we introduce a special case of lookahead bias: survivorship bias. Each of these 20 companies still exist today. Many of the top-500 stocks from back in 2000 actually went to zero (Radio Shack, anyone? Lehman?) but we didn't know that would happen at the time. So, by virtue of even existing today, these companies by definition did pretty well compared to the S&P 500.

There's also another problem: these twenty companies aren't random. They have some common characteristics. For example, they are, even by the standards of the S&P 500, quite large. It's possible that they outperformed not because they're diverse, but because they had an exposure to some risk factor which could be equivalently captured in some other, simpler way. So, next we use ExtractAlpha's Risk Model to look at the risk exposures of these twenty stocks over time: 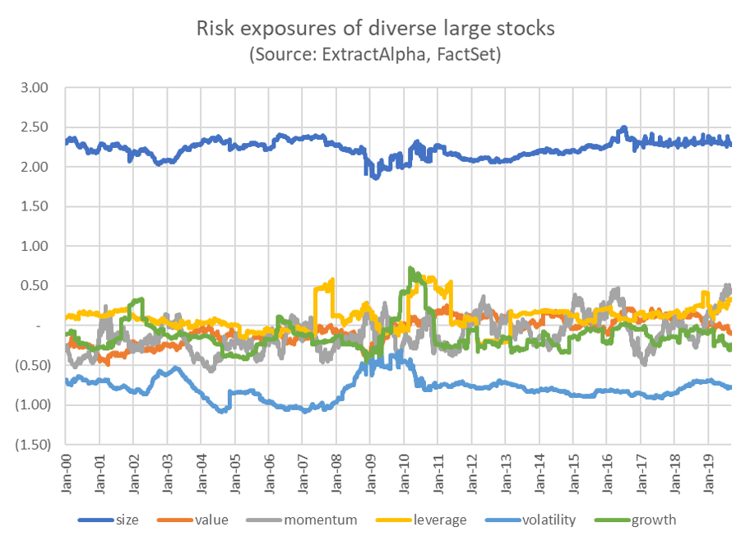 The lines represent the number of standard deviations away from the average stock these twenty stocks are, across seven risk factor dimensions such as size (market cap and total assets), value (P/E ratio, etc), and so on. Here we can see that these twenty stocks have been very large, and quite low-volatility, for many years. In most other respects they are fairly average. We can take these characteristics and strip them out of the returns to see whether these stocks outperformed relative to other stocks with similar characteristics; we do so using a regression, which gives us risk-adjusted, or residual, returns. Here are the cumulative risk-adjusted returns for these 20 stocks versus the top 500 over time: 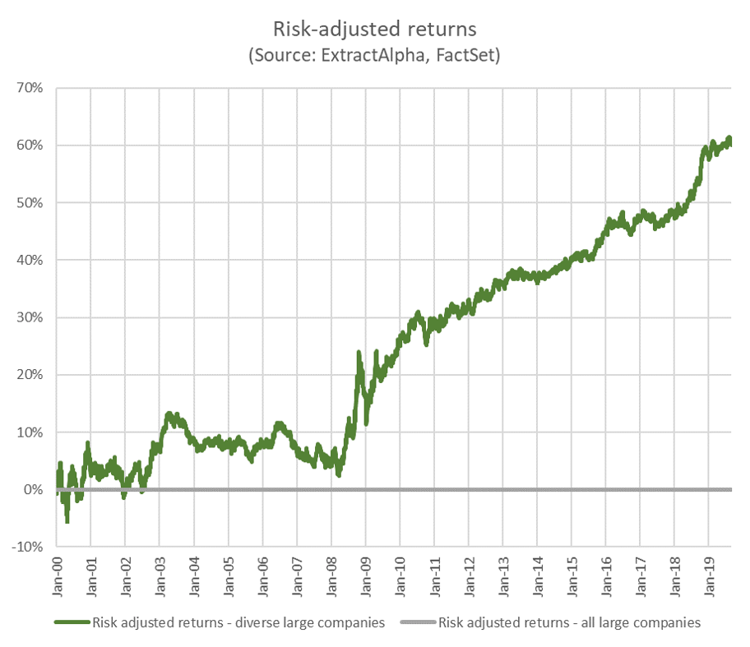 That is to say, controlling for risk, these twenty companies have in fact outperformed since 2009, something which was not obvious from the original performance statement.

So we can conclude that twenty large companies which the WSJ determines to be currently diverse have outperformed, controlling for risk, for the most recent ten of the last nineteen years. This doesn't say anything about whether they, or other companies like them, are likely to continue to outperform.

In fact, these companies aren't even necessarily great actors by other ESG metrics. We loaded them up into Watchlist Analytics in ExtractAlpha Insight to see what the group's overall exposure to various corporate responsibility-related metrics might be, and the portfolio actually ended up with a pretty negative score of 26 out of 100 on the Regulatory dimension: 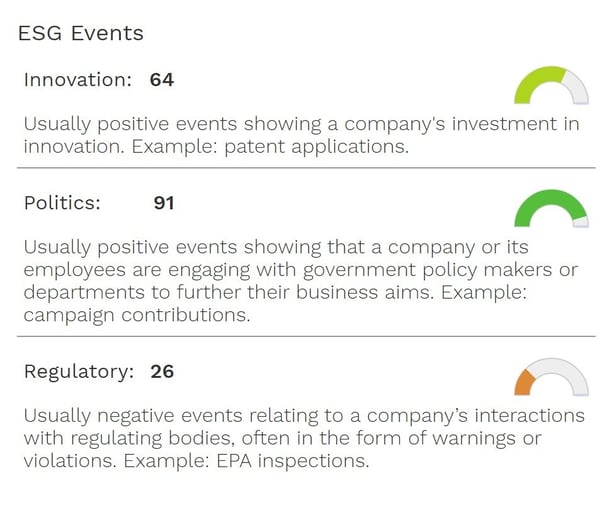 With Walmart's 24 OSHA workplace inspections in the last year, and Wells Fargo's and JP Morgan Chase's 6,000+ customer complaints each, these aren't necessarily the most employee- or customer-friendly companies out there.

It's tempting to point to headlines like the Journal's to tout the importance of socially responsible investing, but doing so does a disservice to the rigorous research which would be required to actually determine whether various company initiatives and characteristics in fact lead to outperformance; these results are pseudoscience at best, and wishful thinking at worst. From the evidence presented in the WSJ article, the claim that there is a clear link between diversity and returns is simply not true. Retail investors risk following advice like this to the detriment of their portfolios; they're better off holding a diversified portfolio - like a low-cost S&P 500 ETF - than a concentrated portfolio of diversified companies.

Some more robust research papers indicates that traditional ESG factors are likely to be useful for forecasting risk rather than returns. And we've found that some non-traditional ESG metrics such as innovation (as measured by ExtractAlpha's ESGEvents library) can be predictive of returns. But these claims require rigorous quant work and accurate point in time data. Systematic research into ESG is in its infancy, and a more measured approach is called for. 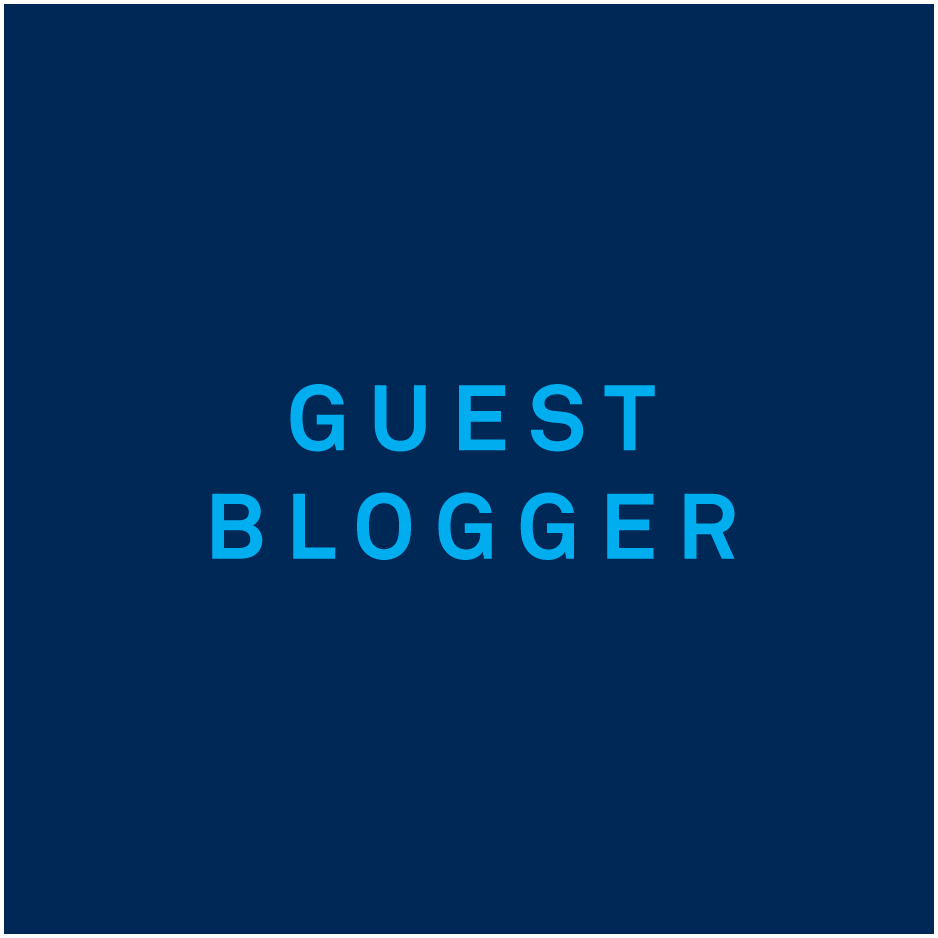 Vinesh Jha founded ExtractAlpha in 2013 with the mission of bringing analytical rigor to the analysis and distribution of unique data sets to capital markets participants. From 1999 to 2005, Vinesh was the Director of Quantitative Research at StarMine in San Francisco, where he developed industry leading metrics of sell side analyst performance as well as successful commercial alphas and products based on analyst, fundamental, and other data sources. Subsequently he developed systematic trading strategies for proprietary trading desks at Merrill Lynch and Morgan Stanley in New York. Most recently he was a senior researcher at PDT Partners, a spinoff of Morgan Stanley's biggest prop trading group.. Vinesh holds an undergraduate degree from the University of Chicago and a graduate degree from the University of Cambridge, both in mathematics.