Much of the focus on mergers and acquisitions is on mega deals that change industry landscapes (Disney/Fox, Amazon/Whole Foods, CVS/Aetna). However, these deals are typically only relevant and dissected at announcement, when the shock of a deal makes for good headlines and dinner party chatter, and everyone questions the rationale as well as impact to the competitive landscape.

Once the deal is completed though, there is little discussed in the press. From here, the consultants and academics take over, and everything becomes a study of deals—integration, metrics, synergy, and a continuous stream of buzzwords. These don’t make headlines, but they are no less fascinating.

From announcement through completion and beyond to integration, at the core of every discussion and study is ultimately an attempt to identify whether the deal will be successful. There is no shortage of success metrics, including financial (revenue growth, cost savings) and non-financial (market penetration, new customers). Relatively common internal financial metrics include ROI and IRR, that supposedly allow management to track and ensure the financial benefits of the deal are met.

For our purposes, we will focus on buyer shareholders because no one is an insider on every deal and therefore no one has direct insight into the internal deal metrics. We will look at the surviving entity, to which the acquisition benefits are supposed to accrue, assuming a successful acquisition and integration. This takes us to the single metric that all public companies have in common—a market for their shares that is supposed to incorporate all manner of information. Whether you believe in the Efficient Market Hypothesis is a discussion for another day.

Do U.S. Public Buyers in Large Strategic Acquisitions of U.S. Public Companies Generate Returns Above the S&P 500 After Deal Completion?

Filtering all strategic deals greater than $500 million between U.S. public companies since 1998 results in 1,264 transactions with an average deal size of $5.1 billion (median of $1.8 billion). From here, we can get the six-month and one-year returns for each buyer starting from the close date, and compare it to the six-month and one-year returns for the S&P 500 from the same dates.

The full results show that on average over both the six-month and one-year post-completion horizons, buyers are underperforming the S&P 500 by a wide margin.

The chart below shows the initial comparison for all deals post-completion over one year. 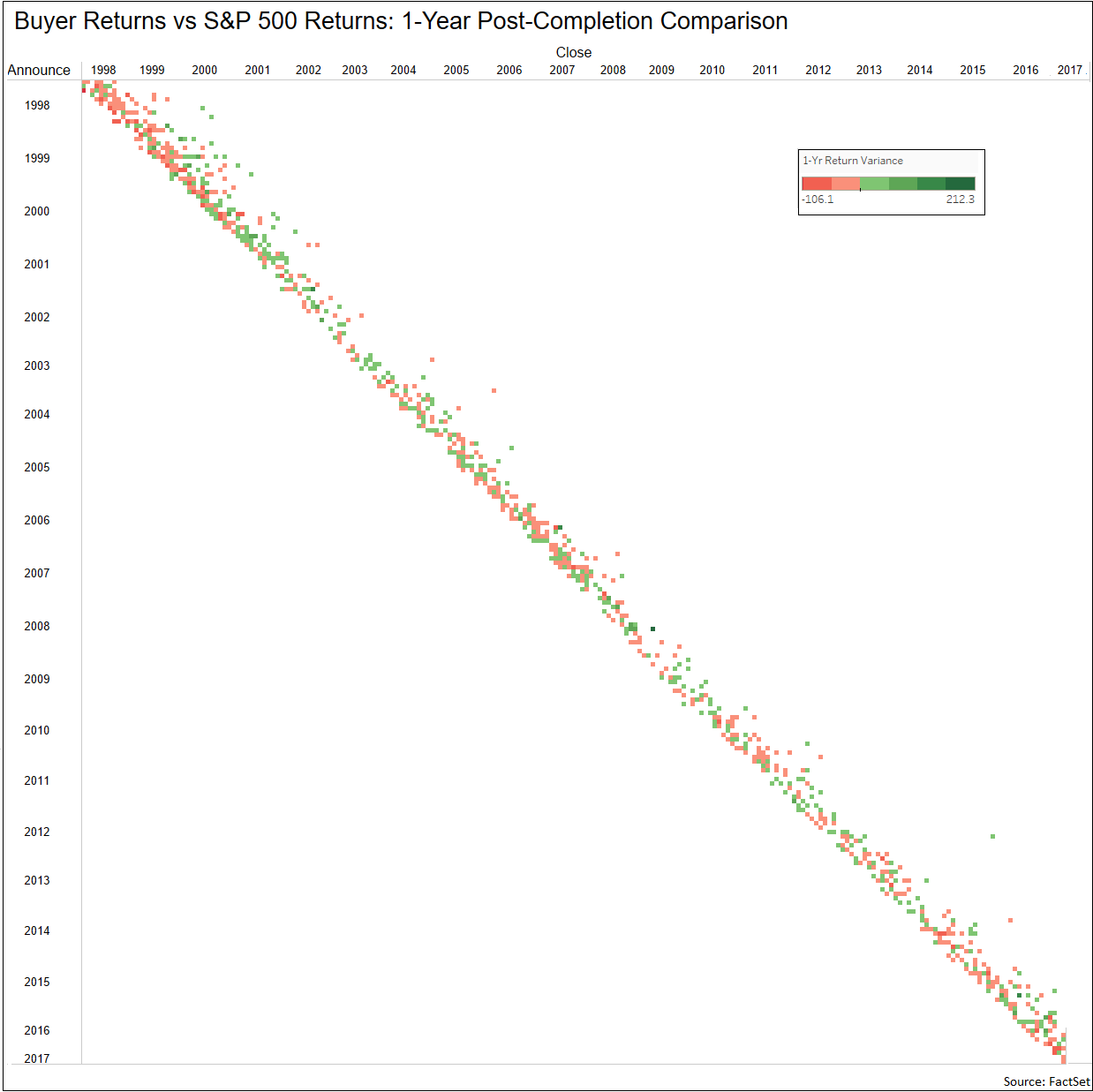 Expanding the view to look at deal closings by quarter, and then comparing the S&P 500 (top) with the buyer return (middle), gives us the variance (bottom). Apart from a few spikes, buyers are generally underperforming the S&P 500 on a consistent basis. 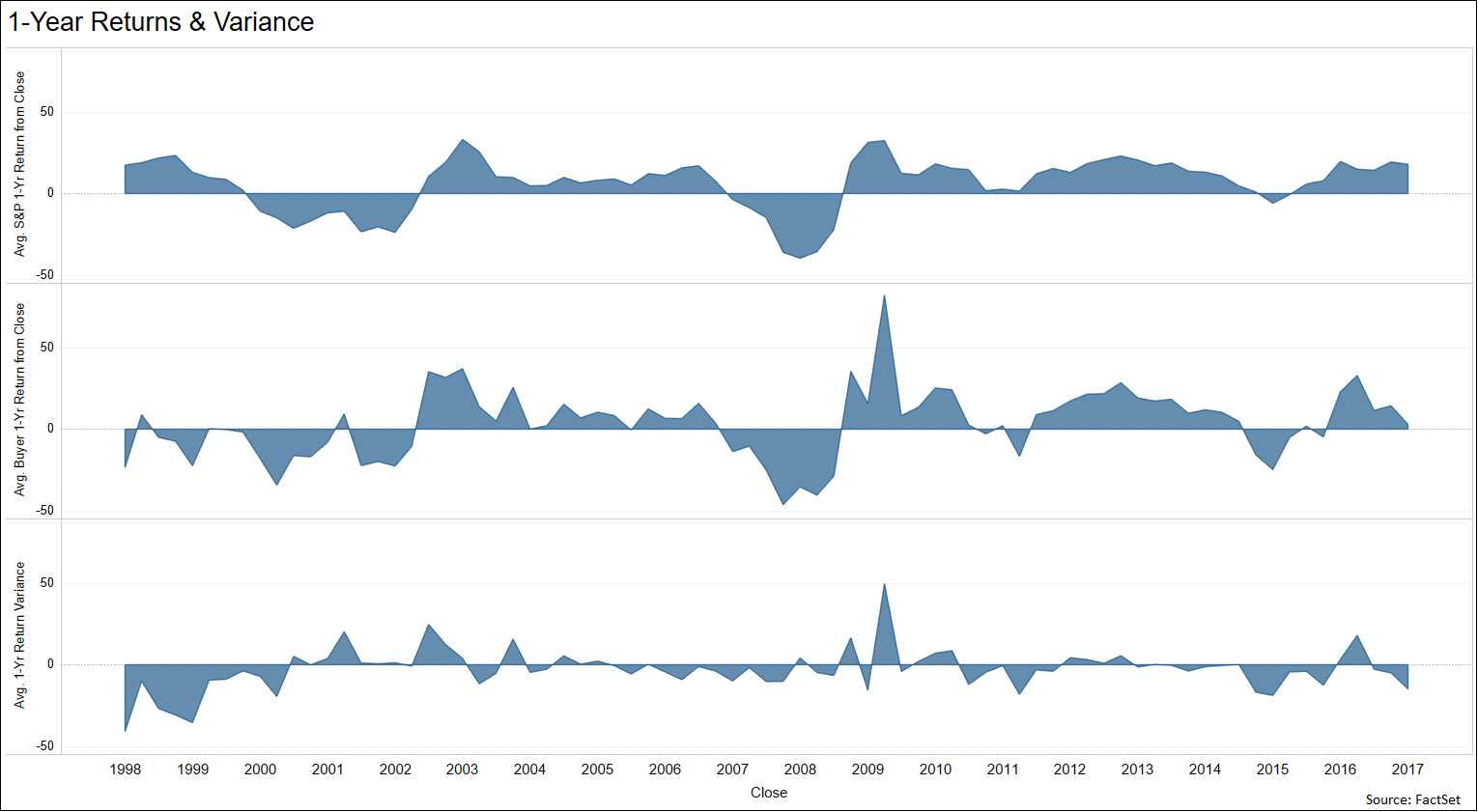 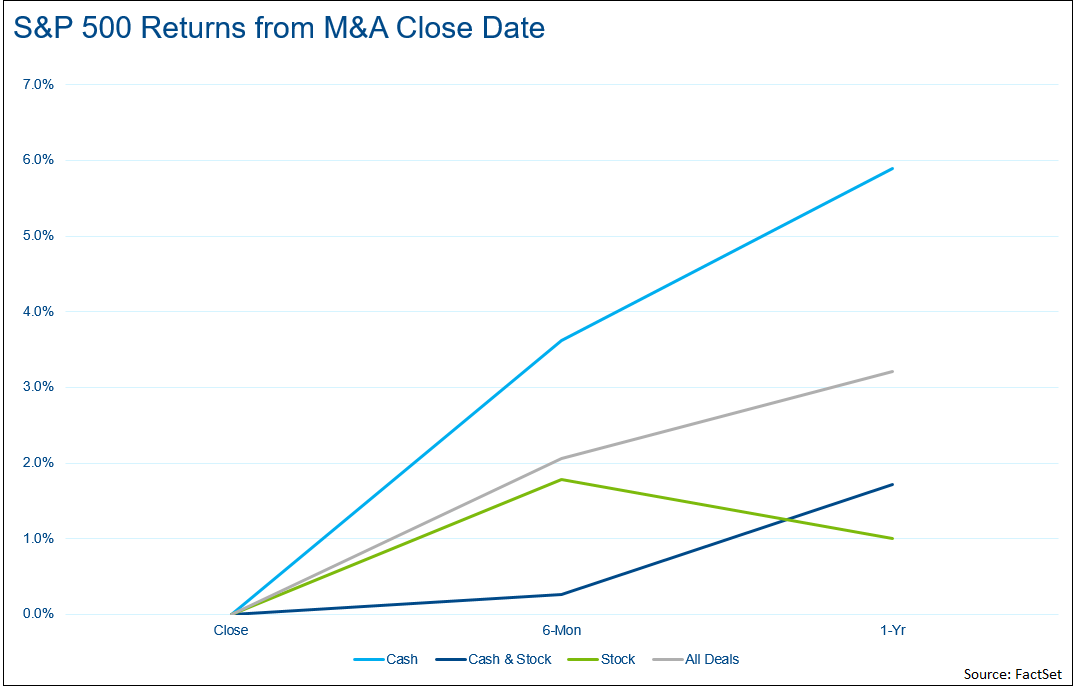 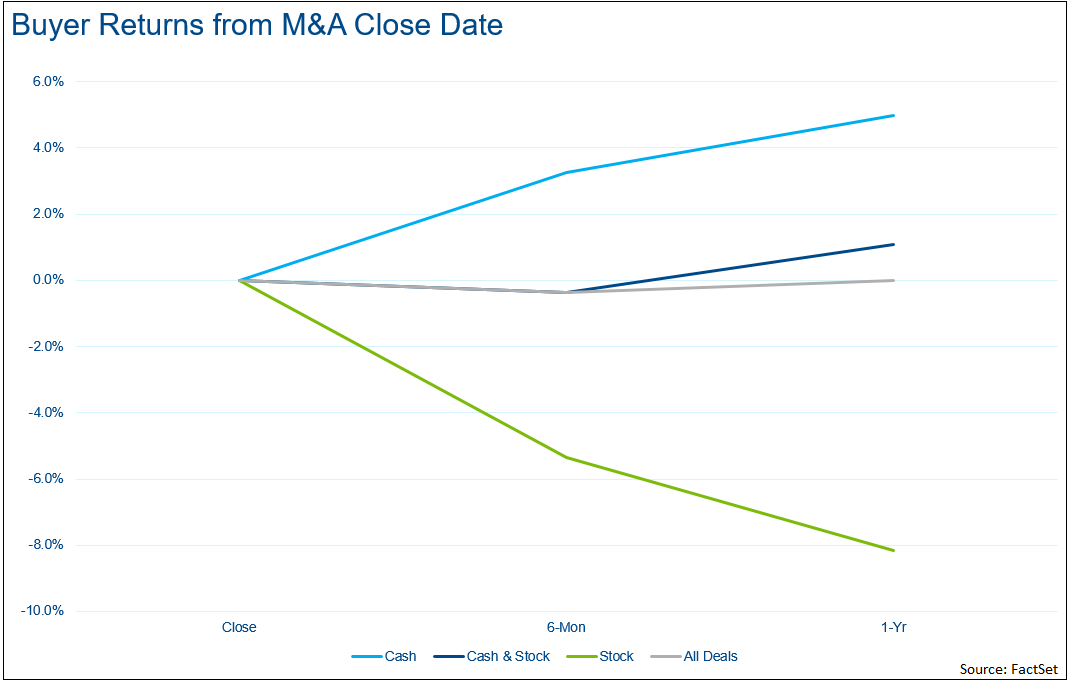 Buyers don't necessarily make large strategic acquisitions to move their share prices, but the acquisitions are generally pitched as a quick way to build a business and gain a competitive advantage. Unfortunately, it does not look like this translates to the market as much as buyers would probably like. Shareholders invested in buyers making large strategic acquisitions may want to rethink positions rather than wait for a “big idea” to materialize in their portfolios.