DOE Hydrogen Hub Program: What States Are Next?

The Office of Clean Energy Demonstrations announced a program to earmark $8B to fund clean hydrogen hub demonstrations across the US as part of the Infrastructure Bill passed late last year. The money is being set aside to establish an estimated six to ten regional clean hydrogen hubs. According to the Department of Energy (DOE) website, eligible projects include those that “demonstrate the production, processing, delivery, storage, and end-use of clean hydrogen.” Recently, a coalition of seven Midwest states (IL, IN, KY, MI, MN, OH, and WI), dubbed the Midwest Hydrogen Coalition (M-H2), announced an intention to get a share of the funding to advance four hydrogen hubs that would reside somewhere within the group’s states. Today’s Energy Market Insight will look at some of the regional dynamics in those states that could make them strong contenders for the program.

While the potential use for hydrogen as a transportation fuel at scale is still up for debate, hydrogen is currently being used in industrial processes across the US today. Hydrogen demand sits at an estimated 10 Mt/y in the US, with 55% used in refining processes and another 35% used in ammonia and methanol production. This means that regions where hydrogen is currently used in ammonia plants and refineries are prime candidates to drop in low carbon hydrogen production in order to kickstart the decarbonization of those industries. Combined with the fact that existing midstream infrastructure could be used, it becomes easy to see how the states in M-H2 are in a good spot to begin building out low carbon hydrogen hubs. The map below highlights this by showing regions where hydrogen is currently being used for ammonia production and in refineries. Major hydrogen producing facilities are also represented here because they offer the opportunity to attach Carbon Capture and Sequestration (CCS) technologies to existing production to create low carbon hydrogen while utilizing existing infrastructure. 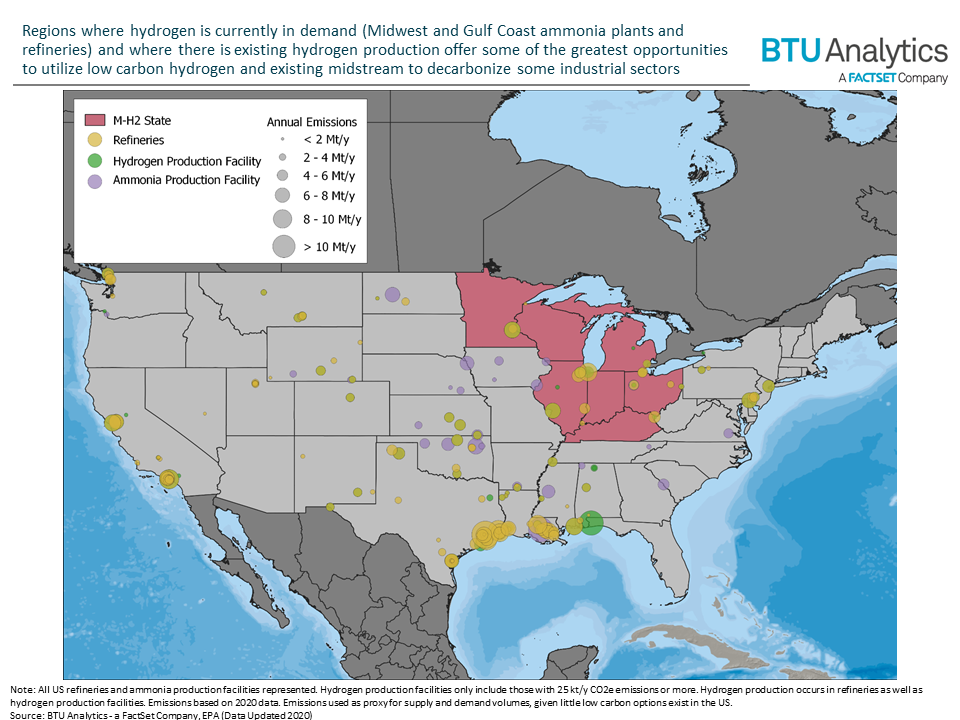 Viewing this data on a map reveals how the Midwest is in a strong position to employ existing infrastructure to create hydrogen hubs. It also highlights how other states, such as Texas, Oklahoma, and even Kansas, have the infrastructure to make them good candidates for the grant money as well.

In addition to having existing production and demand sources for hydrogen, the grant program also falls under the Justice40 Initiative. In short, this is a stipulation that requires at least 40% of the grant money for “clean energy” programs under the Infrastructure Bill, as well as the Inflation Reduction Act and the American Rescue Plan, must go to a Disadvantaged Community (DAC). The DOE defines a DAC as a census tract that meets 36 specific stipulations, some of which are tied to income and employment. Using DOE data, we can add in the DAC census tracts, which helps to highlight another input that may influence where grant money may flow. Note that these DACs are different from the energy communities defined for investment and production tax credits, which BTU Analytics recently wrote about. 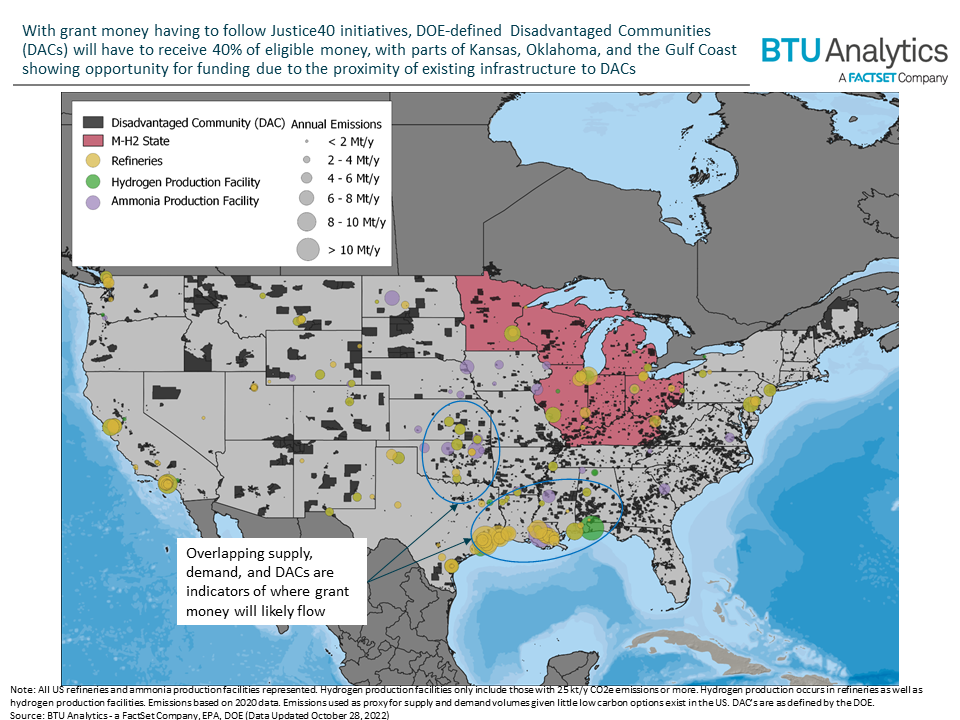 The map above reveals even more that the opportunity to secure funding not only resides in the Midwest but also in eastern parts of Oklahoma and Kansas and even stretches into the Gulf Coast. These other states should also be considered likely candidates to apply for the grant money afforded by the Hydrogen Hub Program.

Hydrogen will certainly play a role in future decarbonization plans, and low carbon hydrogen production is an opportunity to displace around 90 Mt/y in emissions, not including its potential use in power generation or even as a transportation fuel.  Significant hurdles exist for those uses, including a grid that is still far from being decarbonized. However, existing hydrogen infrastructure will make the M-H2 program a viable candidate for the Hydrogen Hub.

Interested in being the first to receive BTU Analytics’ insights, data, and analysis on energy transition infrastructure and opportunities? Email info@btuanalytics.com with the subject line “Energy Transition”. 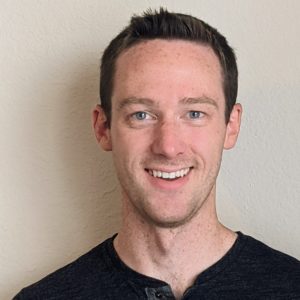