Does Any Upside Remain for Henry Hub Prices in Summer 2022?

Henry Hub forwards pricing has been volatile over the past two weeks. The 2022 summer strip was as high as $5.08/MMBtu last week before shedding $0.80/MMBtu over the next three days. Even after the most recent decline, current strip pricing is the highest it’s been since summer 2014. While a cold end to winter could further deplete storage inventories and provide short-term support, the current outlook for supply and demand this summer poses significant downside risk to Henry Hub pricing.

Despite an ongoing energy crisis in Europe, U.S. liquified natural gas (LNG) facilities are limited in their ability to respond to further global demand for LNG. In January, feedgas deliveries averaged 12.6 Bcf/d and peak daily deliveries capped out at 13.5 Bcf/d. Even with the startup of Venture Global’s Calcasieu Pass facility (1.54 Bcf/d), U.S. LNG demand is likely limited to less than 2.5 Bcf/d of incremental demand assuming Calcasieu Pass capacity comes online in full by the start of summer. That explains why the Biden administration is looking to secure supplies for Europe from other producers if the situation between Russia and Ukraine deteriorates rather than boost U.S. production.

On the other hand, the downside risk for U.S. LNG is considerable. In response to higher U.S. natural gas heating prices, several U.S. congressmen have called for a limit on new U.S. LNG exports. Should those calls grow louder, it could even lead to a limit on existing facilities. Additionally, if tensions ease and Russia can begin flowing meaningful new gas supply on Nord Stream 2, European gas prices could collapse and reduce the arbitrage opportunity between U.S. and European prices, potentially limiting spot export volumes.

Not only will demand growth be limited this summer, but U.S. gas production could be positioned for even more growth in 2022. Despite a focus on capital discipline from major producers, the U.S. added 221 horizontal rigs in 2021 bringing the total horizontal rig count at the end of the year to 530 rigs. Over the last five weeks, operators have continued to add rigs with the total horizontal rig count climbing to 555 rigs. The rise in activity has translated into rebounding dry natural gas production. At the end of 2021, dry production reached 98.1 Bcf/d, just above where it was at the end of 2019 before the pandemic hit.

Recent cold snaps have led to freeze-offs causing production to fall in the near term, but that production is likely to return as the cold temperatures ease. While we will know more about plans for public exploration and production (E&P) companies with the upcoming earnings releases this month, heightened commodity prices for both oil and gas remain strong incentives for production to exceed pre-pandemic levels before this summer.

While the impacts of weather, both for winter heating demand and summer power demand, will have an impact on end-of-season storage inventories, production and LNG are two of the most visible indicators of the potential imbalance in the gas market this summer. Even under a best-case scenario, one that sees LNG run at max utilization while production stagnates at end of 2021 levels, end of summer storage would only be projected to fall to 3.18 Tcf. That’s 432 Bcf lower than in 2020 but is only 14 Bcf lower than at the end of summer 2018 when Henry Hub only averaged $2.91/MMBtu during the summer and averaged $3.33/MMBtu the following winter. While storage inventories are not a perfect indicator of potential pricing strength, fears of severely diminished storage levels are likely overblown. 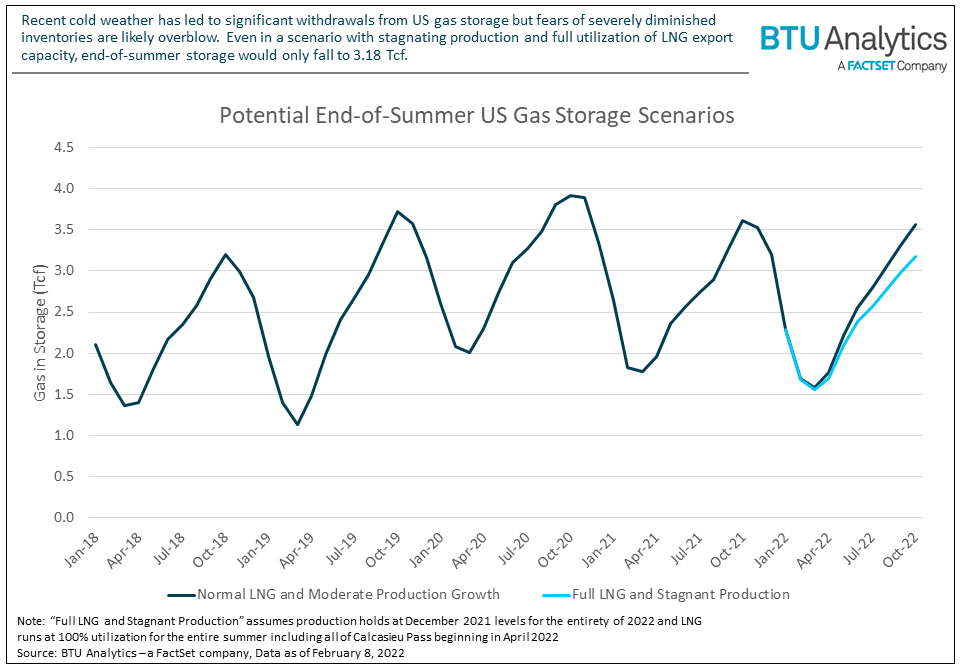