To answer this question, FactSet searched for specific terms related to a number of factors (i.e. “currency,” “China,” etc.) in the conference call transcripts of the 23 S&P 500 companies that have conducted second quarter earnings conference calls through July 7 to see how many companies discussed these factors. FactSet then looked to see if the company cited a negative impact, expressed a negative sentiment (i.e. “volatility,” “uncertainty,” “pressure,” “headwind,” etc.), or discussed clear underperformance in relation to the factor for either the quarter just reported or in guidance for future quarters. The results are shown below. 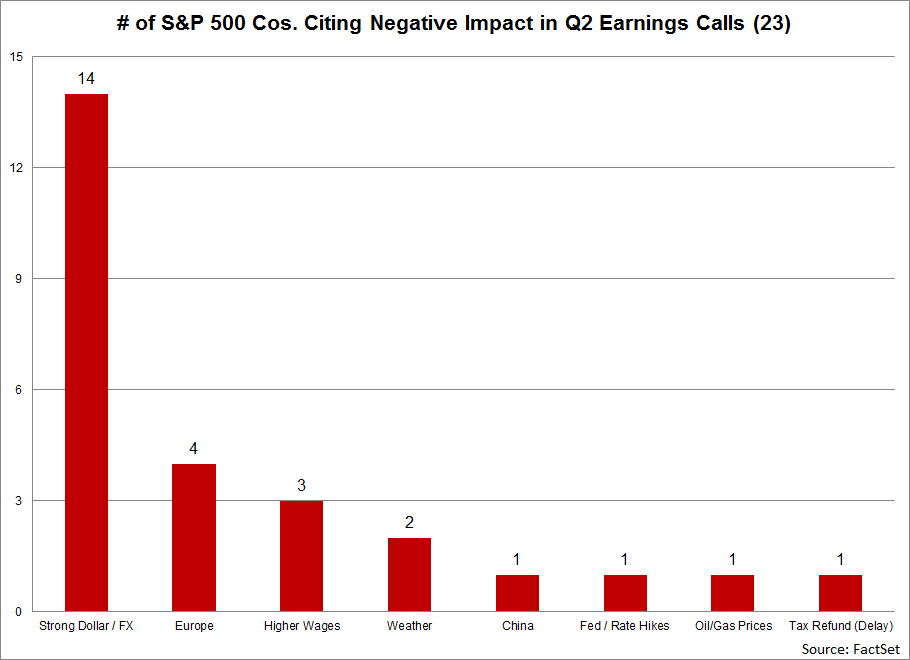 “I think the biggest headwind that we see is really coming from FX in the business. On a year-over-year basis, in Q1, we actually had a bit of a tailwind from FX. But we know that right now, the peso is sitting below MXN 18 to the $1. And we disclosed in the beginning of the year that our guidance was based around MXN 20 to the $1 that presents a pretty significant headwind for us.” –Constellation Brands (June 29)

“I mean our guidance range is $4.05 and $4.13, so it's a rather large range and, as I said before, I mean the A&P spend is broadening out. It might be a couple of million dollars, so it may be up $0.01 a share. So, I don't think we've really moved. FX though, we did move on the top line from 2% to 1%. But at the operating profit line and at the EPS line, we still kept to our last guidance. It's about a 2% impact bottom line. Remember, we have an unconsolidated operation in Mexico, which is driving that with the peso devaluation.” –McCormick & Co. (June 29)

The two FX items, as compared to a year ago during the third quarter, foreign currencies where we operate were mixed relative to the U.S. dollar, from an aggregate weakened versus the U.S. dollar, most notably in Canada, the UK and Mexico, and this resulted in foreign earnings in Q3, when we convert back into U.S. dollars for reporting purposes, being slightly lower by about $5 million, or about $0.01 a share, than if the exchange rates had been flat.” –Costco (May 25)

“As Bill said earlier, we were challenged by difficult foreign exchange rate in regard to the peso. While sales in base currency were above plan this quarter, the devaluation in the peso was much greater than we assumed at the start of the year. This has created a headwind, and our EPS was significantly impacted.” –AutoZone (May 23)

“So now, let's look at the financial highlights for the quarter. As we expected, currency, again, had a negative impact. The U.S. dollar being 12.5% stronger versus sterling than in the comparable quarter last year. Sales for the quarter were $30.1 billion, up 2.1% versus the comparable quarter. On a constant currency basis, sales were up 5%.” –Walgreens Boots Alliance (June 29)

“But underlying transactional, the first half of the year, post-Brexit, you saw what the pound, the euro did that really makes it hard on a year-on-year comparison that first half of the year as our foreign units are buying in U.S. dollars these spices and herbs.” –McCormick & Co. (June 29)

“Number six, FX. The two FX items, as compared to a year ago during the third quarter, foreign currencies where we operate were mixed relative to the U.S. dollar, from an aggregate weakened versus the U.S. dollar, most notably in Canada, the UK and Mexico, and this resulted in foreign earnings in Q3, when we convert back into U.S. dollars for reporting purposes, being slightly lower by about $5 million, or about $0.01 a share, than if the exchange rates had been flat.” –Costco (May 25)

“Freight Q4 results saw revenue quality improving. Year-over-year, Freight's yield growth has improved sequentially as Freight continues to work toward a better balance of volume, pricing, and capacity. Operating results were slightly lower due to higher salaries and wages and increased information technology expenses that offset the benefit from the higher base rates.” –FedEx (June 20)

“This quarter, we reported our second consecutive quarter of challenged sales and profitability performance following 41 quarters of double-digit growth in EPS. Clearly, some of our recent challenges have been macro, like timing of IRS refunds, rising wages and interest rates and peso weakness. But macro challenges and benefits come and go.” –AutoZone (May 23)

“Next, we expect the price of certain LED components to continue to decline, though at a decelerating pace, while certain other costs, including certain components and commodity costs as well as certain employee-related costs, primarily due to further investments in associate head count, wage inflation and healthcare costs will increase somewhat. We expect to mitigate some of the impact of these rising costs through certain pricing initiatives, productivity improvements, and product cost reductions, though the timing of these initiatives might lag the timing of these increased costs.” –Acuity Brands (June 29)

“Expenses increased 5% for the fourth quarter and 6% for the fiscal year. The expense growth in both periods was impacted by higher wages and related expenses due to growth in head count, primarily in our operations areas. Expense growth was moderated by lower variable selling costs.” –Paychex (June 28)

“Okay, so first of all, Sue is saying that payroll was slightly above where we had planned…Yeah, not materially…And again, a lot of it is chasing wage rates.” –Bed, Bath, & Beyond (June 22)

“Generally speaking, in spite of the often noisy political environment, there continues to be a general sense of optimism in the market. There continues to be a perception that jobs are being created across the country and that wages are generally moving positively. The often discussed labor shortage in many sectors of the economy is translating into a sense that many job sectors' compensation is moving up. And while much of the data collected by the government doesn't seem to reflect significant wage growth, the customers visiting our Welcome Home Centers are reflecting an optimistic sentiment.” –Lennar (June 20)

“But I think we do pretty well in trying to drive the things in the right direction, but not touching certain things. We're not going to tweak wages a little bit less or have an increase that's a little bit less.” –Costco (May 25) Given continuing concerns in the market about a possible recession, are analysts lowering EPS estimates more than normal for S&P...

Each week, Earnings Insight offers analysis of critical trends in the S&P 500. The following easy-to-digest infographic...

At this late stage of the Q3 earnings season for the S&P/TSX Composite, the number of companies reporting a positive earnings...