The spread of the COVID-19 novel coronavirus around the world has been fast and dramatic. With the global death toll now over 17,000 and still rising, the effect it has had on the economy and the public is devastating. A global recession now appears unavoidable. For those of us who have witnessed a few recessions in our lifetime, the speed at which this is happening is unprecedented. In many ways, we are seeing the same events as with any recession, but the time frame in which they are occurring is significantly condensed.

Global equity markets were the first signal of what was to come. After reaching record highs in February, the S&P 500 is now down nearly 31% for the year having fallen to its lowest level since late 2016 in just a matter of weeks. The impact is even worse in other countries as shown in the table below. The other big market story is plummeting oil prices. The price of WTI crude oil recently traded at an 18-year low due to a combination of supply and demand shocks; in-fighting among producers is leading some countries to ramp up production while lower demand from China as a result of the coronavirus is expected to hurt global demand.

In terms of what will happen with the U.S. economy, we can see the slowdown happening in real time. However, due to the lag in official economic statistics, our ability to measure the economic impact is delayed. We’re just receiving February data now, and everything was still relatively rosy then. What a difference three weeks make. In an effort to grasp the impact on the U.S. economy, let’s step back and consider what data we currently have and what is still coming in.

After real-time market pricing data, survey data is generally the first economic data to signal turning points. Both the NY Fed’s Empire State Manufacturing Index and the Philadelphia Fed’s Manufacturing Business Outlook Survey saw their largest monthly declines ever in March. The NY index fell from 12.9 in February to -21.5 in March, its lowest reading since 2009. Meanwhile, the Philadelphia index plummeted from 36.7 in February to -12.7 in March, a nearly nine-year low. 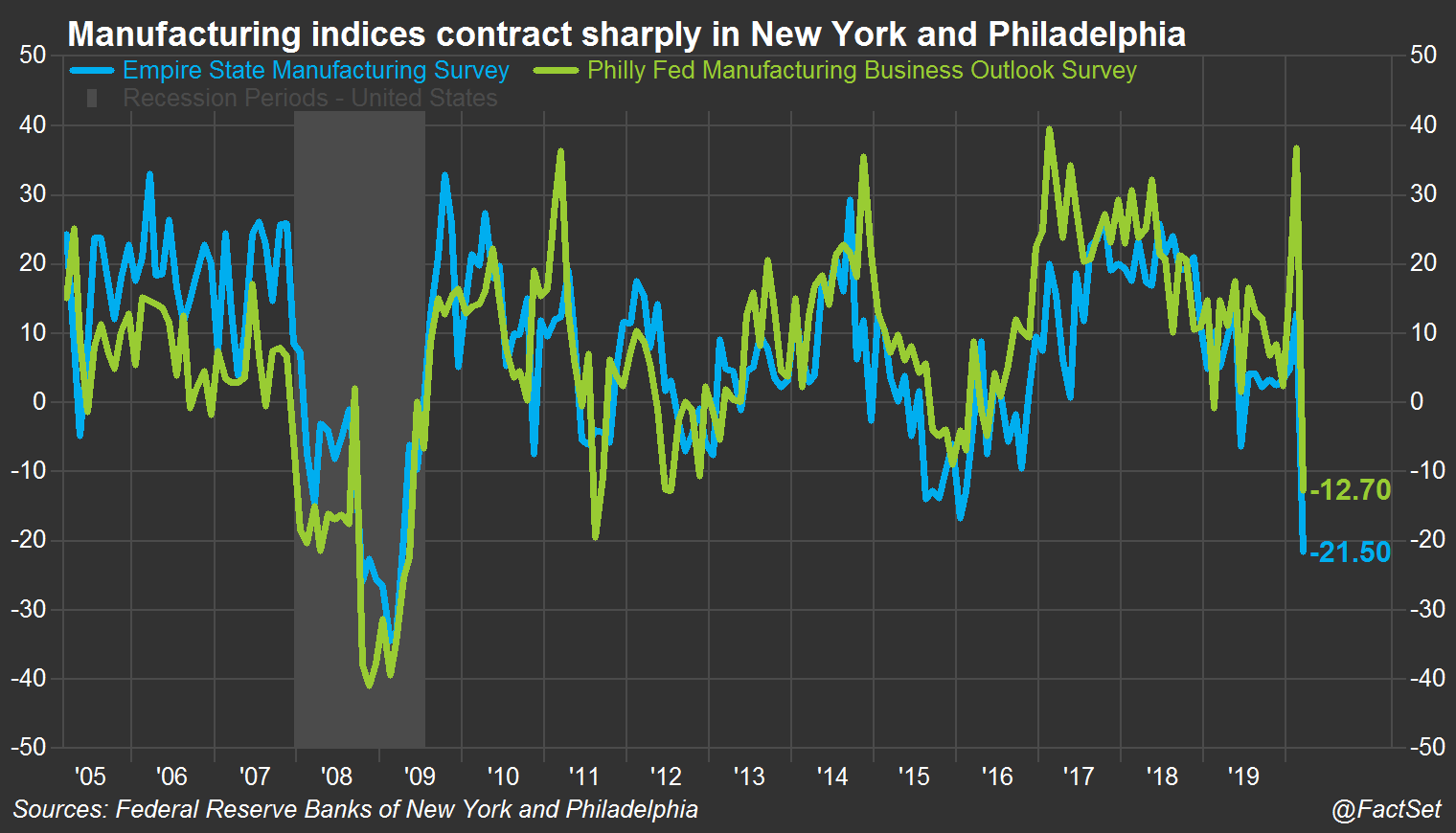 On the consumer front, the only current data we have is the University of Michigan (UoM) preliminary consumer sentiment index. This snapshot was taken in mid-March, right before we saw a dramatic shift in local and national reactions to the coronavirus outbreak. The index showed a 5% drop from February, falling from 101.0 to 95.9. We’ll get the final March numbers from the UoM and the Conference Board’s consumer confidence index in the coming days. Those reports are likely to show sharp dips in response to the plummeting stock market and increasing consumer nervousness due to the COVID-19 pandemic.

We had our first glimpse of the impact on employment with the latest data on weekly unemployment insurance claims. For the week ending March 14, U.S. jobless claims jumped by 70,000 to 281,000, the highest number since September 2017 when Hurricane Harvey ravaged Texas. The consensus estimate of analysts surveyed by FactSet projects claims will soar to 725,000 for the week ending March 21. We’re likely to see continued increases in the number of claims leading up to the March monthly U.S. employment numbers on April 3. In the 2008-2009 recession, initial claims peaked at 665,000 and the unemployment rate went to 10.0%. 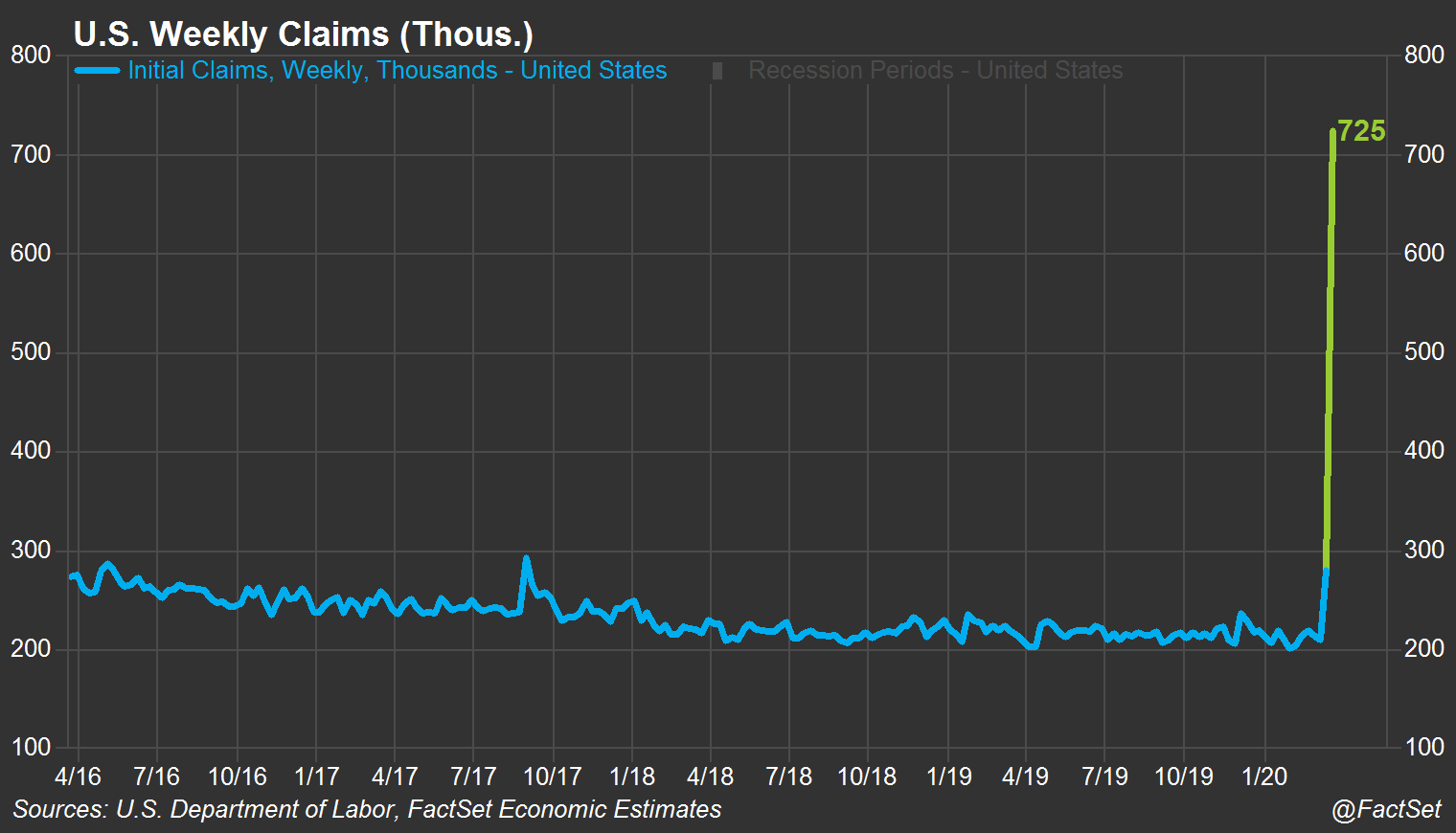 Employment in services will be especially hard hit. The U.S. has a service-based economy with services representing nearly two-thirds of consumption. With millions of Americans under mandated/voluntary quarantines and staying home, a significant number of the country’s 108 million private service-producing jobs are at risk. The exceptions will be in health care, trucking, couriers, and warehousing as Americans increasingly require medical care and deliveries of food and supplies. Note that more than eight million jobs were lost during the last recession. 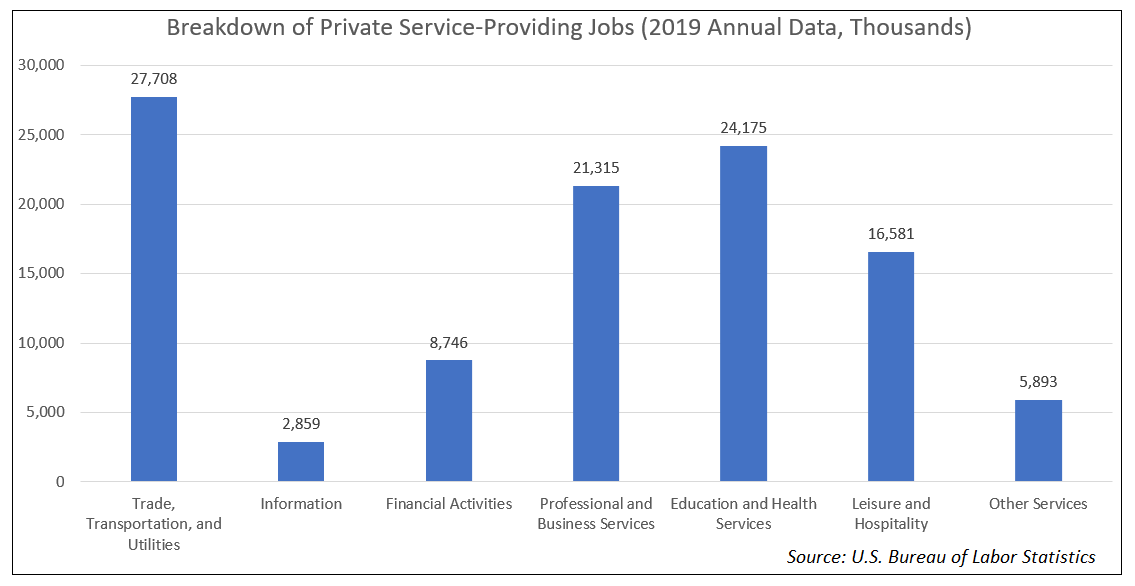 On the manufacturing side, automakers GM, Ford, Fiat Chrysler, Honda, Nissan, and Toyota have all announced that they are idling their North American factories to protect their workers from the coronavirus. According to the U.S. Bureau of Labor Statistics, approximately one million people are employed in automobile and auto parts manufacturing in the United States and 1.3 million work for auto dealers. The U.S. manufacturing sector was just starting to appear like it was emerging from its industrial recession; idle factories and reduced demand for many goods will hit the industrial sector hard.

Consumer spending represents two-thirds of total GDP. Unfortunately, things aren’t looking good for the consumer right now. February retail sales disappointed; total retail sales fell 0.5% for the month following a 0.6% gain in January. The biggest declines were at gasoline stations, motor vehicle and parts dealers, and furniture, furnishings, electronics, and appliance retailers. These numbers are likely to get worse in the coming months.

When trying to estimate the impact on consumption from this pandemic, it’s helpful to look at annual data from the 2008-2009 recession. In 2009, nominal goods consumption fell by 5.4%, led by sharp declines in furnishings and household equipment (-9.9%) and recreational goods and vehicles (-9.3%). We’re likely to see a similar trend today as consumers cut back on nonessentials; the exception may be food and beverages for off-premises consumption. With many states and localities advising—and in some cases, mandating—people to stay at home, spending in this category is likely to be strong.

While goods consumption fell in 2009, we saw a 0.7% increase in spending on household services. Things will likely be drastically different with this slowdown. In 2009, we saw declines in financial services and insurance (-6.0%), as well as transportation services (-4.9%). In 2020, with dining out and travel largely curtailed, we’re likely to see a much steeper decline in spending on food services and accommodations than in 2009, when spending in this category fell just 1.2%.

The sharp decline in oil prices will depress nominal energy consumption, the majority of which is for motor vehicle fuels. In addition, with millions of Americans staying home, these expenditures are likely to decline sharply in real terms. Energy goods represent just 3.3% of total consumption but on top of sharp pullbacks in purchases of nonessentials (e.g., clothing and footwear, durable goods such as cars, furniture, and recreational goods) and many services, we can expect to see acute declines in the consumption data for March and likely all of Q2 2020.

Never has the description of economics as the “dismal science” seemed more appropriate. As events rapidly unfold, not just here in the U.S. but around the world, economists are scrambling to adjust their models and forecasts to explain where we’re heading. This author’s opinion is that the U.S. economy is headed for a recession, probably with a start date of March 2020. While this recession will be deep and painful, hopefully it will be short-lived and economies around the world will be back on a positive track in 2021.