The Confusing World of ETF Premiums and Discounts

ETF premium/discount charts like the one for iShares Edge MSCI EAFE ETF (EFA-US) below often make ETF investors nervous, because they imply that it’s more likely than not that customers will be hit with a significant premium or discount when buying or selling an ETF. That’s a pity, because most of the time, that implication is just not true.

ETFs like EFA trade very close to their instantaneous fair value. EFA trades $1.38 billion/day, at an average daily spread of 0.01%. EFA’s arbitrage mechanism works, since market makers can buy and sell its portfolio of developed market securities with little difficulty.

EFA’s strong volumes and tight spread make it clear that multiple arbitrageurs compete for order flow. The twin forces of the profit motive and competition keep EFA’s bids and offers in line with its portfolio value. This is confirmed by EFA’s one-year median premium of 0.06%, largely attributable to its 0.04% creation fee.

But the median premium isn’t the whole story. Investors’ apprehension comes not from the central tendency (the red trendline in the chart), but from the wild swings around it. Did EFA really close at a 3.14% discount on February 5, 2018, only to bounce to a 2.03% premium the next day?

While EFA’s end-of-day NAV was out of line with its closing market price, EFA was still trading in line with its portfolio value. EFA’s premium/discount variability is just a statistical artifact.

The existing solution, intra-day NAV (iNAV), is actually only a half-measure. iNAV updates every 15 seconds, with real time currency translations, but it makes no adjustment for any updated security valuations. Stocks like Nestle, Novartis, and HSBC, EFA’s top holdings, keep trading long after European markets close, as illustrated by this 12:48 p.m. ET (9:48 a.m. PT) quotes montage (which incorporates a 15-minute delay) for Nestle.

You can be sure that market makers who post bids and offers in EFA are using up-to-the-minute security prices, not stale official closing prices, to calculate EFA’s value. Because of this, a premium/discount chart based on iNAV will be less wrong than the EFA chart above, but it won’t be right.

For funds whose NAVs are not synchronized with U.S. equity market closing times, phantom premium/discounts like the ones in EFA are the norm. That’s why ETF.com’s Dave Nadig suggested that the SEC require ETF issuers to flag or footnote premium/discount results for funds with “exchange hours overlap issues.”

There are three kinds of issues that can skew premium/discount results: NAV synchronization, security valuation practices, and illiquidity. Let’s look at each one in turn.

In addition to foreign equity funds, ETFs that hold fixed income, futures, physical precious metals, or cash in a non-native currency strike their NAVs at some time prior to the U.S. equity market close. While the ETF will trade at real-time valuations during the whole trading day, its NAV will not update.

The scatter plot below shows the distribution of premium/discount values for TLT, iShares 20+ Year Treasury Bond ETF. While the average premium is close to 0.00%, the range is significant. This happens because after-hours moves in the price of long-dated treasury bonds can be significant if interest rate expectations shift between 3:00 and 4:00 p.m. ET. 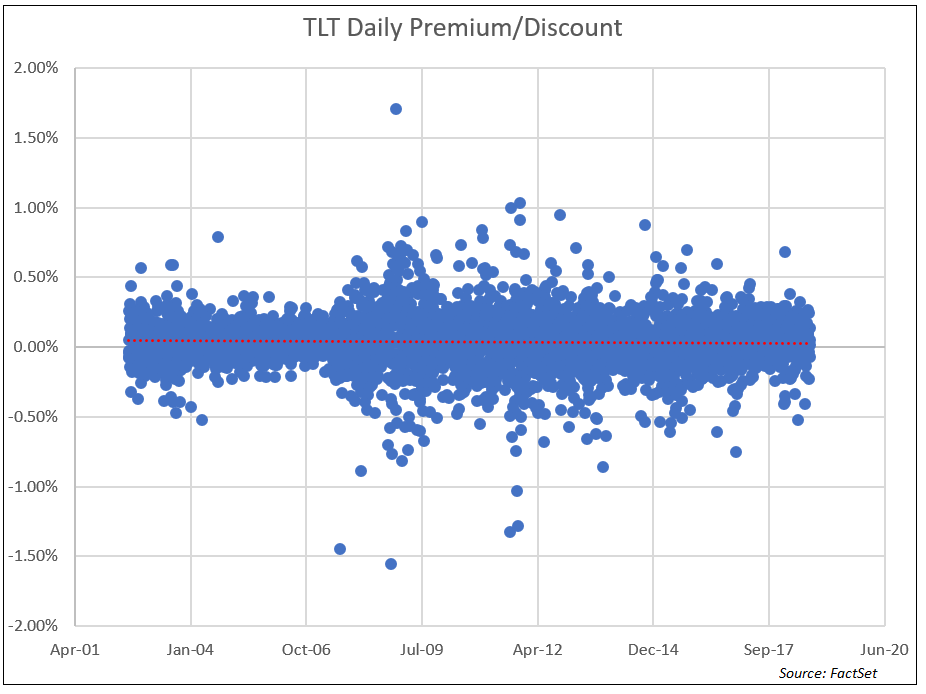 The same thing happens with precious metals such as gold. While gold trades around-the-clock, GLD’s NAV is set using the 4 p.m. GMT price of gold. GLD’s NAV’s early strike time is out of synch with the US market close, producing and end-of-day chart that suggests that customers cannot count on fair execution in GLD. 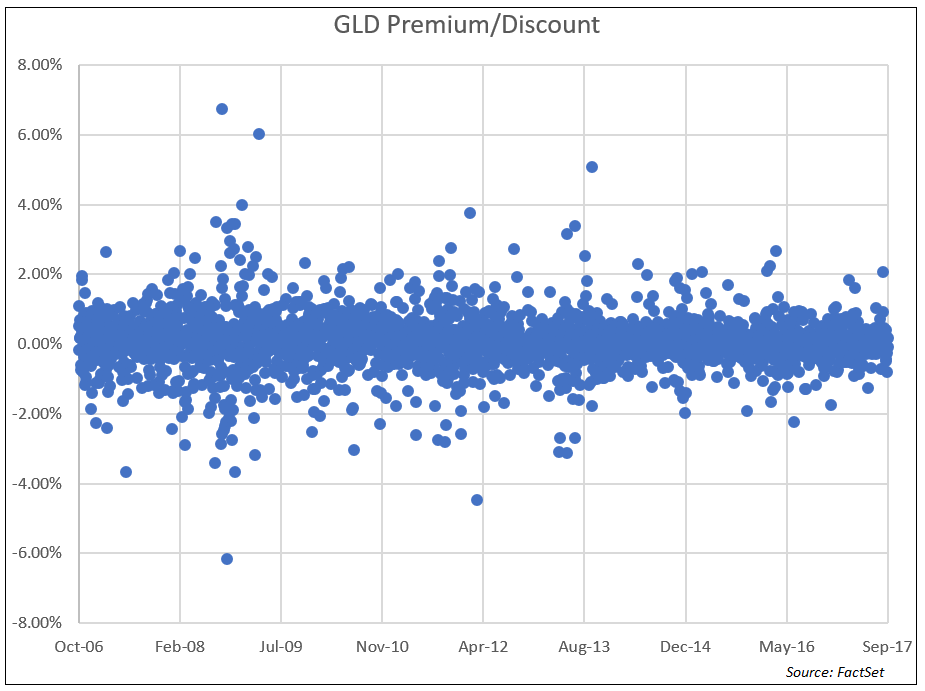 Similar effects happen for funds which hold futures, which record an official settlement price at 2:30 p.m. ET, and for physically-held currencies, which, as with EFA, have their exchange rates – and therefore their entire valuation – set at 10 a.m. ET.

There’s another aspect of bond ETF valuation that can produce phantom premiums or discounts. Sometimes, bond fund NAVs are calculated using the closing (or modeled) bid rather than the last traded price. That can depress NAV values relative to trading prices, especially if strong market interest tends to promote price discovery.

HYG is a good example. As shown in the chart below, HYG seems to be trading at a persistent premium of approximately 0.25%.

Yet HYG’s liquidity is exceptionally strong and balanced between buyers and sellers. Even though HYG’s portfolio of high-yield bonds is not easy to arbitrage, HYG nevertheless sees creations or redemptions on a daily basis, evidence that the arbitrage mechanism works. With HYG’s huge volumes, an unwarranted premium should not last for even a minute, and certainly not for half a decade.

HYG’s persistent 0.25% premium is created not by mispricing, but by the way that its NAV is calculated. HYG’s NAV uses a pricing input that reflects the bid price of a bond, not the last traded or estimated mid-price. Of course, bids are lower than the mid-price, so HYG’s NAV becomes systematically lower than its market price.

HYG is also the poster child for another type of NAV accounting issue having to do with how bond prices update. NAV accountants use inputs from bond pricing services, while HYG’s price is based on real-time market activity.

Most bonds are illiquid, often trading maybe once a week or once a month. This is especially true in the high yield market. Yet accountants need daily valuations in order to calculate NAVs. They turn to bond pricing services, which employ models to estimate a bond’s daily price based on recent trades in similar bonds. These models are only as timely as their inputs, so if their sentinel bonds don’t trade, the models won’t update. This becomes an issue when there is a dislocation in bond markets, as many bonds don’t trade in the minutes, hours, or days following an interest rate or credit shock. Bond pricing models may not catch up to new market conditions for a few days following a shock.

ETFs like HYG trade on equity exchanges and have live bids and offers during equity market hours. High volumes, along with tight spreads and good depth-of-book, mean that HYG’s buyers and sellers generate real-time information about HYG’s prices. In effect, funds like HYG often act as price discovery vehicles. While HYG’s price is often the best estimate of its portfolio value, NAV can take days to catch up.

This played out dramatically during the U.S. credit downgrade crisis in August 2011. HYG seemed to trade at a 2% to 3.5% discount between August 4 and 8, as S&P downgraded the U.S. credit rating from AAA to AA+ on August 5. Subsequently, HYG seemed to develop a premium on August 9, when the Fed announced plans to keep interest rates low through 2013.

HYG’s market price initially responded by dipping below calculated NAV, followed by an overshoot on the upside. Yet, as shown in the chart below, NAV was slow to update, as HYG’s price was the more reactive, or volatile, of the two series. HYG’s NAV lag was most dramatic on August 9, as NAV continued to adjust downward while price reversed. NAV caught up on August 12. 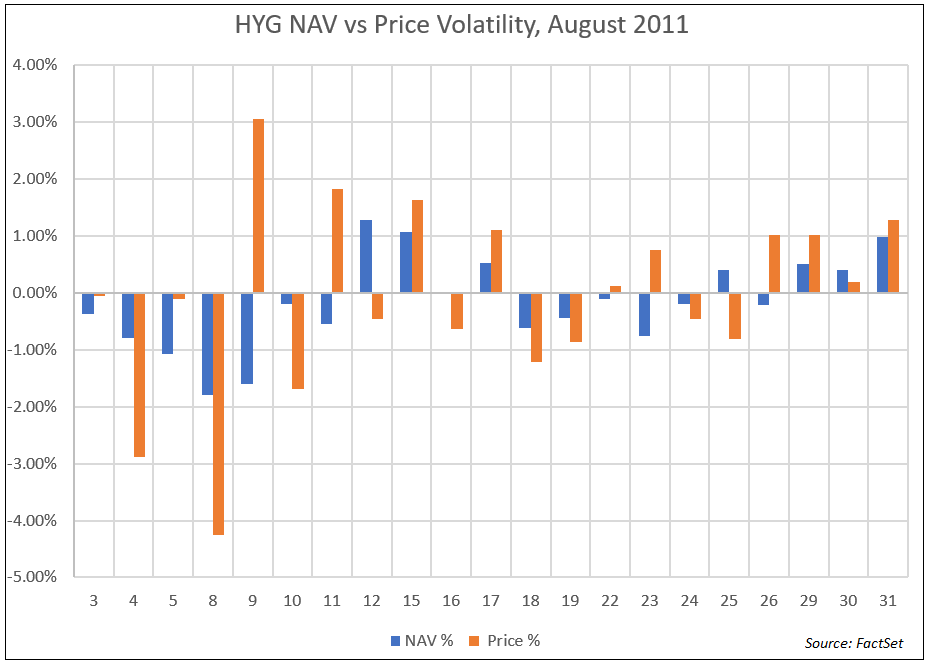 There were countless articles written about HYG’s apparent market malfunction. Yet HYG maintained excellent liquidity throughout the downgrade crisis. The real culprit was slow-to-update bond models that could not keep pace with real-time pricing. This can make for some unfortunate and unnecessary panic about premiums and discounts.

There’s one other way in which end-of-day premiums and discounts can appear extreme, despite a functioning arbitrage mechanism. This occurs even if NAVs are struck at 4 p.m. ET, with no synchronization issues – that is, in cases where iNAVs reflect intra-day values.  It’s all about the timing of the last trade in the ETF. If the last print in the ETF happens many hours before 4 p.m., the ETF NAV and last price can drift apart. That’s exactly what happened with VETS-US. 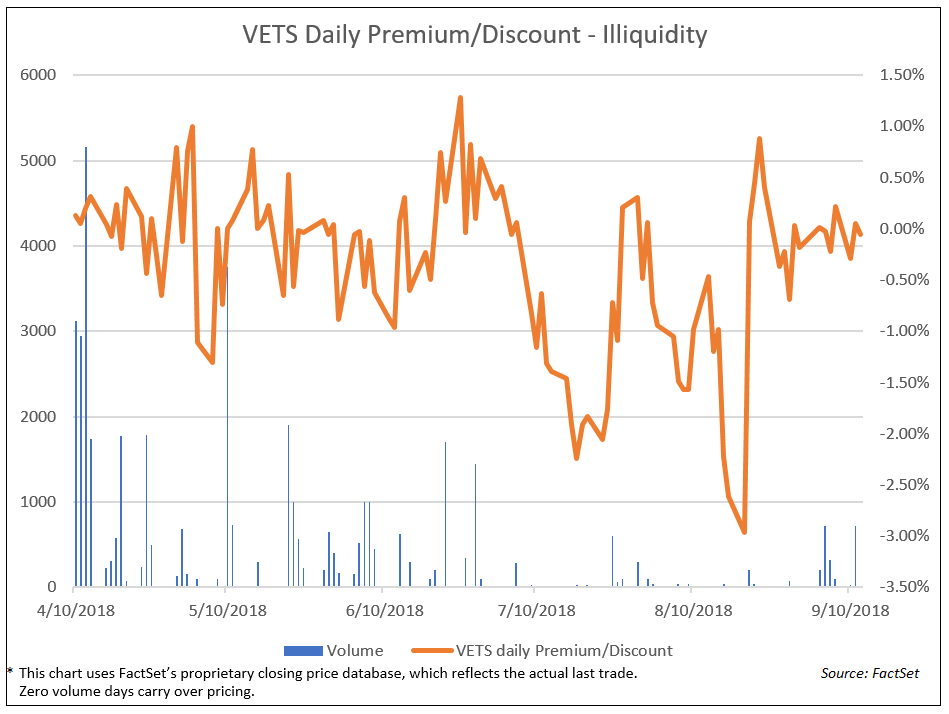 VETS’ premiums and discounts look huge but seem to narrow on high volume days. On May 10, when VETS traded 3,750 shares, its closing premium/discount was 0.00%.

Between NAV synchronization issues, NAV valuation discrepancies, and trade timing mismatches, there are many cases where iNAV and end-of-day premium/discounts tell a misleading story. It’s easy to see why Nadig and other industry participants are eager to dispense with iNAV, and to flag problematic premium/discount results.

We have compiled the most popular search themes on FactSet over the last 90 days, along with the top U.S. sectors associated with...