European Private Equity – Who Has the Money, and Where is it Going?

Whether you are a private investor, sell-side analyst, or portfolio manager, no one is unaffected by the booming private equity (PE) sector. With PE firms popping up across the globe, we are seeing more money, investments, and transactions taking place in this investment class. With more than $335 billion (estimated dry powder* according to Preqin) available from 5,031 European PE firms, we wanted to take an in-depth look at the current situation in Europe and analyze the current trends.

In the chart below, we can see the current number of investors, aggregated AUM in USD, and estimated dry powder based on PE firm location across the seven largest European countries. We also include the estimated percentage of dry powder currently available in each country. The UK has by far the biggest investor base with 1,060 different firms representing over 20% of the firms in the European region and $967 billion in AUM representing 52% of the European total. Sweden and the Netherlands have slightly more dry powder available percentage-wise compared to the other countries, while Switzerland has much more AUM spread across a small number of firms. We would expect to see increased buy-side transactions from Sweden and the Netherlands compared to the other countries. 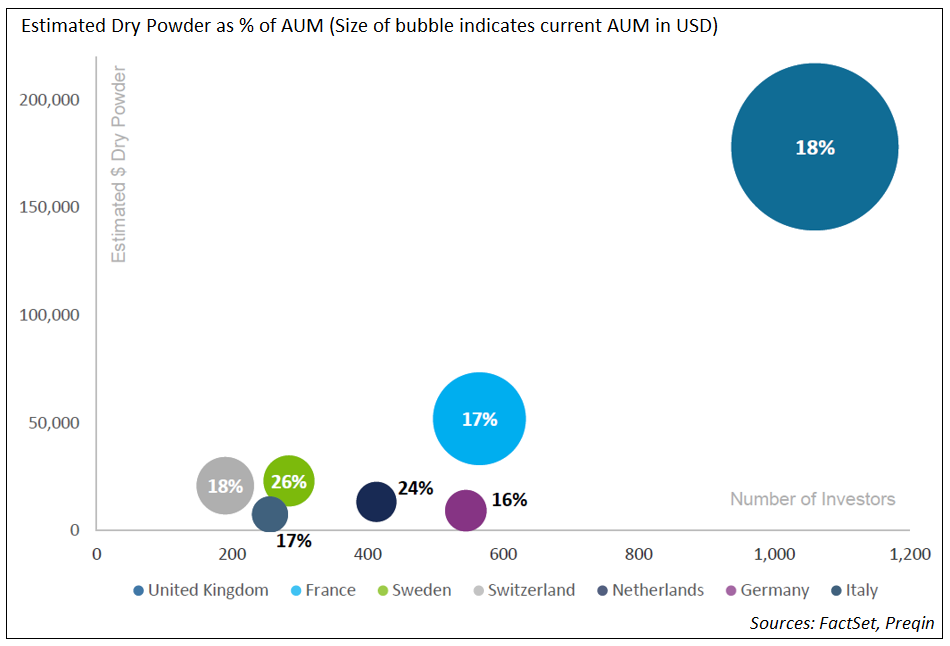 PE firms continue to raise more capital in more funds, seeing an increased number of fund openings from the low point of 2009 until the peak of 2017, with buyout and later stage being the driving fund types. 2017 really stands out with close to $250 billion raised, mainly focused on buyout and later stage investments. 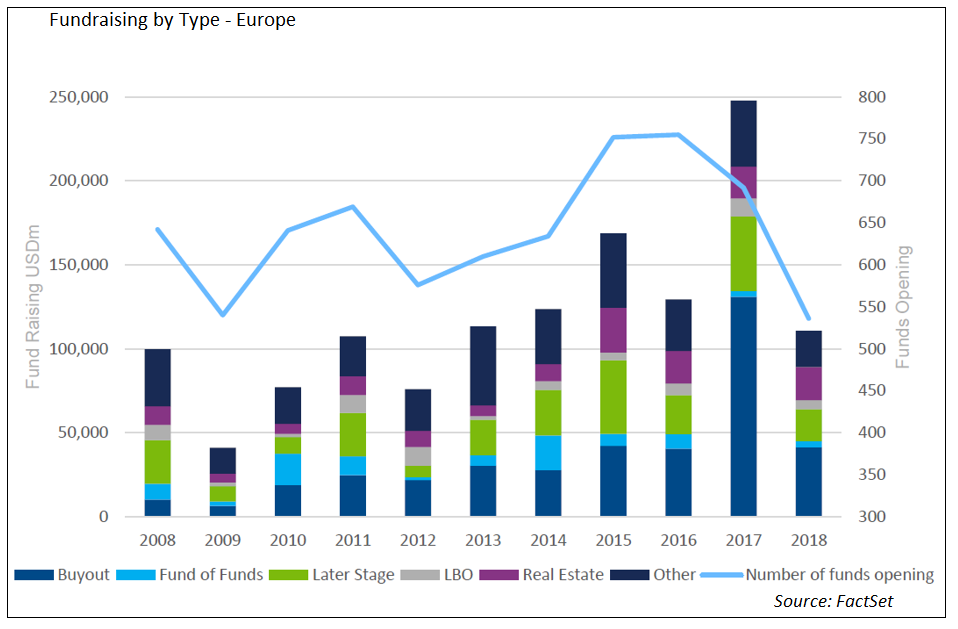 When looking at where investments from European PE firms take place, the standout country is France. 9,300 transactions into French portfolio companies have taken place since 2008, representing over 20% of all transactions; this despite the fact that the available French PE firms AUM only represents one-third of that of the UK. A considerable amount of investment has also been made into the United States, with just under 3,500 transactions targeting American companies. The UK and Germany also represent a large part of the investment universe, with each representing over 10% of the total number of transactions.

The overwhelming majority of transactions being made by European PE firms since 2008 have been in the Technology Services sector—a real standout compared to any other sector both in terms of entries and exit transactions. However, the most interesting data point is that there is a lot more investment than divestment taking place. Since 2008, 46,055 investments have taken place while only 24,589 divestments have occurred. None of the top 10 sectors has had more divestment than investment, clearly showing that we will be seeing a lot more exits take place in the years ahead and that the industry will be ramping up both the acquisitions and divestments within their funds. 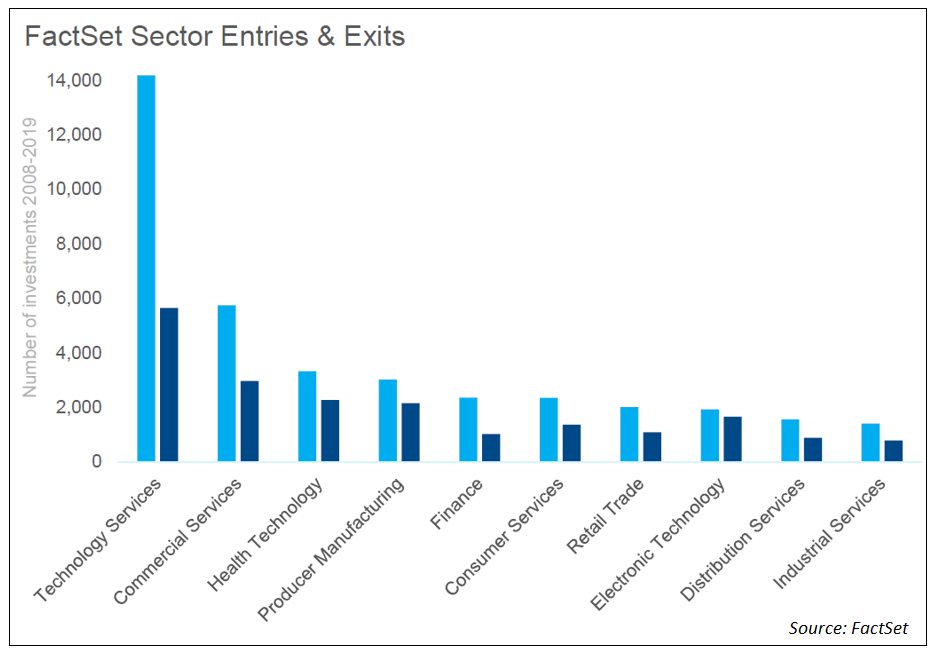 The main investor strategies applied from European investors are seed and early stage, and since we are looking at volume total rather than the aggregated sum of investments, this is the logical outcome. However, we are seeing very clear growth since 2008 with the different entry strategies all growing at a similar pace. There were slightly fewer transactions in 2017 and 2018 following the record year of 2016. 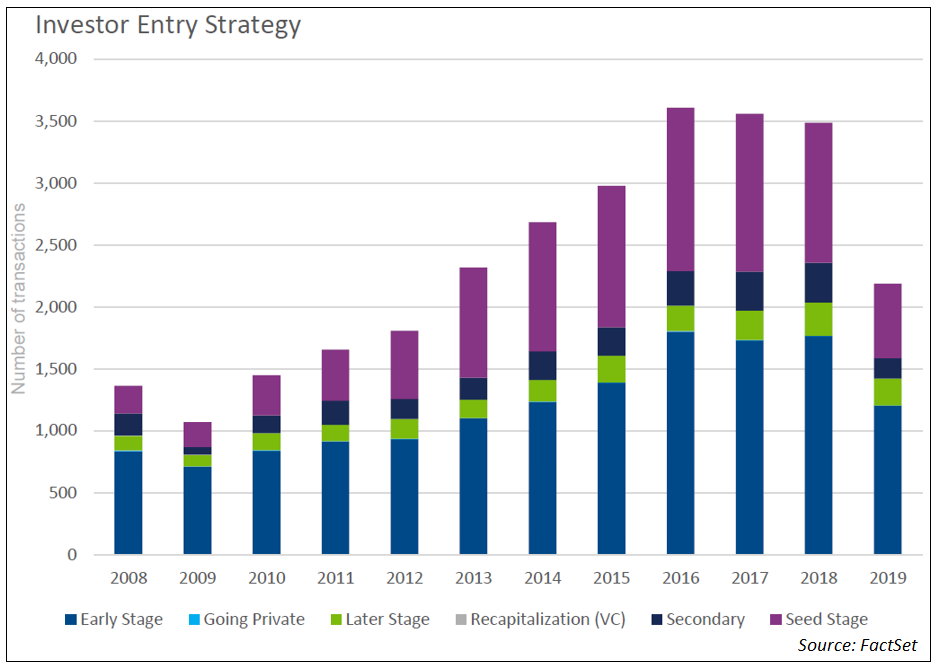 We see the same growth trend when we look at the exit strategies, with most transactions being private trade sales followed by secondaries and public trade sales. The number of bankruptcies has declined significantly from the mid-2010s while the number of IPOs has remained pretty stable. 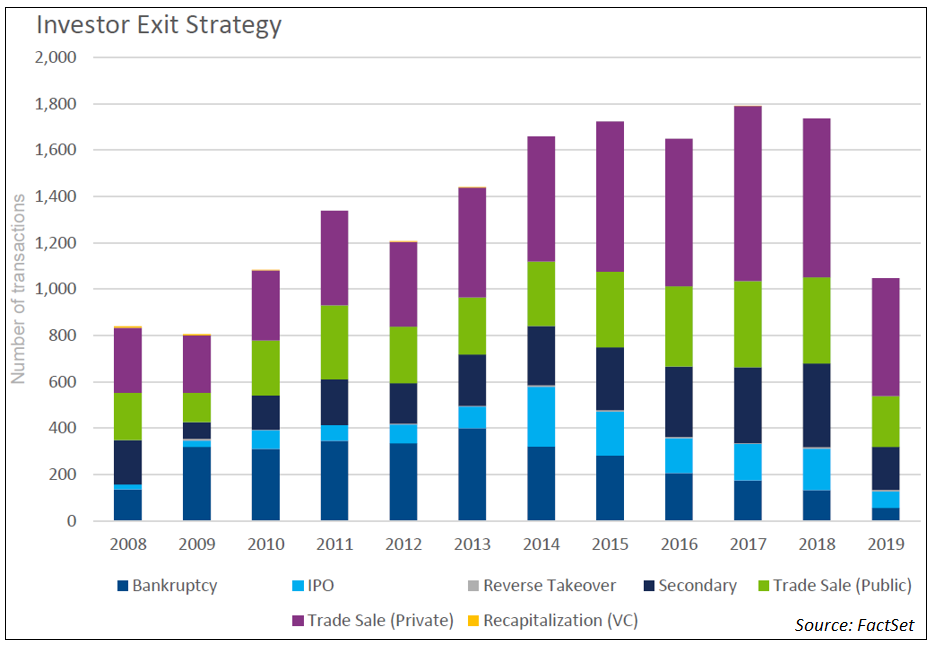 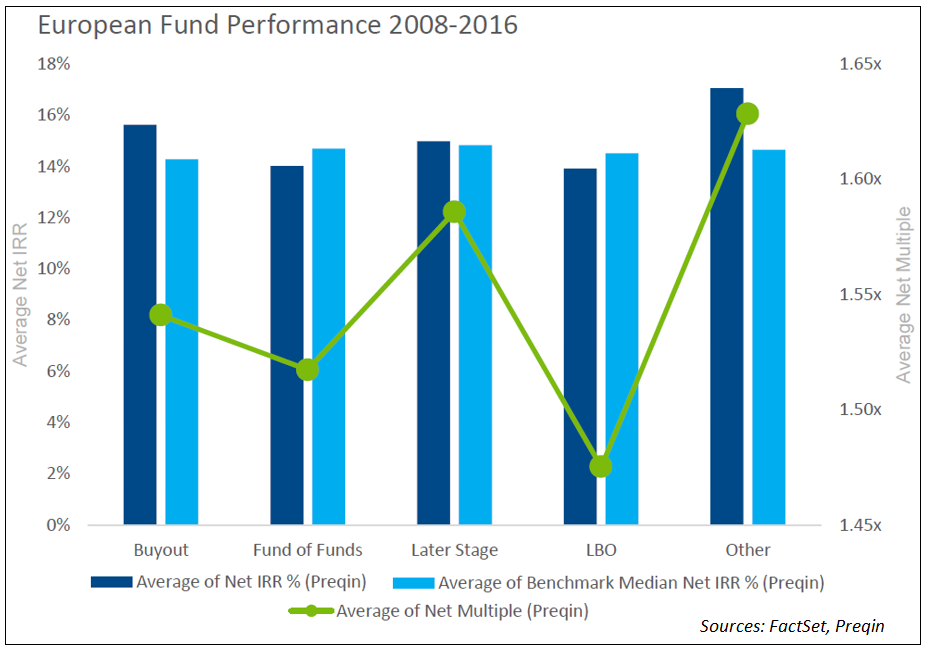 With a growing number of firms raising funds, reaching a record $247 billion in 2017, and with over $335 billion in dry powder currently sitting on the sidelines ready to be invested, everything points to increased activity from European PE firms going forward. The number of new investments made in the last three years shows no lack in appetite for the PE firms finding suitable investment opportunities.

*Dry powder refers to the amount of cash reserves or liquid assets that private equity firms have on hand to make investments. 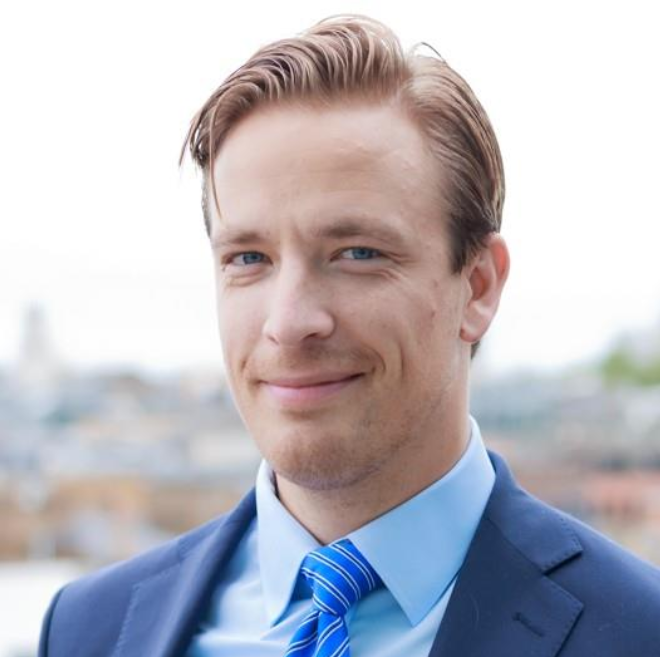 Torstein joined FactSet in 2017 and is based in London.