In a globalized world, international trade is generally defined by the most efficient connections between supply and demand; those relationships can be slow to change. However, there have been several singular events in the energy industry over the last hundred years that have forced a rapid shift in market dynamics accompanied by significant pricing volatility. As a result of the Russia-Ukraine conflict and the steps governments are taking to isolate the Russian government and economy, we appear to be witnessing one of those events.

While each flashpoint has its own unique characteristics, past events can certainly inform how the next several years may unfold as global trade rebalances. Here, we focus on the impacts of the 1973 oil embargo on U.S. energy security and how those lessons can (or can’t) be applied to the current energy dependence that Europe has on Russian natural gas.

Lasting Impacts of the 1973 Oil Embargo on the United States

The 1973 oil embargo began in October following the United States’ deployment of $2.2 billion in arms to Israel during the Yom Kippur War, days after President Nixon had assured Saudi Arabia that the U.S. would promote a "peaceful, just, and honorable" end to the war. Oil shipments to the U.S. and several allies were halted by Arab states except for Iraq and Libya, and the group cut its production by 25% from September to December 1973. The embargo ended in March 1974 following a weapons sales agreement between the U.S. and Saudi Arabia, but the prior six months had already wreaked havoc on the global economy.

These geopolitical events coincided with the end of the Bretton Woods system, under which the U.S. and other major nations pegged their currencies to the price of gold. The move to floating exchange rates in the early 1970s led to a devaluation of the U.S. dollar; since the price of oil is quoted in U.S. dollar terms, this reduced OPEC’s oil revenues. In response, OPEC began pricing its oil in terms of gold; with gold prices surging from the Bretton Woods peg of $35 per ounce to nearly $100 by the end of 1973, this led to surging U.S. energy prices and overall inflation.

While the embargo ended in 1974, its impact would persist. U.S. imports of OPEC oil surged in the five years following the embargo as U.S.-Saudi relations improved. However, oil prices had quadrupled by 1974, and the 1979 Iranian Revolution further exacerbated this price increase. This made oil exploration more economical and, combined with a focus on energy security, resulted in production increases in Alaska and, to a much lesser extent, the Gulf of Mexico and Canada.

The chart below shows how the U.S. reliance on foreign oil dissipated into the mid-1980s. However, rising oil prices also prompted increased production in Saudi Arabia, Russia, the North Sea, and the Caucasus. The resulting oversupply cratered oil prices and the U.S. slowly increased its reliance on imports once again. 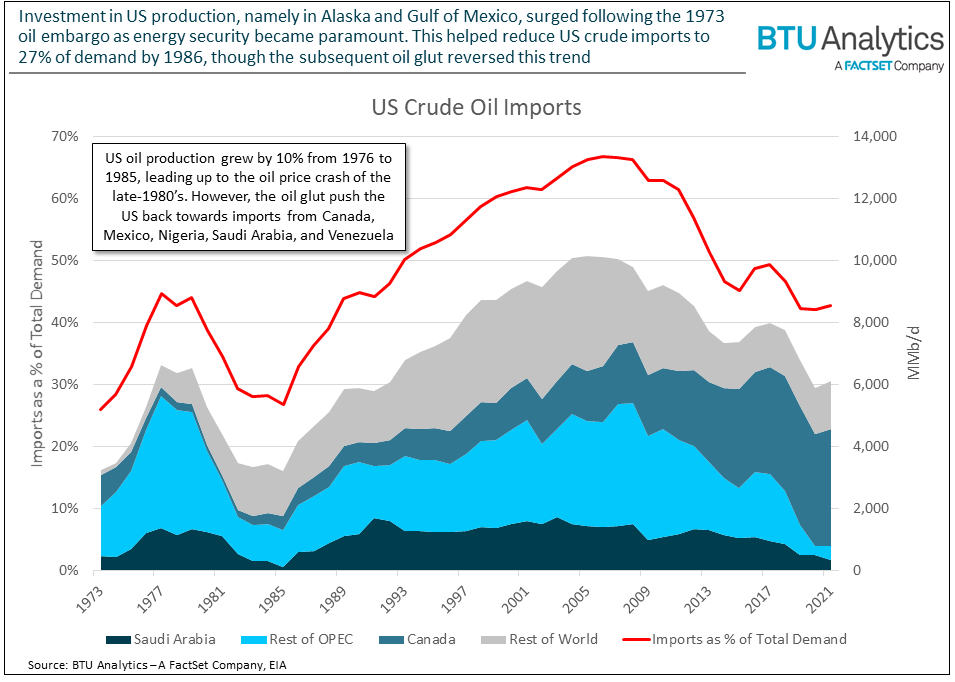 While the shifting supply dynamics of the early 1980s and focus on U.S. energy security largely lasted until the economic benefits of imports outweighed the political risks, the impacts on consumers were much more pervasive. Every country targeted by the embargo enacted some form of fuel rationing, whether for gasoline, electricity, or heating, among others. The Netherlands even imposed prison sentences for those who used more than their ration of electricity.

The oil embargo also kicked off a massive shift in the U.S. automotive industry, away from heavier, gas-guzzling cars to compact, four-cylinder engines featured in Japanese and European-made cars. American automakers responded in kind, and the average fuel economy in the U.S. improved by nearly 30% from 1970 to 1985.

The embargo also helped inch along conservation efforts and alternative energy, with legislation for fuel economy, home weatherization assistance programs, and a rise in interest in nuclear and renewable power. Jimmy Carter even installed solar panels on the White House in 1979 during the second oil crisis, though Ronald Reagan famously took them down on his first day in office.

Long-Term Impacts of a Developing Supply Shock in Europe

As we discussed last week, the European Union’s (EU’s) dependence on Russian natural gas is far too large to replace in short order. As shown in the chart below, the EU has seen its share of imports from Russia increase over the past decade due to rising German demand. On the other hand, U.S. imports from Russia have been relatively minuscule, averaging just 1.7 Bcf/d in 2021.

While shipments of liquified natural gas (LNG) from the U.S. to Europe have ballooned to more than 8 Bcf/d in recent months, sustaining that level is expected to prove difficult given the global shortage of natural gas, even with the recent LNG deal between the U.S. and European Union. Even partially replacing Russia’s 15 Bcf/d of natural gas exports to the EU will take time. BTU Analytics expects that flows of natural gas to U.S. LNG facilities will grow by roughly 6 Bcf/d from 2022 to 2027, but that growth will be choppy. While Australia and Qatar could also see LNG export growth, those existing facilities are also currently flowing near capacity. 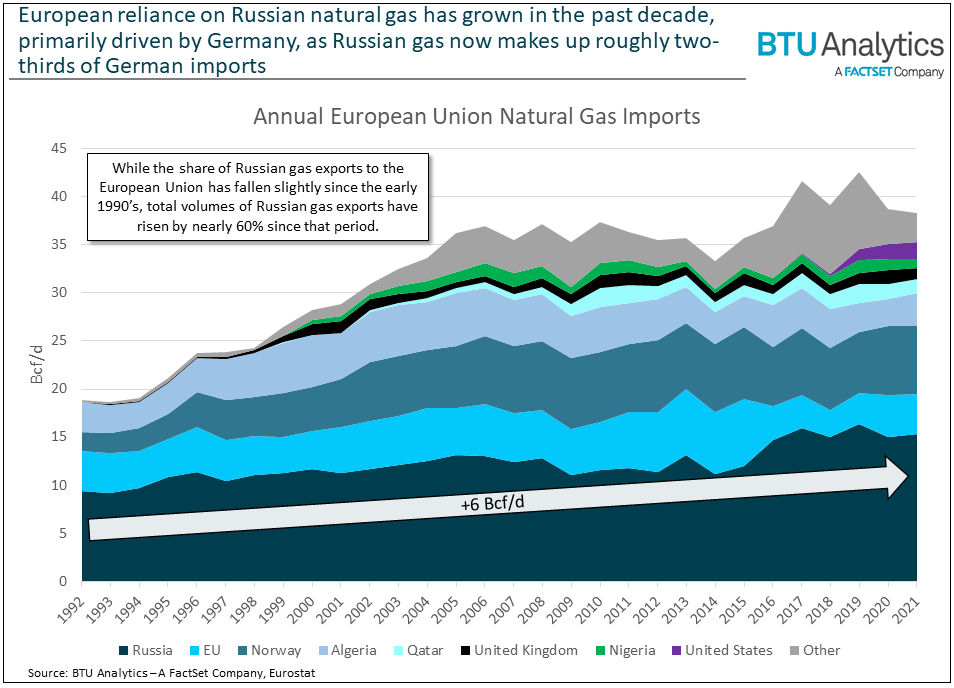 While Russian natural gas may prove difficult to fully replace, the group is also planning to decrease demand for the fuel as a whole and become independent of Russian fossil fuels by 2030. This would be an acceleration from the EU’s previous “Fit for 55” plan, which aimed to cut emissions by at least 55% by 2030. The EU’s plans to reduce dependence on fossil fuels, in general, are expected to reduce natural gas consumption by 9.7 Bcf/d by 2030, representing nearly two-thirds of Russian gas imports. While the European Commission has highlighted increased biomethane and hydrogen and improved fuel efficiencies as one part of this plan, a faster transition towards electrification and renewables appears chief among these.

According to the EU plan, increasing the deployment of wind and solar development (including solar rooftops) alone is expected to replace 2.2 Bcf/d of natural gas by the end of 2022. This could prove difficult, though, given the well-documented supply chain issues that have persisted due to the COVID-19 pandemic. Additionally, Russia is a significant producer of materials necessary for renewables development, like nickel, copper, palladium, and aluminum, among others.

Sudden shocks to commodity markets, like those during the 1973 oil embargo or the developing conflict in Ukraine today, have driven a rethinking of supply security as well as a kickstart to long-lasting shifts in demand. However, as political risks dissipate, supply has historically reverted to the most efficient trade routes and supply sources. While sharp shocks at the global scale can ignite lasting change in consumer behavior, those behaviors can stagnate during lengthy periods of cheap energy. The Russia-Ukraine conflict appears to be ushering in a faster transition away from fossil fuels in Europe, and the rest of the world is watching.