Back in January and February, a number of S&P 500 companies commented (during their earnings calls for the fourth quarter) on potential changes to government policies due to the election of Donald Trump as president. Six months in, have companies in the S&P 500 continued to comment on the Trump administration during their earnings conference calls for the second quarter?

The decline in “Trump” citations over the past six months may be a sign that corporations are less confident today relative to the start of the year that the policies proposed by President Trump will be enacted in the near future. 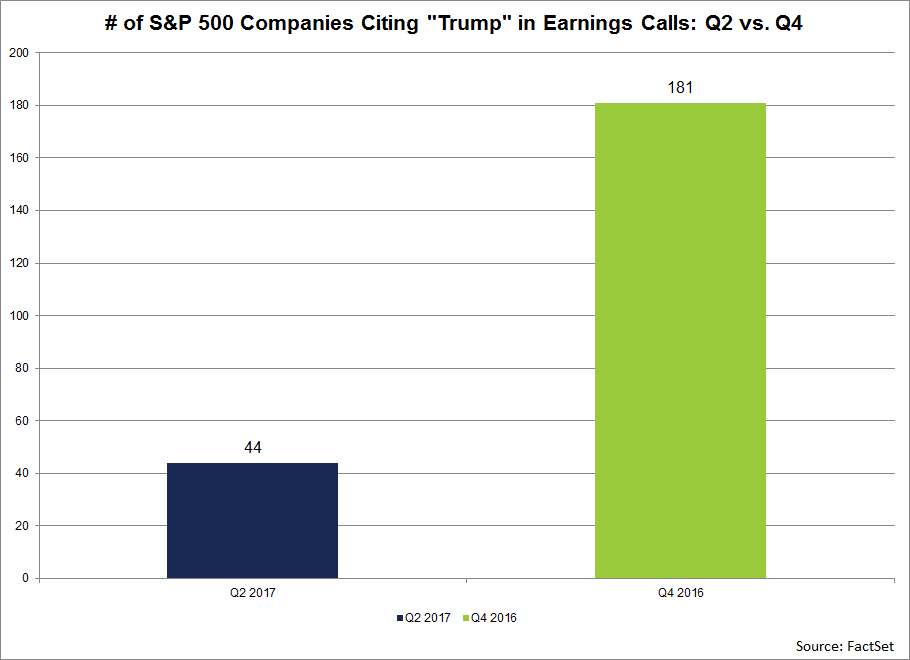 The following are excerpts from earnings calls through August 2.

“There is an expectation that indeed the new administration will launch critical reforms in order to boost the business and the economic growth. And this economic reform probably, I would set—the one which are the most important, the healthcare reform, the tax reform, the trade reform, and anything linked to the infrastructure investments. [. . .] The fact of the matter is that would—I would say this to be honest, three months ago, because just reading the observers and all the analyses, we believe that these four reforms would happen reasonably rapidly in the U.S. And fact of the matter, they are not yet being announced or executed, and so we are in this zone where the business is still waiting.” –Accenture (June 22)

“Investor psyche remains fragile. The same questions that lingered around timing and achievability of the administration's policy initiatives at the end of the first quarter remain unresolved as we enter the third quarter.” –Morgan Stanley (July 19)

“There was, I guess, the Trump bump and that has waned a little bit as you've had all the gridlock that you've had in the Capitol. And the simple things that they said they were going to focus on and the difficult things they said that they were going to focus on haven't really materialized. [. . .] There's nobody who can look out two or three years at this point and say with certainty that they're going to know what tax policy is, what healthcare costs are going to be.” –Omnicom Group (July 20) 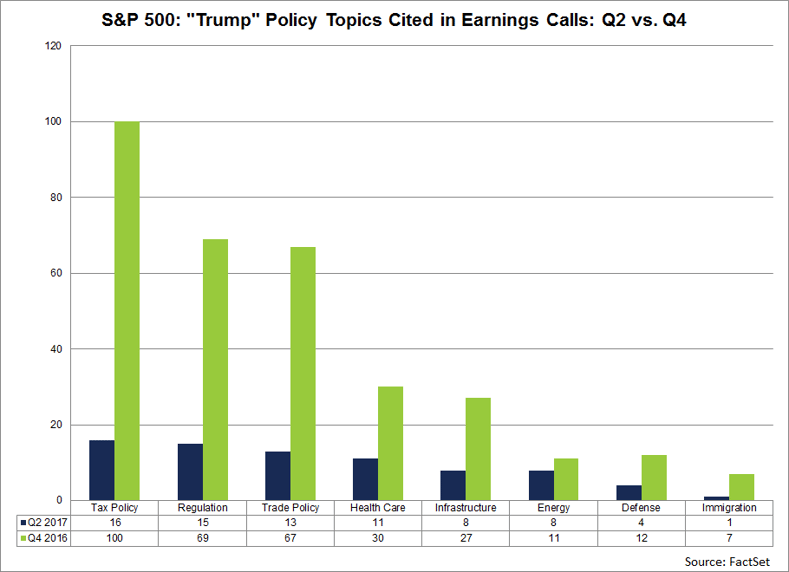 Please note that companies that cited or discussed a potential border tariff or tax were counted under “Trade Policy” and not “Tax Policy” in the chart. Please also note the numbers in the policy chart will not total to the overall company numbers for each period, as a number of companies discussed multiples policy topics, while others did not discuss any specific policy topics.

Even though fewer S&P 500 companies are discussing the Trump administration and policies on earnings calls for Q2, a number of the companies that have discussed the Trump administration during earnings calls for Q2 have made positive comments about the actual or potential benefits of the policy changes on their businesses and the economy as a whole.

“It's hurting the average American that we don't have these right policies. And so no, in spite of gridlock, we'll grow at maybe 1.5% or 2%. I don't buy the argument that we'll relegated to this forever. We're not, if this administration can make breakthroughs in taxes and infrastructure, regulatory reform.” –JPMorgan Chase (July 14)

“In terms of our interactions with the U.S. administration, we're pleased that senior officials are continuing to listen to business leaders when considering the impacts of legislation, and we'll continue to participate in these conversations as well as those with other world leaders to make sure our voices are heard on these vital issues. In fact, I'm here in Washington, D.C. today meeting with U.S. and global leaders, driving forward discussions on the important issues impacting healthcare today.” –Johnson & Johnson (July 18)

“U.S. corporate taxes are too high. If the administration and Congress can achieve a sensible realignment of tax rates with other major developed economies, then that would be a clear positive for our business and corporate America in general.” –Morgan Stanley (July 19)

“We're seeing a much greater interest by officials in the U.S. government in this administration to be supportive of businesses generally, but particularly, our situation in Indonesia.” –Freeport-McMoRan (July 25)