Europe has been hit hard by the rapid global spread of the COVID-19 novel coronavirus, with many countries under lockdown for the last several weeks. With businesses shuttered and residents staying home, we know that the economic impact will be severe. However, due to the lag in official economic statistics, our ability to measure the economic impact is delayed. Let’s consider what European data we currently have, what is still coming in, and the current growth forecasts.

As economists struggle to quantify the economic impact of the strict lockdown measures instituted to slow the spread of the virus, the forecasts are growing grimmer by the day. As shown in the chart below, things look bleak for Europe’s largest economies. As an early epicenter of the virus, Italy is expected to suffer most, with a current median real GDP growth forecast of -6.5% in 2020. The Italian economy had already stalled in 2019, growing just 0.3% for the year, the slowest economic expansion in all of Europe. 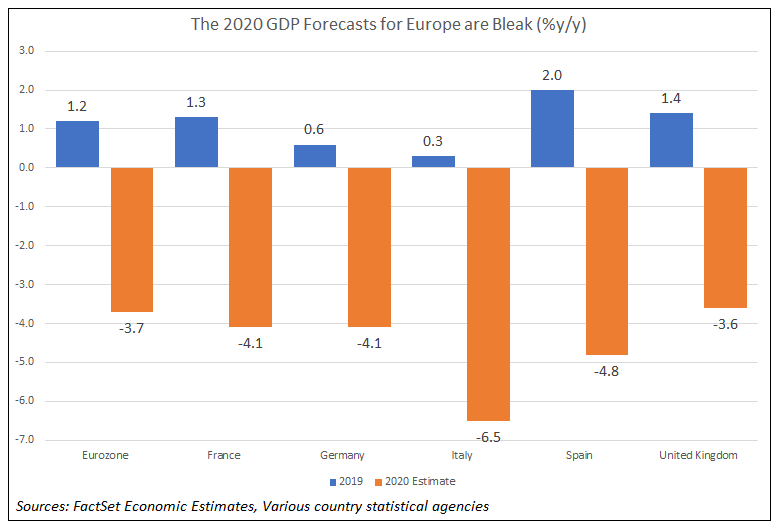 Just five months ago, we were concerned about the impact on Eurozone’s export-intensive manufacturing sector from increased global trade tensions, a slowdown in global demand, and Brexit. However, as shown in the chart below, now it is the services sector that is dragging down economic sentiment. Purchasing manager index (PMI) readings for the Eurozone declined in March for both manufacturing and services, but the services PMI fell to a record low in the nearly 22-year history of the series. The services PMI fell from 52.6 in February to 26.4 in March; at the same time, the manufacturing PMI dipped further into contraction territory, falling from 49.2 in February to 44.5 in March. These two declines led to a sharp decline in the composite PMI, which fell from 51.6 in February to 29.7 in March, a new low for this indicator as well. A PMI reading above 50 indicates expansion while a reading below 50 indicates contraction.

According to the March IFO business survey, German auto manufacturers’ expectations for exports in the next three months plummeted to -42.7 from -17.3 in February. This is the lowest reading since 2009 and the biggest one-month drop in sentiment since December 2008. In February, export pessimism was largely focused on the impact of the coronavirus on Chinese demand for German autos. But with German automakers announcing production cuts across Europe in March and demand plummeting worldwide, export prospects look increasingly dismal. 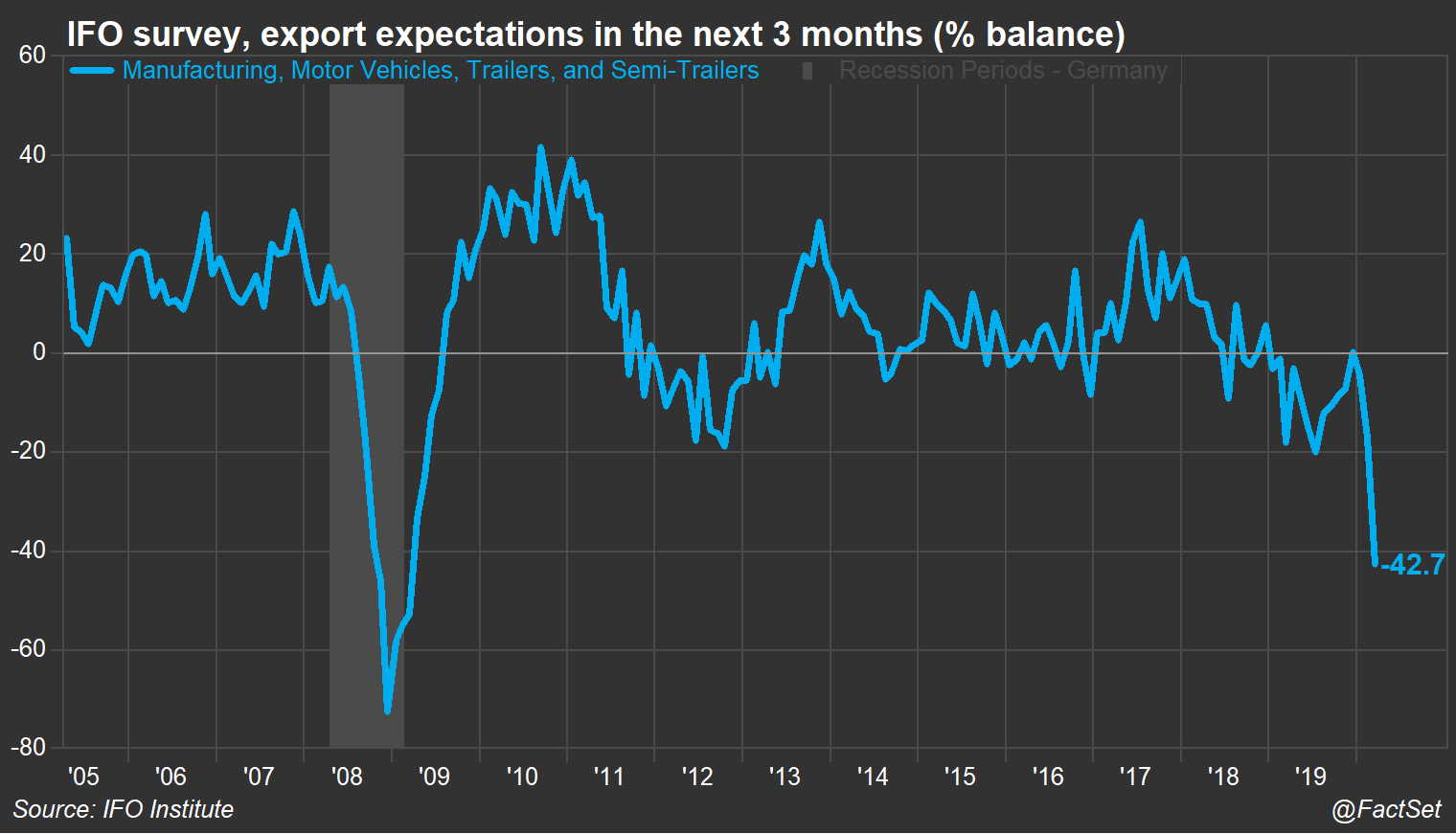 With all non-essential shops ordered closed in the UK in late March, retail sentiment has turned negative and is likely to worsen. According to Eurostat, the survey of expected business conditions for retailers fell to -23.9 in March, its lowest level since November 2011. Even before the impact of the coronavirus spread to Europe, we saw an unexpected 0.3% month-over-month decline in retail sales in February. On a year-over-year (seasonally adjusted) basis February sales were flat, the worst performance in nearly seven years. According to the UK Office for National Statistics, “a small number of retailers suggested that online orders shipped from China were reduced because of the impact of COVID-19.”

Despite Italy’s continued economic problems, the services sector appeared to be holding up fairly well—until March. As COVID-19 cases skyrocketed in Italy in March, the government responded with emergency shutdowns of all businesses to contain the virus and “flatten the curve.” March PMI data for the services sector reflects the economic closures with the IHS Markit headline services Business Activity Index falling to 17.4 from 52.1 in February, its lowest reading in the 22-year history of the series. The survey’s New Business Index was hit even harder, dropping 38.4 points from February’s 52.2 reading to a new low of 13.8 in March. In March, all components in the PMI Services report went below 50, indicating contraction across the board and a grim outlook for the coming months.