Roughly two years ago I wrote about the spread between investment grade (IG) and high yield (HY) rated bonds. Specifically, I covered the difference in spread between BBB and BB rated bonds. At that time, this spread was very minimal and only 80 basis points (BP), indicating there was just a very small difference in perceived credit risk between IG and HY bonds. I figured it would be interesting to see whether this remains the case in the age of COVID-19.

Last time we established that over the last century, BBB as a percentage of total IG debt, has increased significantly. We can see that over the last two years BBB has stabilized, but single A’s have increased at the expense of AA’s. Only 9% of the total outstanding debt now has a rating of AA and above, the rest is either A or BBB. This would have been considered reasonably safe two months ago, but that might not necessarily be the case anymore today. 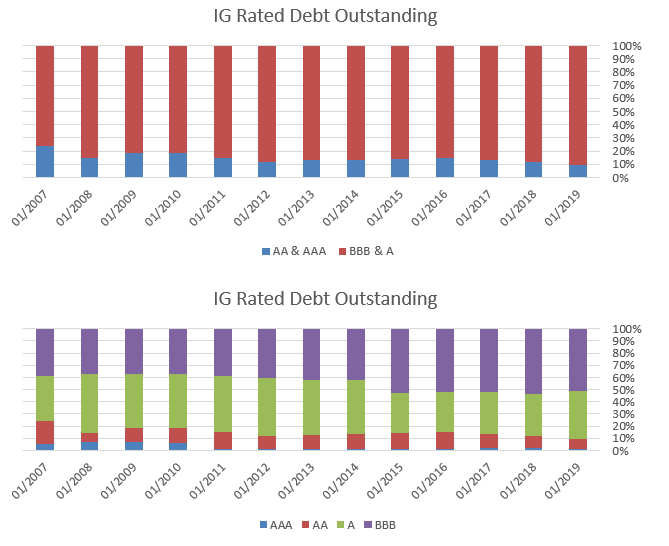 The amount of debt outstanding gives a good idea of the size of the market, but it’s also important to look at when this debt is due. Companies with shorter maturity debt may be forced to refinance when yields are high and will be in a worse position than those that can choose to sit out a crisis. This was not much of a worry for companies before COVID-19 shook the markets and yields were at an all-time low, but this has changed significantly over the last couple of weeks.

In charts 3 and 4, we’re analyzing the historical maturity breakdowns of the BBB and BB rating buckets. For BBB’s, the largest portion of debt outstanding is in the 0-5 bucket and you can see that this has grown steadily over the last couple of years at the expense of the 5-10 bucket. For BB-rated bonds, the picture is a lot more diverse. There are few bonds issued with maturity over 10 years and the majority is in the 5-10 range. In BB we see the same trend as in BBB though, where the 0-5’s have steadily increased over time.

Spreads Narrowed, Then Blew Out

While the spread between investment grade and high yield debt was only 80BP as of two years ago, it tightened even further to only 50BP as early as November 2019 (see Chart 5). From December 2019 on, this difference almost doubled each month to a total of 360BP on March 24 as COVID-19 and oil prices sent stock and bond markets tumbling. The last time we saw the difference between IG and HY this high was in July 2009, back when I began my professional career at FactSet and markets were recovering from another crisis.

In chart 6, we can see the absolute spread levels of BB and BBB during the recent pandemic. BBB increased by 128% from 160 to 365BP and BB increased from 332 to 684BP, an increase of 106%. It is too early to say, but expectations are that default rates will increase significantly and a lot of BBB-rated debt will be downgraded to BB or below. Close attention to spread levels is required to assess what market participants think about the creditworthiness of each issuer.

A Tale of Three Sectors

So which sectors were hit the hardest? Finance companies, Energy, and some Agency bonds (Owned No Guarantee) are looking the worst in BBB with increases ranging from 2x to 4x of beginning OAS. Energy, Transportation, and REITs have been hit the hardest within the BB segment. Note that downgrades are accounted for in the below charts. Energy companies like QEP, Antero, and Nabors started at BB but got downgraded to B during the last couple of weeks. These companies do not contribute to the 4/6 OAS in chart 8. This makes the spike in some industries particularly worrying, as it shows that there are still plenty of candidates for downgrades left.

Which names should we be on the lookout for? There are many ways to look at this but we choose to look at the movement in OAS from March until today. Using that metric, we find 44 issuers in BBB and 72 in BB with an OAS change of over 500BP that have, on average, not been downgraded yet. We’ll look at the top 10 in each credit bucket in charts 9 and 10. Both BBB and BB show mainly Energy, Finance, REITs, and Transportation companies.

Chart 9 & 10 – Potential Downgrades by Looking at Movement in OAS 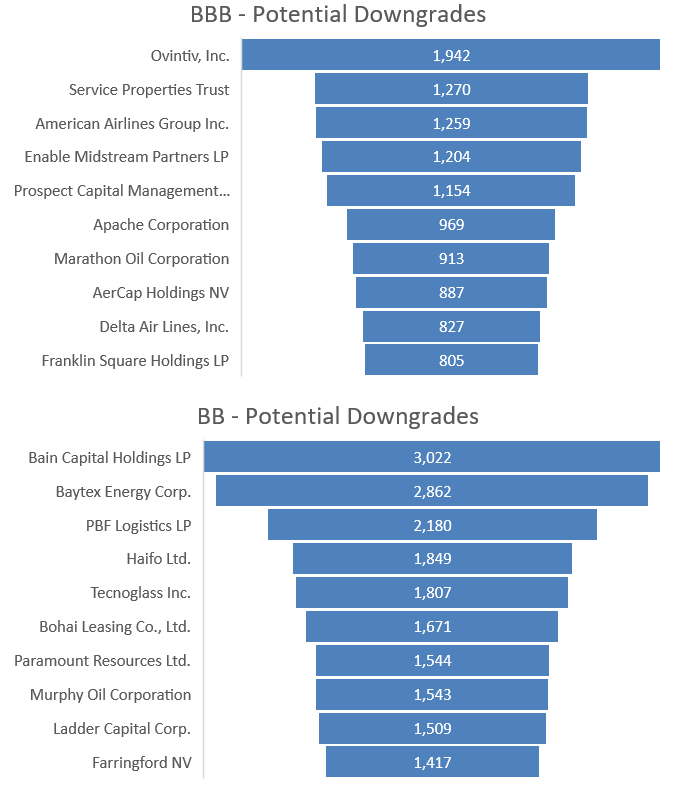 Keep in mind that an issuer like Delta has been downgraded by S&P, yet not by Moody’s & Fitch (see Chart 11). Investment Grade managers that are mandated to use the lowest of the three main rating agencies will already see Delta as high yield and may need to remove it from their portfolios; managers that use an average of all vendors could potentially still hold this in their portfolios.

Another metric to look out for is the amount of total outstanding debt as a percentage of the total that needs to be refinanced within a year. While looking across BBB and BB, we see 51 and 14 issuers respectively where 25% or more of the total debt outstanding is due within a year. All these issuers will likely face increased costs if they must refinance (or refi for short) some of their debt. Charts 12 and 13 highlight some of the issuers across the two rating buckets with the largest amount of debt as a percent of total that needs to be refinanced within a year. It would be wise to look into their debt capital structure to see how this would affect their future ability to pay off that debt. 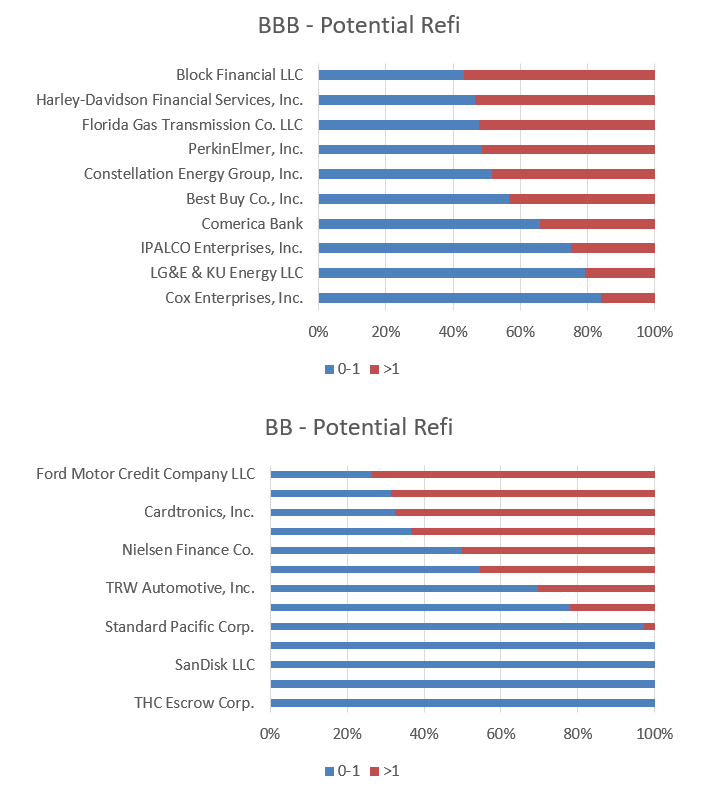 If this article had been written three months ago, the tone would have been completely different. I would have pointed out how investors are only getting marginally rewarded for venturing into high yield territory, and how credit in investment-grade space is deteriorating when looking at historical levels.

But none of that happened; credit spreads have blown out the last couple of weeks as everyone is trying to get their head around the impact of COVID-19 and historically low oil prices. The difference between IG and HY has risen by over 400% since my last article. Now is the time to critically assess the credit characteristics of the issuers in your portfolio and determine whether the risk is worth the reward. I’m worried we’ll see more fallen angels then we want!

Mr. Oliver Verburg is the Regional Director of Analytics at FactSet for the Western region of the United States. In this role, he manages a team of specialists that are responsible for selling FactSet’s Analytics solutions. He joined FactSet as a consultant in 2009 in Amsterdam, moved to FactSet’s Frankfurt office in 2012 to eventually join the Fixed Income Analytics team, and in 2016 joined FactSet’s San Francisco office where he began as a manager for the Fixed Income Analytics team. Over the years he has worked with a large variety of FactSet’s clients, most being in the institutional, wealth, and pension space. Mr. Verburg has earned an MSc in Finance from Vrije Universiteit Amsterdam and is a CFA and CIPM charterholder.