This summer has put the power grid to the test with heat waves stretching from California to New England and everywhere in between. Temperatures that have been growing more extreme and unpredictable were met with a grid that has never been more intermittent. Over the last five years, US wind and solar generation has grown from 7% to nearly 15% at the start of this summer. But what do the years ahead look like? In today’s Energy Market Insight, we’ll look at how the capacity mix across the US’ seven ISOs is expected to change in the near future.

Two steady drumbeats have been sounding in power markets over the last several years: coal-fired power plant retirements and increased wind and solar capacity. The graphic below addresses the first. Over the past decade, coal plants have seen a steady decline in the US’ capacity mix. That trend has been bucked this year via delays to coal plant retirements, as we have discussed previously. However, unless carbon capture and sequestration (CCS) credits in the Inflation Reduction Act (IRA) can make coal plants whole (see San Juan Generation Station), then those delays will only be temporary. 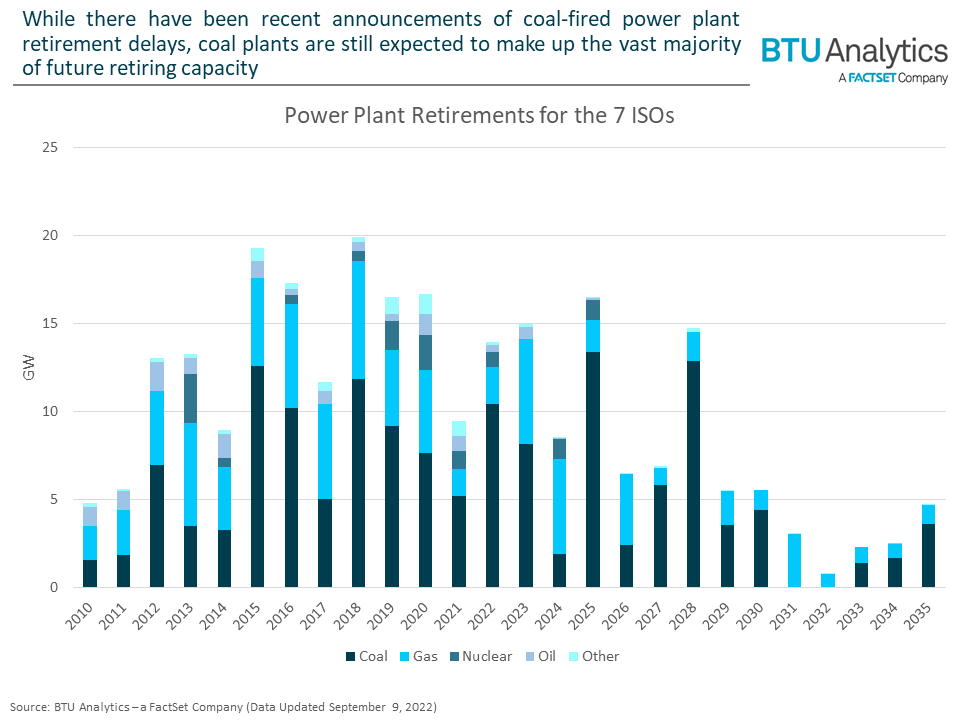 What about new capacity coming online? We can look to the generation interconnection queues for the US’ seven ISOs to gain some insight there. In the US, energy projects around the country must apply to their respective grid operators to connect future projects. As seen in the graph below, applications for solar and battery storage have been trending upward in recent years, while wind applications have fallen. 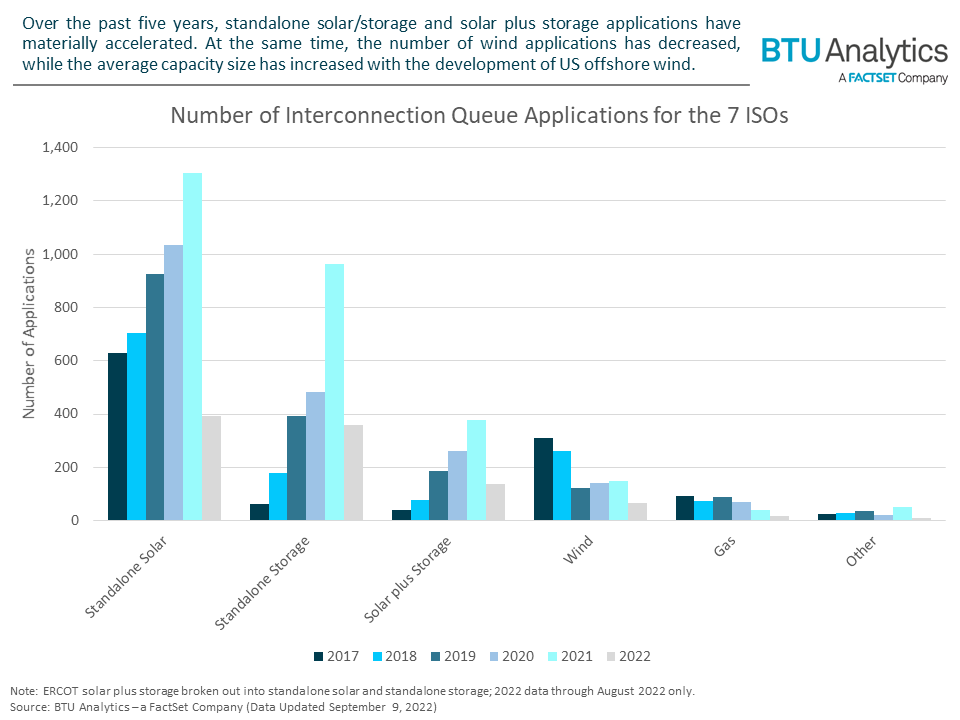 As most will likely point out, looking solely at these queues is a flawed approach. Generation queues are riddled with duplicative applications, extremely speculative applications, and other issues that distort a forward-looking capacity view. For example, Community Offshore Wind has filed multiple applications for interconnection, yet the project is still in its early stages and the exact interconnection point remains unclear.

To cut through the noise in the generation queues, BTU developed the Power View, which vets and then applies a quantitative risking metric to provide a view of firm capacity additions. Instead of taking purely what is in the generation queues, we’ll now look at our risked capacity view and combine that with retirements in the seven ISOs to arrive at expected capacity mixes. The map below shows current capacity mixes for the seven ISOs as well as their expected mixes two years out.

With the signing of the IRA, which expands incentives for renewables and storage, the fuel mixes above are likely conservative. Storage will act as a counterbalance to intermittency; however, the next few years will see a continuation of the US’ power transformation and growing pains, as storage will take time to build. In the longer term, all eyes will turn towards the next pain point: transmission. Check back for additional Insights around transmission and other topics as permitting reform moves (or doesn’t move) forward. 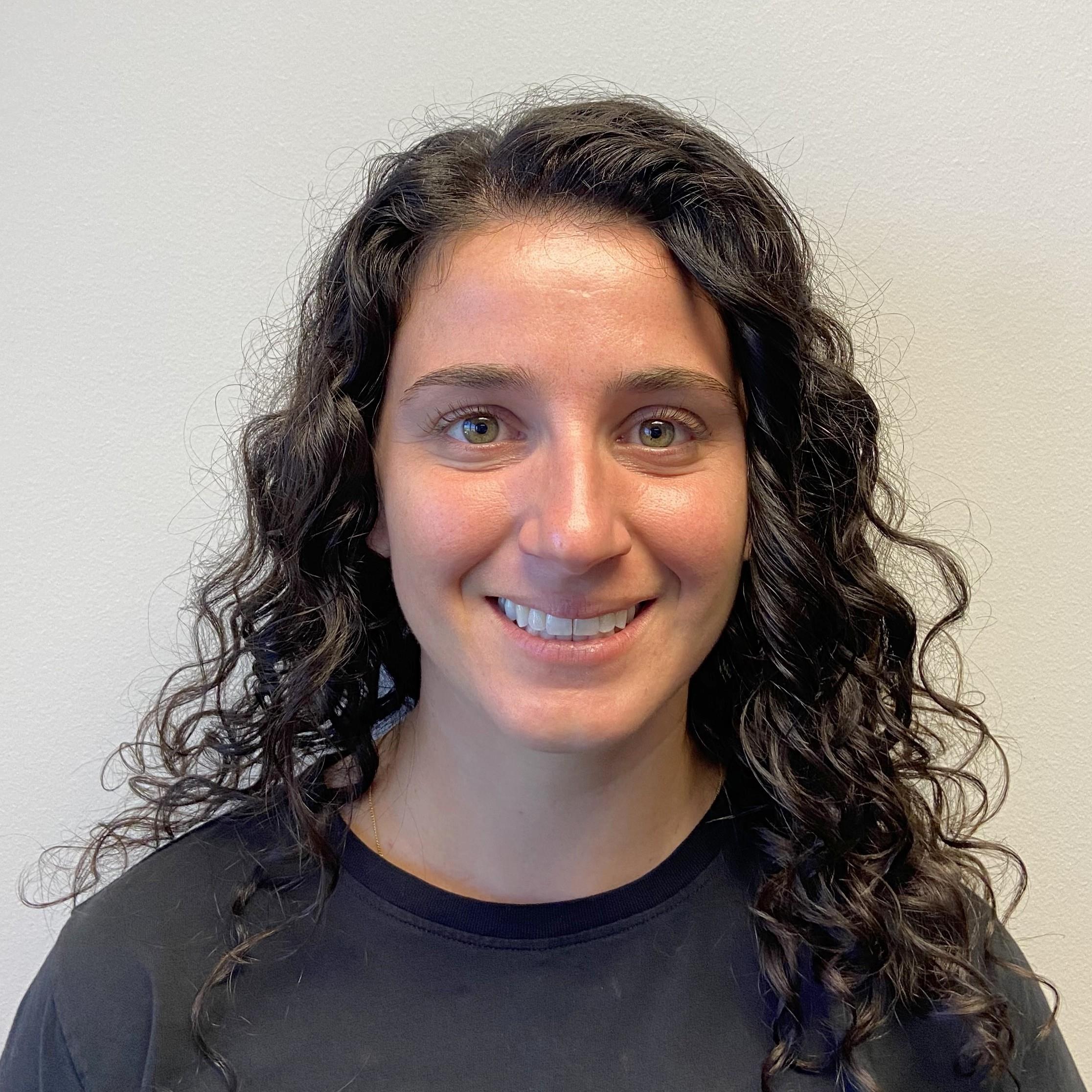 The passage in August of the Inflation Reduction Act (IRA) includes $369 billion over ten years to expand the use of electric...