The current struggle for investors is to find exposure to growth without paying through the nose for it. It becomes increasingly difficult to satisfy that objective when the economy is trying to come out of a recession and interest rates are 0. The combination of the two creates high levels of liquidity and a high demand for growth at any cost, which consequently drives up the valuations in growth-oriented companies and sectors. This can leave investors susceptible when the market begins to correct.

This type of valuation risk was highlighted in an academic white paper by Saint Joseph’s University professors, Morris Danielson and Amy Lipton, “Are Some Stock Prices Destined to Fall?” In that paper, the authors present a valuation formula to determine how much a company needs to grow their sales and by what length of time to justifiably grow into their current price to sales multiple. One example of a security that has run up with a vengeance in light of the current environment has been Zoom Video (ZM). As of August 31, 2020, ZM had a price-to-sales ratio of 115.78. Below is a chart that shows how much ZM needs to grow their revenues on an annualized basis over various durations, based on an assumption of a 9% market return, its current gross margin, and its current price-to-sales ratio.

Source: Data from FactSet Research Systems. Computation based on a formula from “Are Some Stock Prices Destined to Fall?” by Amy Lipton and Morris Danielson

Many markets “experts” compare the current valuation run-up to the tech bubble of the mid to late 1990s. However, there are two distinct differences: there was no economic recession at that time, and interest rates were not only well above 0 but the Federal Reserve was increasing interest rates. The one commonality between the two periods is the perception of the addressable market for these growth companies. During the technology bubble of the mid to late 1990s, there were enormous investments that poured into software and internet-oriented securities. This was spawned from the evolution of computers, which began as utilities that manufacture and process information, to an interactive database to communicate information and ideas worldwide. Throughout the 1990s, the household usage of computers and the internet continued to increase according to the U.S. Department of Labor, which led to a perception from investors that the addressable market for internet and software was so exponential that it was worth trading a multiple of 10 times or greater than its current trailing 12-month sales.

The end result from the tech bubble was a realization that the revenue and earnings growth from those companies could not achieve the levels investors had hoped for. This led to bankruptcies, consolidations, or purgatory for many of these run-up companies. We believe the reasons for this are that the perceived addressable market was not as robust as projected and the increased competition in the sector diluted the impact for any single company to have and sustain the growth level necessary to justify the frothy valuation levels. Collectively, those companies greatly underperformed in the short and medium term following the peak levels of the 1990 tech bubble. Below is a series of charts showing the returns of the companies in the S&P 500 Growth Index that reached a multiple of 10 times sales or higher as of December 31, 1999, vs. the S&P 500 Growth Index as a whole vs. companies in the S&P 500 Growth Index with a multiple of less than 10 times sales as of December 31, 1999. 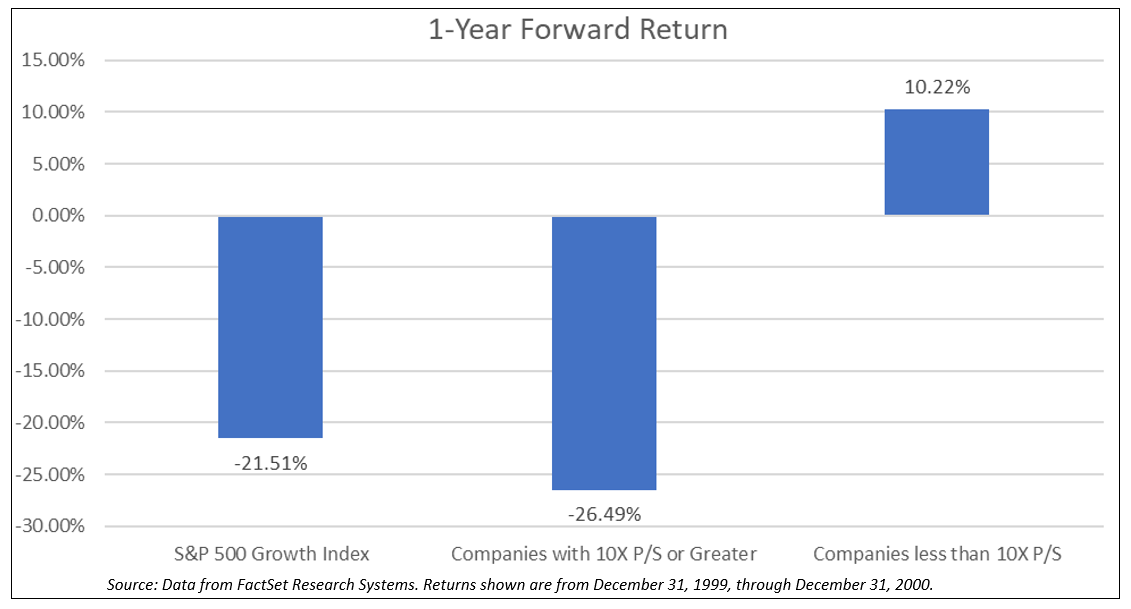 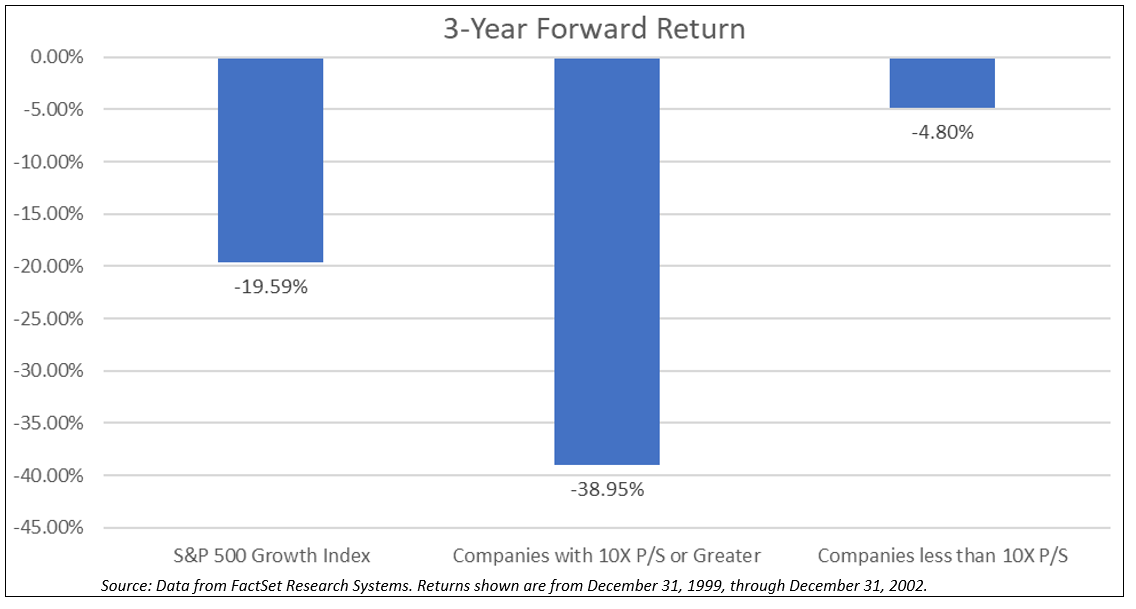 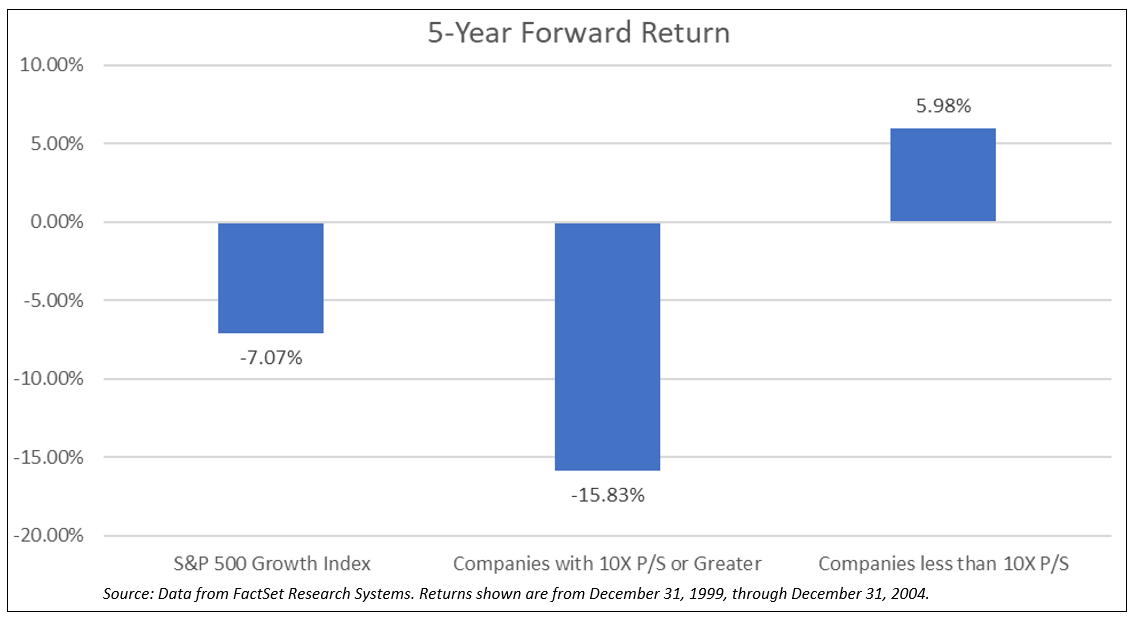 As you can see from the charts above, the securities with high multiples were unable to recover to their highs of December 31, 1999, which led to an overall drag on the S&P 500 Growth Index. We believe the catalyst for the bubble burst was a financial unraveling of these securities that could not financially survive after not meeting their lofty growth expectations. We believe this then led to a domino effect in the sector as a whole and ultimately found the U.S. economy in an economic recession.

This is not dissimilar from today’s phenomenon with growth-oriented securities. In fact, as of August 31, 2020, there were twice as many securities in the S&P 500 Growth Index with price-to-sales multiples of 10 or greater (48) than there were on December 31, 1999 (24), according to FactSet data. The disruption and human behavioral changes that have resulted from the global health pandemic, as well as damaging natural disasters that are believed to be a result of climate change associated with greenhouse gas emissions, have led to a high demand and a perceived infinite addressable market in technology securities that enable a virtual lifestyle and electric vehicles, respectively.

Like the tech bubble, there appears to be no adherence to current valuation multiples on the prospect of exponential growth from a rising addressable market. However, the headwind to these companies is not just the prospect of competition but also the prospect of an economic recovery and an eradication of the public health pandemic. As beaten-up industries from this recession, such as travel and leisure, begin to reap the benefits of an end to COVID-19 related restrictions, their financial health prospects will increase, making them a viable investment. We believe that this would not only lead to a reallocation in the stock market, leading to a correction in the overbought names, but it also would mean that consumers will be less inclined to purchase virtual-related products and instead spend on things such as travel and leisure once again, which would ultimately limit the addressable market for the virtual-related securities, such as the aforementioned Zoom Video.

At Global Beta, we encourage advisors, investors, and institutions to seriously consider the valuations they pay for their investment mandate, even if it is growth oriented. There are sections of the market that offer quality levels of growth without the prospect of astronomical growth requirements, and Global Beta builds our strategies to seek proper exposure at an appropriate price. If investors are looking for growth, we believe it is important to begin to look at emerging growth securities that may have a mid to small market capitalization. These types of companies generally have better valuations and can be future leaders in their space. We believe that investors positioning themselves accordingly leads to the prospect of higher probability of forward-looking returns.

Global Beta ETFs has collaborated with FactSet to provide the Global Beta Rising Stars ETF (GBGR), which seeks to track the performance of the FactSet Rising Stars Index.

This article originally appeared on globalbetaadvisors.com.

This blog post has been written by a third-party contributor and does not necessarily reflect the opinion of FactSet. The information in this report is not investment advice.

Linking memorable quotes and moments from the original Top Gun movie to global fixed-income markets in 2022.