Global capital markets have shown considerable improvement since the Global Financial Crisis. With a stream of unicorns lining up to list, 2020 was on track to register a solid year for initial public offerings (IPOs). However, due to the COVID-19 pandemic, 2020 is likely to see the worst activity in four years.

IPO Activity Fell Around the World in H1 2020

The first six months of 2020 (H1 2020) recorded 299 IPOs globally according to FactSet data, accumulating a total of $64.5 billion in gross proceeds. Respectively, this is 34.9% (transactions) and 18.0% (gross proceeds) lower than the same period in 2019 (H1 2019), which saw 459 securities listed generating $78.6 billion in gross proceeds. This was only the second time in a decade that all three of the largest IPOs were listed outside the U.S.—JD.com Inc. (Hong Kong), NetEase Inc. (Hong Kong), and JDE Peet’s BV (Euronext Amsterdam).

The slowdown in IPO activity was experienced around the world. Despite a 21.7% drop in the volume of offerings in H1 2020, the U.S. held onto its market share and retained the top spot in terms of gross proceeds. The ability of U.S. firms to raise significant funds in their IPOs is indicative of the favorable market reaction to monetary support from the Federal Reserve despite concerns surrounding election cycle volatility. The Fed introduced a $2.3 trillion lending package and target rate cuts totaling 150 bps in the first half of the year to support markets in the face of COVID-19.

Similar policy cuts and lending facilities set up by the People’s Bank of China helped China close the gap with the U.S. China increased its overall share of gross proceeds by 13.5% to 36.6%, surpassing both its gross proceeds and transactions tallies from last year. At the same time, Middle Eastern and European countries lost market share with Switzerland, Germany, and the United Arab Emirates dropping out of the top 10 in H1 2020.

Looking at sector activity, Technology Services suffered the biggest hit in H1 2020, losing 16.0% market share and with that its top spot. Respectively, gross proceeds and transactions dropped 62.5% and 37.5% compared to a year ago. This sector has been hurt by increased market uncertainty on top of a shift in investor focus away from a “growth at any cost” strategy towards a sustainable model with normalized profitability. The best example of this is U.S. company WeWork (The We Company), a shared office space company, which pulled its planned IPO in September 2019 in the face of intense scrutiny after reporting steep losses. Companies increasingly need to prove that they are well-run, have growing revenues, and will eventually turn a profit. 12.3% of the 6,688 companies included in FactSet’s Technology Services sector have not recorded positive annual net income even once in the last five years.

The Finance sector moved into the top spot in H1 2020 as gross proceeds rose 2.1% from a year ago despite fewer transactions. However, the Health Technology sector emerged as the major winner climbing to second place with a year-over-year increase of 92.4% in gross proceeds. Timing for the sector could not be better as firms across the world act to seize the opportunity presented by the search for therapeutics and a vaccine for COVID-19. SK Biopharmaceuticals (priced June 19, 2020) was the largest listing on the Korea Stock Exchange since 2017 (when Celltrion Healthcare debuted), raising close to $800 million. However, this huge market debut has fueled concerns about a bubble in the South Korean Health Technology sector. SK Biopharmaceuticals has returned 40.5% since listing, while Samsung BioLogics and Celltrion Healthcare returned 68.4% and 84.2%, respectively, year to date.

Volatile market conditions have made it increasingly challenging for issuers to time their listings. 112 firms withdrew or postponed their IPOs in H1 2020. Consequently, the proportion of issuers with a final offer price within or below their initial offer price range (as per filing) increased marginally from 87% to 89% compared to a year ago. This has further contributed to the conservative sentiment of issuers.

However, the volumes of fresh equity were well received by investors. 34.1% of issuers exercised over-allotment options this year, which is up from 30.9% this time last year. The optimism was shared across the secondary markets. Issues in H1 2020 generated 15.4% on their first trading day compared to 12.5% in H1 2019. Investors were happy to grab money left on the table through issuers’ conservative offer prices.

Given current market conditions, should issuers wait for markets to stabilize? At the same time, have investors been overly generous with their reception of new issues? A look into the quality of issuers relative to their local sector benchmarks illustrates the relative higher valuations awarded to this year’s listings compared to 2019. Asset coverage and cash flow availability is comparable to last year.

However, issuers opted to raise capital through equity dilution despite better leverage than last year’s issuers. This is especially interesting considering the fact that interest rates are at their lowest levels in years and we have seen stimulative monetary programs introduced by governments around the world during this crisis. The higher valuations could be justified by issuers’ ability to leverage assets to generate sales and in turn extract higher net income margins. Overall, despite lower numbers, issuers who tapped into capital markets in H1 2020 appear to have stronger financials than their peers from the previous year. 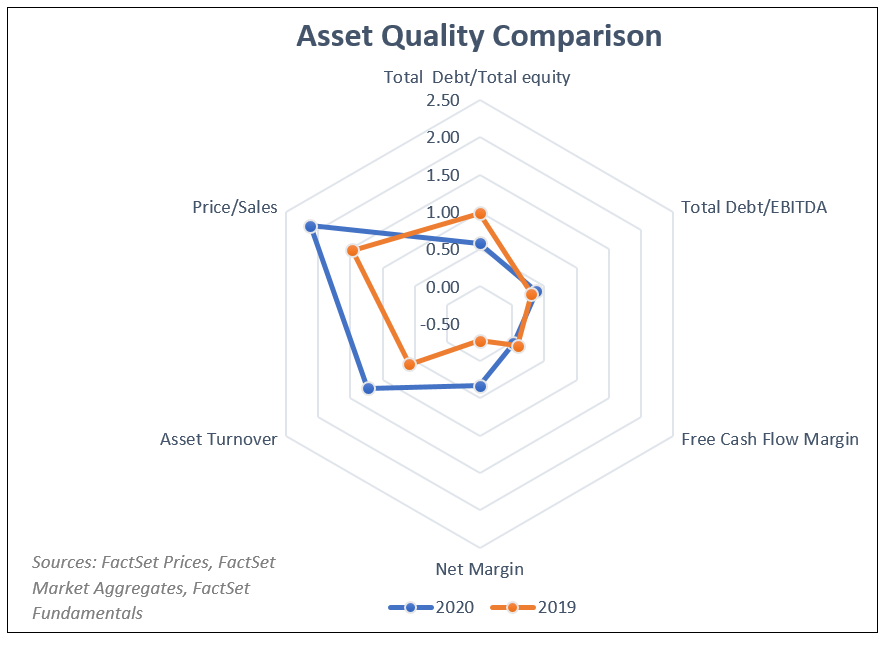 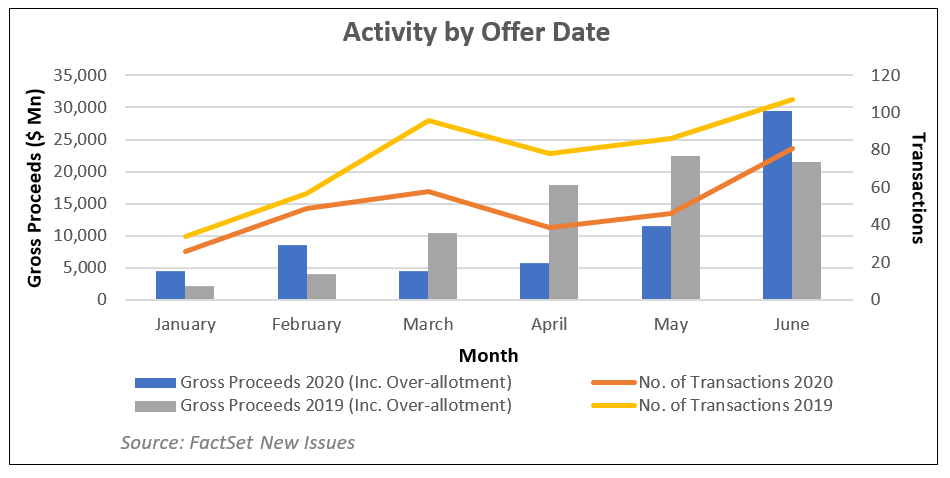 The capital markets have been off to a slow start this year, but they are showing signs of improvement. June 2020 was the fourth-best month in the last 15 years in terms of IPO gross proceeds. It will be interesting to see whether the markets can carry the momentum into the second half of the year or will signs of a second wave of COVID-19 cases further delay activity until next year.